On to new shores! 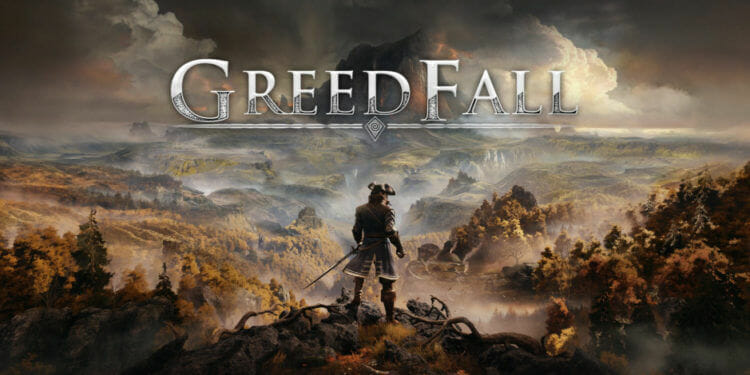 As a big fan of Western roleplaying games, I am disappointed this year. Where we had enough choice from RPGs in previous years, it has been relatively limited so far. But there is superb news! The small French developer Spiders, known from Bound by Flame and The Technomancer, released their newest game titled GreedFall. The question is, of course, whether the game takes full advantage of the scarcity of RPGs or whether it is going to undermine its ambitions. Here is my review!

In GreedFall you end up in a world that has gained much inspiration from the seventeenth century. Although this is peppered with the necessary fantasy elements. In the game, the world is plagued by a disease that is suspiciously similar to the Black Death, also known as the plague or as it is referred to here as the Malichor. The mother of the main character is also affected by this, but the newly discovered island of Teer Fradee offers some hope for a cure.

As Lord or Lady De Sadet you have to travel to the island to work as a diplomat for your faction, the Congregation of Merchants. In addition, you have to keep an eye out for your not too smart cousin, who will become governor of the city of New Serrene. 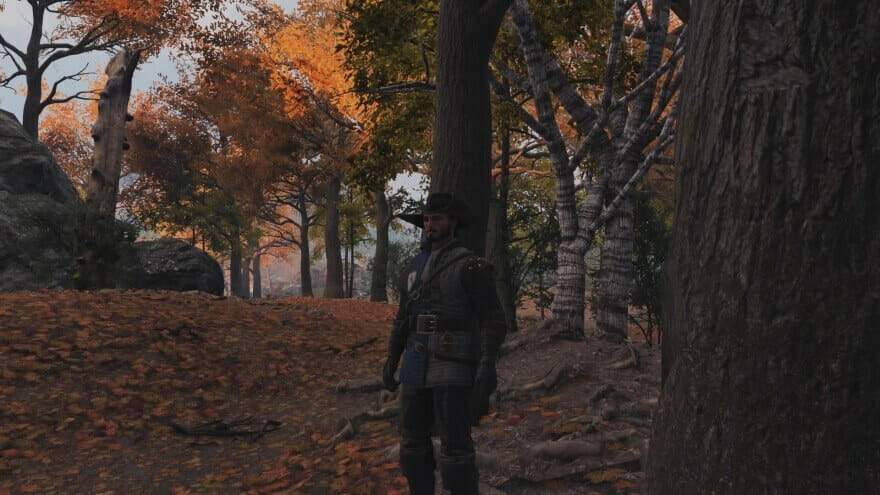 GreedFall has an original setting compared to other Western RPGs. Not a standard medieval fantasy world, but one based on the seventeenth century. You can see this mainly in the buildings and the clothing style, which made me think of Assassin’s Creed IV and Fable II. The game does not contain a large open world, but consists of different open regions that are connected to each other. A bit of Fable here too and I personally like this. The regions look particularly beautiful. It is definitely not the most beautiful RPG of this generation, but it all looks good and especially attractive.

There is something to be found everywhere. Whether it is a treasure chest, group of enemies or new side quest. The environments look great, but it is a shame that especially the interior of buildings is pretty recycled, which means that you regularly encounter them.

In addition to Assassin’s Creed and Fable, developer Spiders has also looked at the success of The Witcher III: Wild Hunt. For example, on the map you will see question marks with interesting places and here and there you can find skill altars that give you an extra skill point. 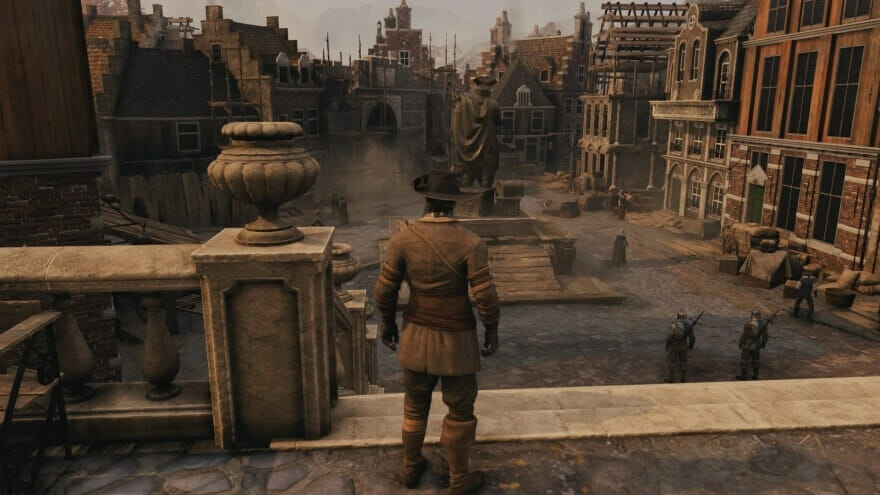 You start GreedFall by creating your character. The options are not huge, but diverse enough to create a unique character. As a good RPG agrees, you then choose a class, and in this case there are three: Warrior, Technical or Magic. A Warrior opts for two-handed swords and likes combat close by, while the Technical is more the rogue/archer who stays at a distance with firearms and places traps. The Magic classes are not entirely surprisingly specialized in magic.

The skill points are there to make your character’s attacks more powerful and to unlock new fighting options. Attribute points improve the general power and magic, and then there are the talent points. These are a lot more interesting because they unlock talents such as Lock picking, Science and Charisma. With this you can open doors and certain crates, blow up a wall for a secret passage and make potions, or convince other characters during conversations. It’s all well-known food for RPG fans, but it’s nice that there are enough choices to make your character your own.

In GreedFall you are a diplomat and the game focuses to a large extent on diplomacy. This is also necessary because there are several factions to keep as friends. In addition to your own Congregation of Merchants, there are five other factions to take into account. The Bridge Alliance consists of alchemists and wizards, the Coin Guard are soldiers, the highly religious Theleme try to convert everyone and the Nauts are rough sailors. The final faction consists of the Natives, the original elf-like residents of Teer Fradee, who are now slowly being locked in by their settlers on their island.

GreedFall leaves you free to deal with the factions. Put them against each other, help a specific faction, or keep peace between all. You can of course try to keep them all friends, but for that you have to lie regularly. And who knows, maybe this will bother you again later. Because diplomacy plays a major role in GreedFall, you are talking a lot with characters. The voice acting and the script are of a good level, but the lip sync is unfortunately painfully bad. The faces also look like they came from the previous generation. Personally, this did not bother me during the conversations, but it certainly stands out and they could have put a little more work into this. 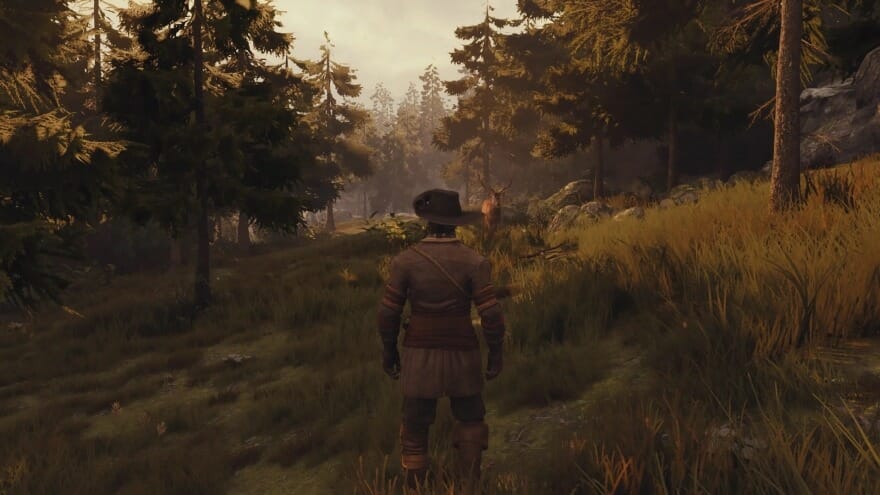 The diplomacy in GreedFall is one of the unique features of this game. Of course this has already been done in other RPGs, but I find the effect here at a higher level. This is partly due to the connection with the very nice quests. The game contains no standard fetch quests in which you have to retrieve a certain item and bring it back or kill ten spiders.

Every quest has its own story and has an influence on the relationship with the factions. Because of this, every choice you make during a simple side quest also influences the main story. The great thing about the quests is that they can be completed in multiple ways. Entering somewhere can be done by bribing the guards, supplying drink with sleeping pills or fighting them. If you prefer stealth, you can see if there is another entrance or go dressed as a member of the guards faction.

If diplomacy does not work, you end up fighting as fast as you can, no RPG can do without combat. Where the game with the world, diplomacy and quests excels, the combat is a bit of a disappointment. It is certainly not bad, but the fighting system looks somewhat woody. Think of the old Gothic games and the Risen series and you have a bit of an idea what I mean. This can be frustrating, especially at the beginning, because GreedFall is pretty tough. As you unlock new skills and get a stronger character, the combat gets better. Still, the animations make it look somewhat woody. What gives the combat some extras are the partners, each with their own fighting style. They assist you during battles with powerful attacks or medical skills. This way you will appreciate them even more during the adventure.

With GreedFall, Spiders wanted to deliver a large-scale and ambitious RPG, and they definitely succeeded. The game contains an original setting that draws inspiration from the seventeenth century and looks closely at a number of successful games. The biggest compliment goes to the diplomacy with the factions and the fine quests. Other developers can learn something from the latter in particular.

GreedFall is not entirely perfect due to the moderate faces and lip sync, and the somewhat disappointing combat. In addition, it does not help that the interiors of buildings are quite similar. Despite these negatives, the game is very successful, and this is the nicest Western RPG I have played since The Witcher III: Wild Hunt.

What the Golf? Review

How Are Gambling Movies Impacting the Popularity of Casino Games?