The battle of the new age Metroidvanias 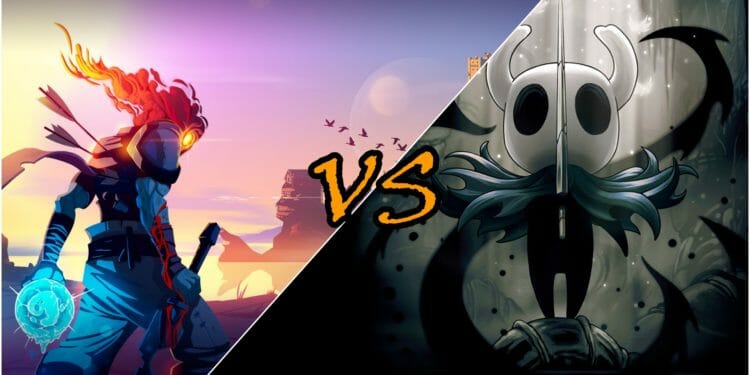 The Metroidvania genre has seen a glorious return to form in recent years. A decade ago we had the excellent Shadow Complex, other titles such as Ori and the Blind Forest, Guacamelee and the Strider Remake followed after and has only made the genre stronger in its return.

But two titles have left their mark on gamers for confidently and effectively reshaping the Metroidvania formula with interesting dynamics and compelling gameplay. Both are brilliant indie titles from passionate developers who have worked hard in developing their games over many years. These games are Dead Cells and Hollow Knight.

Both games are an enthralling combination of the Metroidvania formula and Souls-Bourne gameplay but each game as their own unique features. Dead Cells has fast paced action and thoughtful RPG elements that allow you to live, die, repeat and become stronger much like a Souls games.

This makes Dead Cells an intense and captivating experience which has a Metroidvania heart but an outer layer of something much more aggressive. Hollow Knight is regarded as one of the best games ever made with its slower pacing yet highly engaging gameplay.

Elements such as exploration is engrossing, the mystery is fascinating, the visual style beautiful and the combat while very simply is gripping. Both games are great but which one is better?

There’s only one way to found out, Clash!!

Both games have the Souls vibe that harshly tests the skills and patience of the player yet rewards them highly with loot and self-esteem (and also brutally destroys it). Each game though has its own approach to the structure of the game world and the overall pacing.

Hollow Knight takes the classic Metroidvania format yet changes around a few things to make it much more captivating. Instead of spelling things out clearly as older games would label what items you had to use to progress into new areas.

Hollow Knight allows players to figure it out for themselves and be reasonable for tracking points of interest. Classic Metroidvania games were actual pretty linear yet cleverly laid out items and keys in certain ways that meant backtracking felt more like natural exploration.

Hollow Knight does this efficiently and while there are multiple paths and areas you can visit without following the main path, you often are without knowing it.

However Dead Cells decides to shake things up massively and have you pretty much live out Ground-Hog day in a Metrovania game! It’s a great way to get players to advance their skills and gather pieces of the story through exploring multiple paths.

Dead Cells handles the live, die and repeat aspect very well. Players will chip away at the game through each retry and by developing their skills and gear, players will get through levels much more quickly and avoid any real grind that could’ve easily been there if the designers/developers were lacking in their craft.

But the trial and error, rinse and repeat format does restrict how you explore and repeating the levels over and over (even if randomly generated) does mean you’ll feel like you’ve been there, done that a little too much. Plus is it vastly more linear than Hollow Knight.

Hollow Knight is vastly epic with the scale of the world and how you discover each area makes you feel like a true adventurer. The sense of discovery and the pacing is very fluent and remains engaging throughout.

Dead Cells is very good and I appreciate that the developers have managed to avoid any sense of grind in journey. However I feel as though Hollow Knight’s 40 hour campaign offers a compelling journey, one that’s a slow burner but a meaningful one and with each passing minute, you’ll be gripped with new discoveries.

Hollow Knight wins this round!

This round we’re looking at how both games deal with combat, exploring the world and what death means in each game.

Hollow Knight’s combat is very simply with players going about that classic route in Metroidvania games of finding new gear and weapons throughout the journey.

It’s safe but a little generic and lacks any dynamics to make it truly interesting. Dead Cells on the other hand is truly adaptive and allows players to try out a range of tactics and weapons to succeed.

There’s little room to truly evolve the combat in Hollow Knight as it’s so restrictive. You obtain various badges which give you certain abilities and powers.

This is a great idea but you’re never given much room to combine badges or feel all that powerful as you can only equip a couple at once. It would’ve been nice to allow players to equip more or to simplify the way you do it.

Dead Cells has a great sense of freedom when it comes to combat and while you do have restrictions on how much you can equip, there’s more ease to pick up what you want and upgrade gear and weapons to become so much more powerful and combing items on their specs makes combat vastly more engaging and thoughtful.

Hollow Knight is vastly more engaging as you spend more time in the world and learn about it in much more detail. Dead Cells has plenty of interesting environments to explore but it’s linear at the end of the day.

There are only a handful of unique discoveries and little backtracking is implemented overall. True some elements cross over from level to level, they usually revolve around obtaining a new skill and using it once when retrying a level or taking another path.

Dead Cells has the advantage here as death really does mean death in some respects and it lends well to the sense of progression. Every time you die, you learn more, gather more resources and become stronger overall. Death means much more in Dead Cells.

Hollow Knight has a cool idea as when you die, you have to fight your ghost to gain your lost riches. But after a while, death lacks any impact other than a slight inconvenience.

So with two out of three, Dead Cells wins this round!

Dead Cells has an interesting setup where you play as a ball of slime, using an empty vessel to traverse the world in order to destroy the King.

While you learn that the king is corrupt and there have been plenty of misdeeds happening, you learn along the way that things aren’t so black and white. In fact *spoilers* you seem to be the bad guy in many respects.

While there’s plenty of lore here, it ends up being a little overkill with too many different side plots and backstory elements happening which don’t easily add up. I like small details but somethings just feel thrown in to make it sound cool.

Now Hollow Knight has a similar foundation, you play a nameless figure that appears from nowhere and ventures forth into the underground kingdom on a mission.

That mission ends up being to destroy some very powerful figures in the decaying, forgotten kingdom under the town of Dirtmouth. The darker tone, enticing aesthetics and how the aspect of choice is handled makes Hollow Knight a standout.

Hollow Knight can be a downright depressing game due to the choices you can make and certain events. One area sees dozens of bodies fall from the sky but when you reach the top, you learn their fallen warriors of the bloodthirsty colosseum.

That image alone was pretty haunting. It has no middle ground as you can save friendly creatures from captivity but harvest the souls of fallen warriors to become more powerful.

You learn more about fragments of dialogue, journals found in the world and environmental details and visual clues are vastly more interesting. Plus the story just adds up more than Dead Cells.

So Hollow Knight wins this round.

The Winner is …. Hollow Knight!

While Dead Cells is a great game that introduces an excellent re-imagining of the Medtroidvania formula rather effectively, at the end of the day It’s not a true Metroidvania game, granted it’s a fine game but it misses some key elements that make a great Metroidvania.

Hollow Knight succeeds in sticking to the rules but also adding elements which makes the formula stronger and is just perfect in so many ways.

Hollow Knight is a superb example of how to effectively create a great Metroidvania game for fans and new comers. It’s cleaver in its design while never holding your hand, gives you a thoughtful story  told with visual clues and other cleaver methods and the world is massively enjoyable to explore.

Both games are great but Hollow Knight is the shining example on how to make the perfect Metroidvania game.

Quick Ways to Transfer Music from iTunes to Android