Wish we could turn back time...

This review is based on the review copy of the game provided by the publisher.

Time-travelling has always been a popular topic to explore in different video games. Prince of Persia, Timeshift, and Braid are the ones that instantly come to my mind. Some of them fared better than others but, ultimately, we have not had an absolute smashing hit in this department. Iron Danger tries to get there as well. Let us see how it coped with this task.

Iron Danger by Action Squad Studios is an interesting game in its core design. Initially, I have even thought that it might be the perfect love-child of Divinity: Original Sin and Superhot. The game definitely deserves “A” for effort.

However, after spending some time with the game, a realization came to me: if this really is the child of those games, then it was clearly abandoned by its parents. The kid is now an adult who is bound to work in McDonald’s for life. He could have become a lawyer. Alas, it did not happen.

What did this game manage to do well? Where did it fail? Should you buy it now or wait for a discount? Join us on this wonderful journey of broken dreams and disappointment. 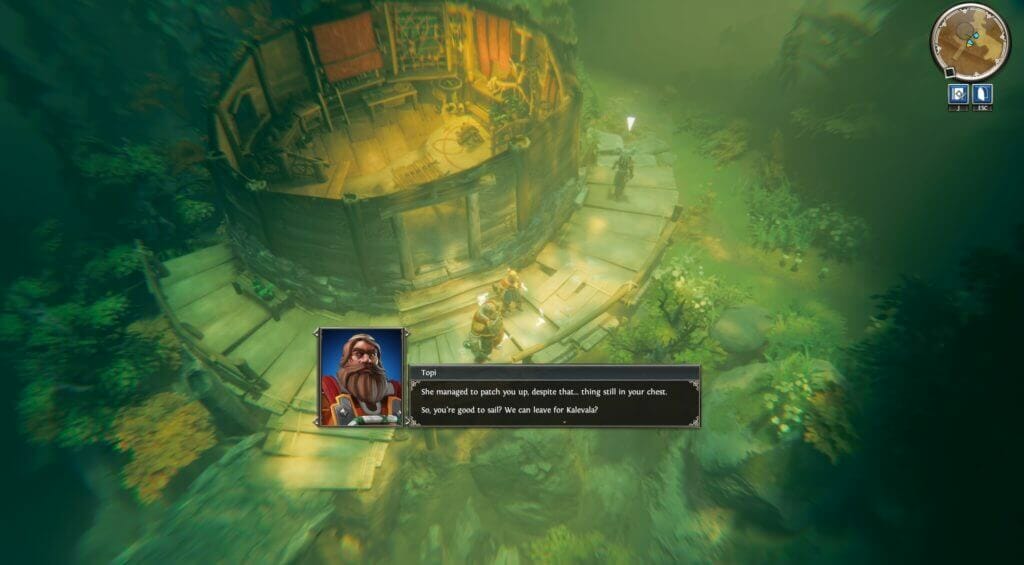 Loading the game, I was pretty optimistic about it. Starting a new game, we instantly meet the main cast of characters. Topi and Kipuna have arrived from a village sieged by Northlanders to ask assistance from Lord Antheor, the demigod ruler of this magic land.

One thing Antheor notices about Kipuna is that her chest is literally impaled by a giant glowing shard. At this point, we are thrown into the tutorial, where we learn basic controls and the whole premise of the game.

Here is how it goes: Kipuna, a teenage girl, and her friend/brother/whoever that was are escaping the burning village. We break the door, run outside, step on some clearly unsafe surface and fall down to our death. Fortunately for Kipuna, she is shielded by thick plot armor.

A giant glowing creature shows up out of nowhere. “This is not how you die, Kipuna,” says the creature and the time magically reverses. At this point, we acquire the gimmick of Iron Danger – time manipulation.

After learning how to use it, we find Topi, the local blacksmith. Our heroes escape the city on a ship. Kipuna is still gravely injured so our brave blacksmith decides to take her to the mysterious Red Healer. There the kid is stabilized and learns to harness the power of the shard, obtaining the power to wield fire.

Then the heroes come to the capital and tell the story to Antheor. This is where our quest begins. We need to find 5 more shards and return them to our friendly neighborhood demigod. 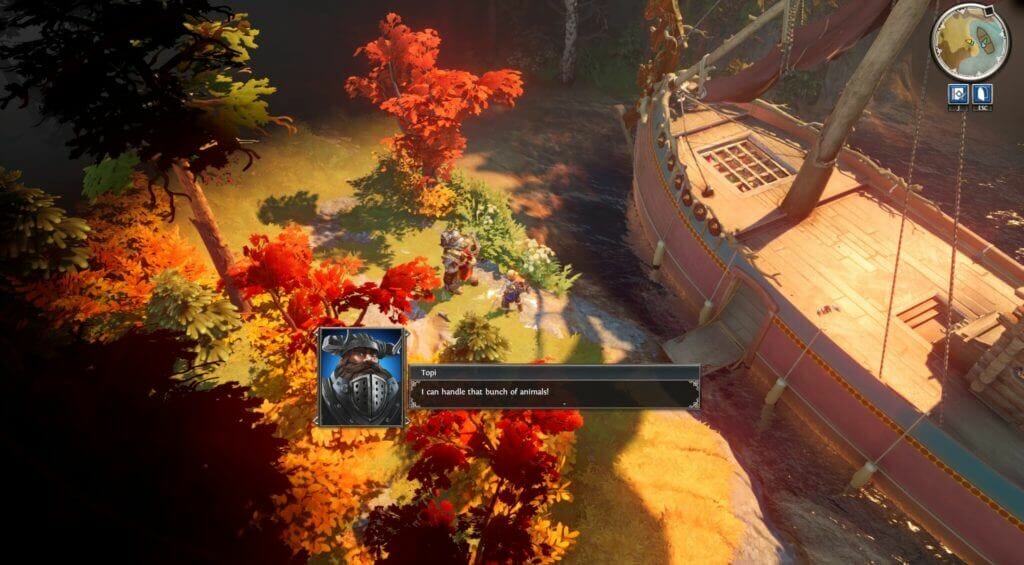 Topi is an absolute oaf but I love him to bits. The voice actor did a great job of capturing this character. He is a bit nervous; he is dumb but he acknowledges it. Topi is just a big man with a big hammer and a big brave heart.

Kipuna, on the other hand, is quite the opposite. She is this Mary Sue kind of character that we all have to love because she is the protagonist. In reality, she is just an emo kid who, for some reason, did not die a horrible death when impaled in the chest. Instead, a crystal god goes all “You’re a wizard, Harry” on us and we are suddenly the chosen one.

I feel that Kipuna is the main culprit of me not enjoying the game. The player is supposed to relate to the character in some way. In reality, there is nothing to relate to. She is an empty character with no real personality. She does not grip you instantly. Kipuna sees some development of personality by the middle of the game – but at this point, it is too late.

Then there is the Healer with her overly-mysterious way of expressing her thoughts and inexplainable sympathy towards Kipuna. She instantly becomes this mother/mentor character to Kipuna because, of course, she is the chosen one and she absolutely needs that. It feels as if she tries to be this Morrigan-type of character with motherly feelings towards the protagonist but fails to capture it correctly. 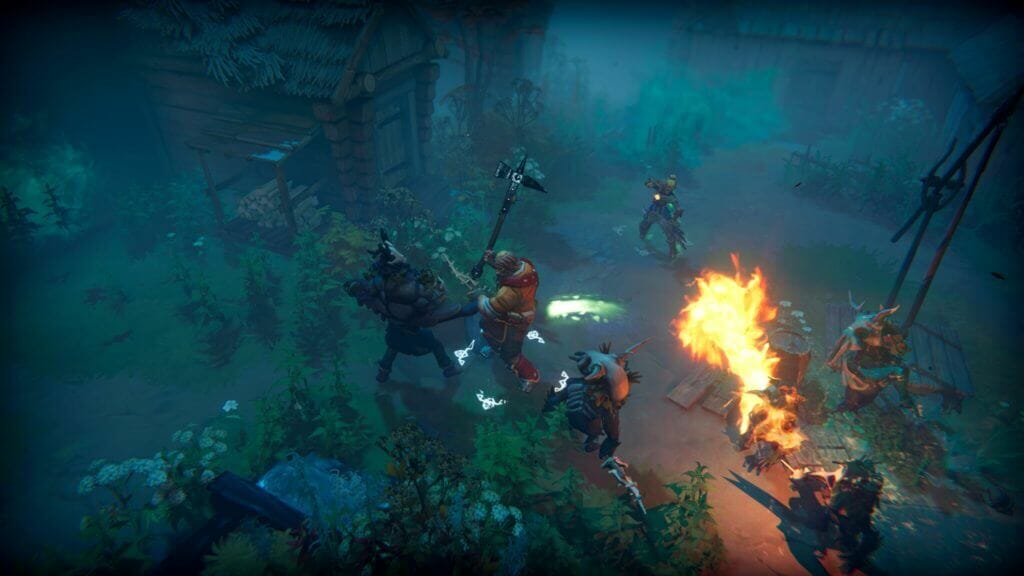 Let me tell you, the main mechanic of Iron Danger is hella fun. This is like save-scumming to see what happens – but on a legit gameplay level. I have thoroughly enjoyed toying around with this feature to kill my characters countless times and then end the combat without getting hit a single time. It is well-refined, has nice controls and is well built in every aspect.

Unfortunately, it is only fun for the first one or two hours of the game. Then it becomes quite mundane. The problem with manipulating time is that it is way too overpowered. Even though you can rewind only the last 7 seconds (or 14 heartbeats), it simply removes any challenge from the combat.

The game is advertised as an RPG, so I came expecting some RPG elements. Iron Danger is an RPG in name only. Sure, there are some elements of the genre, but they are not flashed out enough to call this game a real RPG. Let me give you some examples.

Character customization is non-existent. You cannot get stats, there is no equipment, and all the leveling is basically one of your characters just getting new abilities after every mission. Thing is, you do not gain experience from combat, no. Literally you are just given one ability point after a mission. The abilities on their own are good, don’t get me wrong, but that is not enough.

Exploration is also missing. Usually, exploration rewards players with something. Here, it just gives you more mobs to kill. Which, as mentioned before, does not give more experience or ability points.

You can find occasional herbs or traps but with the ability to warp time you will never use them unless you deliberately decide to do so just for the sake of it. 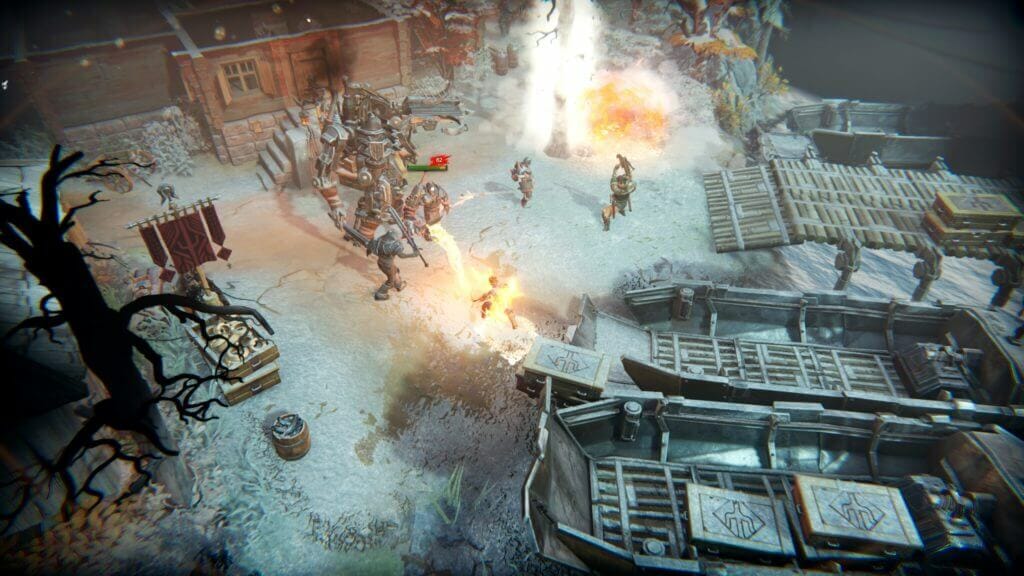 All of the narrative and gameplay problems aside, the game has some serious technical issues. The first glaring issue I and many other reviewers have noticed is the terrible optimization. Let me tell you how I know.

At the first launch of the game, I set everything to Ultra, because I am a proud member of the PC master race. The first cutscene was running at smooth 144 FPS, so I thought to myself: “Hey, this might be a good game”. Oh boy, was I in for a surprise.

When the tutorial launched and everything around me was burning, I dropped to 30 FPS. I wouldn’t mind playing Crysis 3 in 30 FPS on Ultra. I wouldn’t even mind playing it at 15 FPS on high settings because that game is REALLY graphically intense. Iron Danger, however, has the League of Legends level of graphics – and that one will run relatively smoothly even on a toaster from 1920.

What is even worse, dropping to the lowest settings (without lowering resolution) did not change much – I have gone to maybe 50 FPS tops and those were still really unstable. The game regularly freezes, especially when transitioning from combat to exploration and vice versa.

Movement controls are also a bit unresponsive. In the zones with more stable performance, the input lag was still quite noticeable. It was not critical for a tactical game with the ability to warp time but it was still at or barely below 1 second – which is not the speed modern gamers are used to. 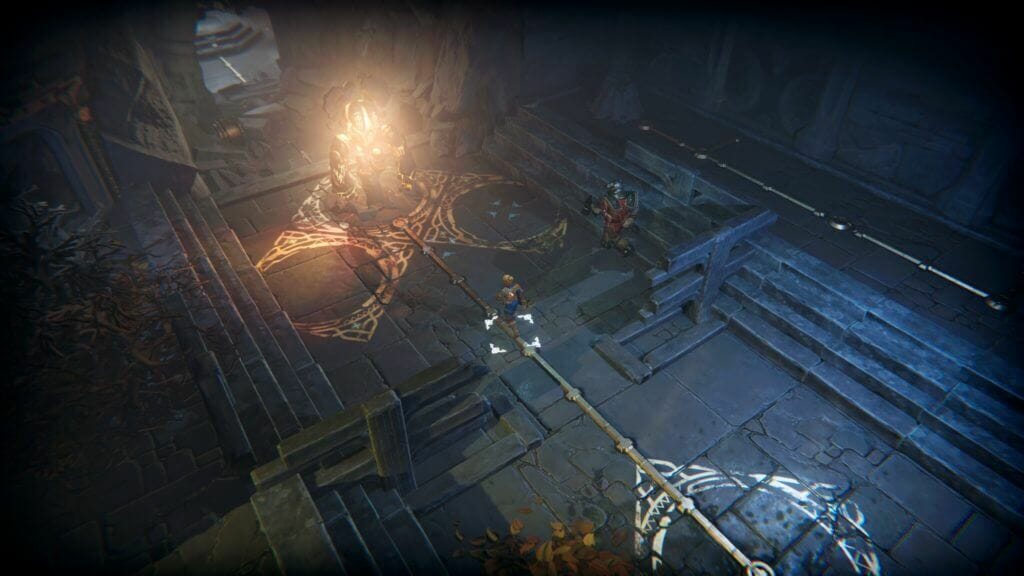 Iron Danger is a missed opportunity for me. It had a lot of potential. However, it royally screwed up on multiple fronts. The initial ideas are fun. The core mechanic is extremely fun. Outside of that, the game is barren and broken.

Most of the characters feel flat and are outright annoying. The only character that I liked is Topi. However, that is not because he is well-written but because the voice actor is really trying to give this character an actual likable personality. The plot is quite compelling in its core but the protagonist ruins it and it falls flat by the time you get to the second shard.

Iron Danger suffers heavily from severe technical issues and a lack of optimization.

My final verdict is this: Iron Danger is not worth your time unless you really want to feel like an almighty chronomancer. The game costs 30€ on Steam and is now on a 15% discount until 8 April. My recommendation is to wait for optimization patches and buy the game for about 15€ when possible if you are really inclined to try it.

Share with us your experiences with Iron Danger in the comments, we would love to hear your opinion. If you want to see a high-quality puzzle game, check out our review of The Pedestrian.

Iron Danger is an interesting game at its core but it lacks a good surrounding shell and proper polish.