The Pedestrian Review – Puzzles in Public

Someone drew all over these signs

I typically don’t consider myself a big fan of puzzle games. The time it takes for me to go from “considering a solution” to “I hate everything” is far too short. However, when I see something innovative and visually appealing, it always manages to catch my interest. Recently, Superliminal (which will come to Steam eventually) impressed me with its perspective based puzzle design. Now let’s see if The Pedestrian attempts to do the same with puzzles based on signs. 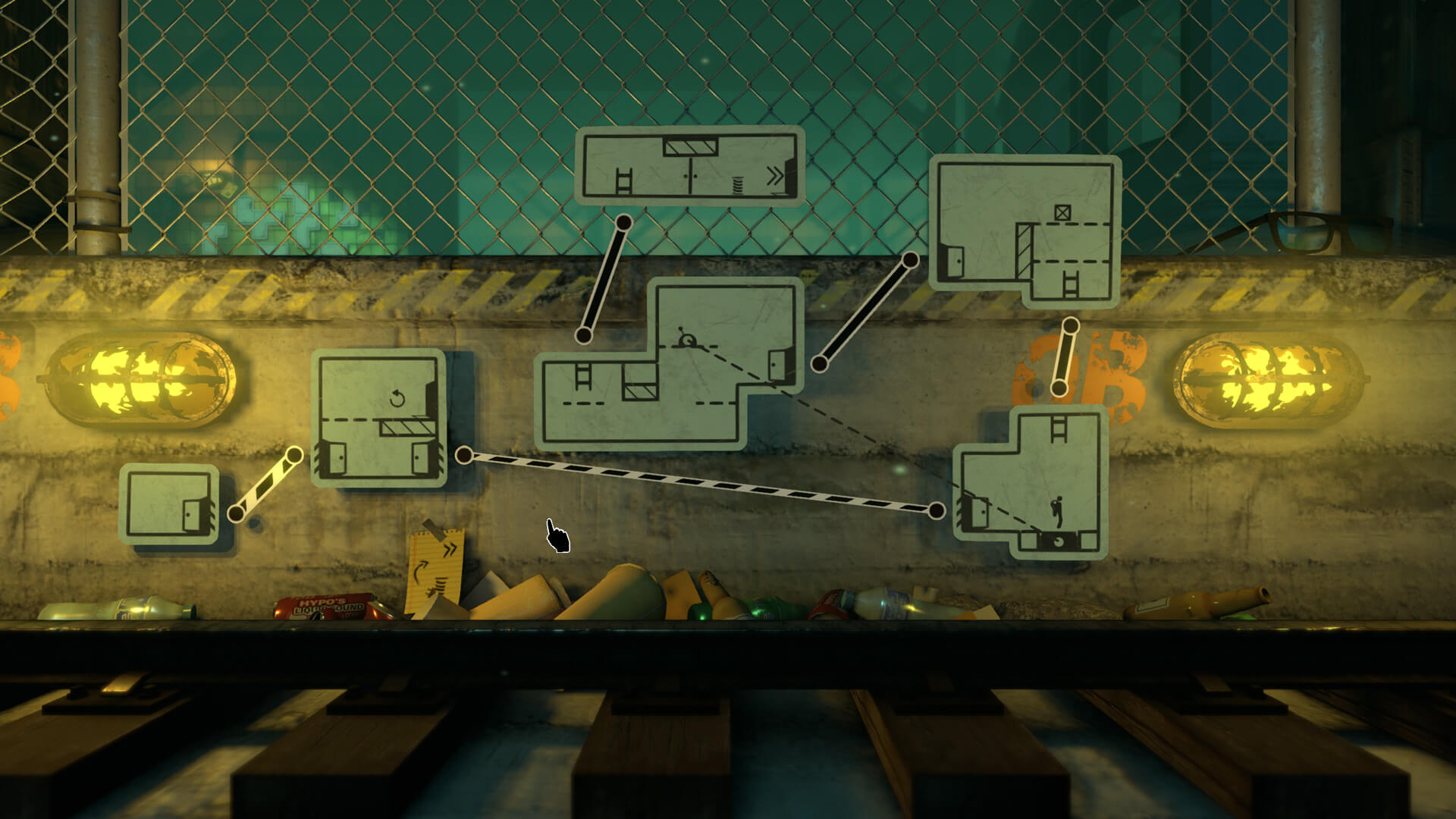 The Pedestrian, at its core, isn’t a particularly crazy puzzle game when considering the puzzles alone. What you solve usually involves the typical affair of moving the stick figure protagonist to areas using bouncing platforms, switches, and engaging doorways. While this expands a bit in the latter half, I don’t think anyone will be too overwhelmed by the methods and tools you use throughout the game.

What makes The Pedestrian so interesting is how it all goes together. Your character is the generic blocky-limbed round-headed human-proxy that is used in signs around the world. The same guy you see break dancing on the “wet floor” signs. This simple protagonist was chosen because the puzzles you’ll be solving are on various types of signs.

The signage you’ll be traversing is spread across numerous environments and is reflective of each location. You’ll be working on cork boards and whiteboards in offices, street signs along the roads, chalkboards outside restaurants, and so on. You transition between them using cables that you connect via an overview perspective – connecting doors and ladders that you can enter when in the ‘platforming’ view. It’s also often possible to move signs to both allow these connections and make use of other puzzle elements. 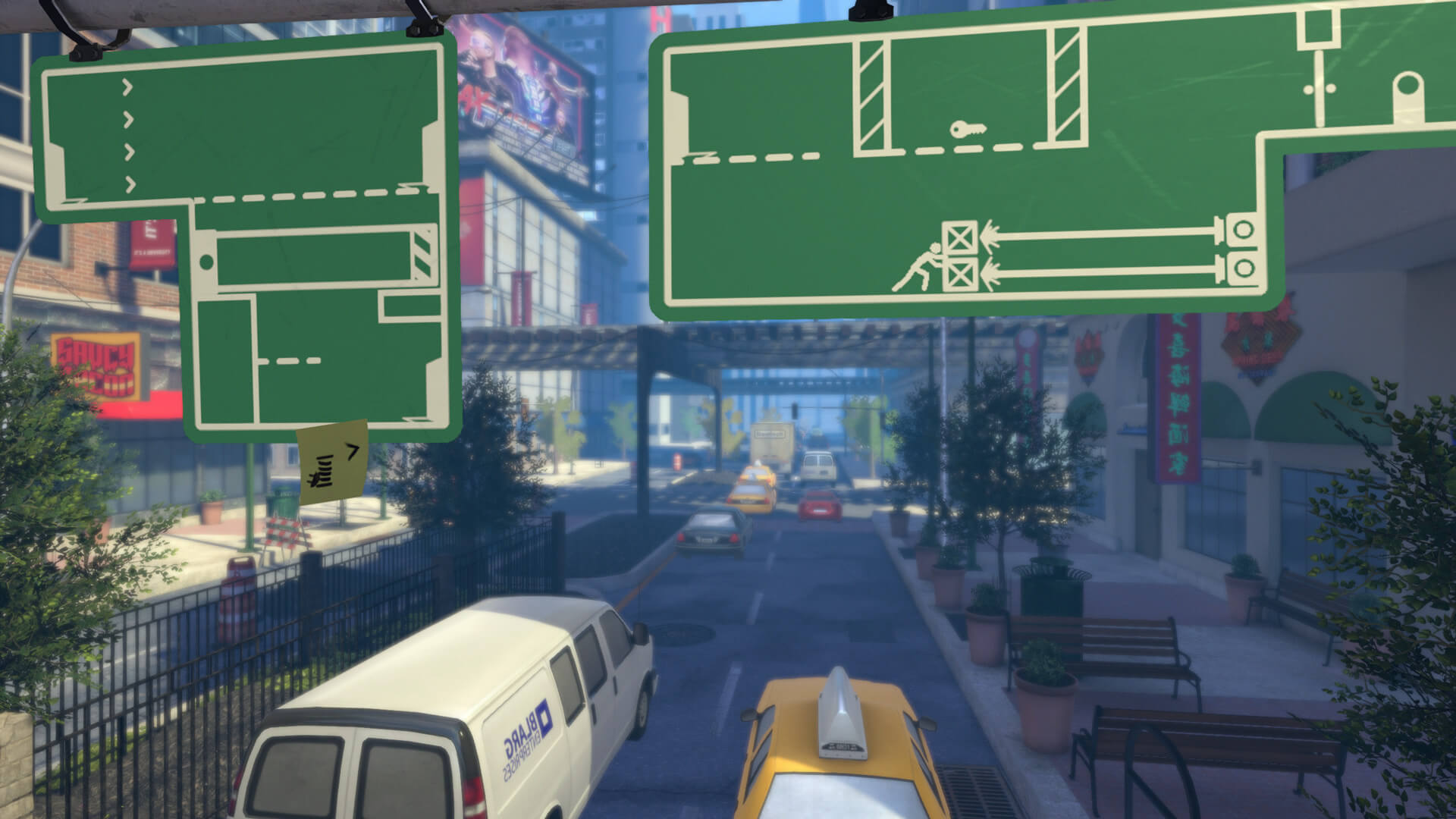 The most compelling parts of The Pedestrian are the backgrounds. That’s a strange thing to say, but after just watching the trailer, it was quickly apparent how spectacular they were. The juxtaposition of playing the game on simplistic 2D signs with rich detailed 3D backgrounds and foregrounds moving around you makes the whole game seem more alive. It may have just been a serviceable puzzle game focused only on the signs, but the environments add a layer to the aesthetic and even the gameplay.

It doesn’t take long for the puzzle-solving to expand beyond the boundaries of the signs alone. Soon after starting, there will connections between switches on the signs and parts of the environment. It starts simply with the opening of a garage door or moving an elevator but eventually progresses into driving a train and moving pieces of machinery. While this is mostly used just for cool visual effects, it’s also integrated into some puzzles by unlocking areas to allow you to move signs for different solutions. However, the visual component on its own is still very rewarding.

The way that the camera moves you between the puzzle sections has you floating through these well-crafted background environments in cinematic ways. It gives you a charming view of these interconnected areas designed mostly just for their appealing looks. I always found myself excited just to see what new location I’d end up seeing as I progressed through the game. It became just as much as part of the experience as the puzzles. 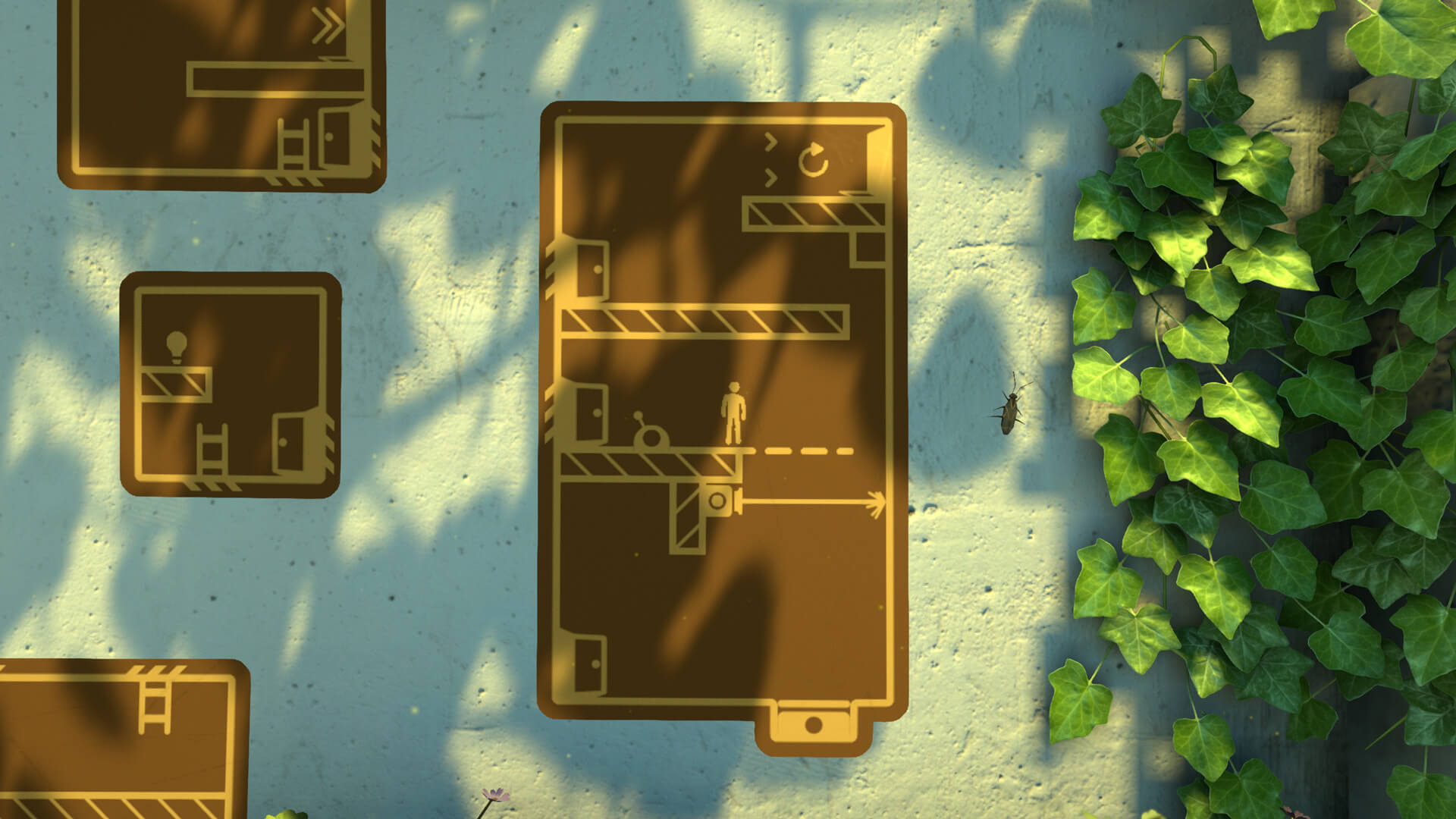 The Pedestrian drops you into the gameplay without much explanation of why you are this stick figure or what you’re trying to accomplish in the end. It drops some hints here and there, but the ambiguity is present throughout the game – up until the very end. This did make the ending more interesting than it probably would have been had it been heavily foreshadowed.  However, it might not have worked out if the game wasn’t so entertaining.

One thing that did ultimately stand out was that you’re manipulating a strange little modified Gameboy-looking device. When you first encounter it, it just seems like another part of the background/foreground, but after some time it becomes apparent that you’re adding pieces to it with each central puzzle area. This item plays a much bigger role toward the end of the game, which is both unique and surprising in its design. 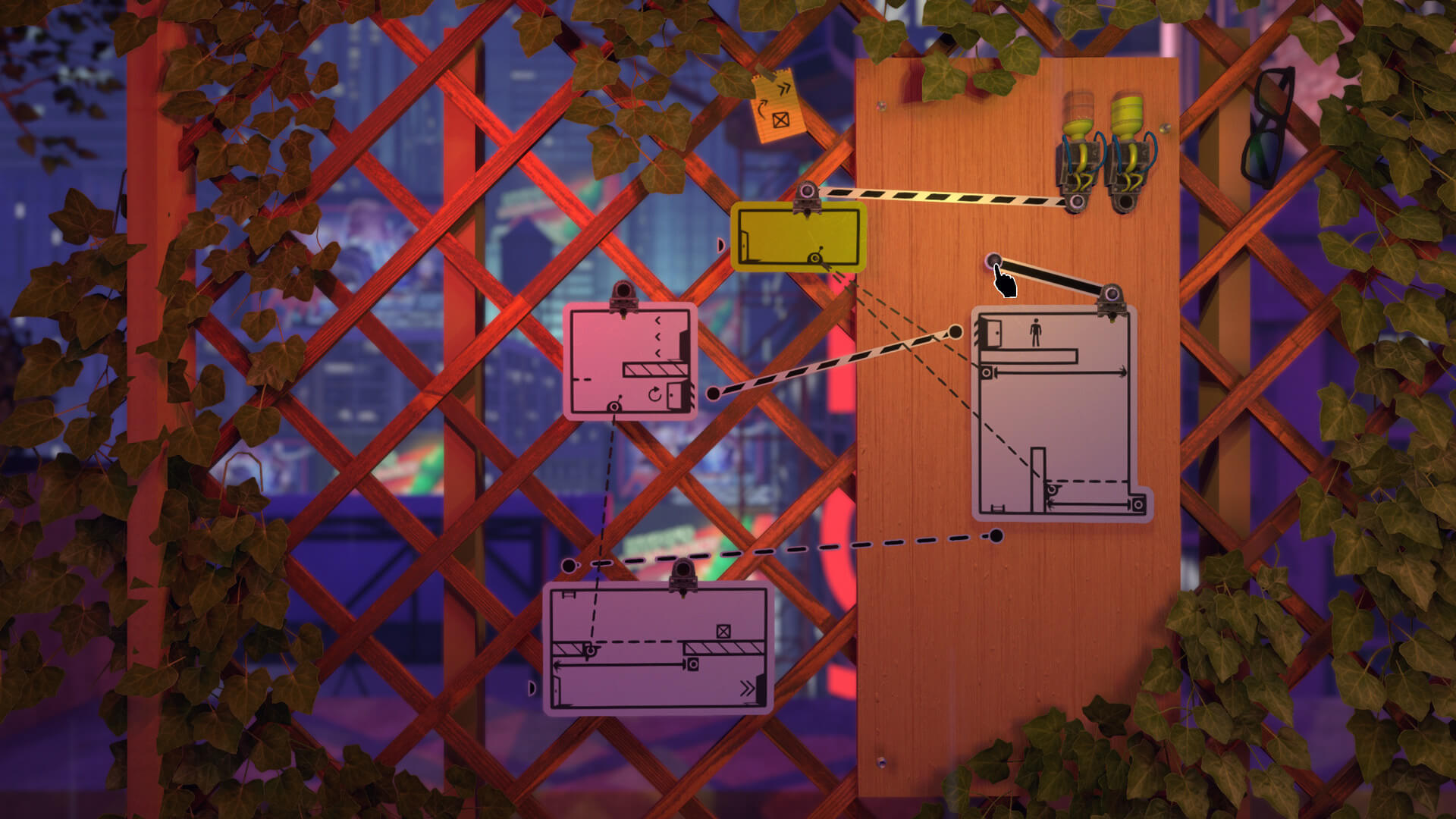 Toward the end of The Pedestrian, the difficulty ramps up quite a bit. The introduction of some mechanics like the ‘green paint’ that prevents triggers on a sign from resetting when you change connections adds a notable level of complexity to the puzzle solving. This is a common element of any extended puzzle game, but for some reason, it took me a while to wrap my head around how the ‘green paint’ really worked. My limited puzzle game patience made this part of the game much tougher to complete.  I might have given up if not for the great music.

I don’t know what it is about the easy listening jazz-styled music, but I loved it. It reminded me a bit of Sim City and, of course, that’s a big win in my book. The only disappointing part was that it would always fade out in the middle of puzzle sections. It was so disappointing and made those frustrating parts even more frustrating. I didn’t enjoy having only the relatively silent background noise to keep me company while I contemplated how puzzles. I’m fully capable of turning off the music if I get tired of it.

The Pedestrian was an enjoyable experience from start to finish across it’s five or so hours. The puzzles were mostly competent without being too easy. Yet when they were tough, they didn’t let up. The quality of the backgrounds, the transitions through them, and their interactivity made every piece of the environment feel distinct and well designed. Even the music is wonderful (when it’s playing). If you are remotely a fan of puzzle games (I’m talking even Portal here), you owe it to yourself to try The Pedestrian. It’s practically a master class on what makes this genre enjoyable.

If you’d like to see more of our content on puzzles, check out our review of Superliminal or 9 of the Best Puzzles Games on Consoles.

The Pedestrian delivers solid puzzle gameplay in a wonderful package with beautiful environments and music. It's challenging, but mostly fair and feels polished from start to finish.

What Can Modern Gaming CPU’s Provide?

What Can Modern Gaming CPU's Provide?