Journey to the Savage Planet Review

by Andrew Murray
in Game Reviews, Xbox One Reviews
0

Journey to the Savage Planet DEALS

January and February are fairly lightly filled with games for my personal taste, but a few games caught my attention, and some were not as great as I had hoped. However, what I immediately wanted to play was Journey to the Savage Planet and finally it is here, tripping your balls off on the most expensive alien planet I have seen in ages. 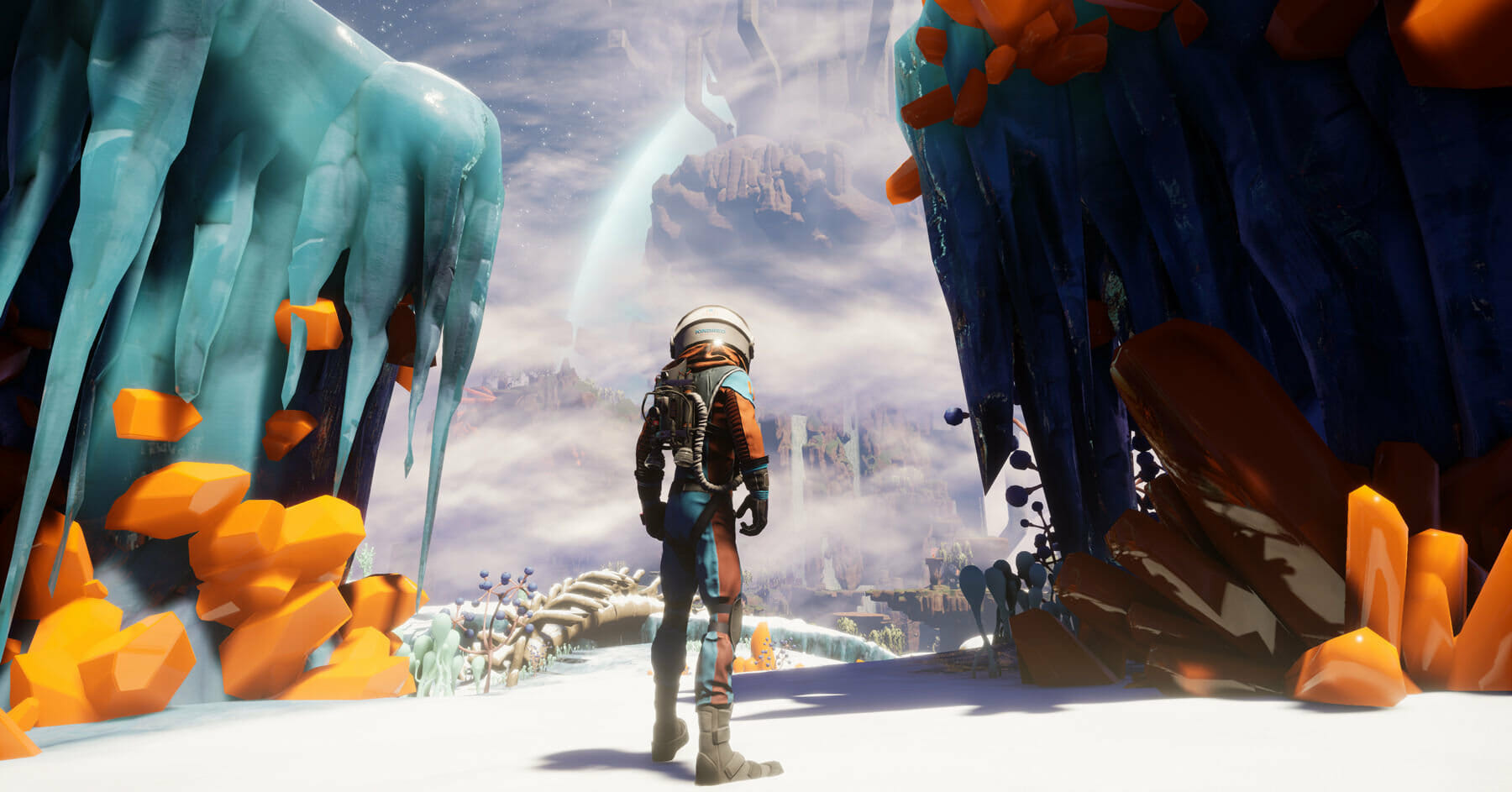 But what exactly do you do in Journey to the Savage Planet? You are part of Kindred, the fourth best space pioneer company in the entire universe! Your mission? You are on the planet AR-Y 26 and you are going to explore and prepare for the inevitable human corruption. Uh, I mean colonization of course!

People can no longer continue on planet Earth and we have to look for new places to live. And if we can also earn a little money from it, why not? Those are not my views, by the way, but those of your employers at Kindred. Martin Tweed is the CEO and regularly sends you updates via video messages. That man is worth gold, by the way, but I’ll tell you more about that later.

Anyway, Kindred Aerospace has dropped you on a planet with not enough fuel for the return to earth and with no kind of equipment at all. What are you going to do now? Alone or together with a co-op partner and your sassy AI company called EKO, you start exploring the planet. The flora and fauna are magnificent and magical to look at on Xbox One.

Magical as if you’re tripping on acid, because some designs are so alien that you don’t know what you’re looking at. The worlds are bursting with color, but not the gray color palette that we are used to. Everything in the world looks like the shades of neon have increased by 100%.

Normally this causes a sick experience, but it fits exactly in with Journey to the Savage Planet. The mix of the sharp colors with the amazing wild life ensures that the adventure game stands out visually on Xbox One. 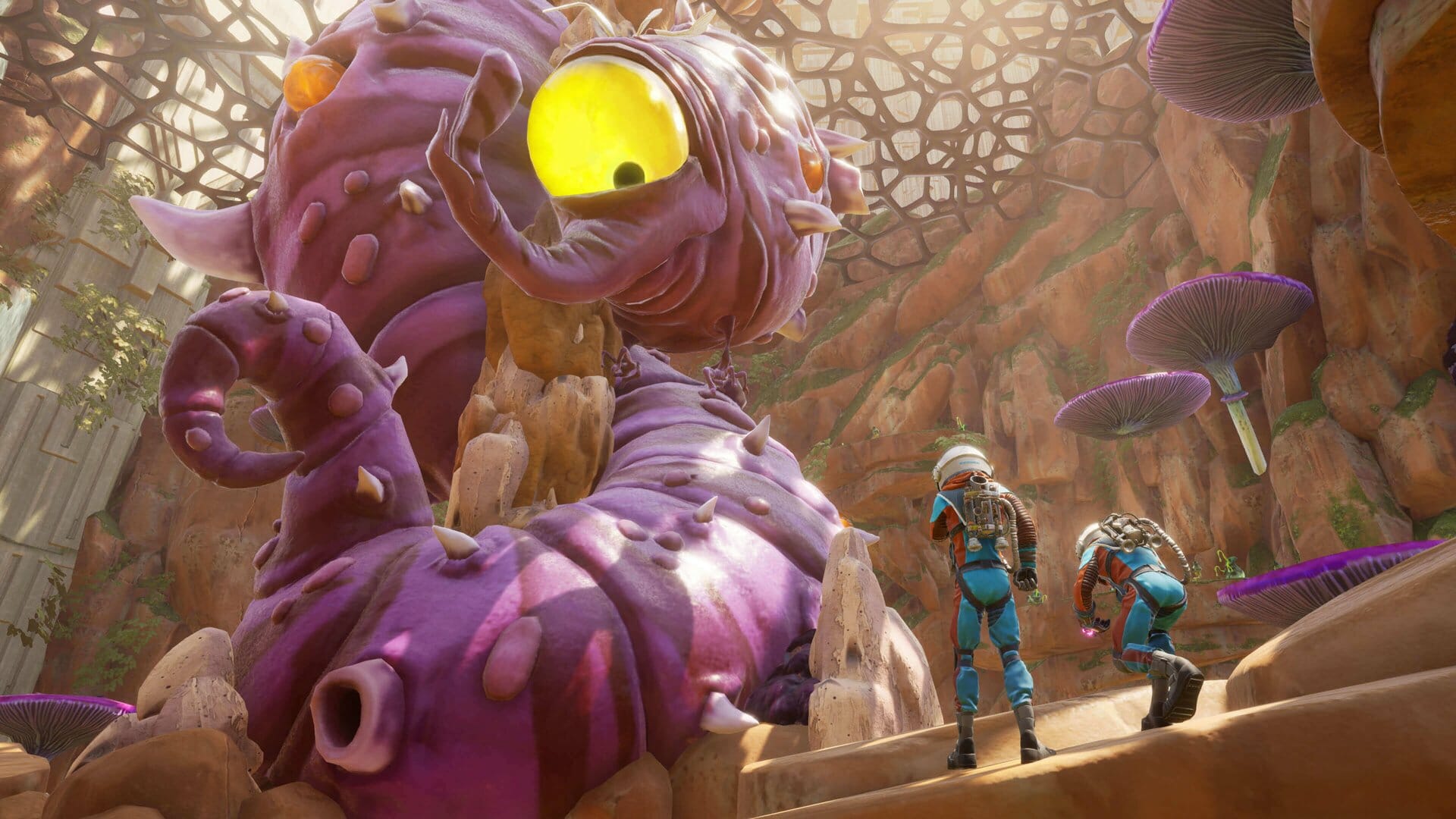 CORPORATIONS AT ITS WORST / BEST

After you have arrived on the planet and have scanned the necessary damage, go out. The Journey to the Savage Planet exploration system works as follows: you scan everything, you look with admiration at the biodiversity on the planet and then you destroy it for the resources you need to further explore the world.

You can find all of these these resources by beating aggressive (and passive) life, secret locations on the map and much more. With the 3D printer on your ship you can make various gadgets that are necessary to continue in Journey to the Savage Planet.

This way you can make a jetpack, which takes you to higher locations, a grappling hook to swing around and much more. These materials are very easy to farm on Xbox One, so you don’t have to worry about getting stuck. Take note that destroying the cutest critters gives you the most resources, which is typical for the setting of the game.

When you put some soup chicken in a plant that also serves as a meat grinder, it is both tragic and hilarious. Just like the general message of the game. People screw everything up. Everything must be broken, faster, more beautiful and, above all, more money.

Our best CEO Martin Tweed regularly informs us that we are doing a great job for Kindred, but that man is secretly very fake. With a big fake smile and various false promises, he actually makes us look a bit ridiculous. But it all is just so hilarious, so I can live with it.

You will also receive various commercials, which completely mislead large companies. The over the top 80’s commercials were all a pleasure to watch and I rarely laughed so much about a game. Even the smallest, subtle animations made my day much better. 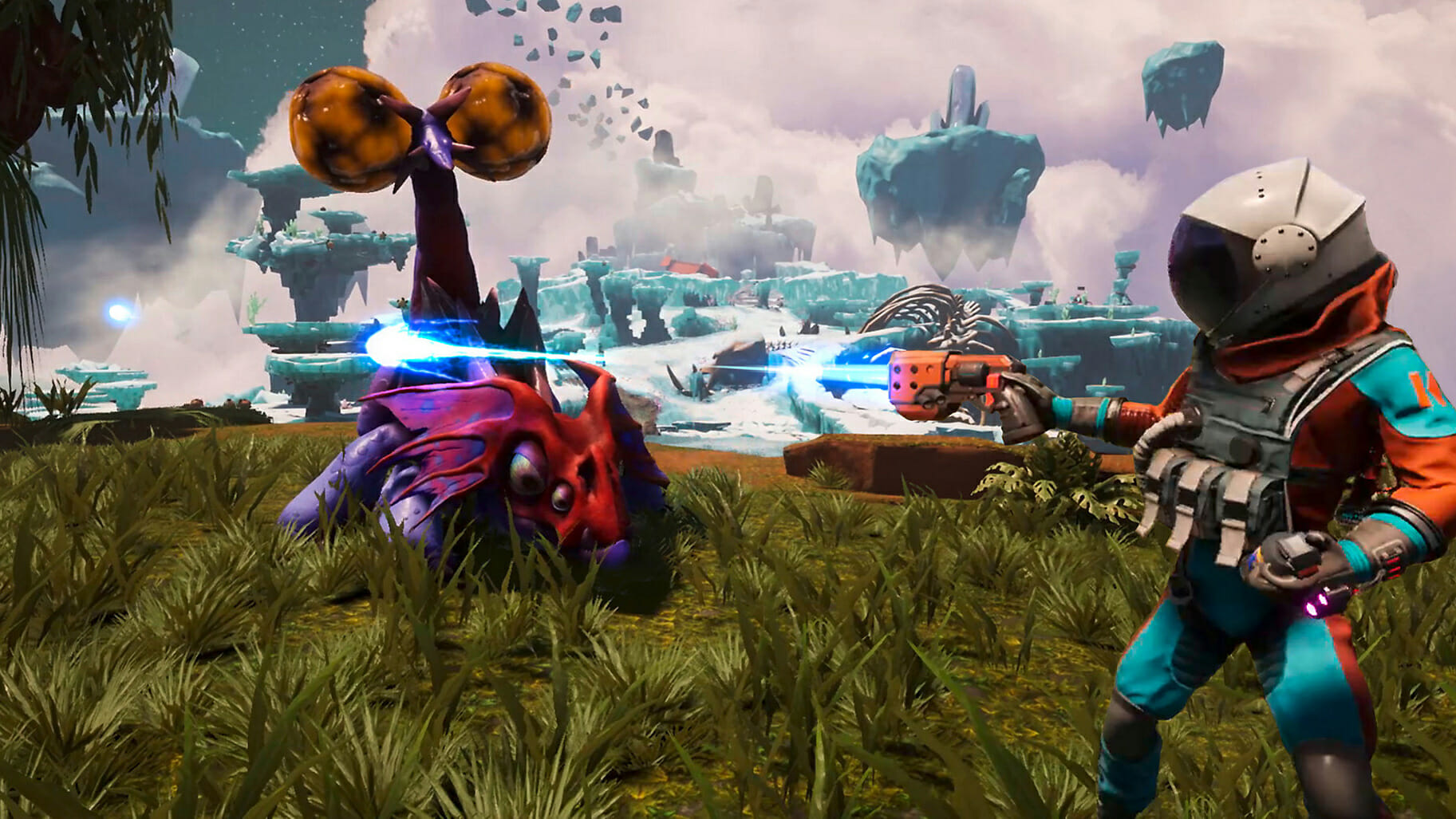 COMBAT IS ANYTHING BUT SAVAGE

Okay, so the presentation looks good on Xbox One, the lore is somewhat interesting and the game’s message is hilarious and also a bit true. Recipe for a GOTY? That again just not. Journey to the Savage Planet has some negative points that I simply can’t ignore. Combat in the game is not entertaining.

In the game you can surprise the smaller creatures with the infamous bitch slap, but trust me, the big carnivores will appreciate that a bit less. Although you upgrade the plasma gun often enough, it never really feels powerful. Which is not necessarily bad, but it just doesn’t feel nice to play with.

The shooting mechanics just feel very old-fashioned and slow, especially for a modern 2020 video game. Not only does the combat feel a bit crazy now and then, but also the way your character moves. Often I did not get the right input, which caused me to fall off the map again, or I lost speed in the middle of a jump, causing me to fall yet again.

These kinds of small things make the overall experience a lot less fun. In addition to the controls that were below par, my co-op partner and I often had to deal with various bugs and issues on Xbox One.

Achievements that don’t unlock, frame drops, connection issues and even a bug that kept my buddy floating in the air when he was down, which prevented me from helping him. Frustration moments. Are they game breaking? Usually not, but they still bring the whole experience down a bit if I must be honest. 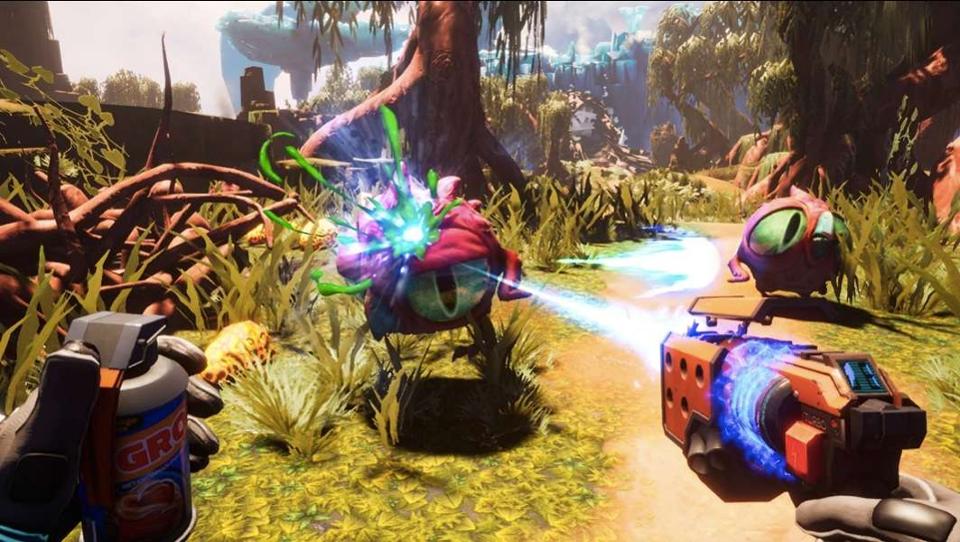 How the game mocks mega companies is nothing less than hilarious. Not necessarily by the subject, but by the sublime execution. The game is very beautiful and the design work by Typhoon Studios is truly amazing. However, they do drop the ball at the gameplay itself.

The controls just don’t feel so good and the combat might just as well not have existed. It can certainly be a bit monotonous. In addition to the fact that the frame rate did not remain extremely stable and the multiple bugs, this still feels like a loss of potential.

Have you tried Journey to the Savage Planet, or any of the other games published by 505 Games? What do you think? Leave your thoughts in the comments below.

Are you interested in more games published by 505 Games? Check out our reviews for Sniper Elite 3, Payday 2, and Terraria.

Journey to the Savage Planet

Journey to the Savage Planet really has something to offer its players. The worlds are colorful and filled with ingenious forms of flora and fauna. The game is worth the rocket ride, but whether you want to stay on the planet forever? Probably not.

Journey to the Savage Planet DEALS