Papa I want a Gundam. 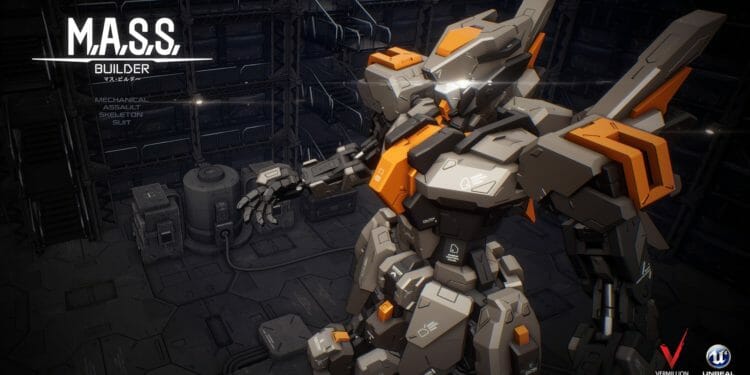 This is an early access review, meaning whatever is addressed within the review is subject to change.

M.A.S.S. Builder is an upcoming game from Vermillion Digitial that recently entered early access. The game sells itself as an action RPG in which players pilot a highly customizable M.A.S.S. (Mechanical Assault Skeleton Suit). With their M.A.S.S., players command a private military company that is tasked with keeping the threat of Quarks at bay. Moreover, the game arouses nostalgia for similar Mech games such as Gundam, AC, and more.

“A future in where humans lived a prosperous century and technology advancing beyond space and time,” that was what humanity should have been if not for the sudden appearance of unknown beasts of the void. A large portion of humanity were gone in the moment. War for the survival of humanity broke off all over the world, changing landscapes and settlements into warzones. Humanity were forced to relocate into shelters and reinvent their technologies into weapons of war, the M.A.S.S. technology.”

While the opening sequence of M.A.S.S. Builder’s is a bit cliche, it has a good premise. It immediately grounds the player into a story befitting for Mecha games. Also, the in-game world is somewhat compelling and rich with information to immerse yourself in. Although the story is nothing to write home about, it does manage to immerse the player into it due to its use of second-person narration. However, the immersion is ruined by grammatical errors and odd descriptions.

M.A.S.S. Builder, as mentioned before, is an action RPG. This offers plenty of insight into the gameplay, which relies on elements from both genres to create an enjoyable experience. The game prioritizes fast-paced combat with numerous hordes of Quarks. This is coupled with enough in-depth customization to keep players engaged until they have made their ideal M.A.S.S. or mech.

The first mission for M.A.S.S Builder is unsurprisingly a tutorial. It covers the basics of gameplay; however, certain aspects are left untouched, especially those concerning combat. This is worrisome since the game relies not only on RPG elements but action elements as well, keeping a balance between the two. However, the shortcomings of the tutorial are supplemented with M.A.S.S. Builder‘s help section that covers the entirety of the game’s mechanics.

M.A.S.S. Builder has an in-game map that focuses on missions. The world map is merely decorative and serves no significant function aside from displaying mission points. Missions, on the other hand, are significant. They are divided into side missions that the player receives from other companies, and story-related missions that push the plot forward. The former is useful, as it allows players to acquire more resources and credits to improve their M.A.S.S. for upcoming missions, especially those concerning the story’s progression.

M.A.S.S Builder offers fast-paced combat—but that’s all. Combat gets lackluster, especially after the first few missions. This is largely due to the distinct lack of a combo system, unless one would consider ramming into enemies with the M.A.S.S. after making use of its boosters a combo system. However, customization changes the weapon’s behavior, offering some variation in fighting and the illusion of a well thought out combat system.

The game’s level progression is standard. The player will have to perform small tasks before progressing to another area of the level. (For example, scan transmitters to assess their damage.) However, when it comes to utilizing the M.A.S.S itself to progress through levels, this is almost nonexistent. The tutorial demonstrates the above, as there is a section where the player has to jump and then use the boosters of the M.A.S.S. to continue the tutorial. Aside from that part, there are no other instances of the functionality of the M.A.S.S. being used to traverse levels.

M.A.S.S Builder implements its RPG elements well enough to keep players invested. The game has two forms of reward systems: enemy drops and credit rewards. The former occurs after defeating enemies, as their defeat leads to ‘loot drops,’ or rather resource drops for completing blueprints (requirements for unlocking more customizable content). The latter is dependent on mission performance since it determines how many credits the player receives at the end of the mission. These credits are only usable—along with particular resources—to further improve the player’s M.A.S.S. through purchasing upgrades in the game’s development section, which houses a skill tree with three categories: Engine, OS, and Architect. Each one of the categories improves certain aspects of the players’ M.A.S.S. to give them the edge in combat.

M.A.S.S. Builder‘s strongest selling point is its customization. The game features an in-depth customization system, which has two types of equipment: equipment that affects stats and equipment of pure aesthetics. The former is seen within the weapons and tuning section. These change weapon behavior and the performance of the M.A.S.S., which is useful for dealing with more powerful Quarks. The latter is seen within the armors section, where the player can customize the entirety of their M.A.S.S. unit from joint to feet. In addition, all forms of customization have options for paint and decal.

M.A.S.S Builder has a lot to offer graphically, but its audio is average. Though unlike the game’s graphics, it has no shortcomings. Graphically, the game is aesthetically pleasing and even enemies have visual appeal; however, there are some issues. The game makes use of character busts for dialogue scenes; despite the visual quality of these busts, they fall short with their lack of emotional depth. Also, the enemies in M.A.S.S Builder tend to get dull after some time due to their repetitive color design and stages. Some mission levels appear to be copied and pasted, especially the first three outside of the tutorial. Audio-wise, the game is average at best with the soundtrack managing to suit the game’s atmosphere; however, it fails to be memorable. Thus, both the graphics and audio of the game lessen its impact on gameplay.

M.A.S.S. Builder has recently entered early access, meaning everything put under criticism could change. This would be ideal, given that the game has much potential to offer, which is seen with numerous aspects of the game. These aspects are its fast-paced combat, in-depth customization, intuitive M.A.S.S. design, and more. However, with any game, there are the negatives that weigh it down, and it usually does more to affect a game’s overall performance. Though, as stated earlier, the game has entered early access, meaning improvement can occur throughout the game.

This review is based on a review key provided by the developer.

Are you going to check out M.A.S.S. Builder in early access? Leave your thoughts in the comments below.

If you want to check out some other mech-oriented games, check out our reviews on Dynasty Warriors: Gundam Reborn and MechAssault.