Fly fishing lives up to its stereotype of mediocrity 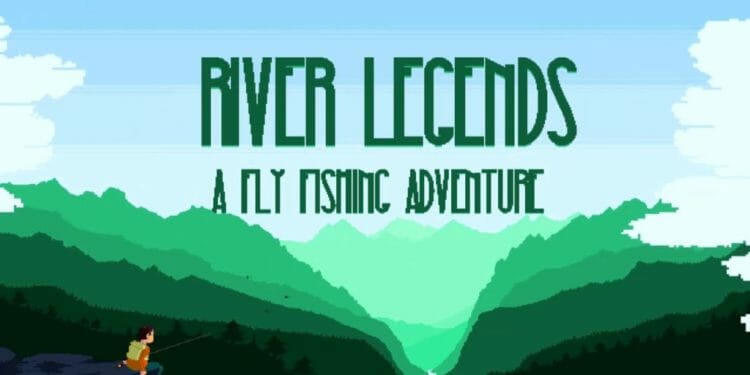 Growing up, I played quite a few fishing games. I’ve not played one in a while now, but the idea of a pixel art fly fishing game seemed like an interesting premise. The nostalgia of playing another classic looking fishing game and my unfamiliarity with fly fishing immediately had me interested in trying this out. However, I was a little surprised at what I ended up getting.

I think it’s relevant to say upfront that solo indie dev Dantat Studio‘s River Legends: A Fly Fishing Adventure is a mobile game as well, not just a PC title. I’ve gotten a sense for when games are mobile ports or simultaneous mobile releases (not that it’s difficult to see) because of certain design limitations. River Legends has these in a few areas.

The control scheme for the game is mouse and keyboard, which honestly surprised me when I started out. I assumed the ‘swing and flick’ nature of casting would involve a controller’s analog stick. However, there is no controller option. After just a bit of practice though, using the mouse to do this becomes second nature.

The UI is also HUGE on the screen. This is customary for phone screens, where visibility must be maximized and the dexterity needed to select screen items has to be minimal. This does make for some areas where things look a bit awkward. But in general, the UI isn’t detrimental to the gameplay. I just wouldn’t mind if it was the size of a typical game played on a monitor.

Part of what made River Legends interesting was the sense of progression. While it is limited here, it’s an element that makes similar fishing games more enticing to play. Buying new gear and unlocking bodies of water keep you moving forward and catching as many fish as possible. The problem began when, an hour into the game, I had already purchased all of the gear. Not long after that, I unlocked every lake. By the two-hour mark, I was just trying to resolve some of the hidden milestones like catching the secret giant fish typical of every fishing game.

There is also a bit of an exploration element to River Legends. You can walk around the map to put yourself in the most advantageous position for casting your line, but there’s more to it. With a little searching, there are several caves hidden throughout the maps.

For the most part, these are uneventful. You can pick up little bits of gold (the game’s currency) in these caves, and something sort of like Easter eggs, but I couldn’t find anything significant in them. I assumed there would be some kind of magical fishing pole or lure hidden away, but after what seemed like endless searching—nothing.

River Legends, as with any fishing game, hinges on whether the actual act of casting out and catching a fish is fun to do. Most fishing games have you casting and reeling constantly, just like the pros. Fly fishing on the other hand is a bit more nuanced. Here, you’ll line up your cast and then start swinging the pole around by moving the mouse back and forth while holding the left mouse button. When you release, it goes in the direction you aimed and the distance depends on how long you were swinging. With practice, you can get reasonably precise with this process.

Instead of reeling and twitching spinners or poppers, your goal here is to let your fly drift through the body of water, looking like a tasty bug on the surface. This means that the location of your cast is really the core of what determines whether you catch a fish. You also have to take into account how you use your equipment. Casting right on top of a fish will generally spook them, ruining your chances.

This falls apart a bit when I didn’t really ever have to worry about ‘catching the wrong fish.’ You have to set the hook to start reeling anything in. This resulted in me ignoring bites from smaller fish and just waiting for the fly to drift to larger ones. One thing that usually makes fishing games challenging is actively avoiding going near smaller fish in an effort to lure in the big ones. That element would work well here, but it’s not part of the design.

Once caught, reeling in a fish is a bit underwhelming as well. The only goal is to keep a meter in the green to prevent either letting it get too slack—resulting in the fish getting loose—or too tight and having the line break. You manage this by reeling intermittently and moving the pole between vertical and horizontal to determine how much pressure you’re putting on the line. After unlocking the one additional pole available in the game, I didn’t lose a single fish during the rest of my playthrough.

Keep it or throw it back?

I am a bit on the fence with River Legends. I love the premise and a lot of the visual design. The core gameplay is enjoyable to a certain degree, but it just feels like it could be so much better.  Unlocking everything so quickly took a lot away from the game. The small number of poles, lures, and other items make it feel arbitrarily limited. There could also be much more to explore and discover without compromising the game. There could even be some kind of degradation or loss of lures/poles/whatever to make the game more replayable.

Completing so much in such a short amount of time works fine for a fishing game you play on your phone during a commercial break or on a short bus ride. It’s different when you sit down to play a game on PC. You want it to feel significant then…or at least challenging. I do like River Legends, and I want to play more of it. I just can’t see a reason to right now. It feels like the start of a fishing game rather than the entirety of one. On top of that, it’s $15 on Steam, which seems ridiculous. It’s only a few dollars less on itch.io. The phone version is just $5.

If you want to play it and probably enjoy it the most, just buy it on your phone. From there it will probably look the best, play the best, and feel like a better value proposition.

Also, it would be nice if there was music throughout the game. The music on the menu is very pleasant. I think that if it was available (even as an option you could turn off), it would make the game even more relaxing. The ambient nature sounds are decent, but music would be much better.

Do you plan to check out River Legends: A Fly Fishing Adventure? Would you try it on PC or mobile? Leave your thoughts in the comments below.

If you’re interested in more games with pixel art, check out our reviews for Moonlighter and The Darkside Detective.

River Legends: A Fly Fishing Adventure is as shallow as the waters you fish in, but it does have a decent fishing experience. It is definitely better served as a mobile experience than on a PC - and more appropriately priced there too.