Makoto Shinkai’s Next Film Gets Japanese Release Date and Trailer 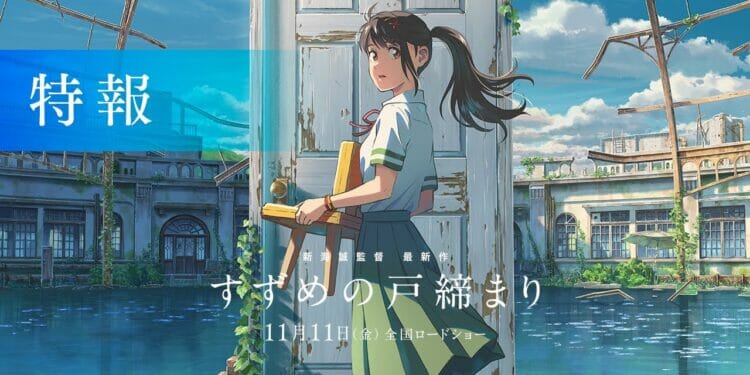 Animation studio CoMix Wave Films recently revealed a teaser trailer and new key art for Makoto Shinkai’s highly anticipated film: Suzume no Tojimari (working title). The film is scheduled to be released theatrically in Japan on November 11, 2022. The upcoming film follows his previous two blockbusters, “Your Name.” (2016) and “Weathering with You” (2019).

“We must think about how to close the many doors we left open. I’ve bestowed that responsibility upon Suzume as she travels across Japan closing various doors. It is my sincere hope that this film leaves its audiences with big smiles and excitement as they walk out of the theater.” 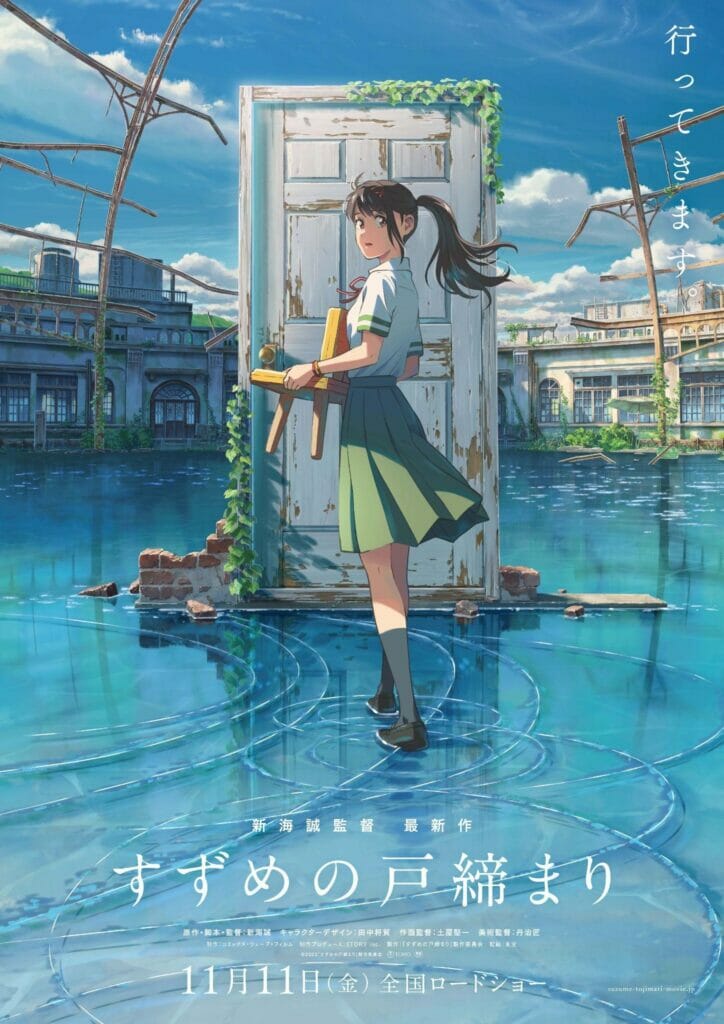 Additionally, a sneak peek of a frame from the film will was also shown. In it, a small and forgotten destination hot springs town can be seen. A ryokan-style inn lies derelict and abandoned, the rooms overrun with curling ivy, signs pitted and rusted… Suzume walks through this desolate scene in what Makoto Shinkai describes as “A story about closure.” Accompanied only by a simple “I’ll see you later,” the revealed key visual features Suzume with her hair up in a ponytail, standing in front of a door holding a small wooden chair with both hands, about to depart on her journey. The water ripples ever so slightly at her feet as the door is cracked open.

17-year-old Suzume’s journey begins in a quiet town in Kyushu when she encounters a young man who tells her, “I’m looking for a door.” What Suzume finds is a single weathered door standing upright in the midst of ruins as though it was shielded from whatever catastrophe struck. Seemingly mesmerized by its power, Suzume reaches for the knob…

Doors begin to open one after another all across Japan, unleashing destruction upon any who are near. Suzume must close these portals to prevent further disaster.

The stars
The sunset
The morning sky

Within that realm, it was as though all time had melted together in the sky—

Drawn in by this mysterious door, Suzume’s journey is about to begin.

Suzume no Tojimari is scheduled for a Japanese theatrical release on November 11, 2022.

Are you a fan of Makoto Shinkai’s works? What do you think of this upcoming film? Let us know your thoughts in the comments section below.

Demon Slayer: Kimetsu no Yaiba Anniversary Event to be Held on April 16th and 17th

[…] and CoMix Wave recently revealed a new trailer for Makoto Shinkai’s upcoming film, “Suzume,” which also reveals for the first time Nanoka Hara’s performance in the lead role of Suzume […]