Beast Complex is a collection of short stories that was the first-ever published work of Paru Itagaki, the mangaka behind Beastars. It also shares the same universe and serves as a precursor to the award-winning series. It’s quite hard not to notice this as they both also share the same unique art style. However, I find Beast Complex a lot more interesting and entertaining to read not only because it adapts my favorite anthology format, but also because it takes a closer look at the structure and nature of this complex world Itagaki has created.

The manga is a collection of six short but thought-provoking stories. It focuses on the odd relationship between the carnivores and herbivores who in this world, are forced to live in harmony.

Introduction: The Lion and the Bat

The first story is that of The Lion and the Bat. We’re introduced to Raul, a young and exceptional lion who’s good at sports, academics, and people pleasing. However, he quickly realizes he’s unhappy in his current state as he’s forced to live his life a certain way to live up to people’s expectations of him. A lion is prideful. He’s noble, respected, trusted, and at the center of awe and admiration. Living up to these expectations proves to be a heavy burden on the young lion, but one he must carry regardless.

One day, Raul is asked by his teacher to seek out a recent dropout named Azmo and convince him to return to school. Raul is unsurprisingly reluctant but is ultimately forced to after being tempted with a stellar letter of recommendation for a college he’s pursuing.  Once he eventually locates Azmo, the two do not see eye to eye at first. However, with a bit of patience and kindness, the two eventually become friends and even learn a lot about each other. At the end, we as the reader, also come to understand these characters and their motivations.

This story serves as an excellent introduction and sets the theme for the manga. It shows us how both herbivores and carnivores are forced to act a certain not only to stay true to their nature but also to maintain harmony in the community, despite some making it difficult to do so. 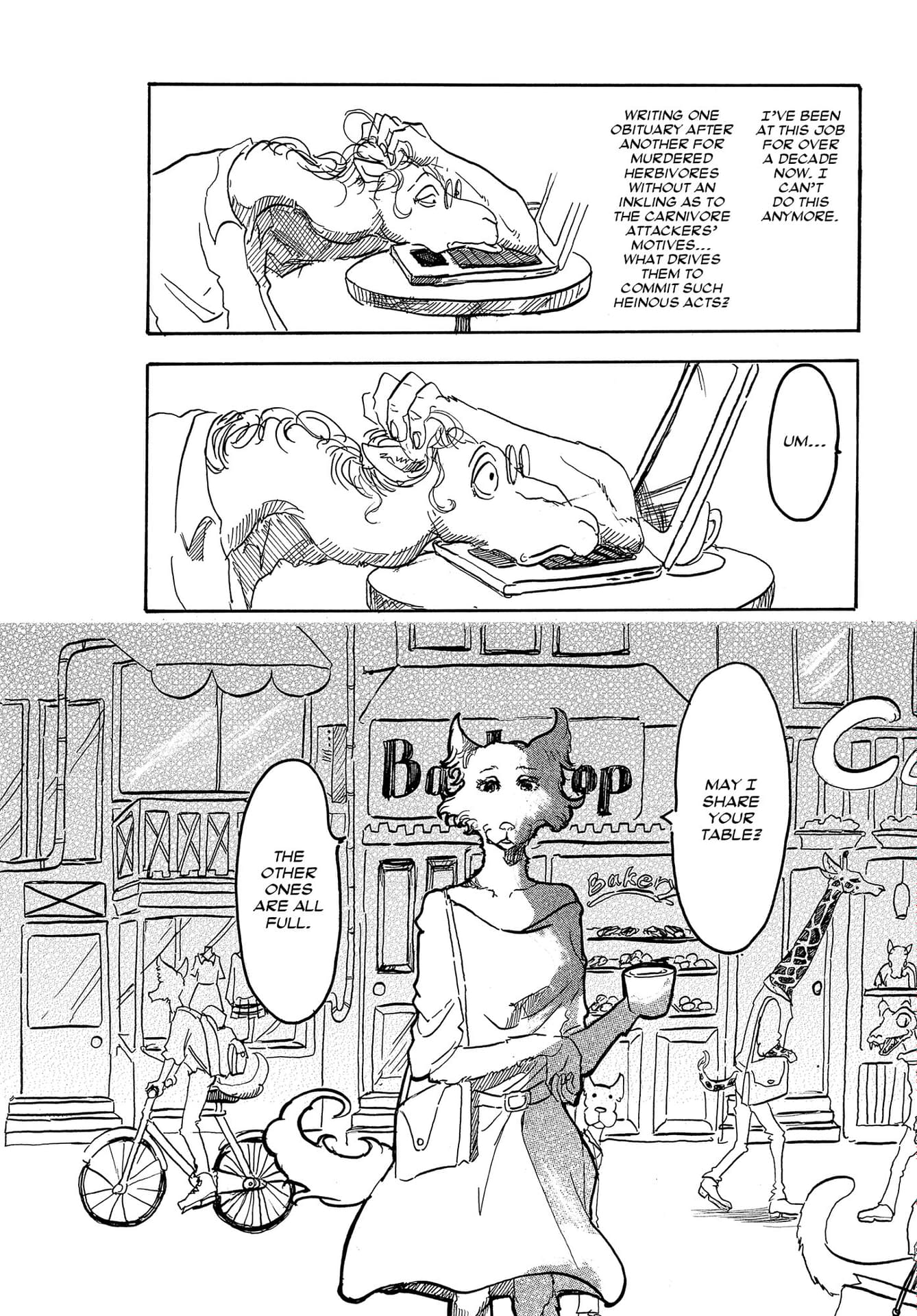 The second story tells the short tale of a young tiger named Gon and a beaver named Gomu. These two are childhood friends and schoolmates, but unfortunately, after turning ten, they (as well as the other animals) are forced to live in separate dorms in other to avoid conflict. Regardless of the rules, Gon decides to go over the wall separating the dorms every day to hang out with his friend. One day, they encounter a group of carnivorous bullies harassing an herbivore and attempt to stop it. This event helps in strengthening their friendship and convinces the reader that both species can, in fact, be friends despite their differences. However, we’re also told that they’re both still very young and are prone to drifting. Though their adventure together makes this a little less likely.

I found the third story the most fascinating as it tackles a subject also seen in Beastars. It follows a male camel named Garom and a female wolf named Abby and their strange and spontaneous night together. The story explores the thin line between lust and hunger for carnivores. Like the relationship between Haru and Legosi of Beastars, Abby is drawn towards Garom emotionally and physically, but with an animalistic attraction akin to that of predator and prey. It’s clear that she confuses the two, and unlike Haru and Legosi’s attraction, Abby expresses her feelings the only way she knows how.

While this story is very much thought-provoking, it felt a bit incomplete as it doesn’t fully explore the subject it presents. Granted, the story’s brief structure doesn’t help.

The fourth story is perhaps the saddest as it depicts the unknown dangers involved with being a carnivore. It follows a middle-aged kangaroo hotel manager and a young, mysterious, black panther who shows up one day to find solace in his hotel. The kangaroo finds the panther stranger with each passing day and eventually figures out that’s she’s involved in some shady dealings.

This story further proves how carnivores are forced into acting a certain way and doing certain things either due to their biological nature or just because they’re carnivores, even when they don’t want to.

The manga becomes a lot more self-aware in the fifth story and follows two middle-aged chefs in a cooking show. Luna is a gazelle and Sous-chef who’s been in the show for a while now, whereas Benny is the new crocodile head chef with a dark sense of humor. Benny’s involvement in the show visibly makes Luna uncomfortable, and his constant jokes and comments about savory meat don’t help. However, what makes this the most entertaining story is how these two characters candidly argue about their fears, differences, and the natural animosity towards one another and between carnivores and herbivores in general, without holding back. This reassures us that the readers aren’t the only ones aware of how strange this world is.

The final story is that of the young interspecies love between a red fox and a chameleon. The chameleon is reserved and always hides his face when his around his crush, the confident and intelligent fox. It’s clear to see that these two are very different people, but watching them overcome their struggles together is a very heartwarming experience. While this story shows us the innocence of these two members of different species and opposite sex, as well as their individual burdens, it noticeably does not outline any points not already brought up in previous stories. 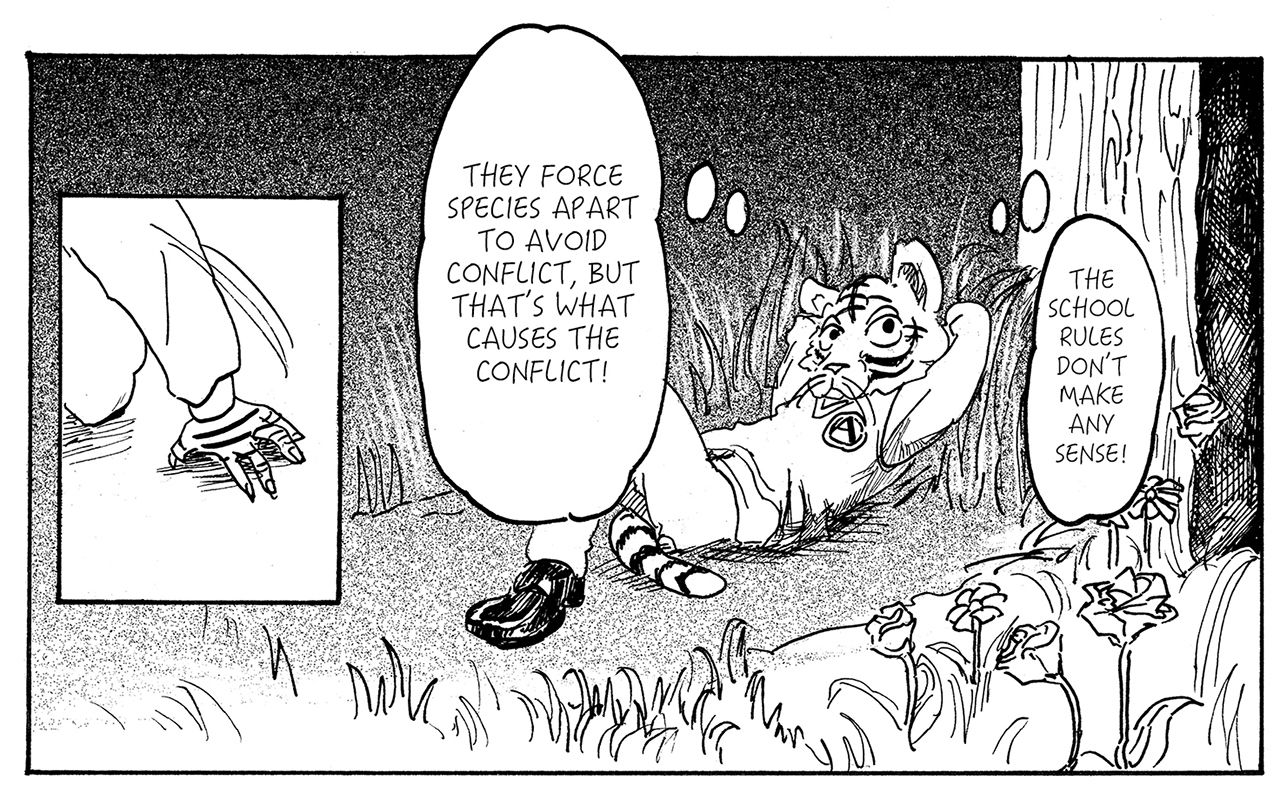 Overall it’s pretty easy to notice the common trend between each of these stories. The carnivores are constantly struggling to keep themselves in check in fear of being ostracized by herbivores for being themselves. In some cases, they’re even forced to take drugs to remain docile, as seen in Beastars.

On the other hand, the herbivores are constantly in fear no matter what the carnivores do to maintain peace because, again, it’s their biological nature and instinct to always be weary. Though this coexistence makes it more challenging when they make insensitive comments like “she’s baring her huge fangs,” “he’s getting bigger,” and “you look like a monster.” There’s even a term for this; carnivore harassment. However, as each story starts with a devouring, you can’t really blame the herbivores for always living in fear.

I’ve always found it odd that this world forces animals of different species to interact with one another, knowing very well it’s a recipe for disaster. However, it also makes sense that the animals are forced to coexist peacefully as, without harmony, they can’t fully evolve or progress. 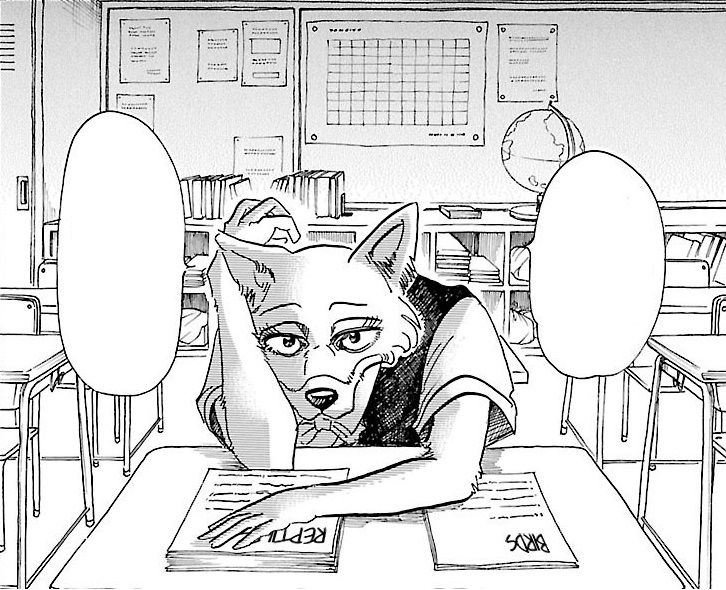 As you can probably tell from this review, I find Beast Complex fascinating, thought-provoking, and entertaining. Itagaki did an excellent job of making these characters endearing by expressing them in an honest and human-like manner. Her art style is also by far one of the most unique I’ve seen. Her illustrations are simplistic yet eye-catching, and the character designs and environments are crafted with thinly drawn lines and sketches that look like work of art. Her modest art style is synonymous with her work and is quite easy to point out, which is yet another reason as to why I enjoy her works. All in all, if you’re a fan of Beastars or simply like to be entertained in general, then I implore you to check out Beast Complex.

The first volume of Beast Complex is available to purchase right now from VIZ Media.

Have you read Beastars? Are you a fan of the series? Let us know your thoughts in the comments section below.

Beast Complex is fascinating, thought-provoking, and entertaining. Itagaki did an excellent job of making these characters endearing by expressing them in an honest and human-like manner, and her art style is also by far one of the most unique I've seen.