Mechs, in general, have always been some of my favorite things in science fiction. The numerous games I’ve played involving these towering metal monsters exist across the full spectrum of quality, from ‘pretty bad’ to ‘exceptional’. Piranha Games has delivered a healthy dose of mediocrity with their execution of MechWarrior Online, so I tried to keep my excitement suppressed going into MechWarrior 5. Somehow, though, I was still a little disappointed. 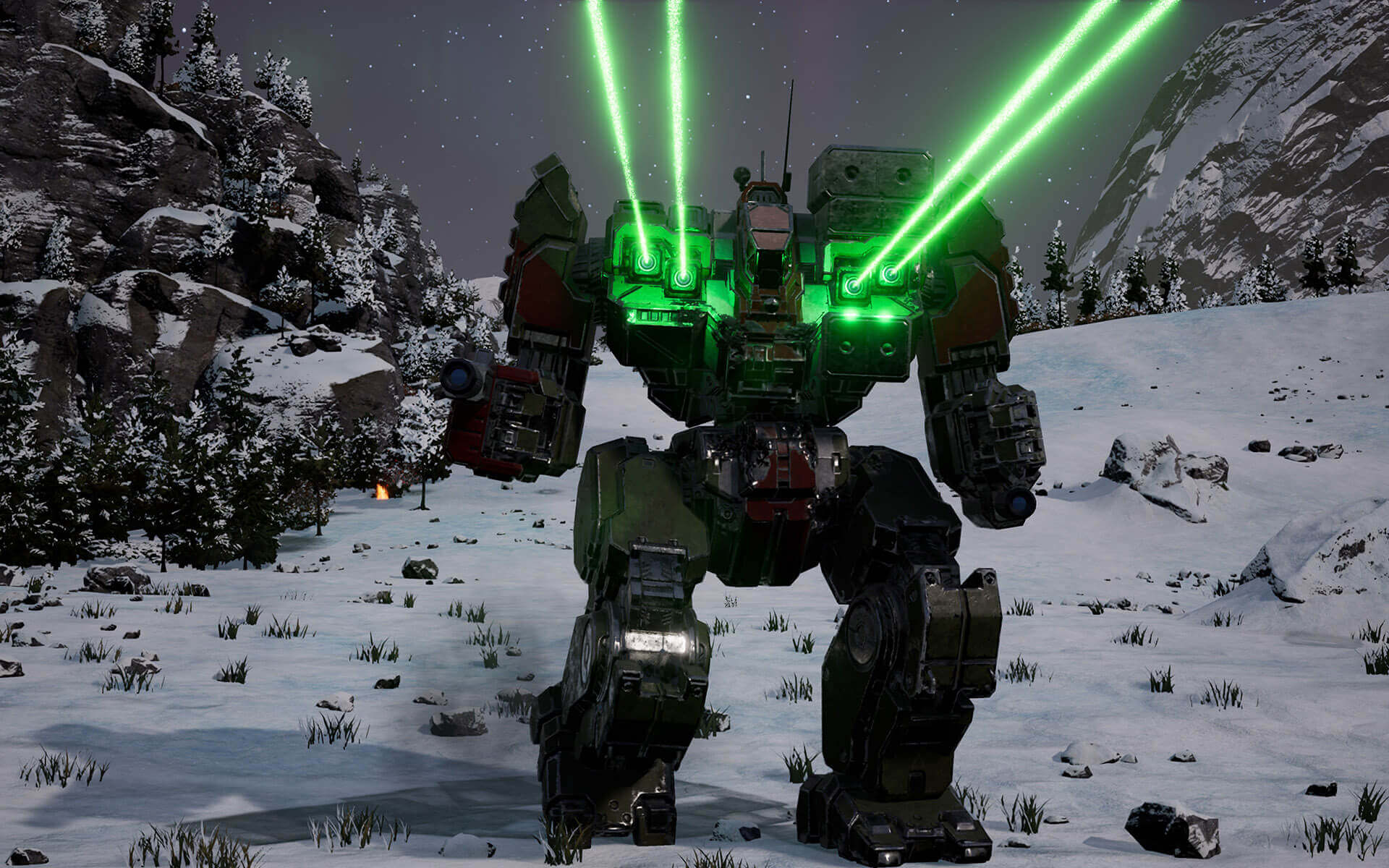 MechWarrior 5 rests on a solid foundation – the core combat. The movement of the mechs, functionality of the weapons, and how battle generally works is great. Moving around in these behemoths feels like a huge undertaking as you take time and effort to speed up and fight inertia to slow down. Turning your torso and arms are some of the quickest movements you can do and yet they still lag behind your cursor when trying to aim.

The movement is only part of it though. Every bit of the mech combat system is what a fan of the series would expect. You’ll be volleying various lasers, cannons, and missiles at specific parts of your target trying to slowly render them less combat-capable and ultimately destroying them.

Parts will show damage and slowly deteriorate as you rip away armor from their frame until the components break off with spectacular explosions. These are undeniably some of the most enjoyable parts of the game and the most visually appealing of any mech game currently out there.

If the game was boiled down to this alone and there were no other aspects to consider, it would probably be an acceptable (albeit kind of bargain bin) type of game. However, when you include the numerous issues in the game and the rest of the clunky features, the mech combat ends up being one of the only respites in the experience. 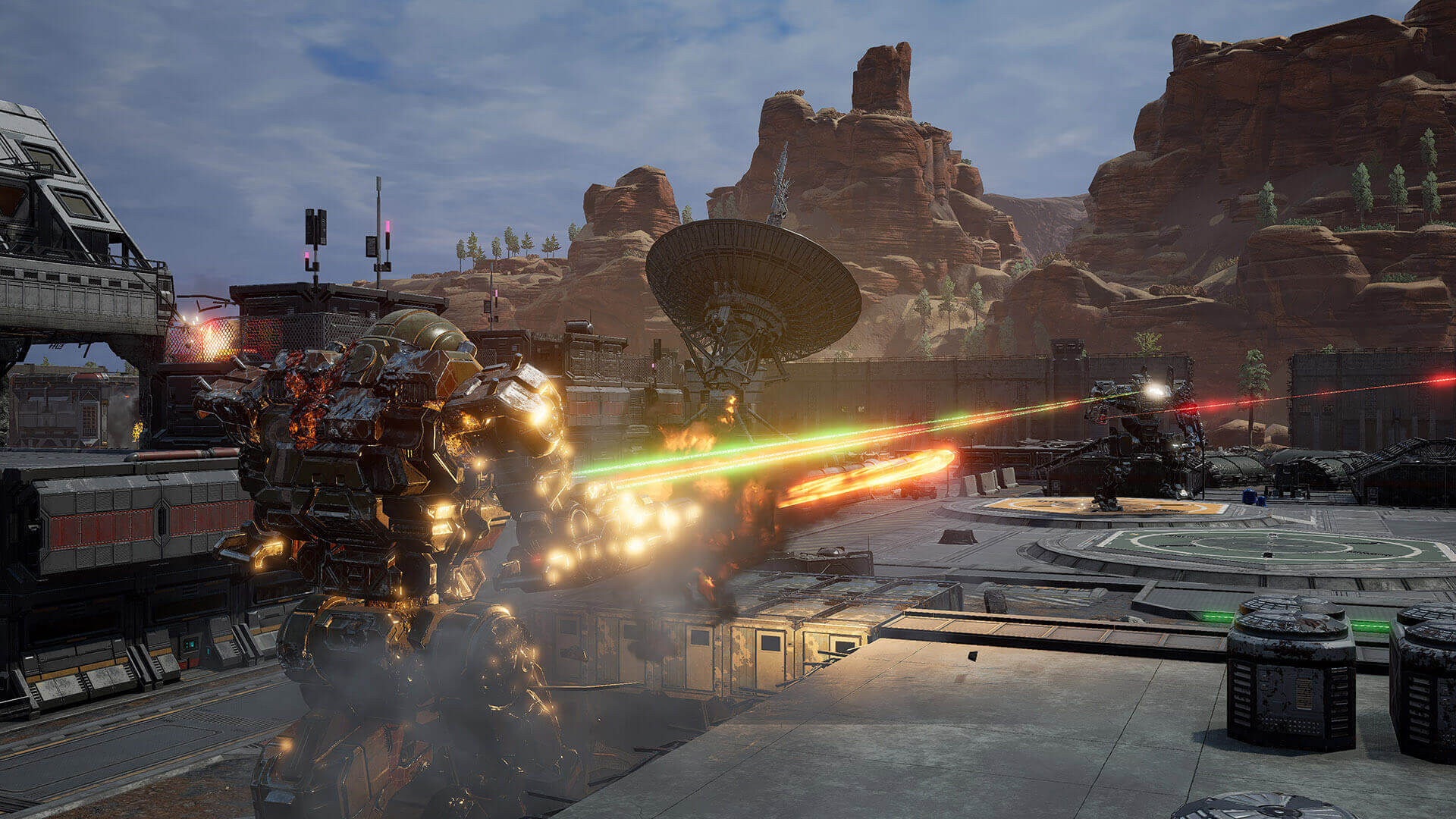 Bugs are only part of the issue, but when they pop up it can be very frustrating. There would be times that I would kill a mech only to have it ragdoll and flop around or comically fly across the screen. At times, mission objectives would seemingly not work due to some trigger I would have to achieve to spawn a final enemy or reach some arbitrary area. Also, on several occasions, my AI squadmates or enemy mechs would stick on terrain – unable to move or navigate out of it.

AI, overall, seems to be a big problem in MechWarrior 5. I’d often have one or more members of my squad hundreds of meters behind me either stuck or moving slowly. Even piloting the slowest mech available and having my squad in mechs of equal or faster speeds didn’t help.

This was especially problematic since enemy AI seems to favor attacking the player and will bombard you while your squad slowly catches up. Other times your squadmates will crush the very buildings you were tasked with protecting for a mission. Even the enemy AI would exhibit similar buggy issues.

Spawning enemies would appear all over the place. Usually they would pop up randomly behind you where you just traveled, but sometimes they’d appear before your eyes like David Copperfield just pulled a sheet off of them. They have moved this “ambush” spawn mechanic distance further back in a patch, but it still feels broken after updating.

The swarms of tanks,  helicopters, and small mechs were frustrating, but their sudden random appearances made it much worse. Even when mechs came in on dropships, the placement seemed designed to annoy the player rather than make tactical sense. 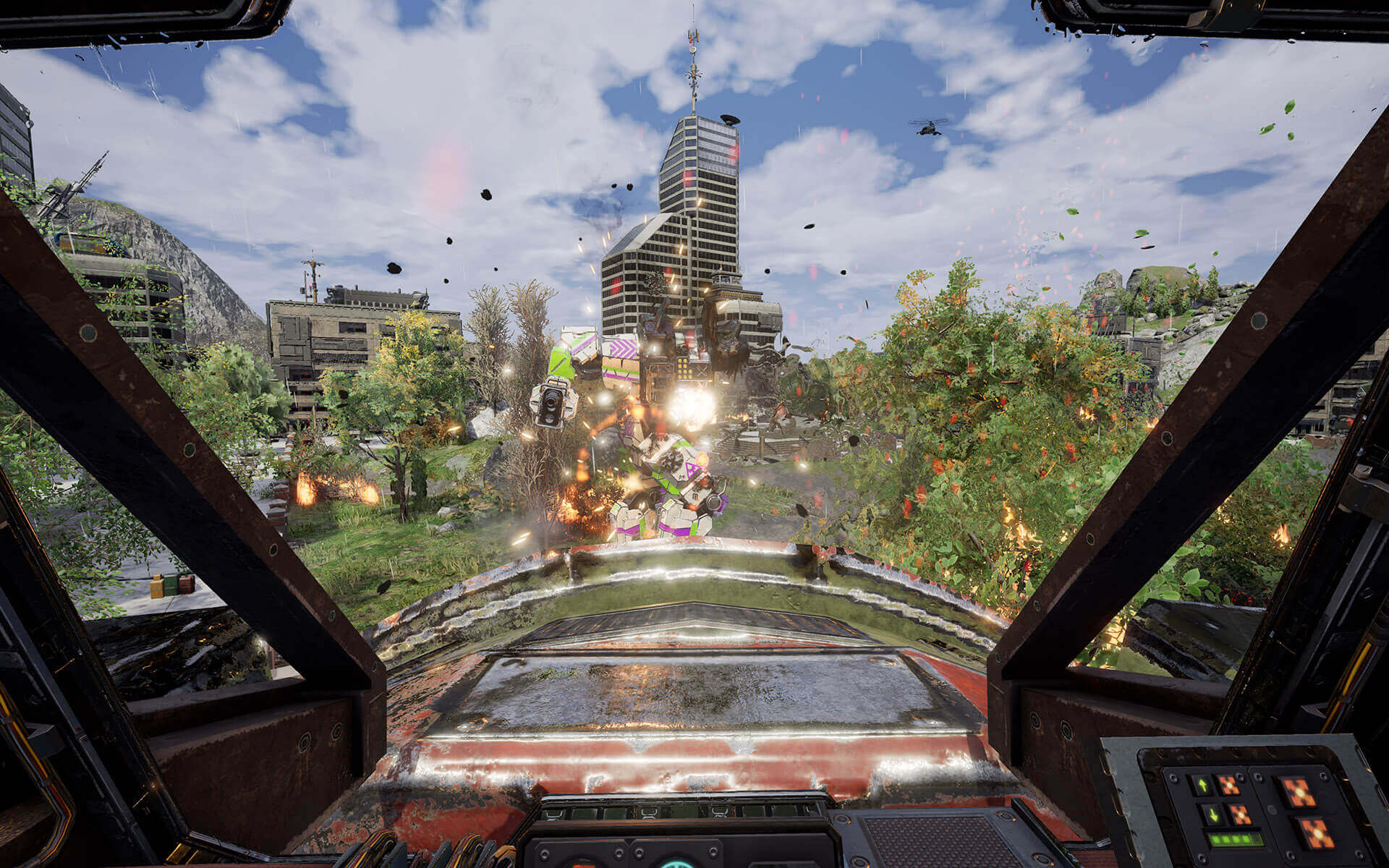 There are great stories throughout the Battletech universe. The dozens of books within this realm should be a testament to that. The recent Battletech game from Harebrained Schemes even takes advantage of this by putting you right in the middle of the drama between the Houses and giving you a rich cast of characters to go with it. MechWarrior 5 does virtually none of this.

Aside from perhaps two or maybe three small cutscenes, a single person tells the entire story from across a glowing table. Every so often one or two other voiced characters come in to provide equally dry paragraph readings from their near-frozen character models. If that isn’t enough, the scope of the story ends up being rather small up until the very end – where it leaves things feeling unfinished with promises of “we’ll find out in the future.”

Lifeless dialogue isn’t the only issue though, the entire atmosphere of the main base/dropship feels like it’s frozen in time. Silent characters that presumably fill basic roles like security and mech repair stand motionless around the ship. They do not interact with the player in any way. Virtually nothing in the ship is interactive beyond several consoles that take you to the same management menu. 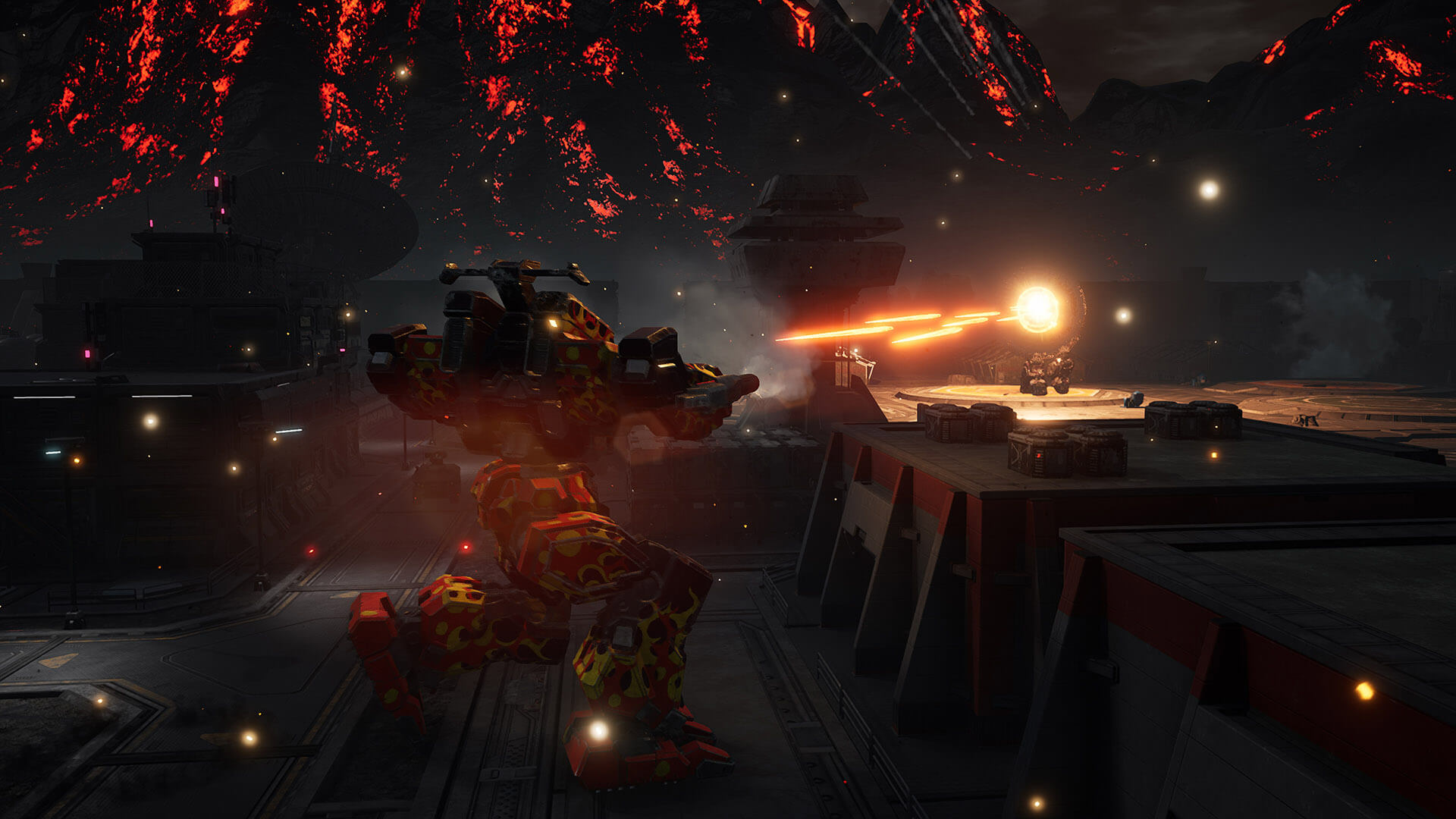 Much like collecting a broken twisted mech torso in the game, there is still the potential for something good here. The core gameplay and mechanics are solid and the game has some great effects and great destruction physics across mechs and buildings.  When compared to what Battletech delivered in 2018, the sub-par management portion of the game is much less robust.  Given enough time, MechWarrior 5 could become a much better experience.

However, as it stands, the annoyance of the problems listed above can’t be ignored. What makes it worse are the numerous load screens when traveling between systems and overall slow progression through the game’s campaign. The heavily padded 21-mission campaign structure requires numerous regular missions to build reputation and resources.

Even the extra reputation earned through special “high reward” missions isn’t enough to make it feel adequately paced.  I tried to move somewhat quickly in my playthrough, but I was stacked with money and resources by the end because of how many padding missions I needed for reputation.

MechWarrior 5: Mercenaries is fun to play when you are in your cockpit duking it out with other mechs. That’s where this game shines most of the time. The problem is that half of the game involving the story and management feels inferior to Battletech. There are issues here that can and should be fixed with patches, but we’re relying on Piranha Games to do that, so who knows when or if it will happen.

MechWarrior 5: Mercenaries manages a functional and enjoyable mech battle experience, but has many issues holding it back from being as good as it could be. Lackluster story, slow campaign progression, sub-par AI, and some notable bugs leave the game feeling unfinished even after its first patch.