Necromunda: Hired Guns is a War Hammer game that takes heavy inspiration from Doom: Eternal. Focusing on mobility, gunning down hordes of enemies, listening to rocking music, and using a variety of weapons. Sounds exhilarating and it defiantly can be, but there is one major problem preventing it at times: It’s severely technically flawed. Almost making it impossible at times to enjoy the core game mechanics. Which is shame because the story, world, and characters won’t be picking up any of the slack. 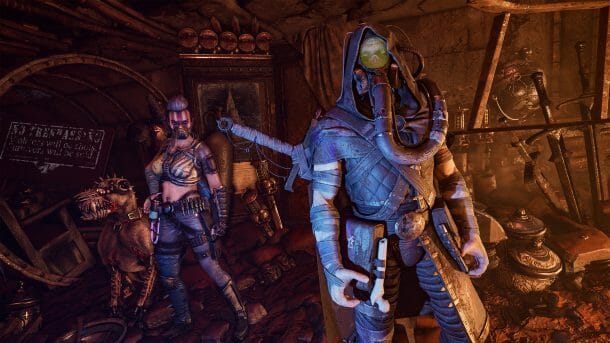 Full disclosure, I’m not familiar with the War Hammer franchise. I know it exist, but that as far as my relationship with it goes. I was hoping that Necromunda: Hired Guns would be a great introduction to the War Hammer universe, sadly, it is not. The story and characters are extremely forgettable and is not worth diving into. Story arcs barely exist, characters are one-dimensional, and some parts of the lore isn’t explained very well. Perhaps, if I was a War Hammer fan, then maybe I could enjoy the narrative and references, but I doubt that would help.

Closing Thoughts: I wanted to love Necromunda: Hired Gun for it’s fast paced gun play with fun mobility like Doom: Eternal. However, with it being extremely technically flawed makes it quite troublesome to enjoy. Doesn’t help no efforts was put in the story or character department. I would wait for them to patch the game up before buying. If they do get around fixing the game’s technical problems, then I can see this game being a six out of ten.

Check out our other content! Including podcast episodes and the latest game reviews.

Rip space a new on in SPACE PUNKS