Fighting games have been getting a lot of attention as of late, with several of them getting DLC releases. These include things like Guilty Gear Strive’s Baiken DLC in January, and BlazBlue Centralfiction’s rollback netcode update for Steam last month. New game releases are also on the horizon, like DNF Duel this summer.

This brings us to today’s topic, being Phantom Breaker: Omnia. This game… is a fighting game in name and functionality, but a lot of OTHER problems and decision-making tremendously waters down a game that has the potential to be relatively good. Let’s reveiw why Phantom Breaker: Omnia, at least on the PC version, is easily a very bad PC version.

Can I Function In The Menus, Please???

The PC version’s problems start the second you get to the title screen. You’ll press the A (or X on PS4) button on your controller and, oh, wait, it did nothing. That’s because the B (O button) button is considered the A button in-game. It gets worse. L2 and R2 are not mappable at all, and are stuck to the Select and Start buttons, the X (Square) button is your B button, and the A button (X button) is actually the X button for Xbox. Strangely enough, the Y (Triangle) button functions as normal.

This extends to actual gameplay, and is actually BAFFLING. Also, keyboard controls are either, you start the game and go past the title screen with the keyboard, or you can’t use it at all in-game. Also, if you want to pause the game, thanks to L2 and R2 being mapped to Select and Start, you are NOT able to. At all, unless you have a controller with an L3 and R3 button, which is just…what?

Grievances with the control functionality aside….. Let’s dissect the ACTUAL gameplay and get on with our Phantom Breaker Omnia review. 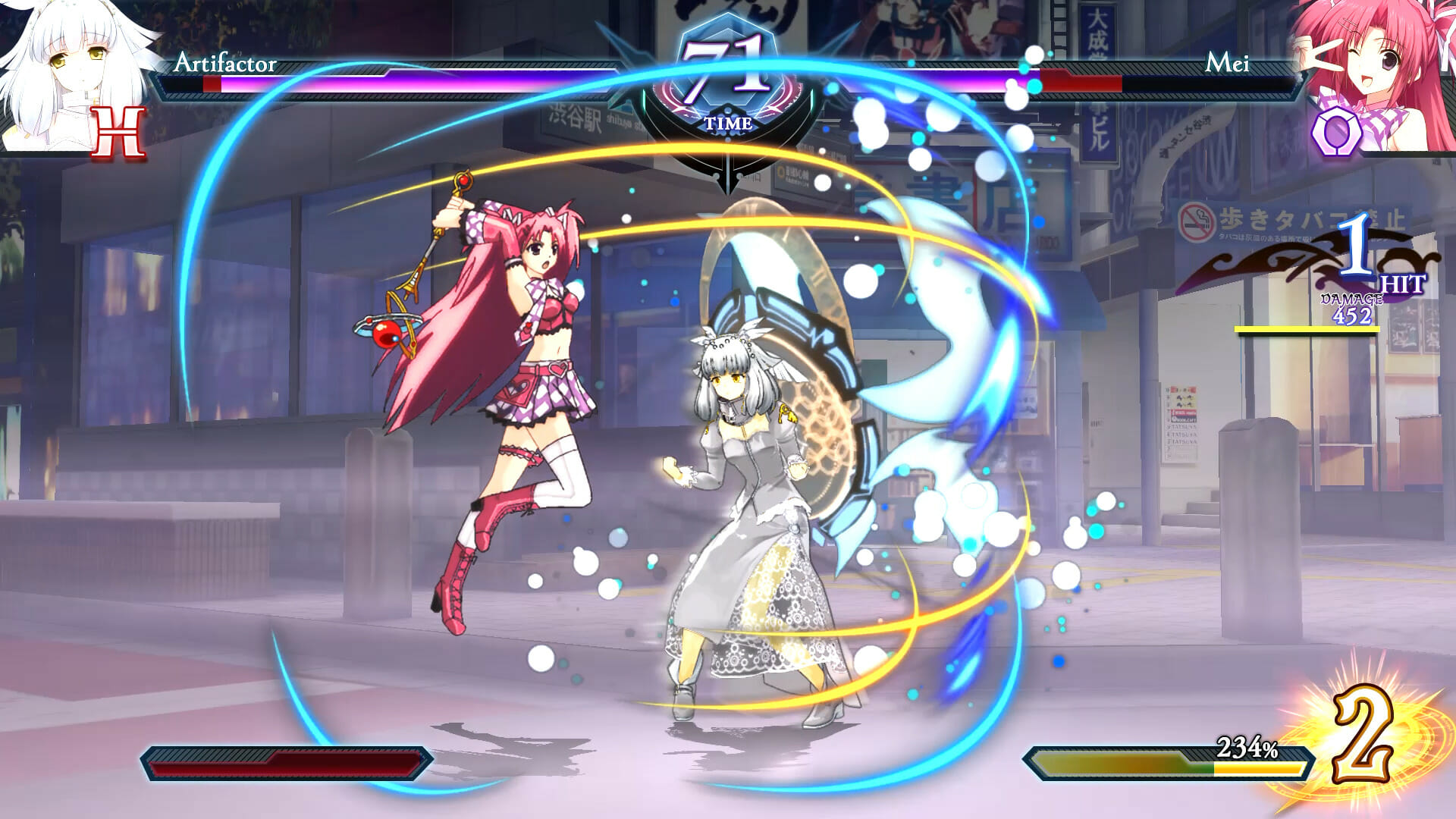 The game allows the player to select from three styles when selecting a character. First off, there’s Quick Style, which functions like Simple Mode in Marvel vs. Capcom 3. Quick Style allows players to repeatedly press a button to string together combos and other attacks, essentially allowing players to perform flashy combos with minimal effort.

An interesting note is that the very first version of this game comes several months after Marvel vs. Capcom 3 originally released in February 2011, so it could be assumed that this and MvC3 are the main two games that introduced auto-combos. Simplified controls as a whole, that distinction goes to BlazBlue: Continuum Shift in 2009 with its Beginner Type (which would later be known as Stylish Type).

Hard Style is essentially the far tankier version of a character. It gets access to a unique back+M input, but only has one auto combo. This style also gains hyper armor on the Overdrive mechanic, and sports very high base damage. This style also provides regenerating health when in Trigger, and so does Quick Style.

Third of all, there’s there’s the Omnia Style, which functions as a general stat booster for characters, but scraps most of the more unique mechanics.The mode also provides you with four meters to spend on Special Moves instead of two, giving you more of an emphasis to use them on EX Specials and Supers. Supers in Omnia Mode also have invincibility on startup, unlike the other two, but does not regenerate health.

If you would, you could liken it to how Guilty Gear Strive treats some of its returning characters, stripping things away for the sake of simplicity, which brings us to…

On further review Phantom Breaker Omnia is a simple game that has way too many mechanics. Burst, Overdrive, Critical Hits, Guard Breaks, it’s essentially sensory overload. A game that’s this simplistic, down to its very core, does not need 20,000 mechanics permeating its design to say that it has “depth”.

Character archetypes are plenty to make a game have depth. You can have rushdown characters, grappler characters, zoning characters, mid-range characters, or characters based around a unique mechanic. The worse part is that this game does all of that. This is just asking for your newer players to be overwhelmed from the outset.

This is further juxtaposed by the fact that all of the characters lack traditional motion inputs seen in other games. This is a four-button fighting game, and has three attack buttons and a special move button, with Smash Bros.-esque command inputs, just direction and a button. Another major bother I have is that the tutorial is just bad for this type of game.

Most fighting games these days have an interactive tutorial to guide you through how some things work. BlazBlue does it, Guilty Gear does it, Street Fighter V does it, even Skullgirls does it. This game’s version of that is to have a section in the menus with tons of flashcard-like pages, basically rendering it to be little more than supplementary material. Let’s discuss said supplementary material. Let’s go and break down the rather long tutorial and why it’s both vague and partially lying to you. There’s a couple of aspects about it that are either vague or aren’t told to you at all, such as with Quick and Hard Styles regenerating health during Emergency Mode (as mentioned above).

The game also mentions Hard Style gaining access to Instant Kills, which, we’ve gone ahead and tested several different scenarios and have not noticed a difference in any of the supers used. No special cinematics, no unique animations, not even greater than normal damage.

Another thing is that it’s essentially copying mechanics from other fighting games. For instance, Overdrive is not at all  like the similarly-titled mechanic from BlazBlue. No, it’s essentially V-ISM from Street Fighter Alpha 3. Clashes are also functionally identical to how they behave in games like Guilty Gear.

For what it’s worth, the game tutorial has no reason to hide information or lie to you, and, in a future update, could include clearer information or clean up info that is either irrelevant or that talks about something that isn’t there. Well, all we can do is hope on that point. Maybe it could look to its peers and take a few ideas from them on how to improve their tutorial.

In the time we took to make our Phantom Breaker Omnia review, we tried the online, and well… it exists. That’s really all I can say about it.

Short words aside, a better explanation is deserved. The game functions on delay-based netcode, which, if you’ve been paying attention to fighting games for the past year and a half to two years, is a quintessential death sentence for your game’s community. Delay-based netcode dynamically alters your input delay in relation to the connection to the opponent.

Given that the game runs on that framework, it’s just asking for trouble playing online. Plus, the game ALSO lacks other features, like multiplayer lobbies, spectator functionality, online lobbies like Guilty Gear Strive’s, none of that. Just a Ranked Match leaderboard, and a Player Match system that allows for 1v1 matches.

It feels very… skeletal in comparison to the robust online features its competition has. 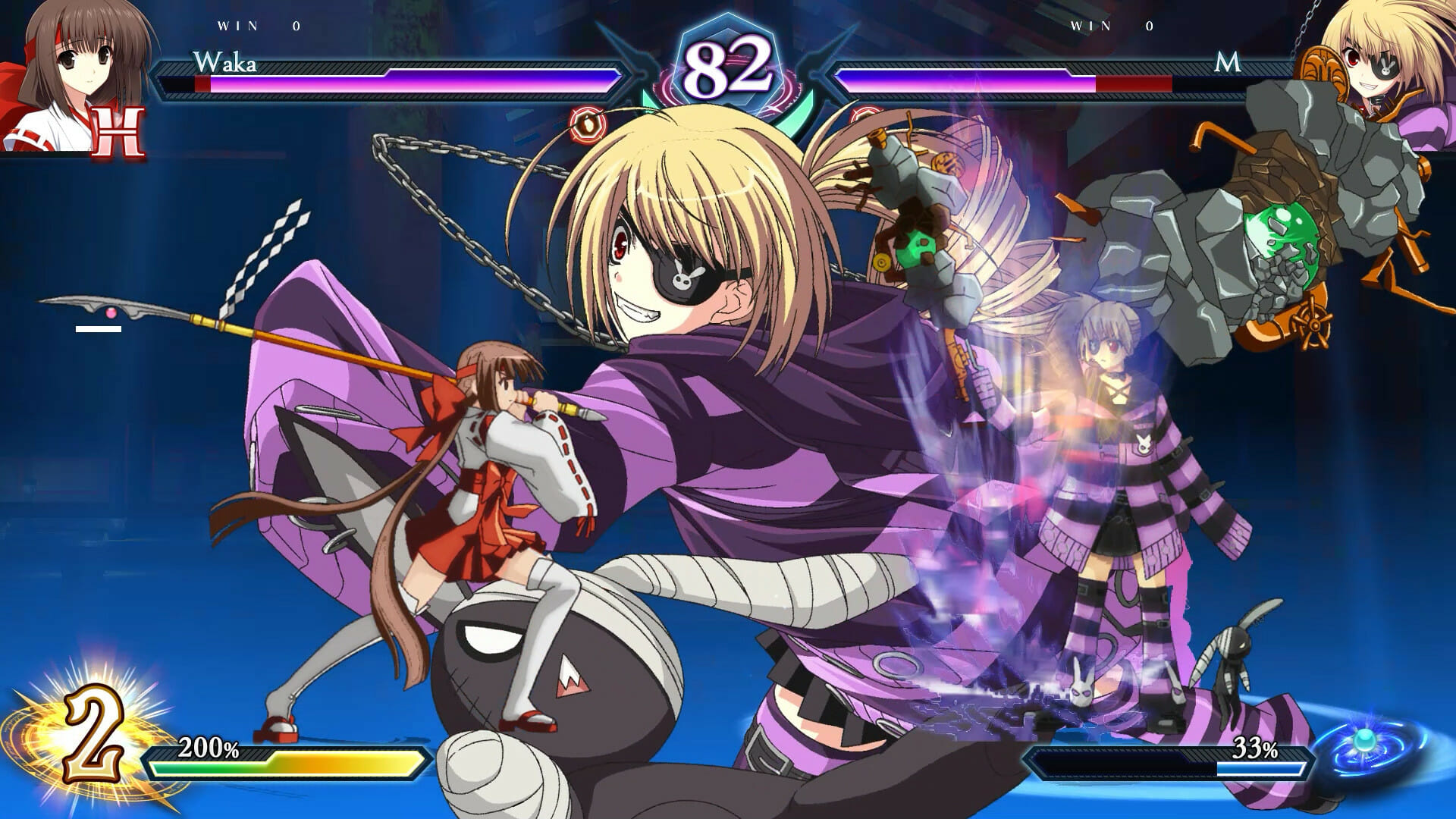 Phantom Breaker: Omnia, as scathing as I’ve been toward it, has a couple of positive marks on it. For one, the music is great. I could listen to it for most anything if I really wanted to. And secondly, visually, it looks very good and striking… sensory overload comments aside. There are a couple of missing animations, like no crumple stun animation. If it was left out intentionally, then we just shrug and move on.

Though, good music and visuals can’t save the game from being a bit overwhelming in nearly every other aspect. Making the game function properly without a DualSense controller, an inability to pause at all if you aren’t using one, too many mechanics that can overwhelm players and delay-based netcode muddying up an already bare-bones (and that’s putting it kindly) netplay infrastructure just make the entire experience a chore.

If you want a fighting game that both functions online and plays decently at the very least, you aren’t going to find it here. Play Guilty Gear Strive if you want those.

Phantom Breaker Omnia delivers on visuals and audio, but on almost everything else, this port falls a bit flat, especially in the controls department.