2D platformers, beyond Nintendo’s elbow nudging nostalgia, appear to me to be something of a rarity. Already one or two of you are likely poised to launch into the comments section to yell at me “ARE YOU SERIOUS?! You forgot Shovel Knight, Mark of the Ninja, and Axiom Verge exist?” Hang on, though, because I really just mean platforming on a 2D plane. No RPG elements, no Metroidvania exploration, and definitely no combat at all. There are still a few titles that fit this category like Limbo, but it is in a smaller niche group that I was curious about digging into as a fresh face to the genre. This, I admit, made me curious: can Poncho welcome newcomers into its embrace while also giving an enjoyable, fresh experience to those used to the genre?

Poncho is a 2D platformer by Delve Interactive about a small robot looking to find its way to a giant red tower to help save humanity from the calamity. How will it save humanity? What happened to humanity? What even is the calamity? You just don’t know, but everything in your circuitry screams that it’s the place you must go. So, in a similar way to how Mario was given a similar unwavering motivation and destination, you venture towards the tower.

In each level you are tasked with finding the exit gate over an enemy-less obstacle course of platforms, sometimes barred by coloured gates that you must find the keys for. If you don’t have the required key you can buy one from salesmen who are willing to sell you increasingly more and more expensive keys. Simple? Perhaps a little basic? Let me just slide one more part of the game into place gently:

While your movement is restricted to a 2D plane, you can leap to one of three background layers.

I just love that kind of design decision where a simple small adjustment really recontextualises everything. With floating platforms that change the layers on regular intervals and each layer presenting different platforms, Poncho demands you not only to make leaps horizontally but also along a Z axis. This is not only unique but also manages to–excuse the pun–add an additional dimension to the gameplay. While there are a few odd, mild frustrations of never quite being sure what layer the platforms will switch to next, the gameplay has been polished to a brilliant sheen.

This gameplay is layered on top of a world beaming to the brim with a charisma that also strays off the beaten path in unexpected ways. The aesthetics portray an apocalyptic world that hasn’t just descended into dirt, dust and rust, but instead has plant-life and charming robots take the place where humans once stood. As well as this, rather than the story playing out in what could have been the dull “YOU WIN AND SAVE THE WORLD!” fashion, you are presented with a choice between two options that both have positive and negative sides. Without spoiling it, damn I felt terrible either way I went; I felt bad partially because the graphical style just made me love the world and everyone in it so much more before the narrative pulled back on the leash violently.


Although Poncho does come with one problem that does make or break the game in two. Poncho, even at the $14.99/£10.99 price point, is 3 or 4 hours long. The reason for its short length is two fold I believe: Not only aren’t there many levels but each level is a bit on the short side. Even with the collectables, which is where the added length seems to be drawn from, the length of the game sadly feels a bit pricy for what you get.

There is also a risk that due to the accessibility of the game, making it a wonderful stepping stone into the genre, those who are veterans (the type who take Pit of Panga in Super Mario Maker as a challenge and not an exercise in bludgeoning yourself to death with a wall of difficulty) may find Poncho a bit of an empty breeze that is easy to just walk through. This is especially due to the use of a respawn feature that plops you back to where you leaped from previously if you fall to your doom, rather than anything like a health or life system.

P0ncho does end up a bit pricey for what you get and it could end up a bit simple for those who need that rush of difficulty. Despite this, and partially due to its simplicity which makes it accessible to newer players, it still feels successful. It may be because I mentally see Poncho less as a game to challenge your skills and more an interactive tale akin to To The Moon. It feels like the type of experience that lures you in with cute and heart-warming visuals and enough gameplay to feel like you’re doing something, and then uses the ending to emotionally gut-punch you when you least expect it. Although it probably plucked on my heart strings as well as it did due to how unexpected it was… Perhaps I shouldn’t have said anything and let players go in like blind sheep into the gut-punching factory…

…Nah, players would have probably spoiled that final emotional twist anyway in their excitement to talk about it… Funny how our excitement for a sudden turn spoils the suddenness for future players. 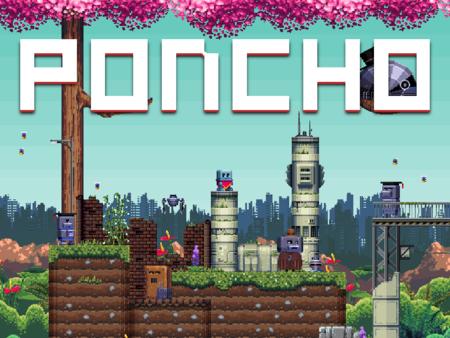