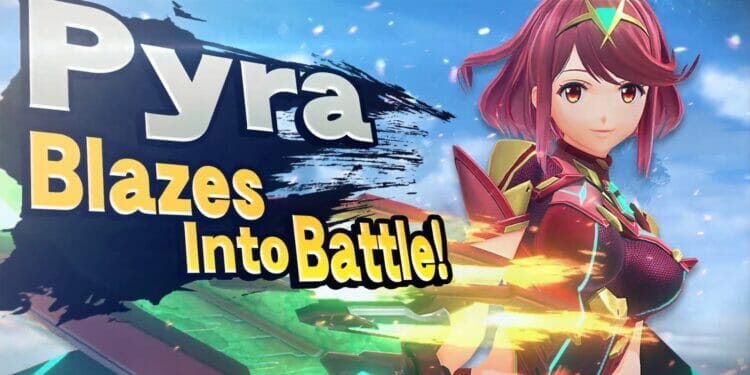 Pyra/Mythra from Xenoblade Chronicles 2 will now officially join the fighters in Super Smash Bros. Ultimate for Nintendo Switch. She is part of the Challenger Pack 9 DLC, which also includes a new stage and a selection of music tracks from Xenoblade Chronicles 2. Masahiro Sakurai revealed the new fighter in a recent video, along with her move set. He also took a closer look at the new Cloud Sea of Alrest stage.

Two Legends In One

The new Cloud Sea Of Alrest stage is based on one of the most recognizable settings in Xenoblade Chronicles 2. It is set on the back of the Azurda. It is a massive creature that swims through the Sea of Clouds. Azurda will show you the entire world of Xenoblade Chronicles 2 as you ride the majestic creature. If you pay attention you might be able to catch characters from the game.

Challenger Pack 9 is part of the Super Smash Bros. Ultimate Fighters Pass Vol. 2, now available for $29.99. The pass also includes Min Min from ARMS, as well as Steve and Alex from Minecraft, and Sephiroth from Final Fantasy. There will also be two more fighters that have yet to be announced.

You can also grab Challenger Pack 9 separately for $5.99. With the addition of Pyra/Mythra, this pack definitely seems worth grabbing for fans of Xenoblade Chronicles 2. That game is also available on Switch, so if you want a glimpse into the universe and you already own Smash Bros. Ultimate, this seems like a good opportunity.

Dragon Ball Super: Battle of the Battles Global Fan Event to be Held on March 27

Funimation to Release Violet Evergarden: The Movie in Theaters on March 30