We’re definitely in the renaissance of space sim games. The original Rebel Galaxy made some waves five years ago when it took the typical space sim design and turned it into something reminiscent of tall ships battling on the open seas in the 18th century.

Rebel Galaxy Outlaw took a more traditional path for this prequel with a fighter-focused structure rather than the lumbering capital ships of its predecessor. While it may disappoint some to move past that unique design choice, Rebel Galaxy Outlaw proves that it has much more to offer than cool broadside attacks.

You can’t get past the animated intro video without getting a sense of Cowboy Bebop ingrained in the aesthetic of this game. “Space Westerns” have gained a lot of prominence since the show’s popularity, and that was only enhanced by Firefly’s delayed but committed fan following.

Rebel Galaxy Outlaw takes a heaping spoonful of American western themes and accents and mixes them in with a game composition that is going to be quite familiar to some.

Those that have played the likes of Freelancer and Wing Commander are going to feel right at home with the tasks you perform and combat in which you take part. The game will have you warping around systems fighting off pirates, defending mining vessels, assaulting fortified space stations, transporting goods, scanning probes and transmitters, mining, and even doing some pirating yourself if you’d like.

While it’s possible to do some of this in the game peacefully, combat is clearly the intended star of the show here and Outlaw does it well. The weapons you can equip are less about constantly upgrading to slightly tweaked better versions and more about making the most effective use of your hard points and weapon grouping.

Having all energy weapons can drain your power pool leaving you not only unable to fire, but unable to recharge shields or boost away. Having all projectile weapons forces you into reloading cycles and most have much shorter ranges.

Balancing these out in addition to other gear within the limitations of each ship makes the experience feel less like more than just grinding for upgrades. Dictating what sort of role you want to play and the executing it is a refreshing design in this style of game. 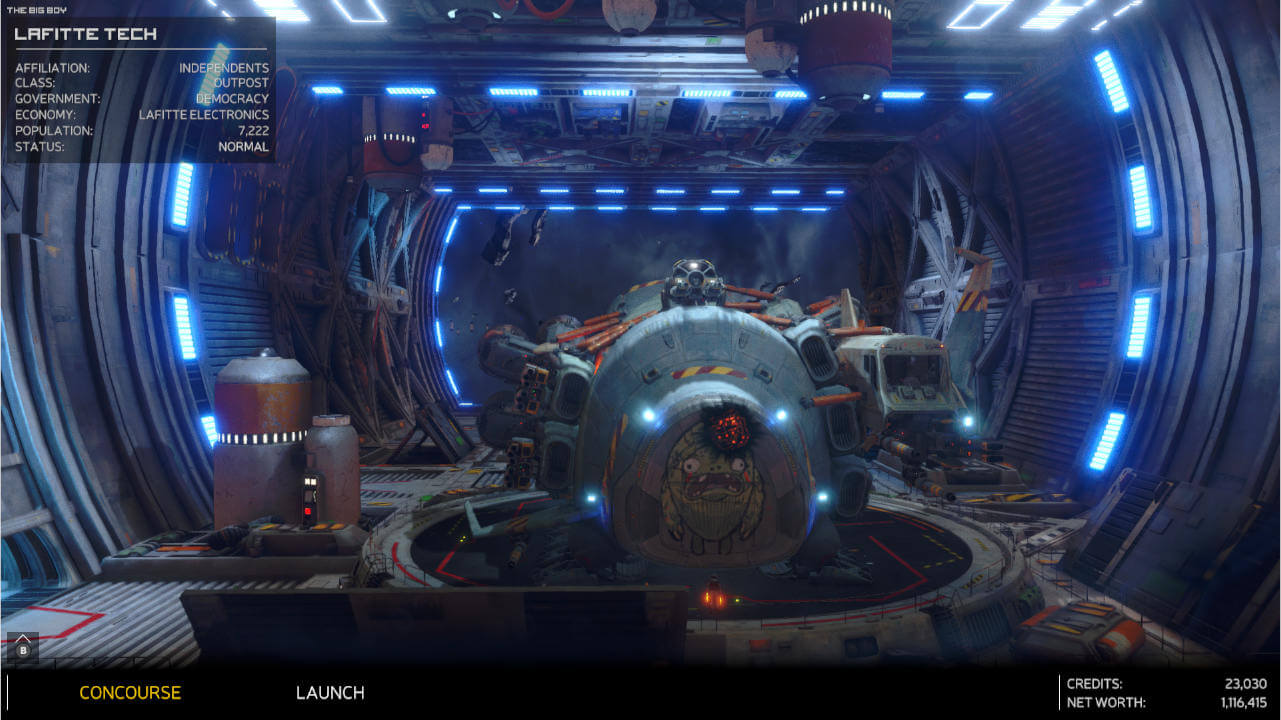 Who has a better story?

I had a hard time remembering what happened in the original Rebel Galaxy. This was partly because of the years it’s been since I’ve played it, but also because these open world (galaxy) procedural mission games can get you sidetracked from the main mission for hours.

However, I did remember that the protagonist’s aunt, Juno Markev, was a major part of all of that. In Rebel Galaxy Outlaw, you are now that character – only much younger.

Instead of playing out the same trope of being a space noob and working your way up, your goal as Juno is to chase down the person that killed your husband. In part of the intro animation, you see your ship being shot down as you crawl from the wreckage.

As soon as the game starts, you’re calling in a favor for a new ship to continue your efforts – and it just happens to be a piece of junk requiring you to put in the effort to upgrade and ultimately replace. It leaves plenty of room for the story to unfold without that “we need to do this immediately” vibe so you can rebuild your whole situation and get a ship that can isn’t terrible.

It’s easy to get off on a tangential path doing side missions that have no bearing on the main story. Especially when you’re met with an exceptionally profitable one that has you jumping through ten systems where you end up stopping to find even more missions to complete along the way.

When you do get into the story missions though, the design of each usually sets itself apart from the slightly repetitive side missions. However, one problem carries over from Rebel Galaxy that I found to be a bit frustrating in Outlaw…

I believe that, just as in the original, the stated difficulty of a mission is tied to some score generated from your ship equipment. It makes sense that it is set up this way, but it feels like the system may weight some ship parts or the ships themselves too heavily.

I found myself running into missions that were brutally hard that said they were merely “average” in difficulty. I’d then go to more aggressively labeled missions and breeze through them.

If it wasn’t for a very generous auto save system, I can imagine this issue would have been far more frustrating. I just don’t recall many games in the past where I’ve abandoned missions because they just seemed impossible given my current setup – and I’ve done that probably half a dozen times in Rebel Galaxy Outlaw

Rebel Galaxy Outlaw has many things going for it. Despite using a game engine that doesn’t stand out much, space flight and combat still look and feel wonderful.

The game also boasts an amazingly broad soundtrack conveyed through a radio station setup similar to Grand Theft Auto – complete with comedic advertisements for in-game products. It even has a solid ambient soundtrack if you turn the radio (full of licensed music) completely off.

The game as a whole is filled with lots of content fit for a playthrough lasting basically as long as you want it to – but at least 30+ hours. It has just the right pacing to make you want to keep playing for hours on end, even in spite of the frustrating mission moments.

It stands, in my eyes, as one of the premier single-player space sims out there right now for players less interested in constantly tweaking gear but still want a challenge.

You can even custom-paint your ship with one of the most robust drawing/painting tools I’ve ever seen in a game. It’s all there for a base price of $30. It’s a good deal and one that has a ton of potential to become an absolute must-buy deal depending on how far the developers are willing to go with additional content variety and fixing some of my relatively minor issues.

Squeezing into a cockpit surrounded by screens with actual gameplay elements on them has never felt so comfortable. Rebel Galaxy Outlaw pulls in old familiar space sim designs and whips it up with the aesthetic of the original game to create a light fluffy meringue of good times. Delicious.