“Villainy wears many masks, none so dangerous as the mask of virtue.” 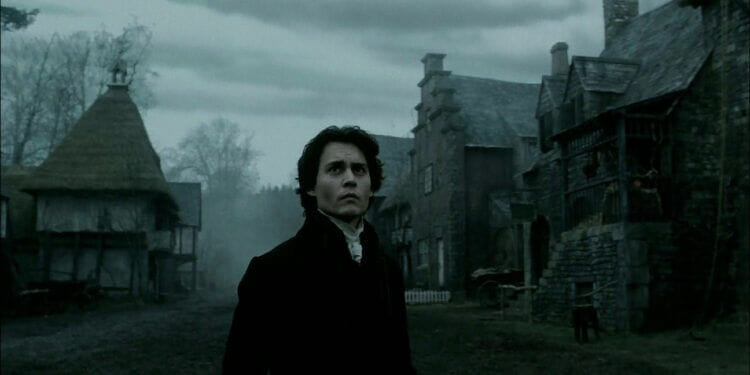 Little did I know that when I was little I was already a huge Tim Burton fan, one of my favorite movies growing up was Pee Wee’s Big Adventure. At six years old there was no way of knowing that I was experiencing one of the earliest movies of someone who was soon to become one of my favorite directors. Four years later he would help turn me into a huge comic book and Batman fanboy with his take on the legendary character.

Tim Burton has been in my life longer that I realized and I think upon that with great joy. Some of his movies are smash hits, some are niche and some are just sadly forgotten to time. Sleepy Hollow is one of those that I feel has been forgotten. When people speak of Burton’s past movies they bring up Beetlejuice, The Nightmare Before Christmas and the like, not many people mention his take on the Headless Horseman story.

To be honest, I had forgotten about this movie until I was scanning through Netflix for something to watch. Sleepy Hollow passed my eye, and I was like, holy crap, need to re-watch this. This is another movie that I learned about at Comic Con in the late 90’s, I believe I still have some t-shirts and posters that they handed out. Released November 17 1999, the movie opened pretty strongly for a winter release at about 30 million opening weekend. Needless to say it is weird this movie is somewhat lost in moviegoers minds.

Obviously this movie is a very loose adaptation of Washinton Irving’s The Legend of Sleepy Hollow. The writers lift the location, the characters, the time period and of course the Horseman from Irving’s short story, but there are many liberties they take with the story. Ichabod Crane in the story is a school teacher, in the movie he is a New York Constable, and that is one of the smaller differences. If I get into more of them I may spoil some of story which I do not want to do. I would suggest giving the original tale a read before seeing the movie, it can be found online for free since it was written in the 1800’s.

Crane is sent from New York to Sleepy Hollow to investigate the latest grizzly murders. What makes these murders so grizzly is the fact that every victim was found headless. His New York bosses want him to test out his new forensic ideology since at the time confessions were obtained with force. being an outsider the town doesn’t really welcome Crane with open arms.

He laughs at their accusations that there is a headless man lopping off the heads of the townsfolk and begins his investigation. The investigation leads him to find out some very spicy facts about the townspeople and the head leaders of the town. If you remember the Disney animated short of Sleepy Hollow you’ll remember how this tale ends, the writers went a different direction with the end. This was some of my complaint with the story, I didn’t enjoy the interpretation the writers had.

I’m not going to lie, this movie has one of the most amazing casts in it. Tim Burton always seems to being actors from his previous movies in, so he must be an awesome person to work with and for. Four main characters are played by Burton’s troupe as are two lesser characters. The actors are as follows; Johnny Depp, Jeffery Jones, Michael Gough, Christopher Walken, Christoper Lee and Lisa Marie. This is just the cast that Burton brought with him; minus Christopher Lee, Lee would join him on future movies.

Now, that’s just the reoccurring cast members, there are more amazing actors in this film. Christina Ricci, Michael Gambon (Dumbledore), Casper Van Dien (Starship Troopers), Richard Griffiths(Uncle Dursley), and Ian McDiarmid(Emperor Palapatine). It is sad that this cast just couldn’t salvage the new take on the classic tale. They acted their hearts out, gave amazing, believable performances, but that didn’t save the ho hum predictable story.

One other surprise that warms my nostalgic cockles is the fact that Ray Park, Darth Maul himself, plays the Horsemen when he is headless. Now he may be cancelled because of Instagram and how society sucks, but I love watching this man’s fighting choreography. It is some of the best in my lifetime and I still can’t get over the Episode One lightsaber battle. His battles are a joy to watch, and are a bit of a gleam of awesome to this movie.

Now, while the story does fail Tim Burton’s movie, I must say this movie carries his look. I can’t even explain Burton’s look, you just KNOW it when you see it. It’s dark, its dismal, it’s steampunkish, it is its own look and I adore it. Sleepy Hollow is perfect for this man’s look and he knows it. In the first scene alone you have a perfect scarecrow with an absolute Burton jack o’ lantern on top.

The rest of the movie follows suit, the small hollow looks great, Crane’s gadgets, the Horseman and the amazing set pieces. The scene that I felt was truly amazing and a nice homage to the Disney animated short was when Burton filmed small snippets of major scenes in the cartoon. The frogs slowly chanting “Ichabod,” the chase of Crane by the Horseman and the final jack o’ lantern throw from the animated version. Even to this day that five minutes or so of Burton’s film filled me with nostalgia, and if you’re a fan of the cartoon just seeing that in live action makes this movie worth it.

Fans of Tim Burton, Johnny Depp or Irving’s story should give this movie a watch. Normal folks may find it boring or slow, there were times when I was sitting there just hoping the Horseman would show up and lop off a few heads. I won’t seek this movie out unless I’m itching for a good, moody look around Halloween.

I would actually suggest to save your first viewing of this title or any newer viewing for the month of October. The movie will hit differently then, than it does in August. I’m sure that I’ll watch it again during October and I’m actually kind of excited. Hopefully I’ll forget what I didn’t like and I’ll see it with new eyes again like I did earlier this month.

Tim Burton gives his unique take on a classic Halloween Tale, but does it stand the test of time like the original story?

Cyberpunk 2077 Will Have Free DLC