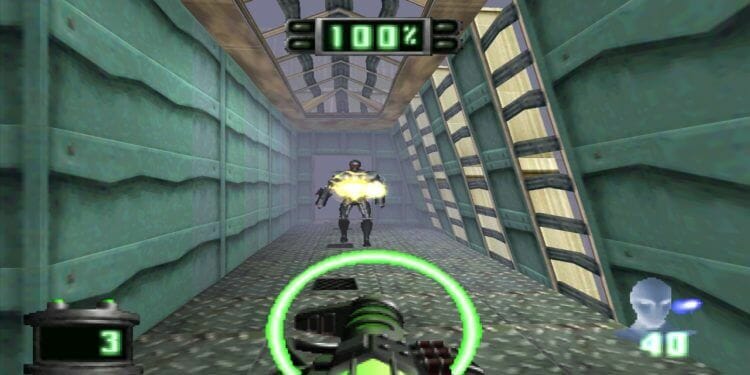 After purchasing Disruptor at a used game store I did some research on the game and was surprised with the fact that it was Insomniac’s first game ever. Yes, the Insomniac that was purchased by Sony a few months back after making one of the best Spider-Man games ever! Their first title was released on the PlayStation November 20 1996, just in time for the holidays.

Since it was 1996 the graphic capabilities weren’t too great, so instead of coding cut-scenes Insomniac decided to film them instead. Yes, the game’s entire story is told through cheesy FMV’s. The first thing that you see once booting the disc is a FMV of President Krieger speaking about the LightStormer Corps that defend democracy around the Galaxy. Like I said, cheesy, but so full of 90’s nostalgia; you’ll get goosebumps.

The acting actually isn’t too bad during the cut-scenes. If you’ve seen Starship Troopers you’ll know exactly what you’ll be getting into with this title. There is some over the top acting in impossible situations with ugly set pieces. However, the dialogue is golden, a lot of testosterone filled catch phrases that never stuck.

The story is a simple one, you play as the commanding officers brother going through training for the LightStormer Corps. Your first few missions are in a VR training where you learn how to handle your weapon and how to use Psyonic Powers. These powers will help you out in a jam during some of the harder missions or when you’re really low on health. You continue to work your way up in the Corps until the President takes a liking to you and helps you gain more Psyonic Powers.

As you do more and more missions for the President, you realize something is wrong. Unbeknownst to you, you’ve been taking out the President’s enemies because you were the best. Now, upon discovering his ploy you must decide what action to take in this violent mess you’ve stirred up.

Back in 1996 we weren’t privy to two control sticks, so FPS games had to use L2 and R2 to strafe. As a current game player this makes it quite difficult to get use to, the left thumbstick moves the gun hand in a 360 degree angle and sometimes you’re falling off the rubble you stand on. The cross button is fire, circle is jump, triangle is interact and square is your Psyonic Powers.

For some reason Insomniac Games wanted to include some platforming in this FPS, and it didn’t go over too well. Training mission three for the main character has platforming and it is difficult with the floaty jump. Had they tightened the distance when you jump it may have been more enjoyable; but getting through level three was a tad tough for me.

For such an old game the graphics are actually pretty well done. There are no in-engine cut-scenes but the actual gameplay is pretty nice. The levels are somewhat bland, but what saves the design is the gunplay, I’m surprised how great the guns feel and how they hit the enemies quite well without a really good aiming reticle.

The enemies could have used a bit more love, but with the low tech capabilities of the PS1 they aren’t bad, just repetitive. The game does have the DOOM type quality, the corridors are tight and claustrophobic, the sound effects are good and the challenge is there. I just wish the enemy design was a tad more varied, once you see one robot, you’ve seen them all.

I enjoyed playing this little piece of history, it is nice to go back once in awhile to see where our current big name developers began. Insomniac’s first game is pretty important, especially now that they’re owned by Sony; kind of cyclical that their first game was on the original PlayStation and now all their games will be on future PlayStation consoles.

I would track Disruptor down if you’re a fan of Insomniac so you can see where they started or if you’re a fan of solid first-person shooters. Yes, the controls will take you a bit to grasp, but once you have them down you’re in for a pretty interesting early PS1 FPS. It won’t take you too long to beat, but during those hours you’ll be taken back to a better time for everyone, the late 90’s; I miss them so.

First Person Shooters have been around for a long time, but are they playable without the 2nd thumbstick being the camera? We find out today with Disruptor!

The Best Money-Making Apps to Play on Your Mobile Device

How To Balance Gaming and Studying