Harry Potter and the Cover Based Shooter 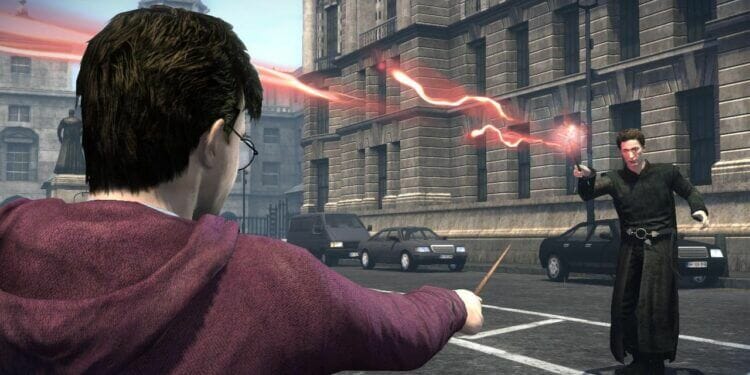 I’ve been a huge Harry Potter fan since I saw the first movie way back in 2001 while I was living my best life in Denver. Somehow I find time every November to re watch all eight movies, and this year was no different, except I played the final two games in the EA library on the Xbox 360. I’ve been playing EA’s take on Harry Potter since the original PlayStation and I’m pretty sure I’ve beaten them all except for the Quidditch one.

Since I was in the mood I decided to play Harry Potter and the Deathly Hallows Part 1 on my aging and struggling Xbox 360. EA Bright Light was the developer on this title, and I have to say they must have been HUGE fans of Gears of War.

This title follows the movie’s story almost perfectly. Harry, Ron and Hermione are out of school and questing for the remaining Horcrux’s. As you do this you encounter many of your favorite characters from the wizarding world. You see the Weasley’s, the Malfoy’s, Luna, Dobby and so on. If you’ve seen this movie, you know the story, you just get to interact with it, in a very shortened way.

The developers added some extra quests that aren’t movie related to extend the play time of the game, which runs a little over five hours with no replayability that I could see. While it was fun to run around London as Harry and battle Death Eaters over and over it really was repetitive and just not what I expected from a Harry Potter game. My favorite games were the ones where you were running around Hogwarts learning spells and finding all the goodies.

Deathly Hallows is NOTHING like those classic games in the series, this is a cover based shooter. Imagine Gears of Hogwarts and that’s the entirety of the game.

The developer attempted to make this game a cover based shooter, unfortunately the controls do not help harry get behind giant rocks and such. To get behind cover you press X when you are near it, but good luck trying to aim you wand behind cover. The mechanics for that just aren’t there, most of the time you cannot see your foe, or even move around to get a good aim. Holding RB brings up the spell wheel, but you’ll mostly use Stupefy.

Right Trigger is shoot your want and Left Trigger is crosshairs, even though a wand really doesn’t have a scope. While in combat you can throw out certain potions to damage enemies or blind them to your presence, when you pick a potion on the D-pad once you hit the Right Trigger that potion will be thrown. Then if you want to throw another one you have to go through the same thing AGAIN. I ended up using very few potions because throwing them was so cumbersome.

If you get lost and there are no enemies around you can cast a bread crumb trail by pressing B, you’ll use that a lot, I never seemed to know where to go. There are stealth missions in this game and when you have to be sneaky you get to use your Invisibility Cloak by pressing Y.

Defending yourself is important in this game, you can run away while pressing A, you can press LB for a Protego spell that blocks incoming attacks. Or you can use Expecto Patronum to fight off Dementors, but casting that spell gets tricky you have to tap LB then hold it to get your Patronum on. A lot of the times you may fail pressing the button correctly and succumb to the Dementors’ Kiss.

The Wizarding World does look pretty nice in this game, while I’m still bummed I don’t get to run around the castle a lot the areas where most of the battles take place do still have that look from the movies. Obviously the main characters have been scanned in and somewhat resemble them in real life. This game will not age well and I suspect the new Harry Potter RPG that is coming out soon will make this game look like Metal Gear Solid.

The Dementors were spooky, and the main characters were recognizable, but the thousands of NPC’s you zap with your wand usually look alike. I felled so many Dark Wizards my trigger finger began to hurt. But when you look at them, they all look alike, so there were a lot of twins and such at Hogsmead!

This game is difficult to recommend even to the biggest Harry Potter fan! I’m a huge fan and I was thankful at how short this game was. The combat wasn’t fun because the controls were not right enough to be a Gears of War in Hogsmead. Had they tweaked the controls more and perhaps just made this and the sequel ONE game it would have been more enjoyable. They sequel to this game which I beat a few days after this one is MUCH better. I wish they would have used the format and mechanics from the sequel in the first one. Then this game would have been a blast!

If you want to play the final games of Potter’s schooling then I suggest just jumping into the sequel. While not a perfect game at all, the controls are better, the variety is better and you finally get back to Hogwarts! If you want to do neither, just watch the movies then, those are always enjoyable!

Harry Potter finally wants to close the chapter on his years at Hogwarts, but does this game do his final year justice?

The Big House Cancelation and the Melee Community’s Indignation #FreeMelee

How Sweden Keeps Blessing us with Amazing Games