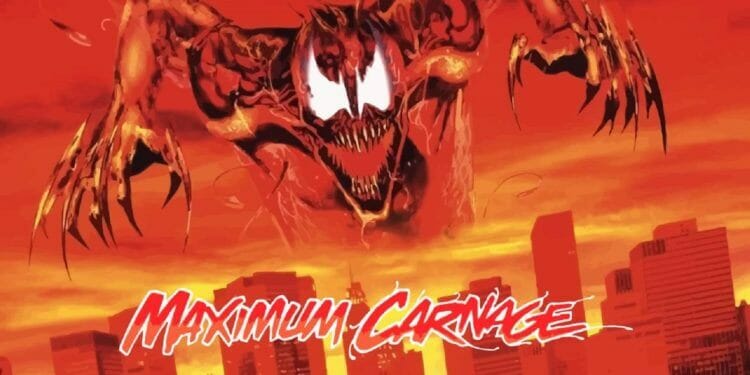 The nineties were a great time to be alive, I have so many fond memories of the decade and my love for comic books was really secured during that time. The first comic book boom was destroying my father’s wallet and filling my bed room with an amazing collection of stories that are now deemed classic. Maximum Carnage was on of those stores, and even though I’ve never been a Marvel fanboy I collected every tie in to the story and I believe I have some of the toys as well. I was a huge fan of Venom and Carnage, mostly Carnage because he was red and red was my favorite color. I didn’t realize until later that he was a truly evil person and I probably shouldn’t have liked him so much. However, his design really drew me to him, much like Harley Quinn, before all her weird makeovers. As previously stated my hobby was thinning my father’s wallet, so I had to chose between games or comic books. I, of course, chose comic books at that time; I was just enamored with them and I honestly hadn’t fired up my SNES is a few years. Jump forward to my 40’s, I finally have the money to get the games I never got, Spider-man & Venom: Maximum Carnage was one of the first of these games that I got. I even got one for the Genesis and one for the SNES. In this review I played mostly the SNES version, even though both games are the EXACT same. I do think the SNES version had better color though, they seemed to pop more.

This story began in the pages Spider-Man Unlimited #1 in 1993, it lasted for fourteen issues and finally reached its conclusion in Spider-Man Unlimited #2. LJN decided to make a game based on the story and release it on the Genesis and the Super Nintendo. After capturing Carnage and thinking the threat is now at bay, Carnage escapes from Ravencroft Asylum because the symbiote mutated into his blood and allows him to recreate the symbiote at will now. As he escapes he frees Shriek as well and they begin a mayhem filled vacation throughout New York City. The threat is so big now that Spider-Man needs help, may heroes come to his aid, Venom, Captain America and more. Ultimately it is up to Spidey to finish the job, will he and you be good enough to defeat Carnage and put him away again? Probably not, this game is frickin HARD!

I will say this, ever since I got my Genesis, SNES and NES clone systems to hook up to my main tv, I realized how difficult older games were. Maximum Carnage however beefs up the difficulty, there are no save points, no passwords to input and only a limited number of continues. The controls are tight though, you won’t be upset because a punch didn’t throw or there was a delay. You’ll be upset because you miss the timing of a punch or a swing. Seeing as there are only 4 buttons on the SNES controller the controls are pretty easy, and since you’ll be playing levels over and over you’ll get good at them very quickly. B is jump, and if you add Y to it you can flying attacking some punk. Y on the ground is also normal attack and A is web powers; using A you can hold it down and make a shield, tap it and lasso up a villain or tap it and press back to pull the goon towards you. And finally X is web swing, which really isn’t used until you hit the climbing sections, which will eat your lives up to no end.

As you play this game you feel like you’re actually playing a comic book, for lack of a better term. I know the graphics aren’t as photo-realistic as Marvel’s Spider-Man, but for the Super Nintendo they were pretty amazing and still hold up pretty well today. The developers digitized actual panels from the comic book and it looks pretty damn good, I got chills seeing these panels again for the first time in years. The actual gameplay graphics is done well too, Spider-Man looks great, but the common enemies you fight all look similar. They kind of do the Double Dragon thing, a different color of the same enemy means a stronger version, and since this is a brawler you need to go after that enemy first. The other heroes and villains that you encounter through the different levels, should you get farther into the game, all look amazing as well. They really took their time with the main characters and must have let the interns make the shovel enemies.

This is a great nostalgia game to have, especially if you’re a nineties kid who loved comics back in the day. I wouldn’t recommend it if you weren’t a comic book fan or get irritated easily by difficult games. This game is hard, but it isn’t unbeatable, you just have to make sure you get through the first level with all of your lives and power, then you have a chance. If you lose any bit of that just restart, it’ll be easier for you. I would suggest just playing Marvel’s Spider-Man if you need to get your web-slinging fix. It is much more accessible to modern day gamers and it’s just easier to find and play. If you want to play Maximum Carnage you have to have a Genesis or a Super Nintendo which not many gamers have nowadays. Stick with Insomniac’s masterpiece and if you have an itch for some 16-bit Peter Parker then give this title a look; it will amaze you how far we have come in just a small amount of time.

Are We In A New Survival Horror Renaissance?