Retro Review: Stubbs The Zombie In Rebel Without A Pulse 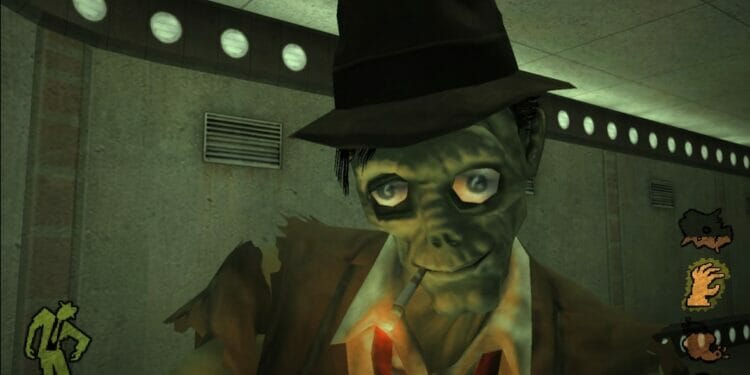 Stubbs the Zombie is one of those games that I had to do some heavy hunting for in ’06 and’07. I went to my EB Games at the mall and was upset to get the “last one in the store.” To my odd good fortune, the game did not load, so I took it back and they had a brand new one sent out to me, not one that had been grubbed up by Cheeto covered hands. Had I known the game was to skyrocket so much in price I never would have played it 12 years ago!

Stubbs was released on October 18 2005 to middle of the road reviews on both PC and the OG Xbox. It plays as a third-person action game, was developed by Wideload Games and published by Aspyr Media. It just so happened that the Xbox version did fairly well and a sequel was planned, sadly with the closure of Wideload Games it looks like Stubbs only gets one outing as a Zombie.

Our story begins way back in 1933 when traveling salesman, Edward “Stubbs” Stubblefield, finds love with a girl named Maggie Monday. Unfortunately, Maggie’s father doesn’t approve and kills Stubbs when get finds her with his daughter. The father throws Stubbs’ body in a ditch where it lays there waiting. Then in 1959, Andrew Monday (Maggie’s son) has a grand opening ceremony for the city he has just build over Stubb’s grave, Punchbowl, Pennsylvania. Stubbs, not taking any of this crap, wakes as a zombie and decides to get his revenge, even if it is twenty-six years later. His revenge consists of destroying the police station, turning citizens into zombies, and ruining the water treatment plant.

With any game being this old I always assume it is going to look terrible, especially since it is coming from a system that originally used A/V Cables. To my surprise my Pound HDMI cable for the OG Xbox made this game look quite amazing. It doesn’t even compare to what current-gen game I’m playing, but time has been very kind to Stubbs.

Stubbs’ design is a very recognizable one, which is good since you’re going to try to turn as many townsfolk into zombies. You stand out very well in your brown suit and fedora, very 1930’s. The areas of Punchbowl look great and very 1950’s which I love. I use to work in a 50’s diner in the early 2000’s and I always loved the way everything looked back then. The neon, the stainless steel, the fashion, and the cars. Wideload Games really pulled that into the game and gave it a somewhat futuristic look ala Fallout 3.

This is it, your chance to become a zombie and wreak the havoc that you usually have to contain in the games. Now you don’t start off with all of these upgrades at the get-go, all you begin with is “Zombie Fart” which basically acts as a flashbang, you press B to let out that precious gas. Once you stun your foes you can melee attack them with Right Trigger and X, after you knock off some damage you can grab them and eat their brains with Y. Oddly enough Stubbs can jump, which means there is a little bit of platforming, but it isn’t too difficult to get through.

To gain more special zombie powers you have to proceed through levels and meet up with robots that teach you new ways to torment your foes. You can throw your stomach out as a bomb, roll your head like a bowling ball and use your hand to scout out ahead. These break up the monotony of some of the gameplay and add a nice variety to the game. Stubbs is also the only zombie I know that can drive. In some of the levels you can commandeer a vehicle and run over people instead of just eating their brains. However, eating their brains is to your advantage, the more townspeople that you convert will make the level easier. They basically become your human shields as you accomplish your mission of revenge. You can push them with Y to get them moving toward an enemy you want them to dispatch or whistle so they follow you.

Now, I don’t usually gush about a game’s music too much. I enjoy it and go with it, but Stubbs the Zombie has one of the best soundtracks in gaming. I actually found a copy of the soundtrack because I loved the cover songs so much. Once again the 50’s diner life in me had me enamored with these new takes on old classics. I would list the artists and songs they cover, but you can look at the backside of the soundtrack case and be amazed they got all these artists in the game. One of my favorite covers on the soundtrack is The Flaming Lips version of If I Only Had A Brain, followed closely by Death Cab For Cutie’s Earth Angel. This is truly one of the best video game soundtracks ever put together.

This is a great game that is sadly trapped on the OG Xbox and on PC. It is not on STEAM either, you will have to find a physical copy or some way to get it onto your PC. I am not promoting anything illegal, but this game is definitely worth playing. Back in the day, I believe I paid the standard 49.99, which was worth the price of admission. Paying any more than that just because the game is now “rare” isn’t really worth it unless you’re a collector.  The game is short, clocks in at around eight hours, and had no replay value for me.

Zombie enthusiasts and hardcore video game collectors are the ones who should be dishing out the huge amounts for this game. I wish more people could play it, I wish it was on the Xbox Marketplace but I believe all the music copyrights ended so you can’t download it there either. Stubbs is sadly lost in the ether and we need a way to bring him back on the cheap so people can experience this awesome game!

Stubbs The Zombie In Rebel Without A Pulse

Two gaming generations ago there was still originality in games. Stubbs the Zombie was one of the most original games that I have EVER played!

Can I Learn Ethical Hacking Online