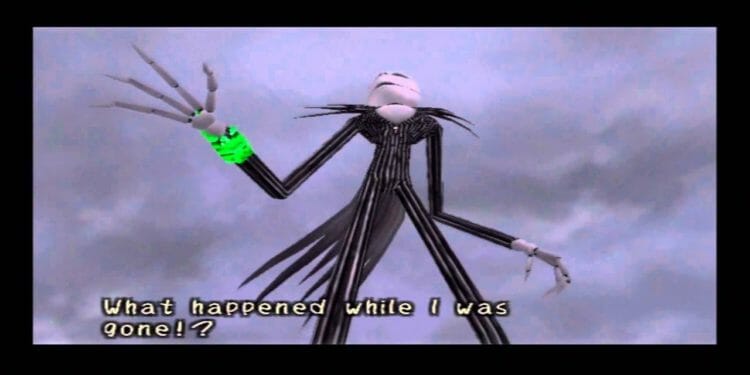 Happy Friday the 13th in December! Which means we are celebrating Halloween on Christmas with a look at Tim Burton’s The Nightmare Before Christmas Oogie’s Revenge for the PlayStation 2 and Xbox. The title, developed by Capcom was released on October 21 2004 and serves as a sequel to the 1993 classic film.

I decided to play on the Xbox, and was bummed that this title isn’t one of the backwards compatible titles for the Xbox 360.

The game begins with Jack giving a rousing speech about how great the last Halloween was that they celebrated. He then goes to Dr. Finkelstein because he still feels that Halloween wasn’t good enough and that next year needs to be bigger. The Doctor gives him the Soul Robber, which will act as your weapon, and Jack takes off on an adventure.

While he is away Lock, Shock and Barrel revive Oogie Boogie and Oogie brainwashes the good doctor to create minions for him. These minions occupy Halloween Town and greet Jack upon his arrival. Jack frees his town and finds that Oogie has kidnapped five of the Holiday World Leaders. Oogie is attempting to kidnap the Christmas Town Leader so that he can become the “Seven-Holidays King.” It is up to Jack to stop him and free the leaders.

Seeing as this is a canon sequel of the 1993 classic, it is kind of sad that it doesn’t add anything new to mythos. I understand that the developers maybe didn’t want to play too deep in Tim Burton’s world but the stories between the two are so similar you could almost just give this game a pass.

Remember how everyone said The Force Awakens is just a reskin of A New Hope? This is very similar, except in video game for and not as blatant.

So basically this game is kid friendly God of War, Jack somehow becomes a martial arts master with his Soul Robber and defeats enemies with the greatest of ease. You whip enemies into submission with the Soul Robber using X as light attack and Y as heavy attack.

Thankfully with the finicky camera they allow you to dodge with the B button. I wish that the combat was a detailed and responsive as God of War and Devil May Cry, but it isn’t and it feels very sluggish to me. A point that is very surprising seeing that Capcom developed the game!

Another mechanic this game stole from Devil May Cry was the level system. As you’re swinging around the Soul Robber you make combos which are judged at the end of the level. How well you do designates how many pumpkins you get, which you can use in the Witch’s Store in Halloween Town.

What really annoyed me while running around Halloween Town and saving everyone was the fact that every time I pressed Y to do heavy attack Jack yelled “Soul Robber!” This never ends, so you simply must go mad as you attack countless foes with your heavy attack. And if that wasn’t bad enough, every time enemies come on screen This is Halloween plays until you begin to hate the catchy tune.

I’m all for certain repetitions to save money in development costs, but this was almost as bad as Chinese Water Torture in some levels.

I did enjoy some of the boss battles, even though I was particularly bad at them. I would whup on the boss with my Soul Robber, and then once I collected a certain number of musical notes I could enter into a quick time mini game that I failed.

Now I failed them due to the fact I’m using a 3rd party wireless controller for my OG Xbox and just kept messing up where the face buttons were.

The controller is significantly smaller than all my other controllers and I kept getting the song wrong to inflict more damage on the boss. Thankfully I was proficient in the Soul Robber and I still downed the bosses. I did think that this mechanic in the boss fights was different and very enjoyable.

This game just didn’t do it for me, I’m a huge Tim Burton fan especially of his Batman movies and I just couldn’t get into this game. The look the feel of it is perfect, but the stagnate combat and repetitive nature of the game just killed it for me. I’m use to playing faced paced hack and slashes from this generation that are so polished, it seems a shame Capcom didn’t fine tune this title like their Devil May Cry Trilogy.

If you’re looking for a hack and slash from this era I would go with the tried and true. If you’re a HUGE Nightmare Before Christmas fan then pick this up, it’ll be worth your time just be prepared to hear Soul Robber a billion times!

The sequel to the cult classic Nightmare Before Christmas oddly enough came out on the Xbox and PlayStation 2, but is it a worth successor?

Game On: The Representation Issue