Gather the 3 Amigos plus one! 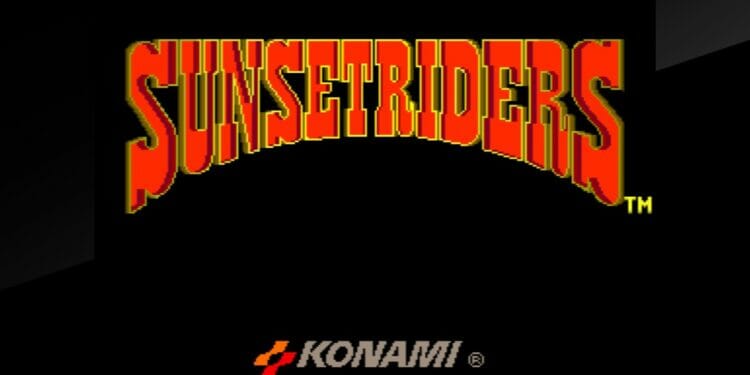 I love the Wild West, my father was also super into Western Americana and when I was younger I got to see all the historical sights. I visited Lincoln County where Billy the Kid had his wars, I’ve been to Tombstone to walk where Wyatt Earp did and I’ve been to the Custer Battlefield where many Calvary men fell. So when my parents chose video games, they went with what they knew. Sunset Riders sits in my SNES collection and now it sits in my Switch collection.

At first I was worried that my nostalgia for this title would be ruined by playing it again as an adult. I was wrong, and I’m grateful for that. I remember turning on my SNES and shooting the bad guys over and over. I felt like a kid again after downloading the game onto my Switch Lite and I’m very happy with the eight dollars and change I spent.

Now, seeing that this is a port of an arcade shooter there really isn’t too much story to delve into. You can play as one of four bounty hunters who are just looking to make a buck while making the world safer. Each character offers you a different weapon. Steve and Billy use a pistol which can be upgraded through powerups you find in the levels. Bob and Cormano use a shotgun, which is my favorite weapon because it has the most spread of all the weapons. It’s easier to hit multiple targets when you’re trying to platform a train level.

To get the powerups you can go into a saloon and get a drink or a prostitute. Or you can shoot bags in the level or people carrying the bags. These powerups are simple but man do they help. The Gold Badge gives you turbo shooting so that you just have to hold down the fire button. The Silver Badge duel welds your guns which is also useful because you can cover more of the screen with bullets. Problem is, when you die, you lose those powerups which really sucks on a boss. Having a peashooter at the end of the level makes your life hard.

Seeing as this is a cross being a SHUMP and a platformer the controls are pretty easy to master. The game is nice enough to give you a menu before you play, but let’s go over it anyway. A is jump, down is crouch, down and B is slide, ZR is fire weapon, L is credits so you can keep up your continues and R is continue. Very simple and very easy to master.

Back in the day this game was a quarter cruncher in the arcades so remember that it will be difficult, you will die a lot. I died a lot because I’m not use to using the D-pad anymore. I’m all about joysticks, but to be better at the game you have to master the D-pad.

This title came out in 1991 so there is no way it is going to compete with recent Wild West game like Gun, Call of Juarez and Red Dead Redemption. What it lacks for in the graphics department though, it makes up for in style. Thankfully the 16-bit era has aged well and Sunset Riders is testament to this. The main character and boss sprites an amazing and unique. You never lose you character on the screen and you always know who the big boss is.

That being said, the common characters just change color or brandish a different weapon. So the grunts all look alike, however, the level variation is pretty great. You play in a city, in a saloon, on some trains, you have some interesting platforming challenges to beat. Also, there are special levels where you shoot as many baddies as you can to get your score up. The variety, humor and overall feel of this game made it age very well.

Sunset Riders is 7.99 plus tax in the PlayStation Store and in Nintendo’s eShop. I grabbed my copy on my Switch Lite so I could play immediatly. I’m sure I’ll grab it on the PS4 as well to boost my trophies. I will admit this game is very short, I beat my first run through with Steve in about forty minutes. However there are quite a few additions that will keep you playing for awhile. First off they included the 2-player and 4-player Japanese version and the 2-player and 4-player American versions. The Japanese version don’t differ much from the American versions, the text telling you what to do in certain parts of the game is in Japanese.

There is also a Hi Score mode where you try to get the highest score without any saves or continues. This is just a bragging rights part of the game and I did not do too well. My skills still haven’t come back from my youth. Caravan Mode is the final mode in the game. This is where you attempt to make high scores within 5 minutes with no saves. This also didn’t interest me, I don’t like failing over and over, yet I’ve beaten all the Souls games but the last one.

My nostalgia made me buy this title because of the amazing memories that are connected to it. Had I not been gifted it as a little kid I may have passed on the title due to the length of the game. It would be more fun if I had friends to couch co-op this game with, but seeing as we are still on lockdown, no one is coming over. It would have been cool to have online co-op and I don’t know why they didn’t do that, but oh well. I should be happy I can play Sunset Riders on the go now whenever I want.

If you’re a fan of old arcade games, the SNES, couch co-op games or the Wild West then I would tell you to buy this game. The price of admission is pretty good and even though it is short you can play it over and over to best your score. Highly recommended!

Four heroes are riding back onto your consoles from the Super Nintendo era. Did they come back in style or are they all dried out?