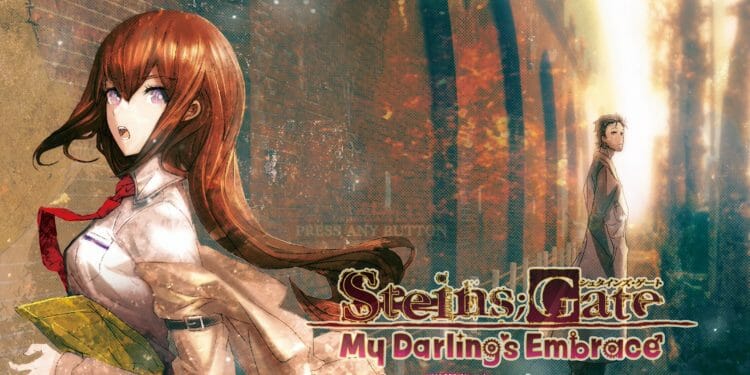 Another visual novel has landed its way onto the Nintendo Switch, and since this is the perfect portable platform for that type of game I’m excited to go another round with the Steins;Gate series. I did get to review the other version that dropped on the Switch, Steins;Gate 0 and had an enjoyable time with that game; even if I didn’t know what was really going on since I hadn’t played the PS3 or Vita installment.

I will say that having a greater knowledge of this world and the prior games helps a lot with the understanding. The Anime will help, the two games prior and I believe there is also a cartoon hanging around out there to clear up the confusion. The Steins;Gate games are not easy to follow if you’ve not played prior installments. You can’t drop in like the new Assassin’s Creed games, just a fair warning.

Once again you play as Okabe Rintaro, also known as Okarin, but something is a bit off with our lead character this time around. Instead of being normal Okarin he continues to demand that he be called “Mad Scientist Houiuin Kyouma.” No longer is Okarin interested in going back in time to save people, he now is obsessed with creating weird inventions in his lab, with his sudden new lab members.

As you sit there trying to figure out where these new faces are your old friends greet you as if nothing has happened. This means that Okarin is the only one who remembers what he has done and how he has done it. It takes him a minute to realize what he created in the Future Gadget Laboratory. Once the cloud finally fades away from his mind he realizes that he has created the “D-mail,” which is sent through his Phone Wave.

This new email has altered the past so that you now have new lab members, odd thing is only Okarin remembers the changes. No one else does, to them everything is the same as it ever was.

This Phone Wave sends the “D-Mail” into the past to any person that you’d like to send it to. Let’s say you wanted to tell yourself the winning lotto numbers and pull a Biff Tannen and send yourself some winning lottery numbers and the like. That would change the past and you’d end up in a future where you’re rich and didn’t have to do anything.

While this may seem like a good idea at the time, it could cause some serious repercussions that you had no idea would come to pass. For instance new people could show up in your life that could be a drain on your new found resources. This actually happens to Okarin; now that he has all these new recruits in his lab, they are a drain on the power as they try to invent new gadgets for him. Seeing as he didn’t send his past self financial information he now needs to figure out how he can create more capital for himself.

This game also plays as a dating sim, it isn’t as dark as Steins; Gate 0 and has more of a jovial feel to it. You get to try to woo your lab workers over and over again. It is a fun little concept, but I already suck at dating in real life, why would I want to continue my failures on my Switch? My Switch looks up to me, can’t let it down, right?

The look and feel of the game matches Steins;Gate 0 which is nice for continuity. You still have to read the whole thing because it is in Japanese, but I always thought that it gives games like this character. I fired up Yakuza on the PS1 and it almost bothered me that it was in English, unlike the newer versions of the game. I still enjoyed it, but I wanted the authenticity of the language to immerse me more.

This game is a fun, but different jaunt through the Steins;Gate universe. It isn’t as depressing and morose as the prior game, unless you’re bad at dating, then you’ll just be depressed at yourself. I enjoyed playing this game and seeing what other timelines in the universe had to offer. The game does have some bang for it’s buck seeing as you can pick this up for thirty bucks and play for quite a long time on that dime. If visual novels are your thing, grab this title, you won’t regret it; and if you do just send your past self an email.

Made the Phone Wave, goal is to “destroy the hierarchy of out society and bring chaos to the world.”

Okarin is back for another time changing adventure. This time, however, he's in the dating mood.