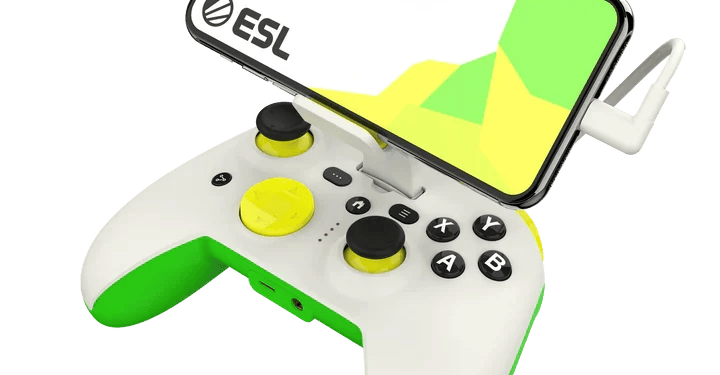 What exactly is new about this controller and can it actually outdo the previous near perfect mobile controller, or is it a new verse same as the first and is it worth the $70 price tag?

The RR1852 PWR Plus was a very basic and plain looking controller that didn’t win me over at first glance, The ESL rectifies that by having a far more broad and bold look, the green and white mixed with small touches of yellow really catches the eyes and helps make the controller look unique and distinct. It also helps that the ESL looks like a modern Xbox controller, I mentioned that the RR1852’s D-pad was similar to the Xbox, now the ESL looks sports a design that makes the device feel like it could be a 3rd party Xbox controller.

The Clip that holds the phone has been vastly approved upon, now instead of being screwed on the top of the controller the clip clicks into the front, this puts the phone in a better position and puts the weight in the front rather than on top. The clip is also adjustable this time and doesn’t feel stiff, repositioning the phone is smooth and effortless, making setup a breeze and cable management is far less bothersome than the RR1852.

I praised the RR1852 for it’s low power consumption and lightning cable pass through, and I’m happy to say that the same thing applies to the ESL, there isn’t a lot I can say that wouldn’t be a repeat of what I mentioned in my last review. But unlike the last model, the ESL now has the four LEDs showing on the controller rather hiding it, it shows which player is controller 1,2,3 and 4.

The controller also now supports 3.5mm headsets next to the lightning port, now players who don’t use wireless earbuds have more options with their headsets and it leaves the charging port opened up and free.

One of the biggest changes for the ESL is the update to the sharing functionality, the RR1852 used the option button that also doubled as the share button, users would have to double press it to take a screenshot and holding the button to activate screen recording. Rotor Riot has moved that function away from the option button and simply made it a separate button, it’s easily located near the D-pad and can be easily reached without the need for the user to fumbling around trying to remember where it’s located, and thankfully it’s also easily avoidable so accidental screenshots don’t occur.

Just like with the RR1852 users can chose to share to Facebook, Instagram or YouTube. There’s still no option to use Twitch or other services, and users still can’t choose to pick what they want to use when recording. The iPhone allows users to pick multiple options when screen recording, such as Discord, Facebook Gaming, Twitch and many other services; so it’s still disappointing that users are only stuck with built in options when they could simply pull down the menu and manually pick their favorite service.

I would like to see the next model support more options and maybe even allow users to pick services that they already have on their device.

The home button still functions like the previous model, I used it with Amazon Luna and it does open a quick menu to exit games, so at least one service makes good use of it. Otherwise everything I said about it in my previous review still stands. 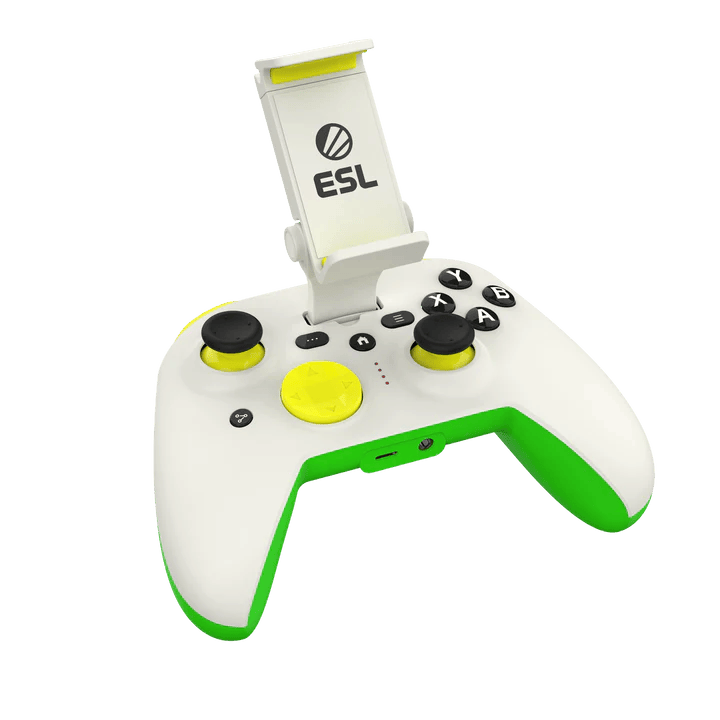 The app that complements the ESL is the same as before, in fact, I’m honestly just going to repeat what I said last year.

The Ludu Mapp app functions as the home of sorts for gamers, it provides the best and easiest way to see what games support controllers, it also offers movies, walk through guides, xCloud, PS Remote Play set up and curated games that could help players find their next favorite game. It also functions as a way to update the controller’s software whenever they become available.

The app looks like a store, but the games aren’t downloaded through the app itself, users while be sent to the App store and only there can the game be downloaded on the device. Thankfully the app is updated in real time, so paid game prices are updated to match what’s in the digital store.

As for the controller itself, the app has a controller test option where users can get a visual glimpse at the controller’s layout and test which button isn’t responding and see the sensitivity of the thumbsticks and triggers.

Unlike in previous reviews I’m not judging the ESL to other controllers outside of the original manufacturer, I actually get to compare it to a predecessor and have a better understanding of what has changed and what could be better, so how does the ESL stack up against the RR1852?

Brilliantly! The ESL is such a huge improvement when it comes to the feel of the controller that I actually want to knock points off of my review for the RR1852, and that’s something to be excited for, I actually don’t want my RR1852 anymore. It feels like a controller that I wouldn’t bother with and wouldn’t recommend if I used the ESL first, the improvements to the shape and weight makes the RR1852 feel a bargain bin controller and I absolutely love that.

Unlike the RR1852, which I said could feel cheap without the phone attached, the ESL feels right with or without a phone attached to it and the new clip is a great improvement over the previous version. The clip on the ESL still feels sturdy and the thumbsticks feel more in tuned with the Xbox controller than the iffy feel of the RR1852.

The input buttons are also more like the Xbox thanks to the shape of the controller, the D-pad doesn’t feel that much different than the RR1852 but i did notice that it has a lower profile that mimics the newer Xbox controllers. In fact, the share and option buttons are also lower than before, this makes the buttons feel like they’re in the controller and it feels strange at first.

I didn’t like that the buttons were designed to be so flat, I’m used to them sticking out and being a part of the button schemes, but the ESL does make up for this by having the buttons feel very different from the controller, you’ll notice as you slide your fingers across the controller that the buttons are  made of a completely different material and the design helps keep the share button from being accidentally push. I quickly came to admire this design choice and understood it’s purpose.

Input lag, like the last model, was nonexistent and the controller still works as flawlessly as before.  I played BloodRayne 2 Terminal Cut, Asphalt 8+ Detonation racing and other fast paced games to test the controller’s response time and simply functioned just as smooth as the RR1852 did. I called the RR1852 PWR Plus one of the best mobile controllers I’ve used, not just for its familiarity but for its simple plug in and play functionality, and I still stand by that. But the RiotPWR ESL Gaming Controller is such an overall improvement that I would actually recommend skipping the RR1852 and picking the new model instead, Riot Power has made all the right improvements with the ESL and I can’t think of anything that could be improved with the exception of allowing more screen recording and streaming options.

The ESL has managed to outdo the RR1852 PWR Plus as the most user friendly mobile controller I’ve ever used, I can honestly say that it is the best mobile controller I’ve seen on the market, screen shooting and recording is still quick and even easier than before and with the added audio jack, gives users even more options.

But, and this is something I wanted to save for the end, I can’t say that the controller is worth $70. It does nearly everything right, but an Xbox controller can cost just as much (depending on the style of the controller) or even less and those have the added benefit of being compatible with an Xbox, mobile device and a PC at that price range.

If you’re looking for a controller purely for your iOS device and you want easy sharing functionality then yes, I would recommend giving the ESL a go, the plug and play function is still something that gives it an edge over using an Xbox controller and it’s built specifically for iOS. But if the price tag makes you wince, I would ask how often would you be using the controller on you phone? If your answer isn’t, ‘often’ or ‘a lot’; then I would still recommend the RR1852, but mobile content creators will surely find the ESL as their go to controller.

This review is based on a product provided by RiotPWR

The ESL has managed to outdo the RR1852 PWR Plus as the most user friendly mobile controller I’ve ever used, I can honestly say that it is the best mobile controller I've seen on the market, screen shooting and recording is still quick and even easier than before and with the added audio jack, gives users even more options.