StellarHub is a space station building simulator that allows players to study the smallest details of crew statistics. The game isn’t simply about expanding your station and avoiding disasters; it’s about giving the right job to a crew member and managing their stress, depression, and well-being.

On the surface level, it’s your average colony building simulator. You start with a simple hub and expand the station by building and attaching up to 30 different modules. Resources like energy, oxygen, money, and food must be carefully managed. Like other civilization sim games, disasters can happen. Meteors can strike your space station and pirates can attack. However, the disasters are easily mitigated by leveling up defense systems.

When you want to do something like increase station defenses, you select the research topic from an enormous skill tree. The tree has 12 different branches, ranging from tourism to astrofarming. It takes a substantial amount of time to research and unlock all of the available research topics, but most of them are necessary for furthering the development of your colony. Tourism is badly needed in order to produce income, and astrofarming increases food quality and yield. The research tree is a little overwhelming, but the game gets most complex when it comes to personnel management.

The characters in StellarHub are elaborate and oftentimes over-demanding. Each crew member has a complete profile that includes statistics such as health, hunger, oxygen level, morale, strength, and more. In addition to these characteristics, the crew members can have up to 22 different professional skills. These include things like ore mining, first aid, and cleaning. Most characters will only have one or two of these skills, but they can be improved upon or taught new skills through employment. If you assign someone as a janitor and they are not skilled in cleaning, they will get stressed, hurt themselves on the job, and often leave work early. If one of your crew members becomes exceptionally skilled at a job, he or she will demand frequent pay raises.

The most unpredictable part of StellarHub is how these complex crew members behave and interact with one another. Employees get bored. The game allows for creation of entertainment areas, but these don’t always help. Crew members may have grumpy days. They can get sick and infect the people they interact with. Sometimes, the staff member assigned to the medbay won’t actually pay attention to his clients. Perhaps this is meant to be realistic, but it can be discouraging. Waiting for replacement staff members to arrive from outside the station can take a while. Complete societal breakdown can happen before these disgruntled employees are replaced.

You start the game with a handful of crew members. In order to hire more, you must build a module that allows new workers to come to the space station seeking employment. Depending on the gameplay scenario you choose, these new employees are generally varied when it comes to personality traits and skills. If a batch of lazy, unskilled workers arrive and you decide not to take a chance on them, you have to wait quite a while for the next bunch. It’s realistic, but discouraging.

The learning curve is steep. With so many different building options available and a complex worker system, it’s recommended that you complete two tutorials when playing for the first time. Be warned: the tutorials are long, and they can be wordy. Even when sped up to the maximum speed, I felt like I needed to invest a significant amount of time into the tutorials. This would have been okay if I could save the game and quit partway through, but the save icon wasn’t available at any point of the tutorials. This is especially bad while the game is still working on fixing all of the bugs. I ran out of oxygen during my first tutorial and had to start from scratch. During my second tutorial, the game crashed and I had to begin again. Offering a save option during tutorials could prevent a lot of frustration.

Deep down, StellarHub has some interesting ideas about colony building and worker behavior. It’s priced right for the features available ($8.99 on Steam). However, it follows the standard colony-building pattern and offers little more than character complexity. As an indie game, it’s a good start. The development team is in constant communication with players on Steam, regularly updating and improving the game. Nevertheless, it’s lacking a unique gameplay feature or mechanic to make it stand out from the competition. 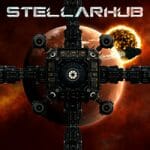