Three returning fighters and a new character are coming your way Today, Capcom had presented a live stream on their Twitch and YouTube channels for their highly-anticipated Summer Update for Street Fighter V: Champion Edition. Let’s break down what’s been revealed at today’s showing, as well as when the new update releases.

We’ll be breaking down each piece of the reveal. As of now, the characters revealed this season are Dan, Rose, Oro, and Akira (from Rival Schools, another Capcom IP). A release roadmap was also revealed, and we’ll take a look into that, too.

In today’s live stream, Street Fighter 5 Director Takayuki Nakayama and producer Shuhei Matsumoto had revealed that Dan Hibiki, a popular character from the Street Fighter Alpha games, will be the first character to be released in Season 5. In addition, some early development footage of Dan was also released (video credit: PlayStation on YouTube), which you can watch below.

.After the Dan reveal, and an advertisement for the upcoming new season of Street Fighter League, is another character reveal, done by AEW wrestler Kenny Omega. From his stream spot, he reveals that Rose is the next DLC character, and the stream pans back to Nakayama and Matsumoto, who explain part of why they chose her.

This would follow suit for the next two announced characters, being Oro (from Street Fighter III), and Akira Kazama (from Rival Schools). In addition to the reveals for these characters, the developers released a content roadmap, which can be seen below. 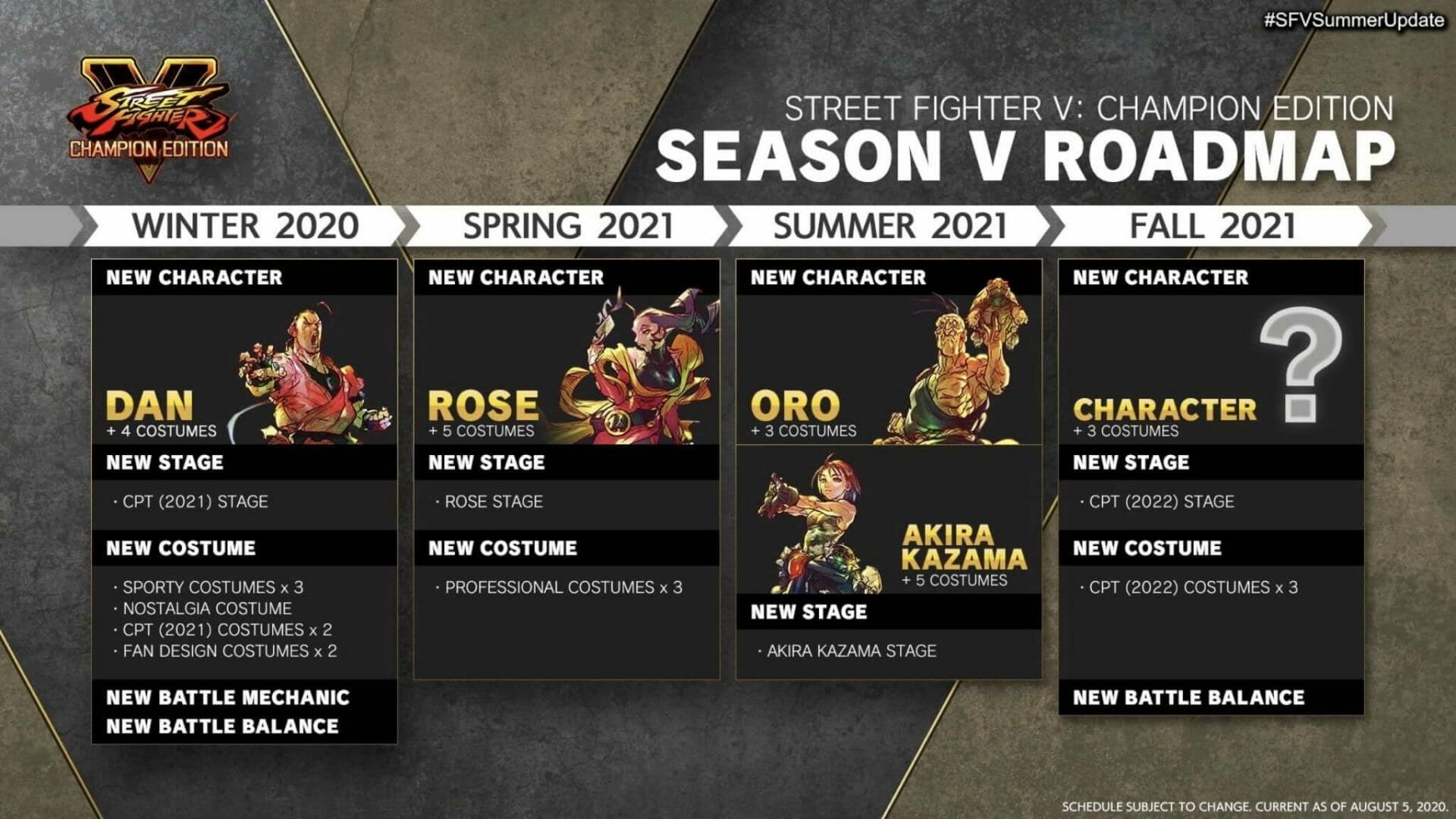 From the roadmap shown, it details the release order of the Season 5 DLC, including release windows and balance patches. Dan looks to be releasing in Winter 2020 (around November-December). This roadmap goes up until Fall 2021, with the release of the final DLC character for Season 5 (currently unannounced, as of now).

Street Fighter V is available now on PlayStation 4 and Steam. As of the time of writing, there’s currently a sale for purchasing Street Fighter V, with the base game being up to 60% off, and Champion Edition (the latest version) being up to 25% off the normal price.

What do you think of the Street Fighter V Summer Update? Are you looking forward to the content announced? Is there a character that you want to be added to the game? Let us know your thoughts in the comments section below.

If you like new fighting game character reveals, be sure to read our article about Guilty Gear Strive’s Leo Whitefang and Nagoriyuki here.