by Trevor Kincaid
in Other
Reading Time: 3 mins read
1 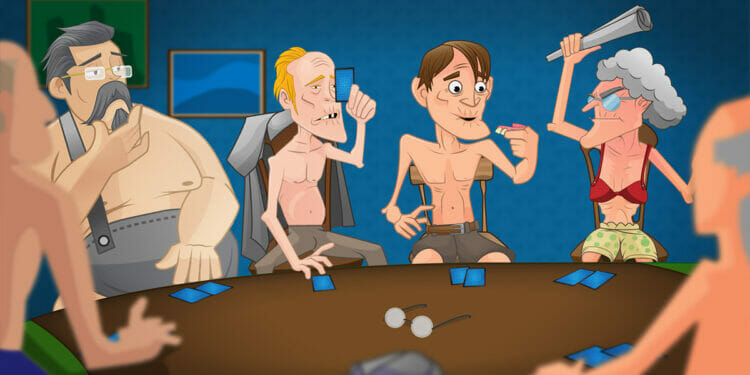 Being one of the most mature, naughty, and fascinating type of poker, strip poker is probably the most well-known card game outside the official casino halls. Anyone, especially youth, who desire to feel something bigger than just playing cards, enjoy this risky and sexy game at both home parties and big championships. If you want to have fun and get cranked up to a notch, then keep reading, and find out some of the most interesting facts about strip poker!

So, How’s It Started?

Ultimately, the idea of ​​playing poker and betting on your clothes instead of chips or cash is as old as the game itself. Being born on the banks of the Mississippi River, in New Orleans, it is generally accepted that strip poker roots back to the 19th century. Considered to gain its popularity first in the “vulgar” and ill-mannered places of that time, like houses with red doors (if you know what we mean), strip poker soon had gone much far beyond the cathouses.

Soon after its appearance, strip poker showed up in a range of movies during the 30s and 40s, making this game a cult one. For instance, strip poker appeared in the controversial movie called The Road to Ruin (1934) – the film depicted a hard fate of a young schoolgirl whose life was ruined by sex and drugs. Being both spicy and provocative, the movie somehow earned almost $3 million. Maybe it was the strip poker’s credit?

As the years have passed, strip poker became solidly entrenched in pop culture. Not too long ago, strip poker was highlighted in Lady Gaga’s music video “Poker Face” which was released on December 19, 2009.

What Are The Ground Rules

As some of you may have already guessed the chips in strip poker are clothes. If anyone loses a hand, he must take off his clothes, so, it is better to play wise unless you want to sit completely naked, or in your underwear (depending on how you agreed with the other players). To keep everything fair, it is common for every participant to begin the game with the same amount of clothing.

The rules suggest that there is no big difference in what kind of poker you choose to play because strip poker is not only about naughtiness, but also about negotiating and fantasizing. However, strip poker uses mostly 2 popular variants of poker such as:

Before playing, of course, we suggest you to play in Texas Hold’Em and Draw Poker for free or for real money to practice your gambling skills and beat everyone during the real game. Of course, you may not exercise if you are a naughty one.

Avoid Stud
Except for the aforementioned poker options which are suitable to play in strip poker, Stud remains to be played as well. However, we don’t recommend you to play this one, because there are too many betting rounds in a Stud game. This breaks the cheerful and warm dynamic of a game of Strip Poker a bit. If the players decide in addition to paying until the showdown, those will find themselves without their clothes after a few hands… But the longer it is, the better it is.

Real Clothes That Matter
The major problem with this game is what counts as clothing. Are a pair of socks divisible, or do they count as one piece? The answer is simple – “an item of clothing” is something that must be worn by the player, which implies, for instance, that a shoe corresponds to this description, but a bandage or a bandage does not. Other exceptions are: glasses, brooches, earrings, rings, bracelets (WSOP or not, doesn’t matter), and other wigs.

To Conclude
If you are a brave one, go ahead and try out playing in strip poker, but if you are not sure if you want to play this game, relax in the safe virtual casinos and win real money by playing casino games without undressing and remaining completely anonymous.

Also remember, that it is vital to maintain an atmosphere of respect and make sure that the idea behind the game is shared by everyone. Literally, do not force anyone’s hand. Additionally, you should avoid making remarks made in the form of humor that could directly or indirectly attack the body of others.

What online games may you play at the party?

[…] variations available for a play. If you want your evening with friend to be even more piquant, try out a Strip poker – a card game which involves undressing. Believe us, you won’t be […]