I don’t think anyone saw Tetris 99 on the horizon. Even as Battle Royales popped up like slight mutations of the same weedy plant, it didn’t seem likely. However, the mental gymnastics you’d need to have predicted Super Mario Bros 35 would win a dozen gold medals. Yet here we are, and now the floodgates are open for a battle royale of virtually any classic game ever made. 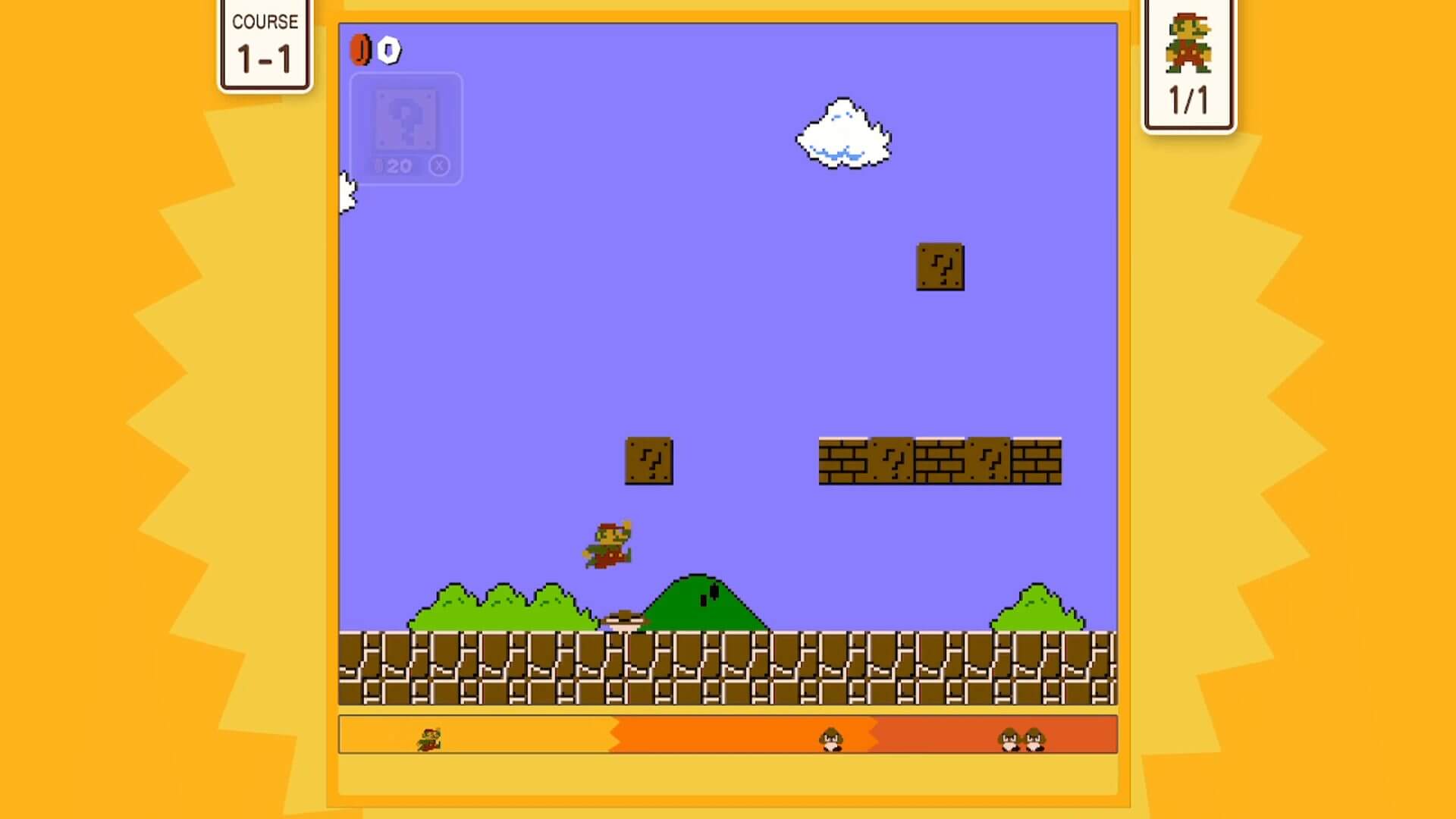 The first thing you’ll encounter in Super Mario Bros 35 is that it has virtually no instruction for how to play. The first Mario game may be one of the most intuitive in existence, but there’s a ton of functionality stacked on top of that experience. If you just play as you would a normal Mario game, you may find success as I did, but knowing the details makes the whole experience more fun.

The first thing you do before joining a match is to pick a level. Starting out, only world 1-1 is available and you will play it more than you ever wanted to in your life. However, as you progress, more levels will become available to choose from. What the game doesn’t tell you is that this selection process, in the beginning, has a unique property. Every level selected is shuffled into a queue that all players move through as they complete previous levels. So if you select world 2-2, you may pop into that as your next level. This makes what is generally a relatively small and predictable game much more dynamic.

Yet, Super Mario Bros 35 shakes things up a lot more with the way players “attack” one another. You can select a target manually, randomly, only attackers, players with the most coins, or players with the least time. This works much as it does in Tetris 99. Whoever your choice for the attack, they’ll have every enemy you kill tossed onto their map. While it might not mean much to hop in a dozen Goombas, as you find more deadly enemies like Lakitu or Bowser, things can get overwhelming quickly. 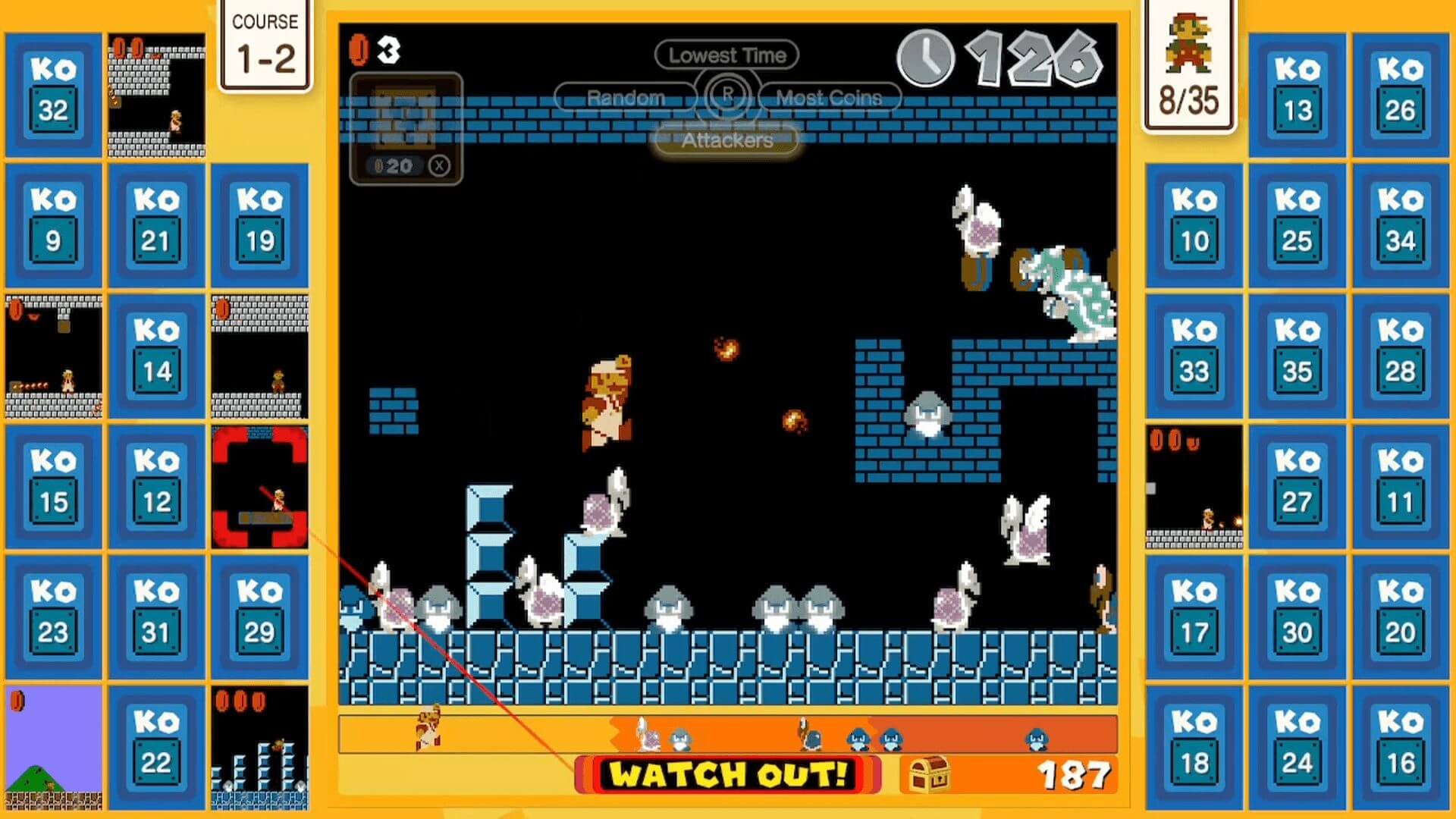 Unlike Tetris 99 and virtually every Battle Royale game ever made, most of the knockouts in any given round aren’t from other players. This is to be expected, to some degree at least. Mario has always been about punishing minor mistakes. Falling down a pit is instant death. At most, you can take three hits from enemies, but at the start, you can only take one. So of course being knocked out by a relatively minor mistake is commonplace. The only way you get a knockout is if one of the enemies sent to another player kills them.

While this sounds pretty lame in explanation, it doesn’t affect the game the way you expect. In fact, with the way enemies work, it can beneficial for you to send as few of these bad guys to your opponents as possible. Every enemy you defeat adds time to your clock. Jumping on enemies gives more time than a fireball. Chaining bounces off their heads multiply that time bonus. Trying to bury an opponent in Goombas may be handing them an easy way to gain tons of time. Time doesn’t become much of a factor until late in the match, though. It only speeds up significantly after many players are defeated.

What this means is that you can easily win the match just by playing carefully and making minimal effort to knock anyone out. That’s odd to me for a game of this nature. Yet, at the same time, playing this classic Mario game with a randomized variety of levels and enemies makes it feel new every time. 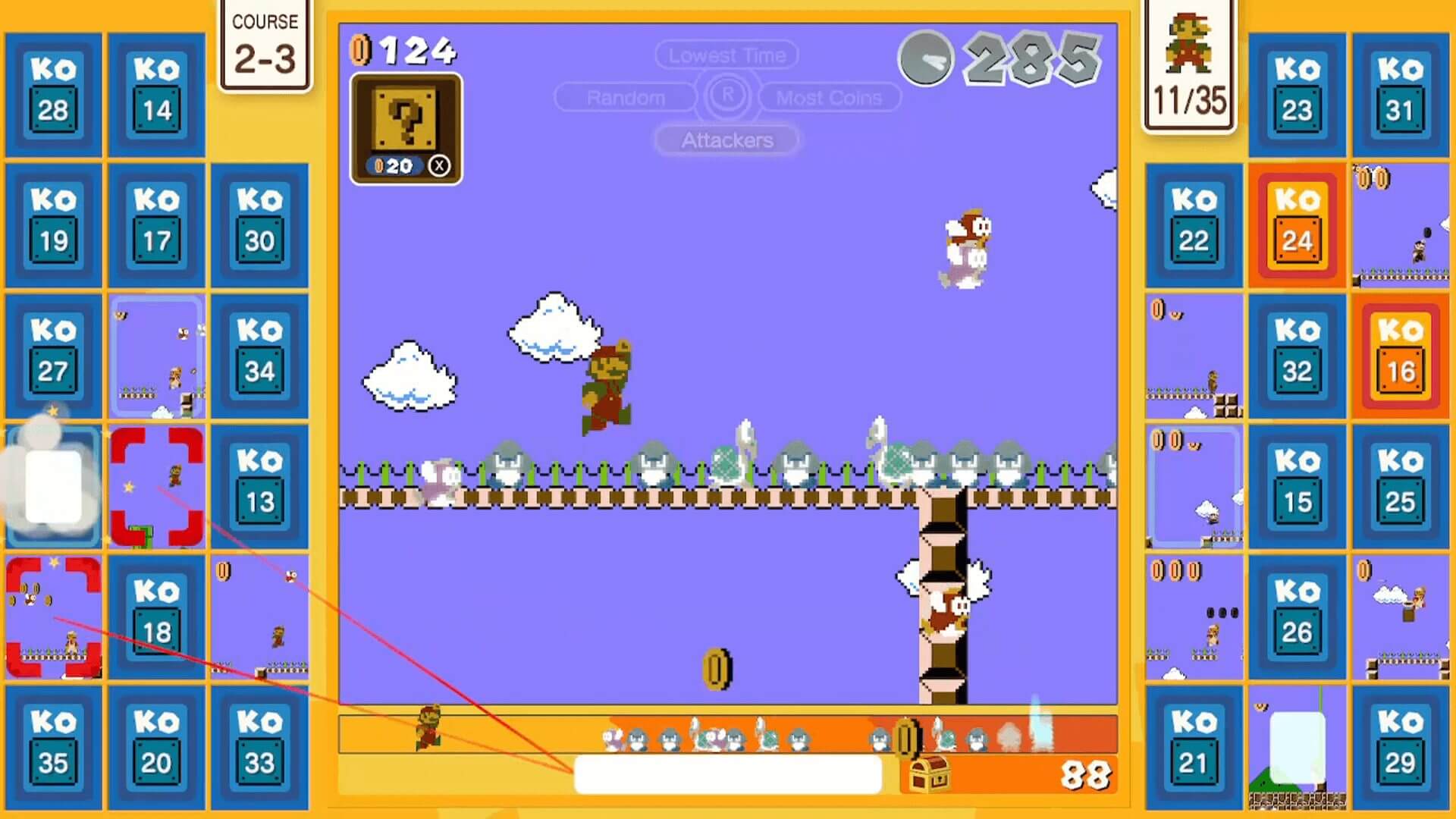 Super Mario Bros 35 is supposed to center around collecting coins. You can use 20 of the coins you grab to get a random power-up at any time. This can be important to victory but is mostly just a mechanic in the gameplay. Any opponents you knockout also have their coins shuffled to you. Whatever coins you have at the end adds to your running total. This total is among a collection of stats you can look at and compare to everyone else playing.

It’s interesting to see graphs and charts of your capabilities (and failures) but I think it’s a little less interesting than they make it out to be. Unlocking player icons can be nice, but I’m not even sure where or if they show up to be seen by other players. Also, being placed on a pyramid displaying your coin collection compared to everyone else isn’t quite the motivational prospect I think the developers assumed it would be. It just seems weird and without much context.

Beyond all of the coin collections and random pyramids though, Super Mario Bros 35 is fun. It’s more fun than the original game in my view. Mostly because it’s the same game I played 30 years ago, but with more mixed in. It might not be anywhere near as competitive as Tetris 99, but it’s still a classic game reimagined. If they could somehow make it feel like you were having more impact on opponents, it might reach that level. However, for a free game (with Nintendo Online), it’s hard to say it’s not worth giving a shot. 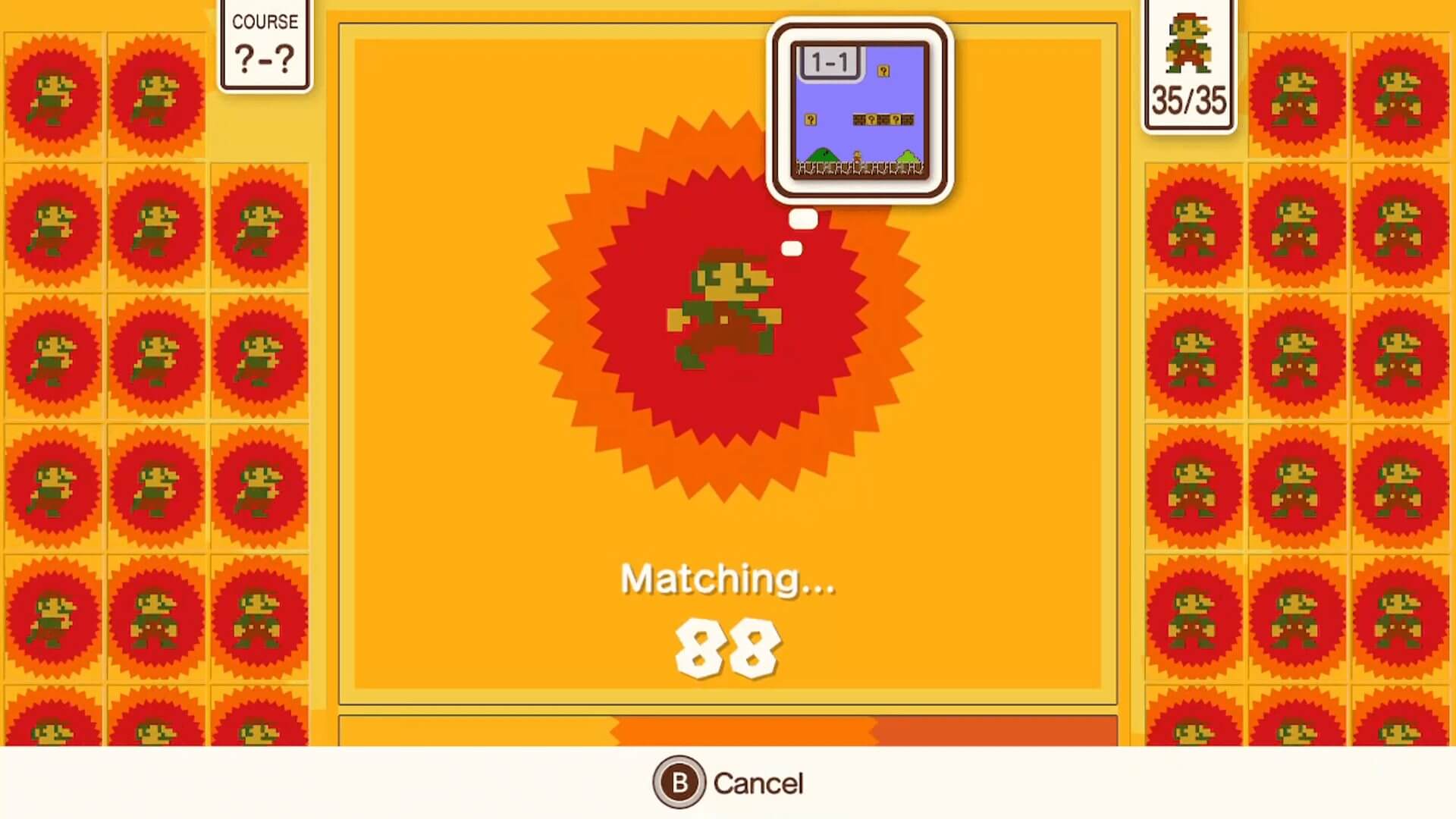 If you like this review, check out some of our other reviews like Age of Empires III or Star Wars: Squadrons!

Super Mario Bros 35 turns the classic plumber platformer into a battle royale that can be fun but doesn't feel like much of a battle. The 35-year-old game holds up as much as you could hope while the experience feels less like a competition and more like just surviving longer than your opponents.