It has been a while since we’ve seen a Star Wars dogfighting game. Especially if you do the right thing and ignore the poor excuse for dogfighting in the recent Star Wars Battlefront games. With the massive resurgence of space sims over the past few years, it’s not surprising EA decided to join the party. Now, with the release of Star Wars: Squadrons, we can finally revisit this classic universe of space combat. 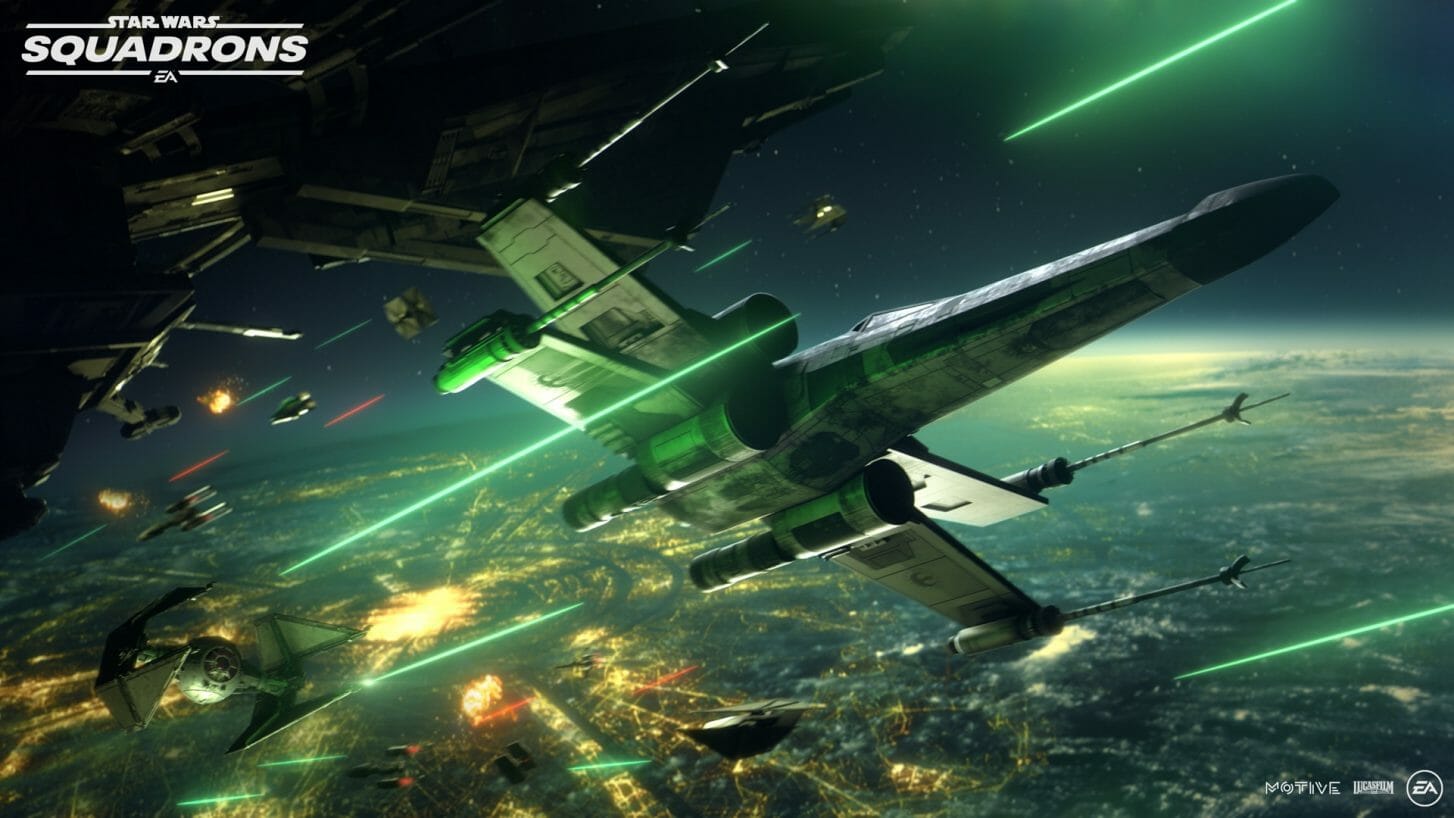 Star Wars: Squadrons has both a solid single-player campaign in addition to the more significantly advertised multiplayer game. The single-player portion, while undersold, was one of the more enjoyable elements for me. Especially given how limited the multiplayer game modes are at launch. The exploration of a post-Return of the Jedi continuation of the Galactic War brings each side of the conflict more in line with one another from a military strength perspective. It also manages to tell a unique and bespoke story independent from anything else in the lore.

The conveyance of the story makes it rather interesting as well. Instead of playing just one side of the conflict, you play an individual silent protagonist on each side. You get to see the plans, reactions, successes, and failures as they weigh on the various characters in leadership and your fellow squad mates. While it does lack some of the flairs of camera work you’d get in normal game cutscenes, the constant first-person perspective made me feel much more a part of the story rather than just a witness. However, I assume this design is there to facilitate the VR element of Star Wars: Squadrons.

The campaign is only 14 missions bouncing back and forth between the New Republic and Empire forces, but each mission hands you loads of ship-to-ship combat with the smallest amount of downtime. It even breaks it up quite often with distinct tasks like attacking capital ships and stations, defending targets, scanning ships, and all of those typical space game adventures. As you progress, you unlock more ships to use and new weapons and items to load on each. This small variety of ships and weapons don’t do too much in single player but have a large impact in multiplayer. 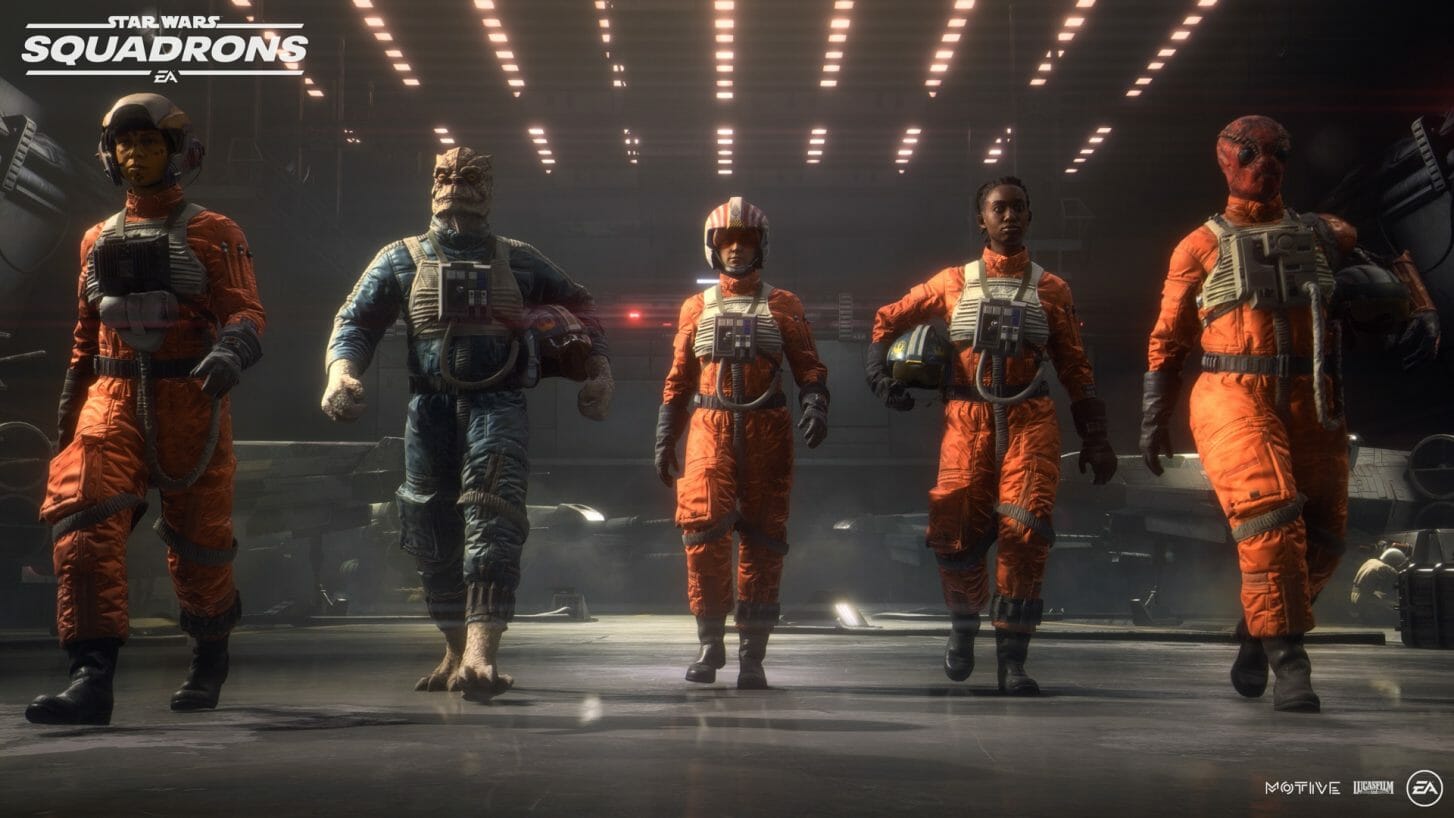 Online, Star Wars: Squadrons tends to feel much different and poses a new kind of challenge. Not only are real players more effective and aggressive than AI, but they also have tougher ships. Currently, there are only two online modes available, a standard team deathmatch called simply “Dogfighting” and Fleet Battles. Dogfighting is where you get to cut your teeth since the game requires you to get to level five before Fleet Battles unlock. However, that doesn’t take that long to accomplish given the XP gained from a single match. The mode is still helpful to get acquainted with the four ship types before jumping in the deep end.

Fleet Battles put you and four other players in a battle to destroy the opposition’s capital ship. This is based on a tug of war mechanic that requires one side to destroy enough enemies to launch an AI corvette into the battle on their side. Once this corvette enters, players begin to attack and destroy the two leading opposition frigates. The enemy squadron strikes back and tries to fend off these attackers all the while tugging the bar back the other way with every kill. Taking out players, the attacking corvette, or the various AI fighters contributes to the bar in the tug of war process.

The use of AI to fill out a battle with a relatively small number of players is very reminiscent of Titanfall and even the original Battlefront. I’ve always found that design to work well since it adds volume to a battle without making matches require dozen of players. At the same time though, Fleet Battles can still become frustrating when attacking these large ships. It often devolves into racing headlong into an attacking corvette or defending frigate. By the time you get to the capital ship attack, you sometimes spend more time spawning and flying across the map than attacking. 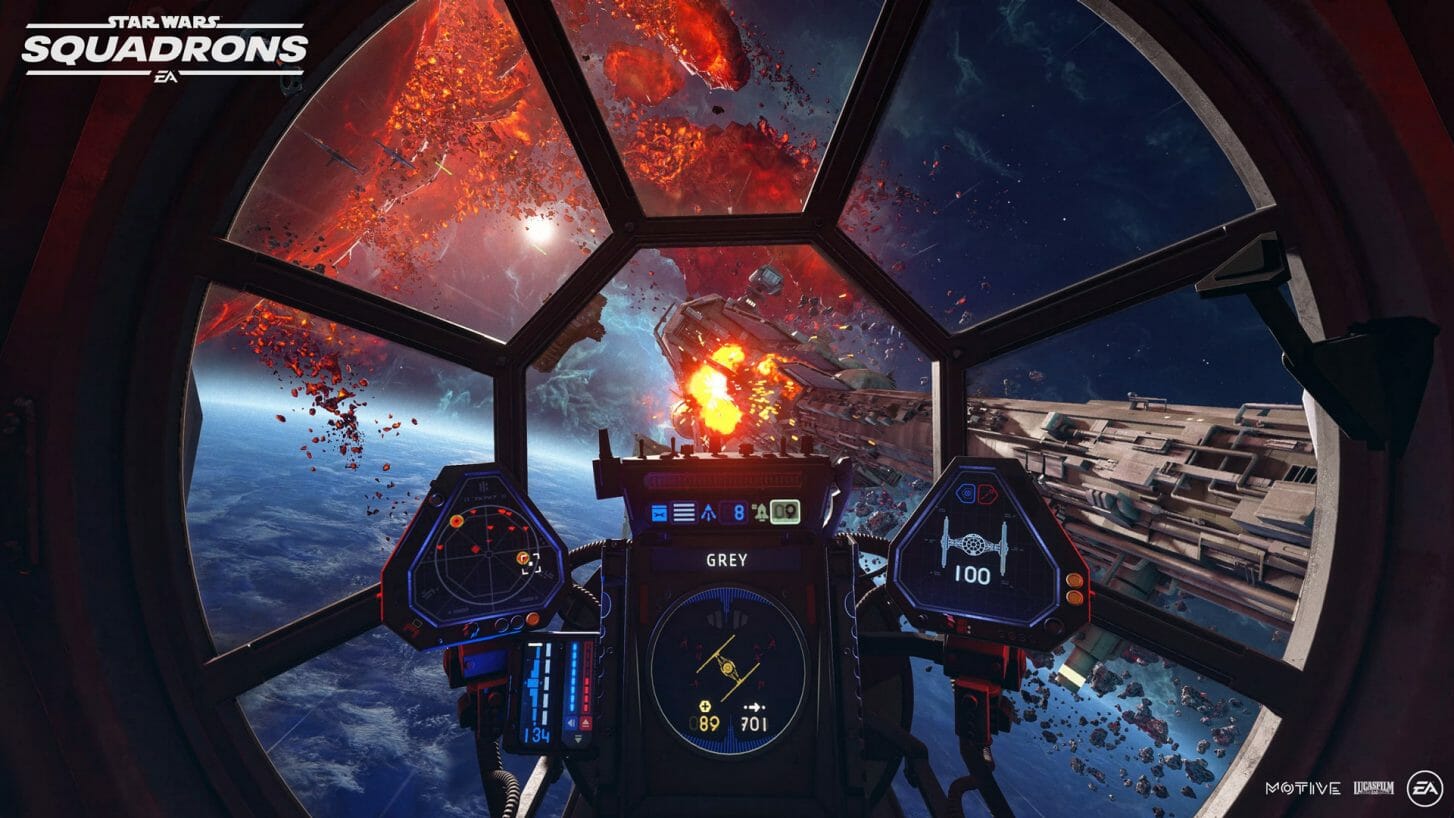 Compared to most space sims, Star Wars: Squadrons isn’t complex. I tried to play it with a joystick but found that the movement is generally so slow that its precision was unnecessary. I was regularly swinging it around nearly to its limits. Potentially, I could have edited the curves to compensate for this, but it was much easier to use a controller. However, the fact that Squadrons plays so slowly both helps and hinders the game.

There were many moments where after I died I’d see a kill cam with a person just sitting stationary rotating to fire at me. This was especially true when I was flying one of the slower ships like the bomber or support classes. These can move so slowly that the quicker fighters have an easier time attacking them by not moving at all. While I understand the desire to make the game approachable, this takes much of the authenticity out of the experience. When this experience combines with a relatively low time to kill for ships out in the open, it can be a little frustrating to play these slow classes.

In the fighters, however, the gameplay feels much more fluid. The additional speed and agility are just enough to make for some incredible moments zipping through ships, asteroids, and stereotypically overly dense debris. With the ability to customize your ship with weapons, engines, shields, and armor of varying types, the game has more depth in combat than other modern Star Wars games. In addition, you’re can shift power to engines, weapons, or shields increasing the skill ceiling for effective combat.  I just wish the secondary ships were as enjoyable as the fighters were. 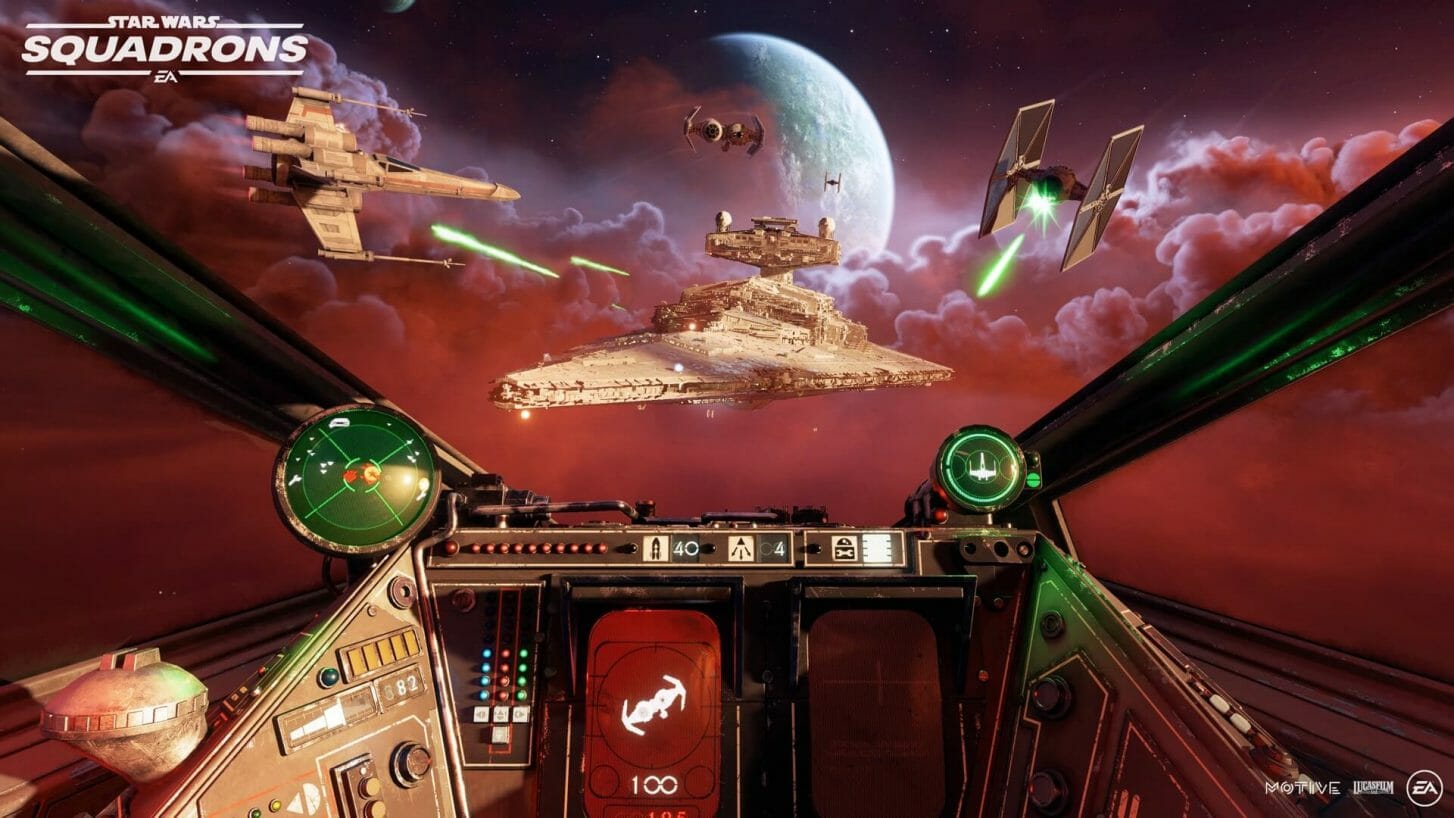 The combination of a well-crafted single-player and addictive multiplayer within a single game is rare these days. Star Wars: Squadrons surprisingly pulls this off. There are, of course, areas where it could improve. For instance, graphically, the game seems a bit limited. I assume this is to accommodate the high rendering requirements for VR – which is a feature they push in marketing. Ship destruction in particular looks dated and the game feels a bit flat when played on a normal monitor. While it’s nice to be able to look around in your cockpit and the cutscenes, it feels unnecessary without VR.

The limited multiplayer modes may be a speed bump for some players as well. I found Dogfighting to be more accessible and action-packed than Fleet Battles. Yet Fleet Battles is the only mode that currently has ranks. While that mode has plenty of fun moments, the back and forth can become monotonous if it goes on too long. Then there’s the issue where if any of the ten players leave, the match isn’t counted for your ranking. Therefore, while I’ve completed several matches, only a handful actually counted. If they could resolve this (perhaps with drop-ins) and make the whole thing more fluid, I think it would raise the bar on Fleet Battles.

Overall, Star Wars: Squadrons is a great step forward for Star Wars dogfighting games. These have been around almost as long as 3D graphics have been popular in videogames. Squadrons delivers a deeper and broader experience than dogfighting in Battlefront, even while it presents a limited scope. If they can work on some balance issues with the speed, the only thing I would want is more. More of the single-player campaign, more game modes, more ship options, everything. Will that happen? It’s hard to tell, but the game has a following that seems to like it, so I’m hoping it does.

If you like this review, check out some of our other like Microsoft Flight Simulator or Star Renegades!

Star Wars: Squadrons embraces a slightly more complex approach to the typically arcade-style dogfighting, but still has the spectacle and fun for broad appeal. Both the single and multiplayer are enjoyable, but with only 14 missions and a handful of extra game modes, it left me wanting more of nearly everything.