Crude, offensive and sometimes downright disgusting, what is there not to love about South Park? From Scientology to global warming to George R.R. Martin’s obsession with wieners, Matt Stone and Trey Parker’s creation has confronted many super cereal issues over the past 17 years and in doing so have gained itself a legion of adoring fans. The show though has not been without its critics and with subjects often being approached with less fragility than Kayne West at an awards ceremony; South Park was never going to have the same widespread appeal of some of its more placid cartoon peers. However, back in 2011 when the news hit that a new and improved game was being made based on the shows antics, the world fizzed with the excitement of the prospect. Fast track to the present day and after what has seemed like an eternity of setbacks and delays, South Park: The Stick of Truth is finally here. The question is though: was it worth it the wait? In the words of our beloved big-boned friend, “Does a bear crap in the woods and does the Pope crap on the broken lives and dreams of 200 deaf boys?”

Written by Stone and Parker, the game is set in the fictional Colorado town of South Park, where you, The New Kid or ‘Douchebag’ as you will be so graciously dubbed, have just moved with your family to get away from your mysterious past. Joining forces with the Grand Wizard Cartman and his human army, you become embroiled in a fantasy war with the elves, run by the Elf King Kyle, for the Stick of Truth; a powerful twig that gives its owner control of the universe. An RPG that not only allows the player to take on an alternate persona but the characters inside the game as well, the story genuinely does feel like the imaginative work of a nine-year child, albeit a very foul-mouthed one. 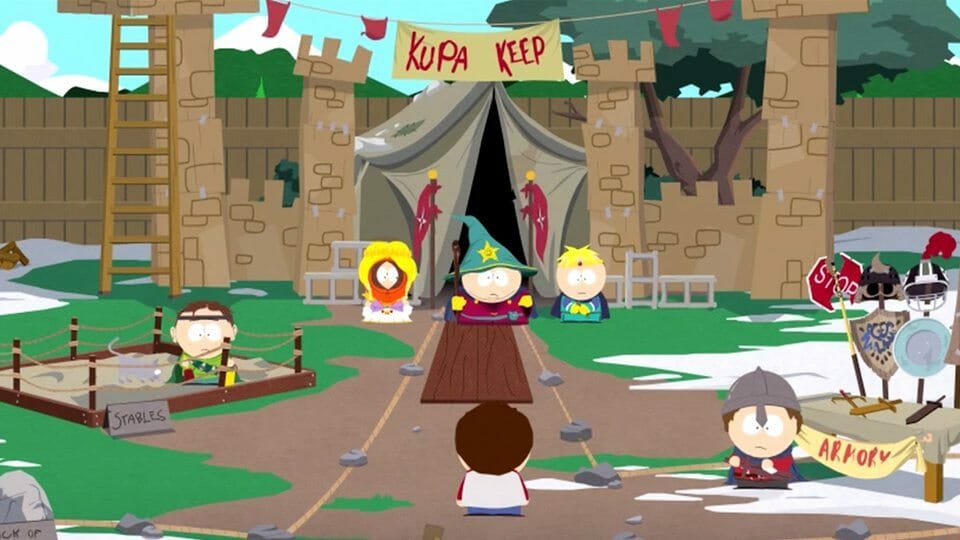 The credit however, cannot go to the fictional boys of South Park but to Stone and Parker who have provided within this game some of their finest writing in years. Doused in the same crude and abrasive humour as the show, The Stick Of Truth is as hilarious and outrageous as you would expect. Whether you’re watching a cut-scene or just simply listening to the in-game dialogue as you run around town, there’s plenty to guffaw at here regardless of whether you’ve seen the show or not. Of course hardened fans will not only understand more of the in-game references to its TV counterpart but also appreciate some of smaller touches such as the revealing superhero costume in Kenny’s closet and the various photos dotted around depicting episode scenes. But for those who have never encountered the series, the storyline is both simple and funny enough to be thoroughly entertained by, providing you too share the shows warped sense of humour. However, if you find South Park distasteful or just plain stupid then The Stick Of Truth is not a title you will enjoy as the greatest strength that it possess is the unbridled ability to keep you smiling in their trademark mixture of both shock and horror from start to finish. So, if watching a grown man engulf a young boy with his anus or witnessing Nazi foetuses running amok isn’t something that you’d find particularly funny, then perhaps this isn’t for you.

Being that this is a video game however, a good story must be part of and not the whole package. Thankfully, there is some gameplay substance here to match The Stick Of Truth’s black comedy style and whilst it isn’t one of the longest titles in gaming history, the time that you do get with the game is fun throughout. From the amusing main story quests to the often-bizarre side missions, you have the freedom to do these tasks at your own leisure and all with a friend in tow. With Butters accompanying you from the off, you’ll be given more buddy options as you progress, each of which come with their own traits, witty catchphrases and uses such as Kenny’s handy technique of distracting enemies with his unfortunately not so ample bosoms. 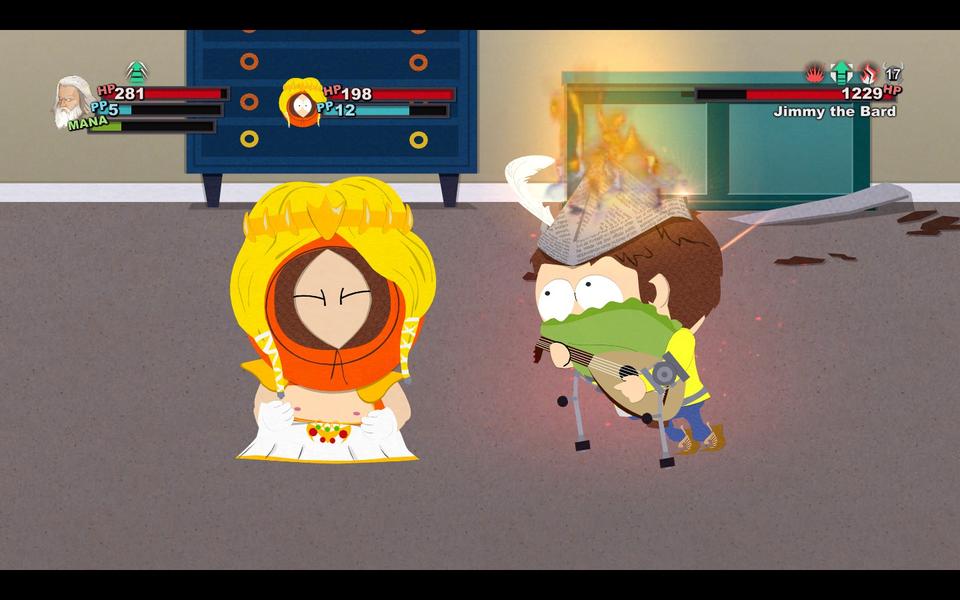 If you don’t feel like being the Grand Wizard or anybody else’s bitch for that matter then you can always branch out on your own and explore the town. Twelve fast-travel points are located amongst South Park and once you’ve found them all, your noble steed Timmy, equip with his horse and wheelchair carriage, will transport you between them providing you’re going from one to the other. Investigating your surroundings is recommended when playing this title as with any RPG it is an essential method of discovering useful or just simply awesome new things such as weapons, items and pieces of ‘stylish’ clothing. However, unlike any other role-playing title that you will have come across, your places of search are more likely to be spaceships filled with anal probes than picturesque mountaintops so be prepared to wade through the unusual.

Another large aspect of this game is the fighting and during your time in South Park there will be plenty of battles to be won. From elves to aggressive blobs of bacteria you will meet a varied range of foes with each combat-sequence taking place in the same turn-based format. Fighting along side one of your buddies, eventually of your limited choice, you will take control of both you and your companion to defeat the adversaries in front of you. Aside from the traditional method of using weapons, you can also use your abilities to defeat enemies, with your choice of class depending on what you can do.

Choosing from the following options: Jew, Fighter, Mage and Thief, you will select which class you wish your character to be at the start of the game, with opportunities to upgrade your abilities arising once you level up, which can be done via winning battles and completing quests. Buddies also get their own personalised attacks, with different levels of PP being taken each time one is used, depending on how much they require. Additionally you can use magic to deter your opponents or as it’s commonly known as, farting. Requiring your bar of Mana to be filled to a certain point, again depending on how much the attack requires, you can opt to fart and smack your weapon at the same time or you can simply eject air into your enemies face causing them to understandably gross out and vomit mid battle. Add-ons, known as Strap-Ons, can also be used in the game to add extra damage or armour to your weapons and outfits, whilst battle perks will become available once you’ve made enough friends to warrant such privileges. 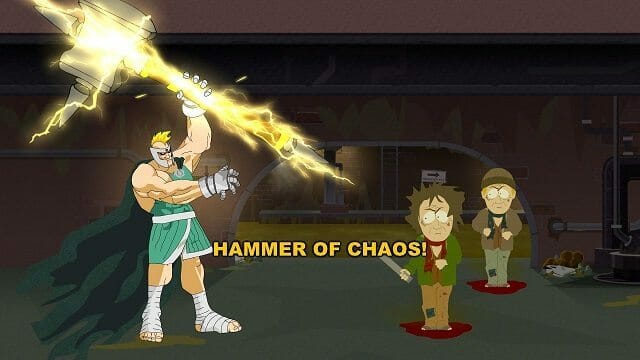 A simplistic fighting model, the combat system in The Stick Of Truth isn’t hard to manoeuvre nor it is difficult to master. As for the battles themselves, they lack any real problematic challenge, especially as items can be used during turns, as well as attacks. Given that you can regenerate health or opt to have two goes at inflicting damage on any given turn providing you have the items to do so, most enemies don’t provide much of a contest, which may not appeal to players who thrive on testing gaming experiences.

That’s not to say that some of your foes aren’t partially difficult, several are a real pain in the rectum but most players will likely be able to defeat them in a relatively short period of time, especially if you use your noggin. This fact may put some people off the game and whilst it does slightly dampen The Stick Of Truth’s appeal, watching a plague of Jewish retribution annihilate a midget does go a long way to making up for it. Of course, even the funniest of combat techniques can become a little repetitive after a while, with times arising where you’ll avoid combat for fear of falling foul to too much, too soon. This issue however, is a minor blimp in The Stick Of Truth’s road, especially considering all the major positives that this game has to offer.

To say that this is by far the best TV to video game adaptation that has ever been made may sound a little over the top but The Stick Of Truth truly has managed to do what so many others have tried and failed to do: be a licensed game that doesn’t suck. Yes there are a few laggy moments when moving from one area to the next and loading times are annoyingly frequent but these problems are greatly over-shadowed by how much of a thoroughly enjoyable and bat-crap crazy experience playing this game is. Being an obvious South Park fan, perhaps there is some bias here but if you love the show then you’ll undoubtedly love this too.

South Park: The Stick Of Truth may just be the funniest title of the year and whilst it may not be the video game for everyone, we should all respect its outrageous and awesome authoritah.

South Park: The Stick Of Truth 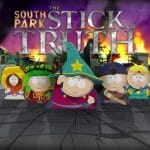 […] South Park: The Stick of Truth was the South Park game that fans had been longingly waiting for. While the game might be easy to break thanks to its mechanics; it also brought a new era for licensed games with its engaging design, funny moments, and great mechanics. […]