Taking Back the Light – Destiny: The Taken King Review

For every negative thing people had to say about Destiny upon its release (poorly told story, repetitive mission design, end-game Light system, Peter Dinklage, etc…), there were many who could overlook all of that and find something beautifully simplistic and addicting in Destiny‘s core game design. The overall gameplay mechanics were extremely sound, with tight controls and constant dopamine releases stringing players along until they found the gear that would raise their light level to the limit. What Destiny: The Taken King offers is not only an expansion to the game’s story and content; it also offers a complete retooling of most issues that plagued the core game’s initial release.

Taking place after the events of The Dark Below (you cannot play Taken King without at least owning both previous expansions, The Dark Below and The House of Wolves), Guardians are now being threatened by Crota’s father, Oryx. Titling himself “The Taken King,” he has been capturing the Fallen, Hive, Vex, and Cabal and enlisting them in his army of Taken. The Taken are the new enemy race that players will be fighting against as Oryx wages war on the Guardians that killed his son.

Destiny has never had a problem with visual design, as most of its levels were rather striking and enemy design, while slightly generic, still felt appropriate to the world. The Taken are what happens when Bungie gets its most creative. Visually striking, they act as stronger, faster counterparts to their vanilla-selves. A Taken Captain (originally of Fallen descent) now can shoot a massive black cloud that damages you if you are hit by it, but also clouds your vision to an extreme degree. Taken Thralls walk slowly but can teleport as they approach, making it more difficult to kill them. Pretty much every Taken version of an original enemy becomes extremely threatening, making them a suitable enemy presence for Oryx, who seems hellbent on revenge.

The fact that I can explain what the story of The Taken King is without having to mention that I read it in a Grimoire card is exactly why The Taken King is a marked improvement over the original Destiny. There are more cutscenes which help give characters such as Cayde-6 (voiced by Nathan Fillion) and Eris Morn (voiced by Morla Gorrondona) more gravitas and presence in the narrative. Sure, they still do a lot of their chatting with players during gameplay, but there is a clear sense of personality and significance to the characters that was lacking previously. They also act as the main characters aiding Guardians in The Taken King’s main quest.

There is more than just one big quest to follow though, as Bungie have gone ahead and added several quests given by multiple characters throughout the Tower. Quests can range from doing a set number of patrol missions to unlock a high-ranking target that needs to be killed, to gathering resources, to completing Crucible achievements. They’re not simply glorified bounties as they branch off into other quests, expand beyond their initial scope, or give extremely beneficial rewards. While bounties still exist and there is definitely a grind that persists throughout certain quests, it feels like it has an endpoint in sight.

This leads to The Taken King‘s greatest change: Leveling. The game now allows for users to simply kill for experience to hit the illustrious level cap. Forget trying to find the right equipment to raise your light level. Okay, well, forget that until you’ve hit level 40. Once you’ve hit maximum level, the game becomes a similar experience as what vanilla Destiny was — players are left to find different ways to get exotic and legendary equipment that will raise their light level high enough to unlock new ways to grind. Raising light level previously seemed like an arbitrary grind, but now there are rewards tied to it and when getting the ability to do Weekly Nightfall Strikes and Daily Heroics, the game becomes more generous with its loot rewards.

Even said loot now feels more special because players can improve legendary equipment without automatically moving to something of higher attack value. Uncommon loot is now occasionally higher in attack or defense value than Legendary loot, which would normally mean switching to that item because it is just better. However, now players can “infuse” Uncommon items with Legendary ones to keep the Legendary item and raise its attack or defense value. It costs multiple currencies but is worth doing to make players carry more unique weapons from one another, as opposed to the common sight of everyone having the same gear.

The currencies from the original Destiny have been reduced to a smaller variety as well, most notably in the combination of Crucible and Vanguard marks into a single currency: Legendary marks. These make acquiring Legendary and Exotic loot much easier from vendors as Legendary marks pile up rather quickly if you do the daily PvP and PvE content. There are still strange coins and motes of light but they seem to be doled out at more regular intervals and for smaller tasks than previously. What is great is that The Taken King allows users to also take a character that is under level 25 and boost it immediately to that level so they can skip the original game and jump right into The Taken King. It might not make a lot of sense story-wise, but the assumption is that these will be for a player’s second or third character.

You’ll want to get into The Taken King‘s quest as soon as possible because the third subclass that has been added to each character feels wholly new and unique, adding another layer to the already hectic battles that can occur with different subclasses. I mainly played through the game with my Warlock’s Stormcaller subclass and had fun with it, though it has more of a long burn to it than the immediate satisfaction of the Voidwalker. My little time with the Hunter’s new subclass also sees it having a longer duration on its super. The Titan’s is a far more prompt effect, though.

Finally, there’s The Court of Oryx and the new strikes which both don’t really offer much in terms of something new, but they are tweaks that provide more variety into the perpetual grind. The Court of Oryx acts as a mini-horde mode, similar to the Prison of Elders from The House of Wolves content pack. It’s repeatable and a good way to farm engrams while providing a little bit of a challenge. Some enemies require a little problem solving before being damageable, but generally it does wind up being akin to any other horde mode, just smaller in size. Meanwhile, strikes are the same as they’ve always been but with more puzzles so that it doesn’t wind up just being players running to an area, killing enemies, then repeating over and over.

With all of the good that the new changes and additions have done, there are still some areas that could use some improvement. The new area that players can patrol – the Dreadnaught – is great for farming kills from various races, but the overall environment design is far too similar to underground areas in the Moon. It makes sense contextually because it is a Hive spaceship that Oryx is using as a fortress, but it also means you see a lot of areas that are pretty similar to the Moon. I love what environments are there for Destiny, but The Taken King could have probably used an environment more unique – even if the Taken are also recycling designs.

Destiny‘s expansion, The Taken King, is a large improvement over everything that Destiny used to be. It takes more care in its story than it ever did before, with less expectation from players to dig into Grimoire cards for knowledge. The way everything is crafted lends to a more satisfying experience. I’ve probably spent around 30 hours now playing Destiny in a lot of the same ways I used to, but I don’t feel like the game is somehow conning me into caring about the grind that it dedicates itself upon. I do the grind because there are plenty of rewards that come way more often than previously. It’s no longer just about the loot because I finally care about the fight against the Darkness. 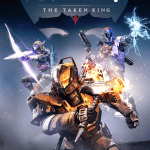 Rise of Iron, Destiny's Next Expansion has Been Unveiled

[…] can read our review of The Taken King expansion from last […]

[…] great news for Destiny fans, as the game has seen a lot of flack lately from its lack of content. Our review of The Taken King, Destiny‘s last expansion, highlighted the interesting story and compelling […]