Teacup, a short indie game from newcomer Smarto Club, released this week. The trailer exudes a cozy cuteness that speaks to me. So much so, its been a game I’ve hyped up in the last month. All the makings for a cozy indie are there – from the adorable protagonist, memorable characters, and delightful art style. And, in many ways, Teacup achieves its goal. However, despite being very cute and very cozy, it very comfortably meets expectations for a cozy indie without ever quite exceeding them. 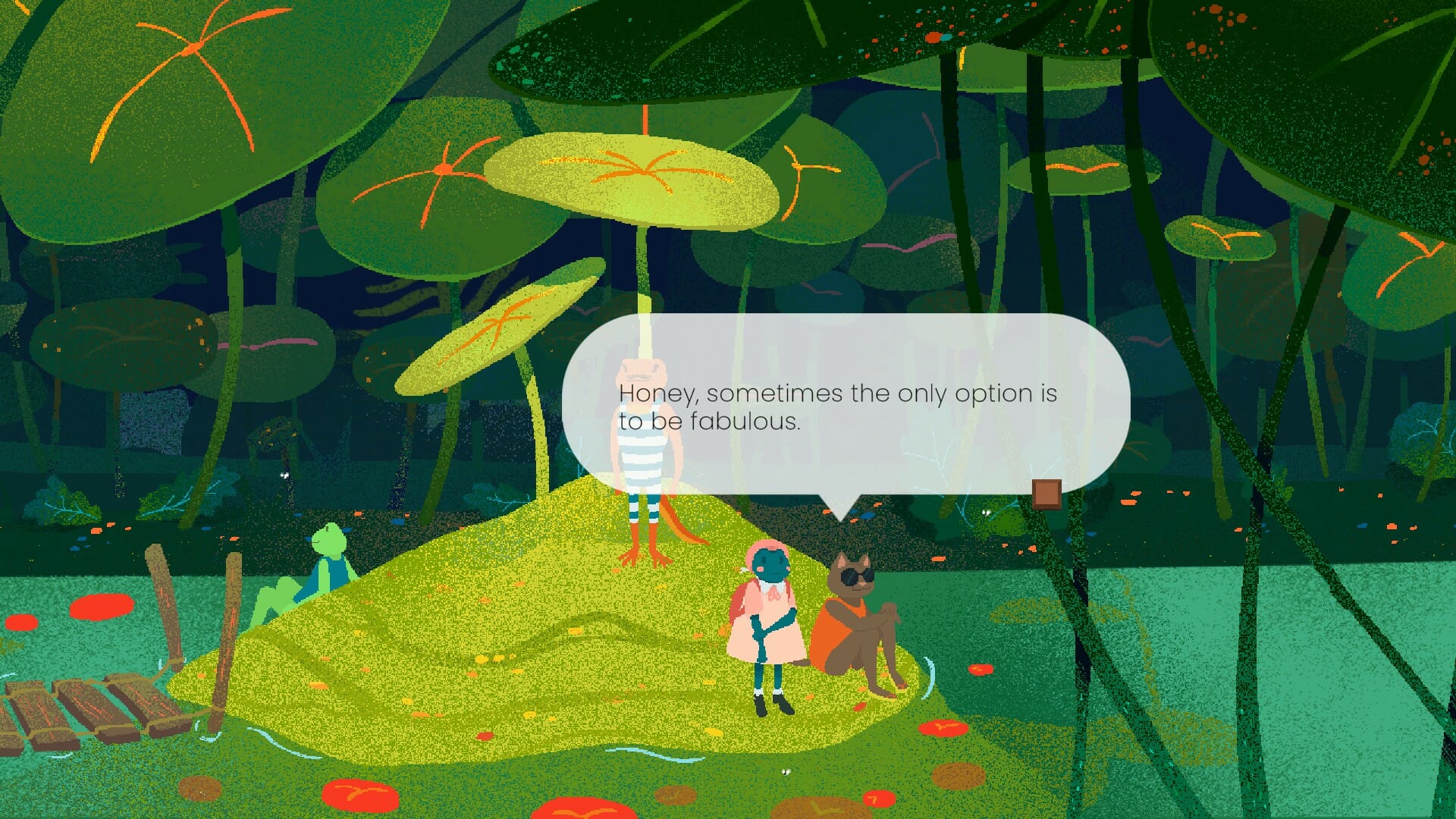 Teacup, an introverted frog who lives at the edge of a forest, loves tea. Naturally, she wants to host a tea party for all her dearest friends. Much to her dismay, the day before the tea party, she discovers she is out of tea! Despite her introverted tendencies, our protagonist must buckle down and do that which is scariest to all introverts: head out into the world and find more tea! From there, we follow Teacup as she walks around her home, Little Pond, meeting a variety of residents, some of whom are able to share their tea with her.

As a whole, the story is very sweet and initially attracted me to the game. And, on all fronts, it’s nice. In a world where so many games make you choose between being good or being evil, it’s nice to play a game where the only option is to help your fellow townspeople. 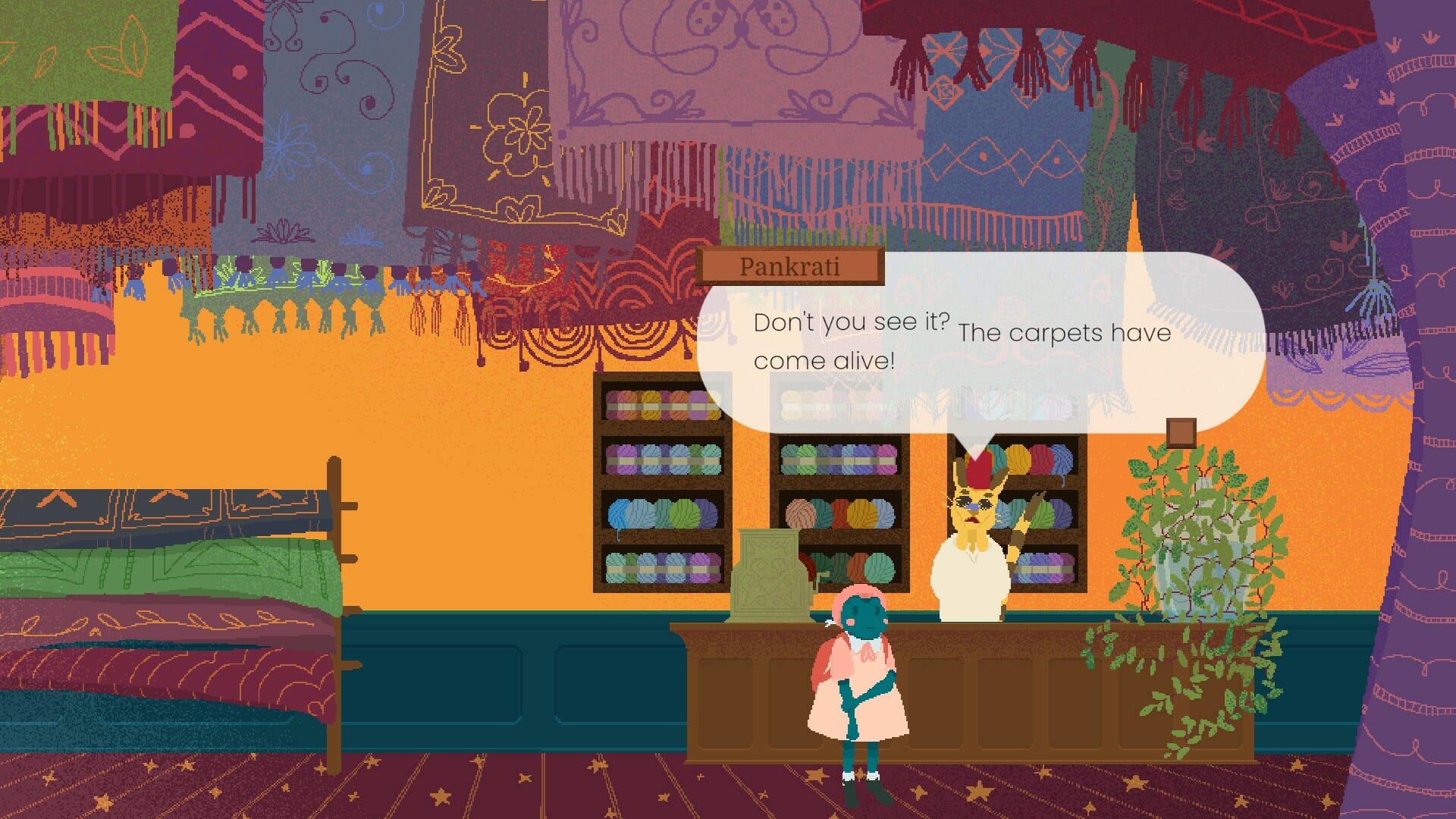 One of the most notable things in Teacup would be its design. The art reminds me an updated version of the PC games I played as a 90s child. However, the aesthetic is updated to include a sophisticated palette. Every scene looks like it was plucked directly from a child’s storybook.

Though simple in design, the characters feel alive. Teacup’s idle animation when speaking to people looks just like how an anxious introvert would speak to a stranger. The other townspeople have similar personality expressed not only in their appearance and dialogue, but their body language. This is quite the feat for a new indie developer; Little Pond feels alive.

Beyond that, the people who inhabit Little Pond are memorable. From an old owl who used to adventure, to two magicians living outside of town, to a competitive swimmer, who also happens to be a salamander – everyone contributes to make this world feel lush with life. 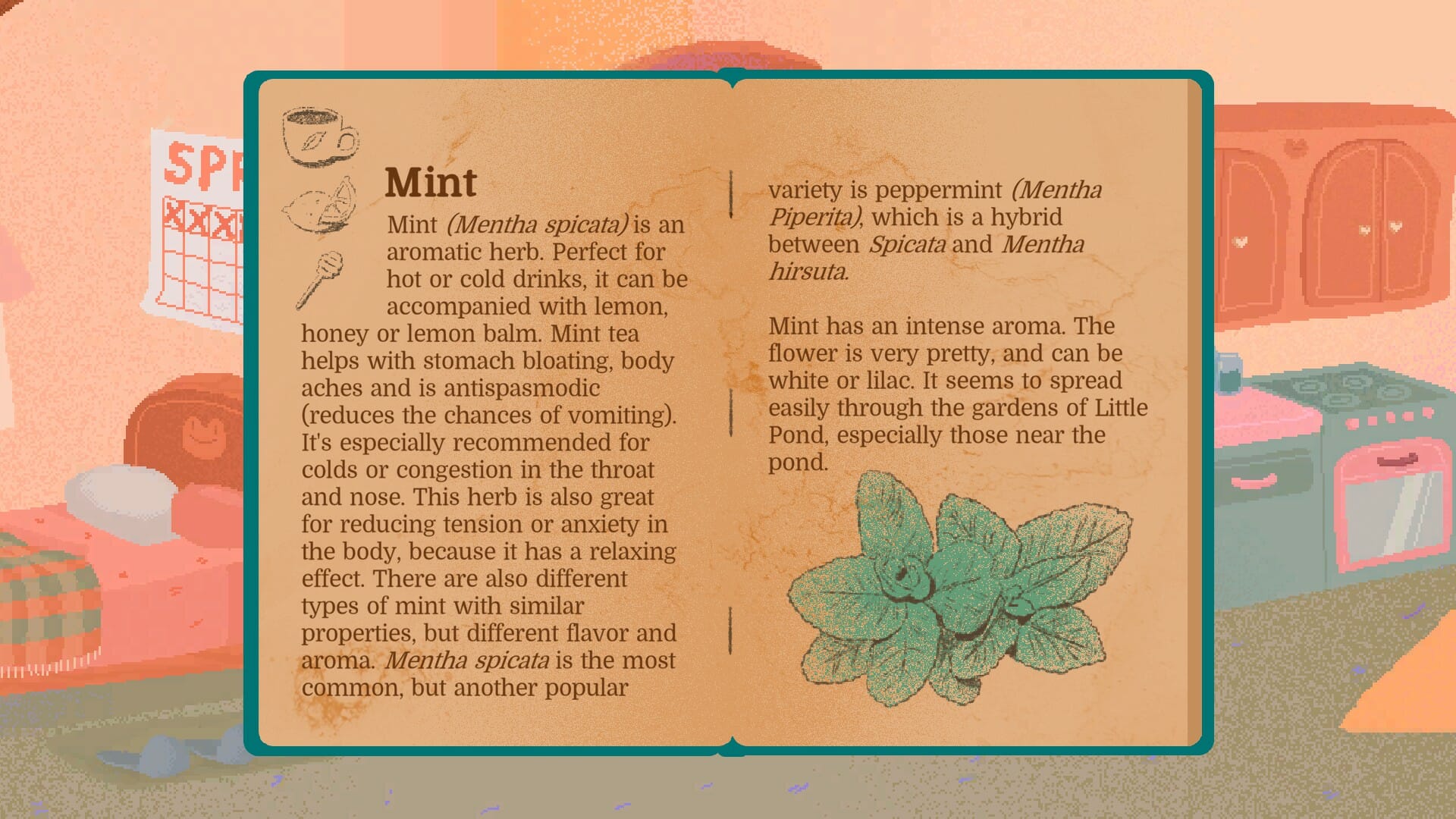 As players search for tea ingredients with our protagonist, they will check their handy-dandy tea notebook. For every ingredient you are looking for, you will learn something about its properties and how it is used in tea. There is even a cookie recipe included!

Additionally, the game seems to have wholesome lessons built in the narrative. As Teacup walks around town chatting with various friends, everyone remarks at how happy they are to see her. It is clearly a surprise to see her leave the house! Everyone praises her for going on her own adventure. Even if it isn’t as big as some people’s adventures, they are happy to see her do her best. I cannot help but find this encouraging. Competition can be found everywhere in the gaming world. Everyone wants the highest score or to be the best. To have a game that so directly contradicts that message by letting players know that doing their best can be an adventure in and of itself was a nice change of pace. 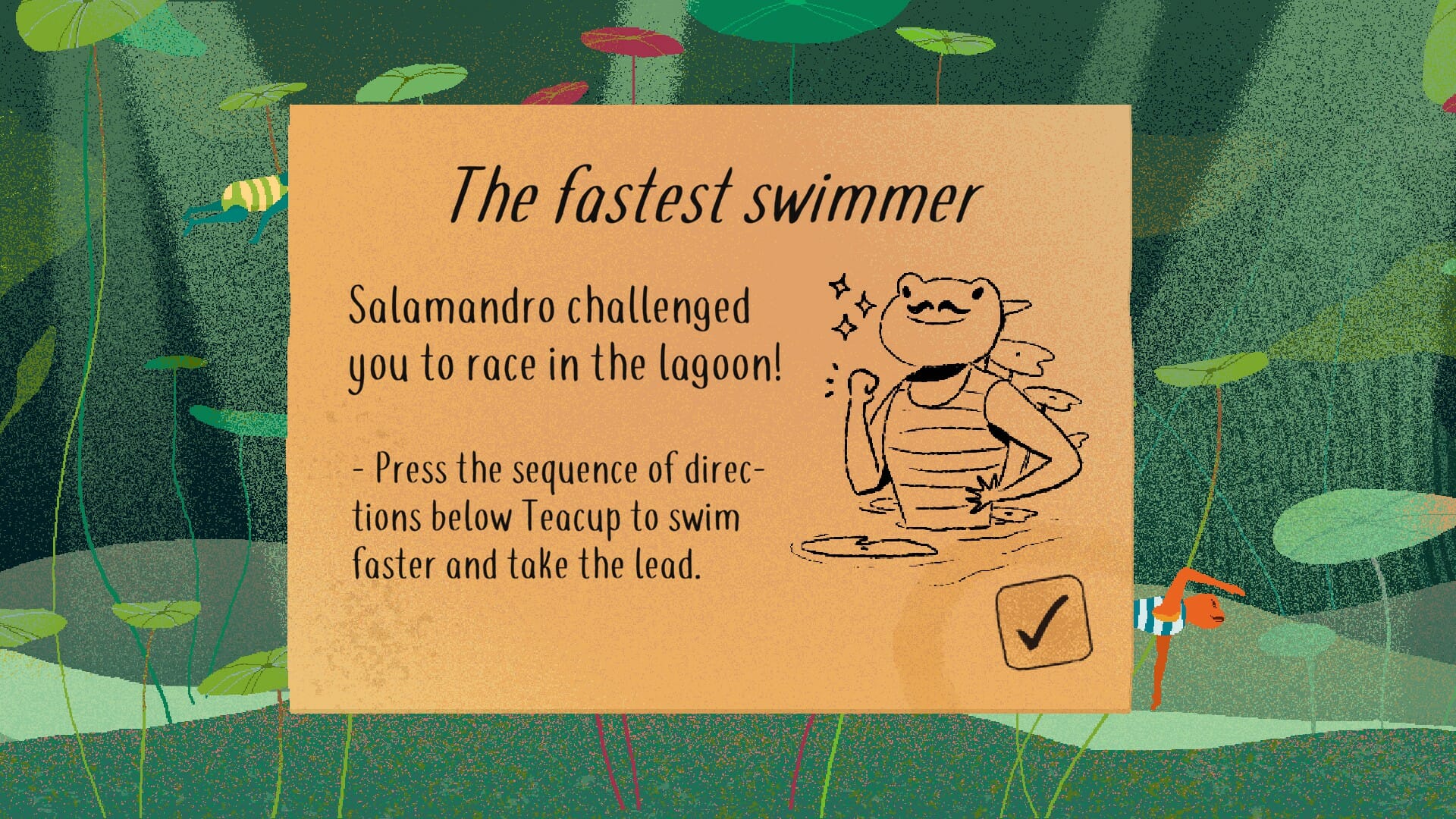 Exploring and Puzzling with Teacup

With that said, Teacup is not challenging at all. To be honest, I’m under the impression that the primary audience for this game is likely families and children. The game has a narrative focus, with puzzles interspersed throughout the world. None of the puzzles come across as particularly hard, nor do any of them have a “lose condition” (that I found).

Obviously, nothing is wrong with that. It’s okay for games to be easy and focus on exploration or the narrative. That said, personally, it would have been nice to have a bit more a challenge. That said, given as I believe this game’s target audience is likely families and children, I understand why the puzzles were as simple as they were. 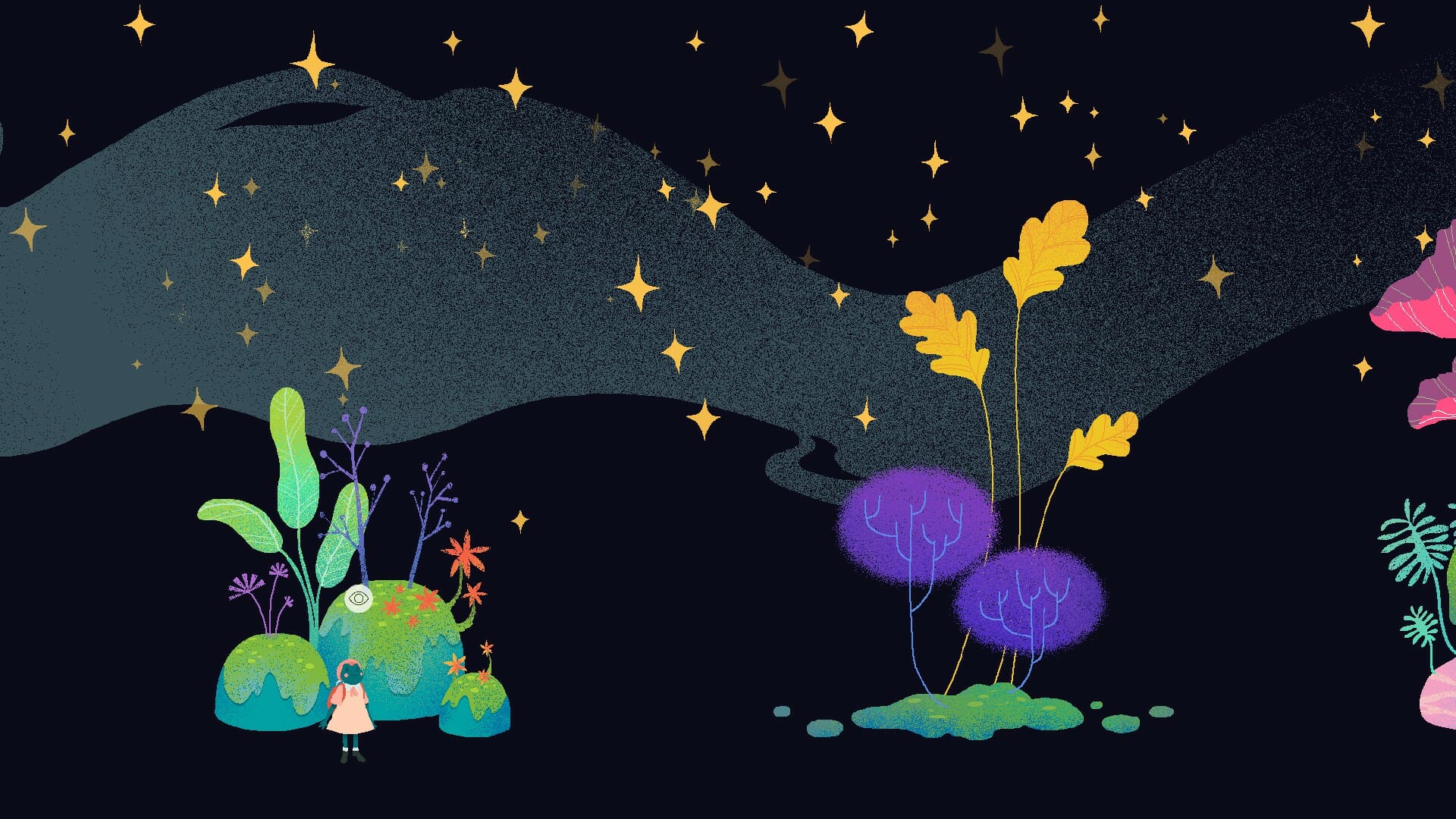 With the caveat that I enjoyed the game, regardless of the simplicity of the puzzles, it’s important to note that there were points where I felt a little confused about the audience. For example, when Teacup visits the wizards, they give her a “dream tea”. This tea sends her to a psychedelic landscape (beautifully illustrated, of course), where she explores. I’ll never complain about a psychedelic adventure, but it felt a little weird in a family game.

Overall, my biggest issue with Teacup is that though it is extremely cozy and very cute, it never quite feels as cohesive as other games in the indie-exploration genre. Frog Detective is a similarly short, exploration game, but the combination of aesthetics, dialogue, and content make it feel perfectly complete. This game tries to straddle the line between family game and game for everyone. It falls just a little bit short.

With that said, as a whole, Teacup is good! I believe it set out to create a family-friendly game about a very cute frog, and it managed to do just that. Yes, there were some strange choices with overall tone, however, as Smarto Club is an first-time indie developer, I’m very excited to see their future games. As a freshman release, Teacup is wonderful. We love to see a game break some gaming conventions and strive for wholesomeness.

If you’re interested in checking it out, Teacup can be found on Steam.

This review is based on a key provided by the developer

A cute and cozy indie game that hits the mark in most ways, save for a few issues with tone!