The Caligula Effect 2 is quite an intriguing game. While I never tried the first game, the second provides an interesting story in an often bizarre yet charming world.

The game’s story takes place sometime after the first game and begins when you, the silent protagonist, meets Regret, a virtual doll who offers you a better life through Redo, her accurately named virtual utopia. However, after accepting and entering this world, your seemingly perfect high school life is then interrupted when yet another virtual doll named χ forces her way into your life and opens your eyes to the realities of Redo. It is then up to you, along with other friends seeking to leave / destroy to this fake world, to fight your way out against many of Regret’s musician colleagues, each vastly different and stronger from the last.

The Caligula Effect 2 story structure is almost Persona-like in its execution. First, the game introduces the world and premise and then showcases what the player is up against. More characters, each of which has their own unique stories to tell, from geeks to delinquents, are then introduced progressively to flesh out the game’s overall story. Unfortunately, The Caligula Effect also includes the silent protagonist trope, but that’ll probably continue to be a trope in JRPGs for some time. 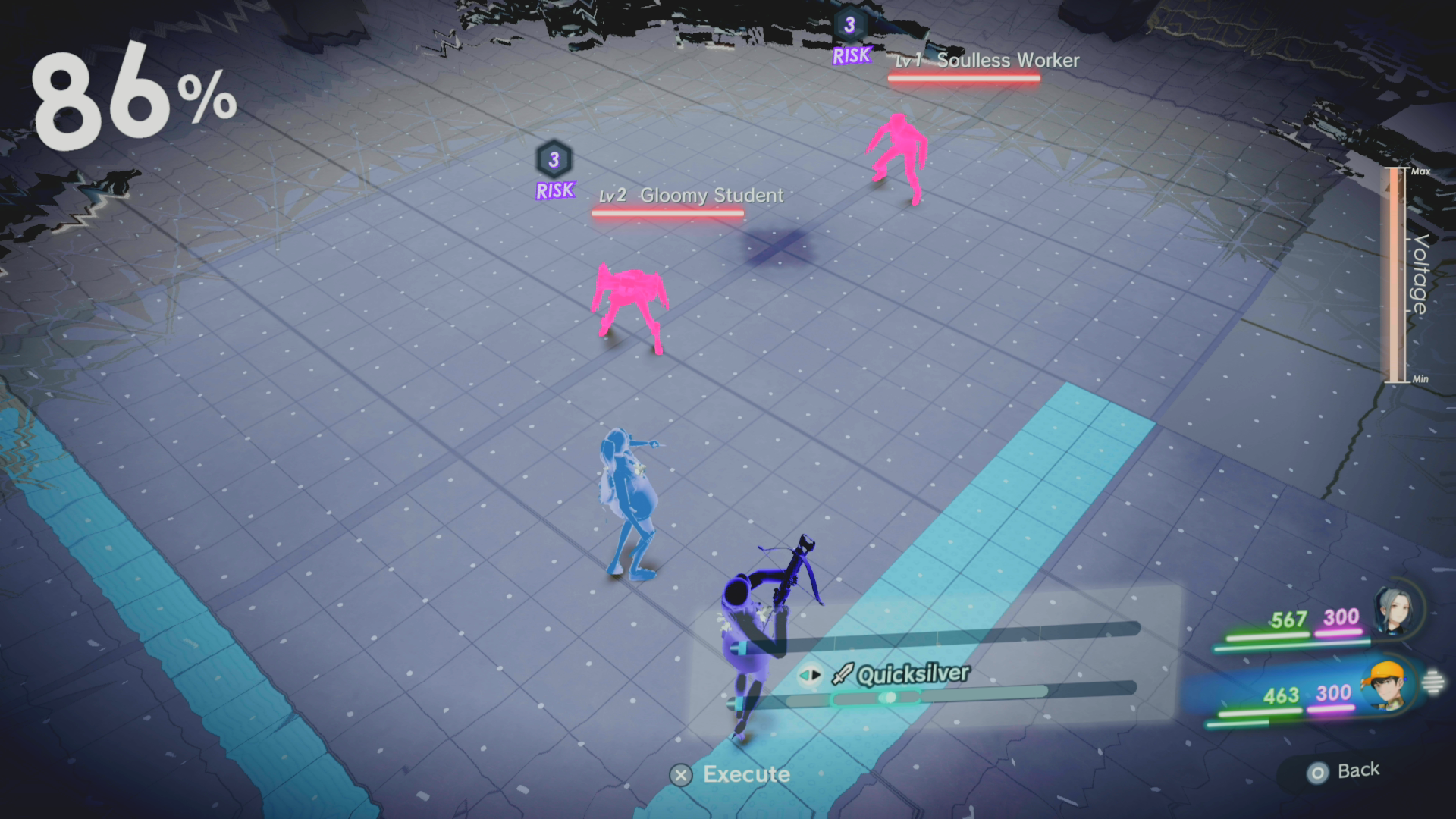 I’m just going to jump straight into it. The gameplay in The Caligula Effect 2 is quite fascinating and surprisingly unlike anything I’ve seen in a JRPG thus far. Combat is done through turn-based attacks but with a unique twist: players can see the outcomes of their stacks before executing them. This allows for significantly more strategizing than your usual JRPG. It provides knowledge on where to move, when to defend themselves, which enemy to attack, and which actions will or will not work. Though this isn’t to say that combat is any easier as enemies usually tanky and require a lot of beating to defeat and bosses can easily one-shot characters in the latter half of the game.

Players will also have to fully implement all their assets, especially the characters, to thrive in combat. Characters like Kiriko and the protagonist execute quick, full-frontal attacks, while others like Gin provide ranged support with his quick bow, which also help link combos with other characters.  Players can also take advantage of the dedicated counterattacks that come with each character, status effects like Bleed and Poison, and once a character deals enough damage, perform cinematic, ultimate attacks that deal devastating damage to most enemies. 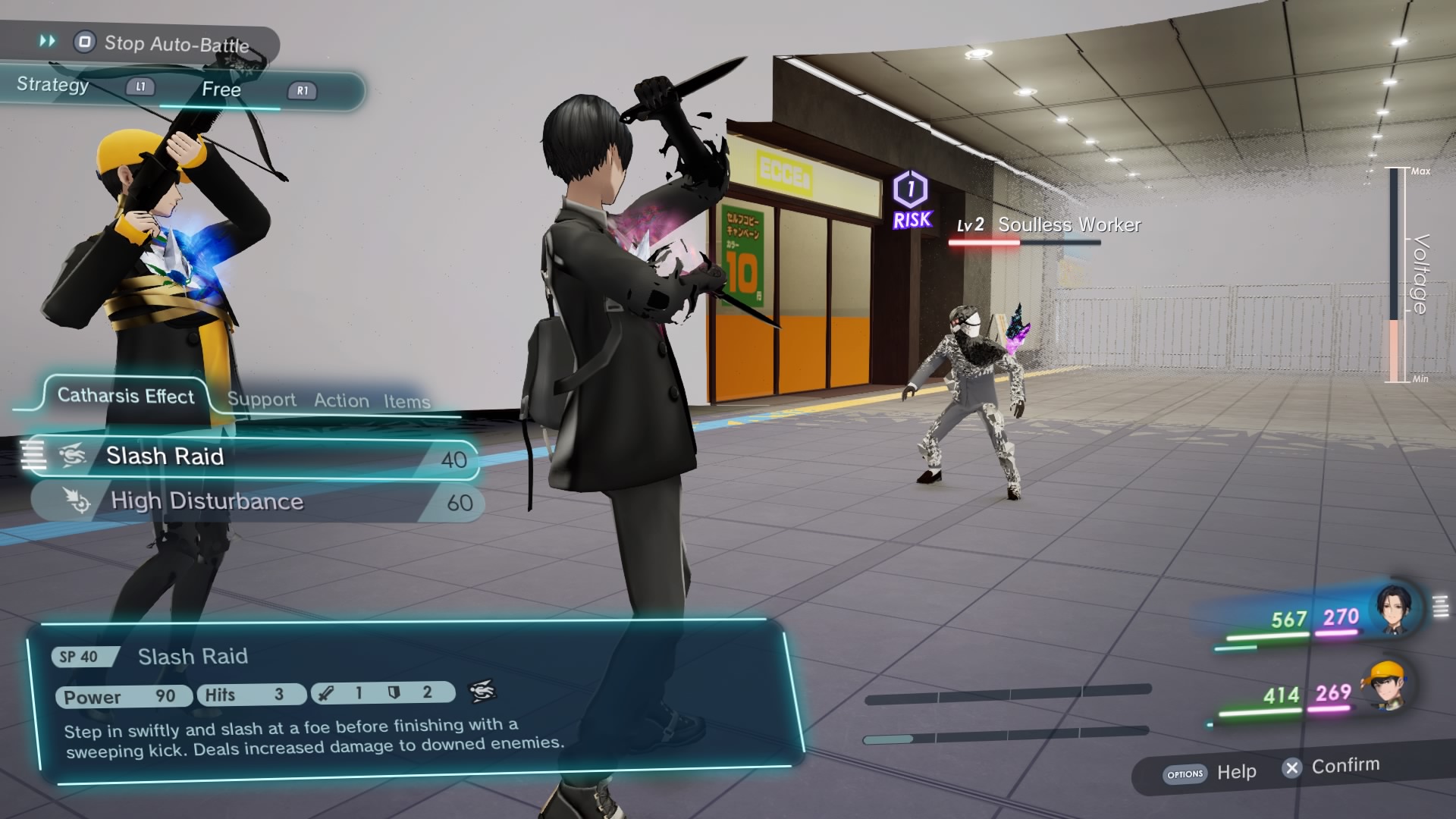 The Intricacies of Combat

But while the combat system in The Caligula Effect 2 is well crafted, for the most part, it’s most irritating aspect is how incredibly slow combat can be due to the significant delay between actions. As someone who appreciates quick combat in games, this made it difficult for me to easily understand and appreciate the mechanics at the start of the game.

Attacks and skills can also be upgraded by leveling up and using items called Stigmas and Passive Skills, which can be found around the game’s world. Stigmas increase attributes like critical rate, evasion, health, and overall Attack, among other things, and some Stigmas can also unlock Passive Skills once enough battles have been fought with it equipped. Passive Skills on the other hand, are long-term skills that basically provide the same stat boosts as Stigmas, only that they do not stack, so they’re essentially useless. 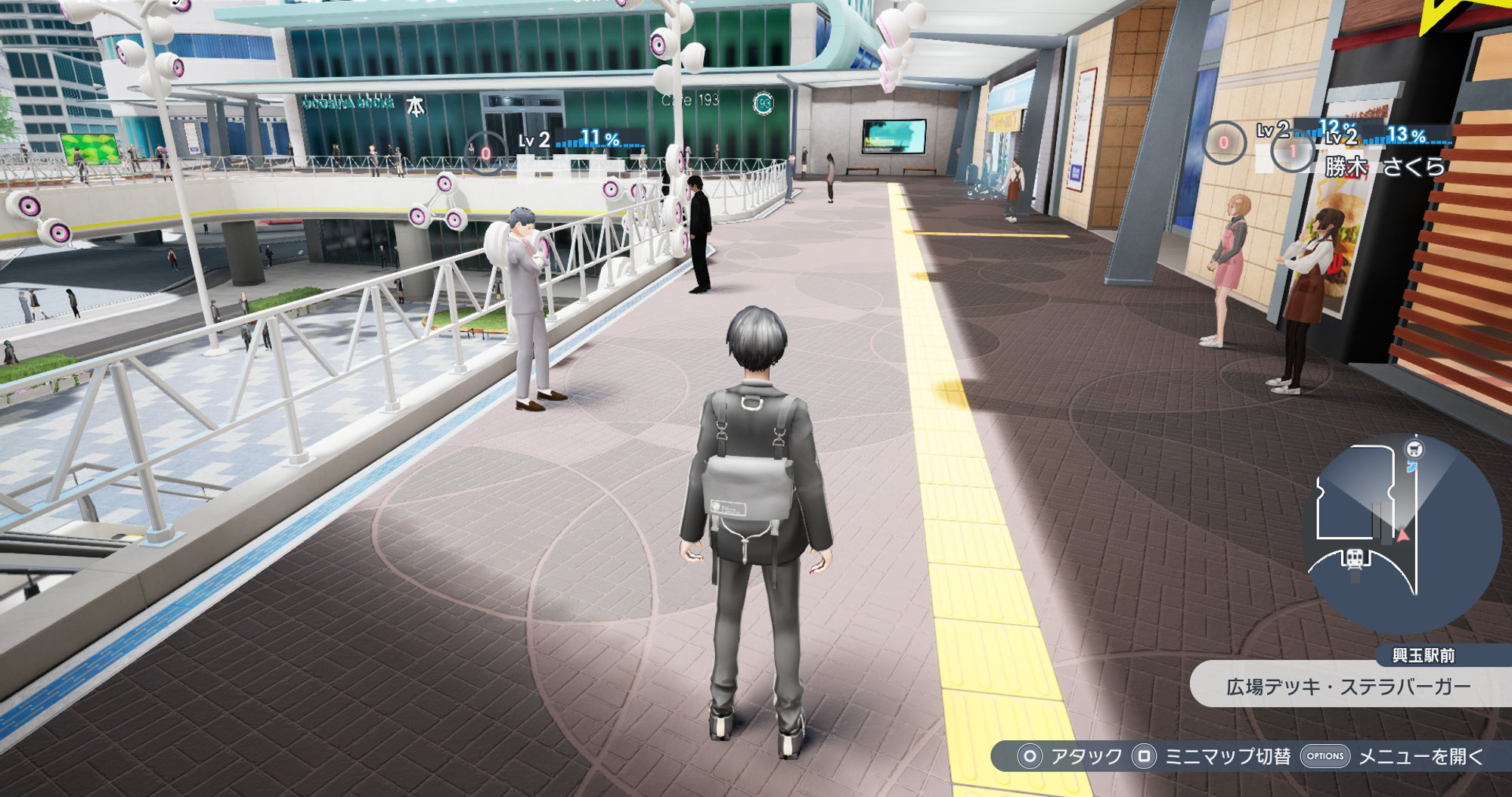 Outside combat, The Caligula Effect 2 offers players a beautifully bizarre world seen chiefly through its dungeon-like levels, each with its own theme, aesthetic, and psychedelic color pallet. These levels also provide several puzzles aside from enemies so players can feel challenged in multiple ways. And beyond these levels lie a surprisingly expanded and somewhat detailed world filled with various locations for players to explore and NPCs to talk to.

These random NPCs also provide side quests, which admittedly mainly include fetching items or finding and talking to another character. Still, the fact that most NPCs you talk to in the game have something to say and their own little snippet of story is quite impressive. Some quests also have conditions such as having a required Stigma equipped or a needed skill. Another extra feature the game provides is side stories centering on the main characters. These short visual novel-like segments play out akin to those seen in Scarlet Nexus and provide more background on the characters and their personalities.

The last feature I’d like to highlight is WIRE: An in-game messaging app that lets players have conversations with their party members along with other characters and NPCs they’ve met in their journey. Though I use the term conversations quite loosely, as these discussions are usually one-sided due to the aforementioned silent protagonist only asking the same set of questions but never really responding to their answers. More questions can also be found or unlocked as you progress the game.

All that said, while The Caligula Effect 2 gives players a lot of entertaining elements, many of them are noticeably flawed. For one, the character designs (specifically on the main character) are incredibly bland, especially to its other JRPG counterparts. Many of the character models also significantly lack detail, with the NPCs suffering the most of it.  Moreover, compared to the quality while docked, the overall graphics and resolution also take a significant hit undocked on Switch. And while the framerate is stable, I did notice a few NPCs glitching in the background, though it wasn’t frequent enough to totally break my immersion.

Lastly, while the game’s soundtrack is fantastic, only one song is played in each section of the game, so it can get old pretty quick. Luckily, players can change the music outside levels through the menu or on the jukebox in the train, (which serves as the characters’ hideout) but only when multiple songs have already been unlocked. 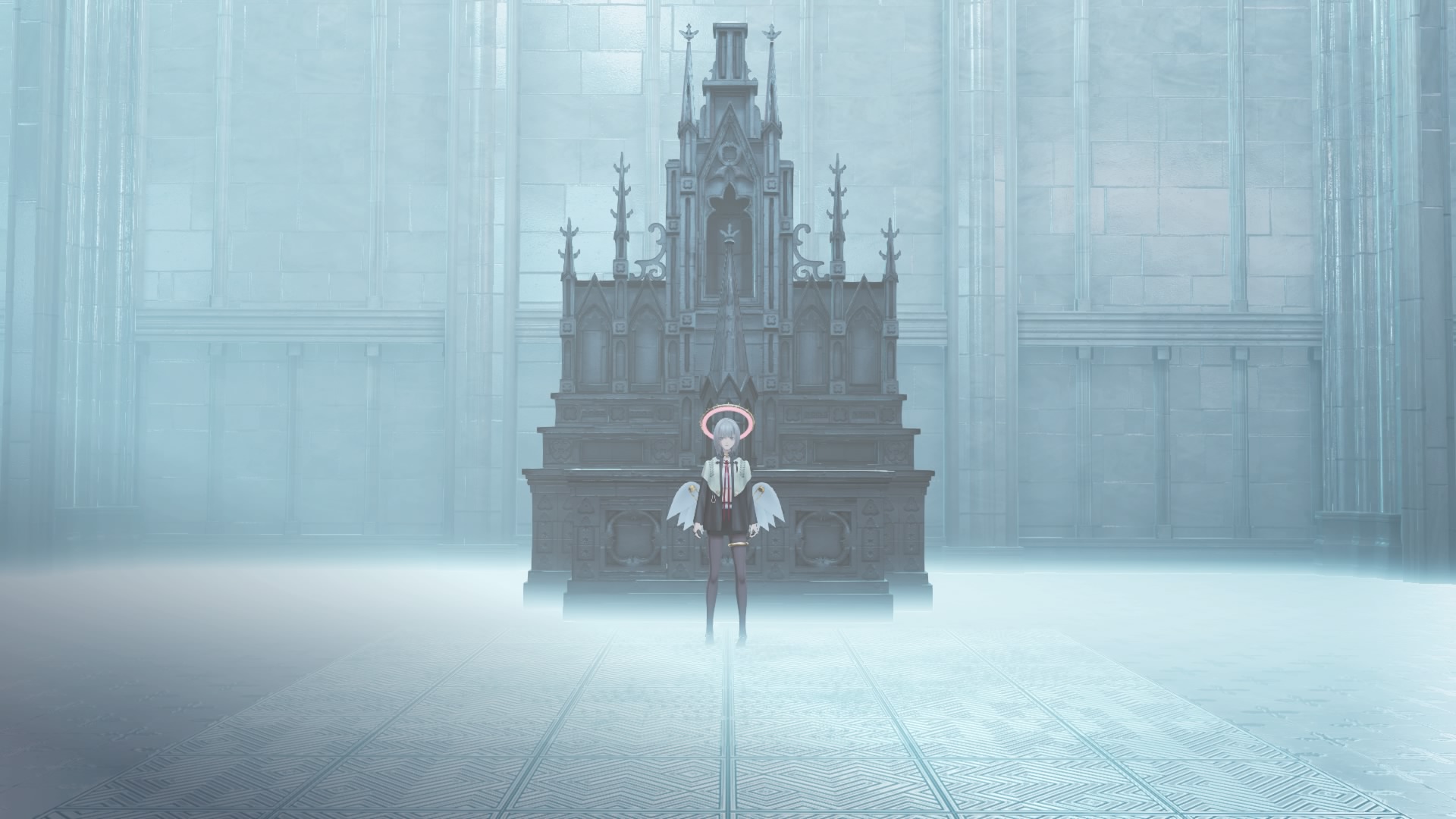 Overall despite these issues, The Caligula Effect 2 is still an entertaining game and an overall unique JRPG that succeeded in surprising me. The story is engaging, and the characters are charming and endearing. The voice acting is also great and not over the top (except for χ, who’s always over the top). As a music-themed game, it’s also no surprise the game’s soundtrack is phenomenal, albeit a bit limited. So if you’re a JRPG fan, I highly recommend The Caligula Effect 2 for a bizarre and entertaining experience.

Have you played the first Caligula Effect game? What’s the most unique JRPG you’ve played? Let us know your thoughts in the comments section below.

Despite its issues, The Caligula Effect 2 is still an entertaining game and an overall unique JRPG that succeeded in surprising me. The story is engaging, and the characters are charming and endearing.