A solid foundation that could use some work 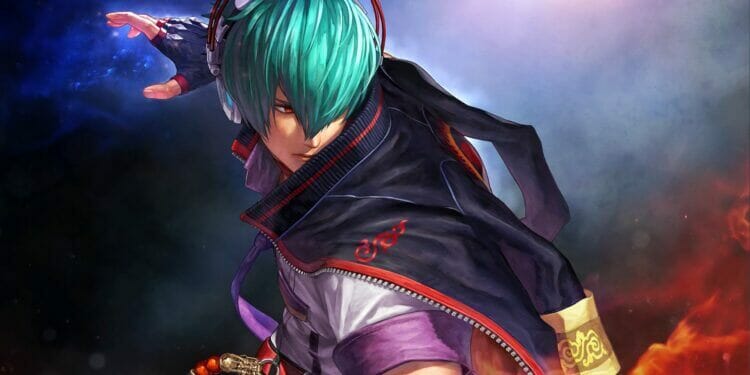 That said, the beta was over the course of this weekend, and will be wrapping up later today, as of the time of posting. We’ve played it a bunch throughout the weekend, and have some choice words for the game and what it has to offer. Welcome to BagoGames and this is our thoughts on The King of Fighters XV’s Open Beta Test. 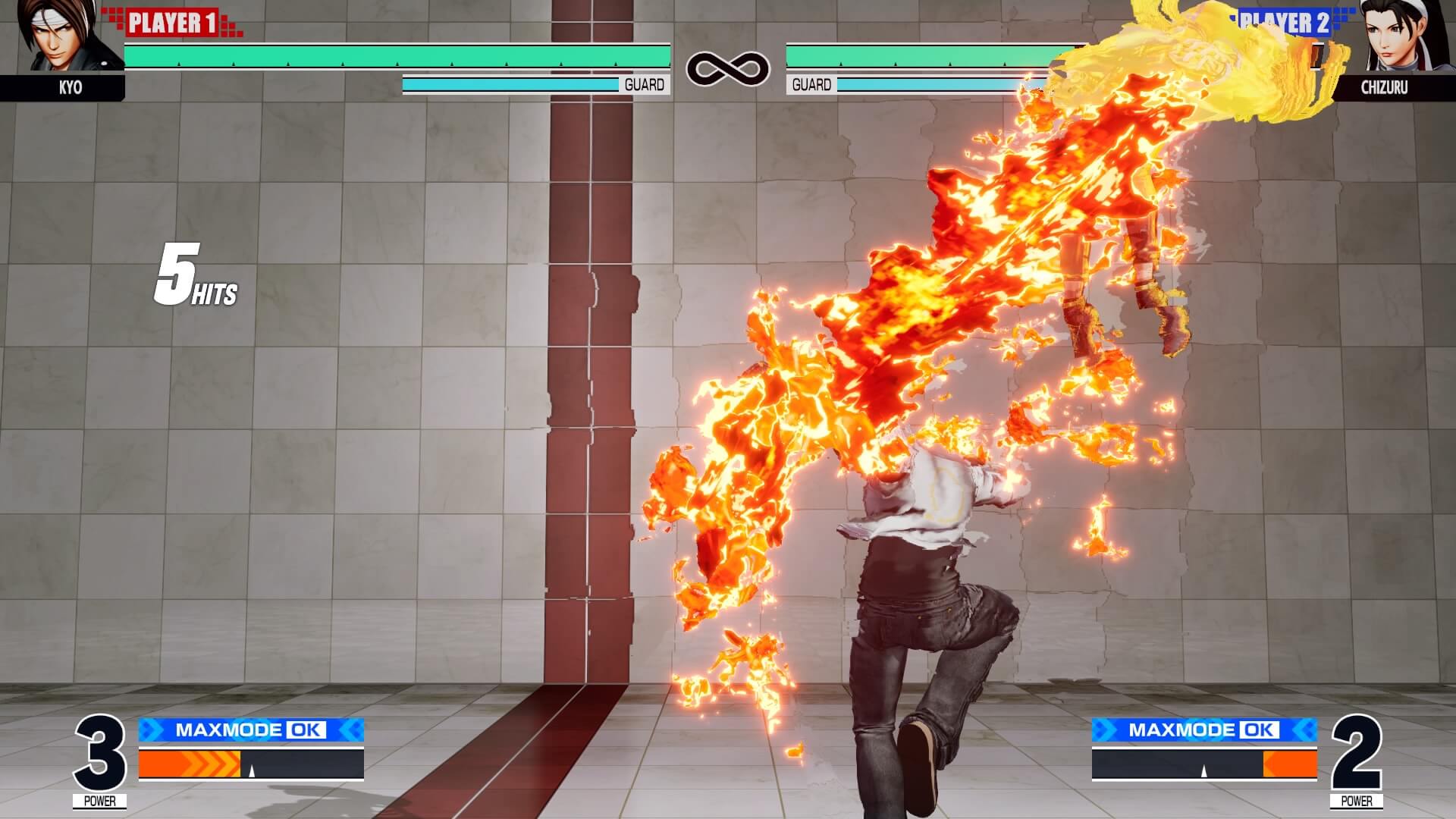 What the Game Offers You

Upon booting and accepting the privacy policy, you’re taken to the main menu, where you have access to some game modes; Local Versus, Training, Tutorial, and some online modes (room matches and unranked matches). Relatively standard stuff all around. However, there’s no Arcade Mode, but that can be forgiven seeing as how there are only eight playable characters right now.

Room Matches takes a much-appreciated feature from NetherRealm games, and that’s the ability to set yourself as AFK so it automatically skips you. A neat little touch, and not enough fighting games do it. Casual Matches are as simple as it gets; you queue in with your respective team and fight players around the world. 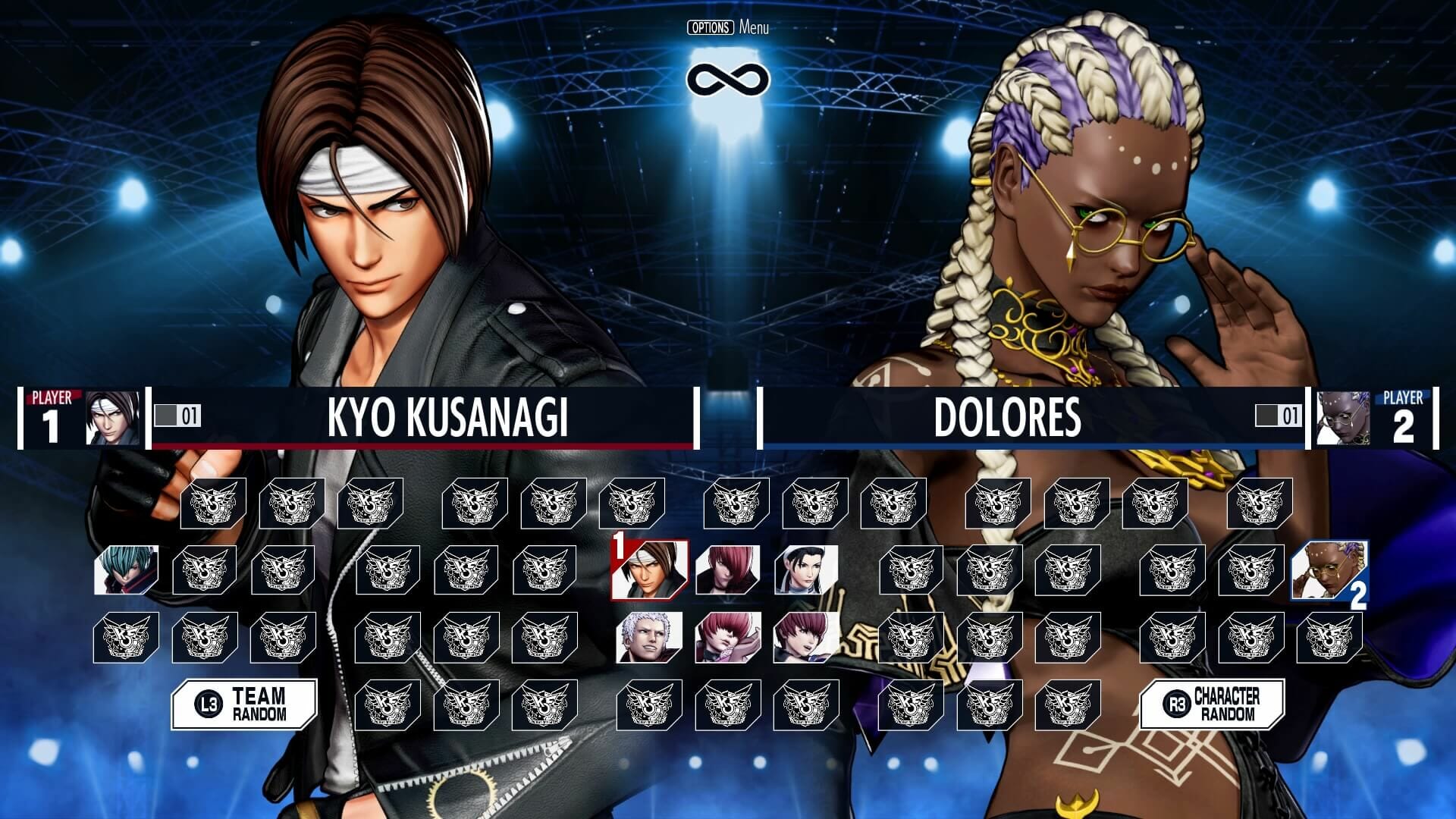 The King of Fighters XV’s Open Beta allows you access to eight characters out of the full game’s 52-character roster (17 teams of three and a single solo entry character). You have series mainstays Kyo Kusanagi and Iori Yagami returning, Shun’ei, the protagonist of the previous entry, XIV, Dolores, a brand-new character revealed relatively recently, and four legacy characters.

Shermie, of the eight playable characters, is this group’s token grappler character, using command grabs to deal lots of damage instead of doing long combos. Dolores uses more of a trap-styled gameplan, setting traps on knockdowns and juggling with them, and Kyo and Iori are easy to learn rushdown characters. Playing KOF 15 will more than likely have a style of character that you absolutely love. 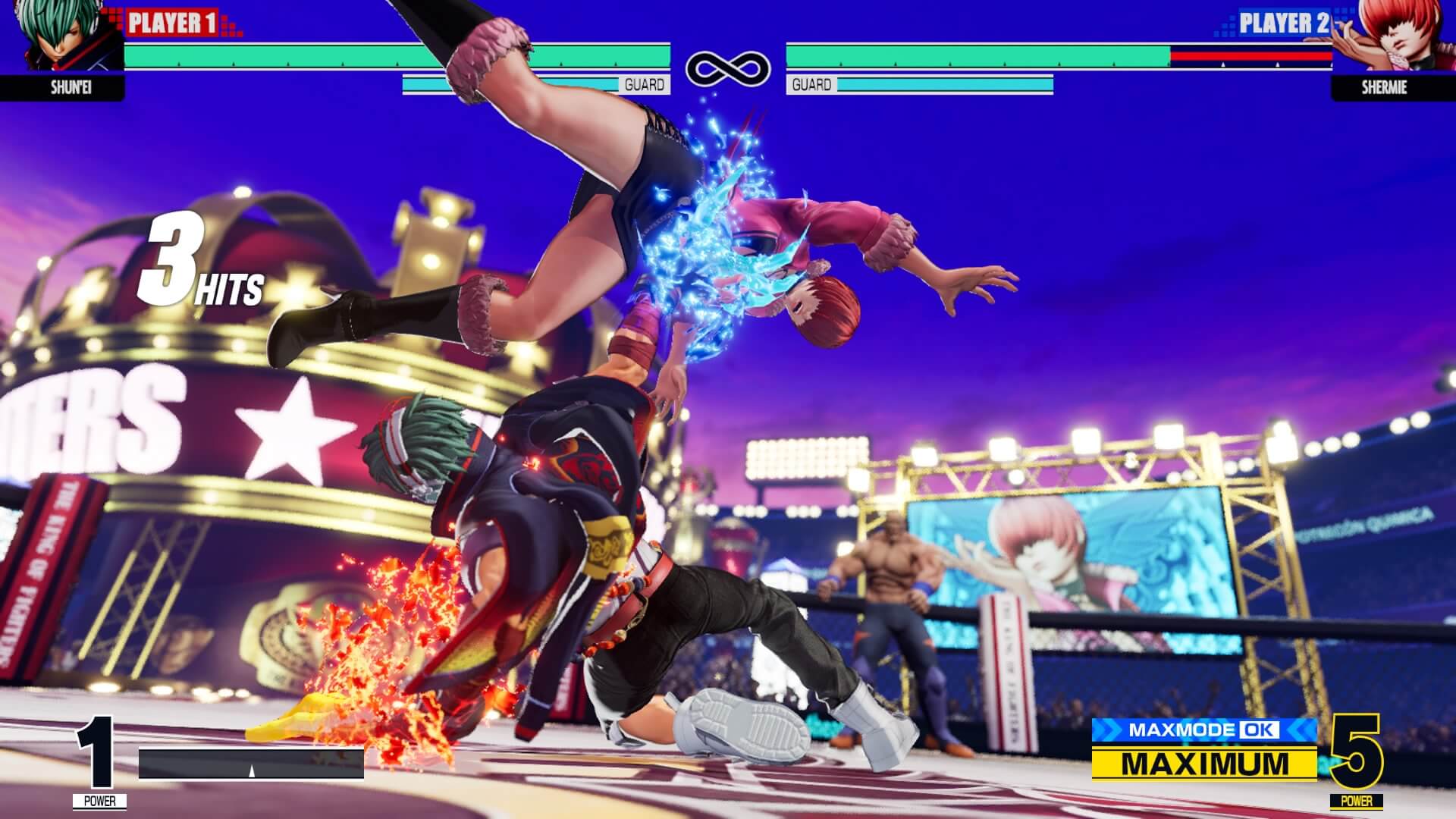 Jumping right into King of Fighters XV will probably overwhelm you if you’ve never played a fighting game before. Thankfully, the tutorial is there to assist you on that front. After finishing it, you can go right in and play the game immediately. One of the game’s biggest improvements is in general neutral.

In essence, the change is that you only have to spend half a bar to use EX special moves, a change from The King of Fighters XIV. You also can use EX moves outside of MAX Mode. The first change essentially mirrors Dragon Ball FighterZ’s Season 3 launch patch, where EX special moves got that exact change. It seems as though SNK may be taking notes from the competition, and it’s welcomed.

Max Mode from the previous game also carries into this game, but has a couple of cosmetic changes added to it. For one, it’s known as Quick Mode when activated during a combo, and secondly, it has a slowdown effect on activation, akin to activating V-Trigger in Street Fighter V. One balance change was made to it, and that MAX Mode now costs two bars instead of one.

Meter management looks to be rather key for the game’s early life cycle.

Of course, not everything is all praise and technical talk. The game has a few snags in its current state. First, and most profoundly, is the online play. KOF XV has rollback netcode within it, a change from previous SNK games using delay-based netcode. This game’s rollback, in its current state, is… workable, to say the most.

It could use a bunch of stability improvements, to be honest. Under the player two health bar, it will display the Rollback Frames, and usually, if it’s above five frames, the game can quickly change from fine to outright unplayable. There’s also no wifi indicator, to alert you to a player not using a wired connection. Granted, this is still an Open Beta, so SNK has a few months to iron this out before release.

Another gripe that’s noticeable applies more to arcade stick users. Input sensitivity is through the roof in this game, and it makes inputting some commands rather tedious to do unless you’re completely accurate. This can lead to rather frustrating misinputs, or lack of input specials, coming through, which can be very annoying. 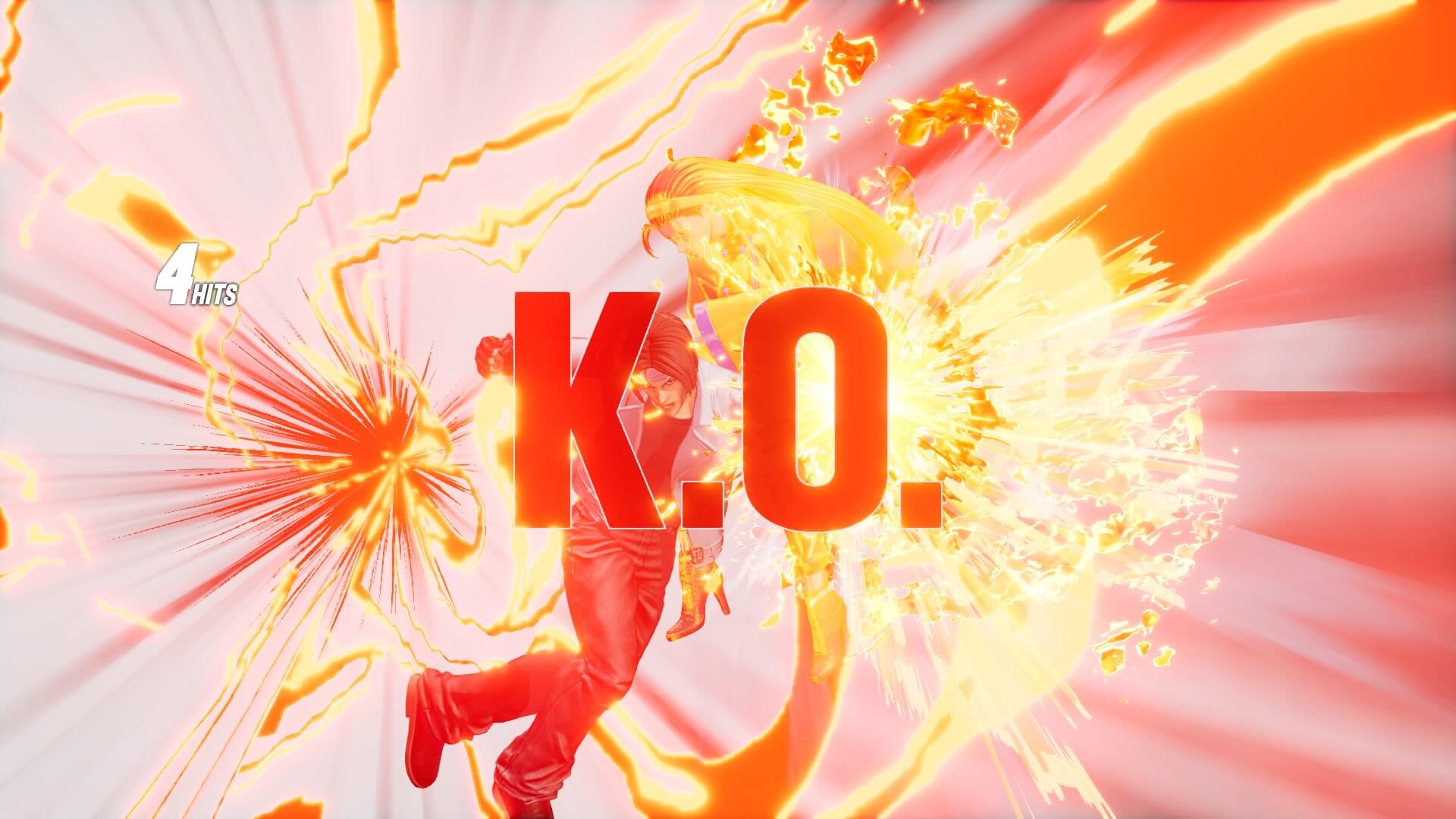 The King of Fighters XV is definitely in a far better state than I was initially expecting. It’s structurally sound, has refined and rebalanced mechanics from its older counterpart, and has variety in the characters that have been shown thus far. All of that is very promising for the upcoming February release.

However, there are some concerns regarding control sensitivity and online stability. They’re things you can work with in due time but are still concerning nonetheless. That said, one can only hope that things get better, and with how fighting games have been making the jump to rollback netcode, things can look good.

The King of Fighters XV is slated to release on February 17th, 2022 on PlayStation 4, PlayStation 5, Xbox Series X, and PC via the Windows 10 Store, Steam, and the Epic Games Store.

What did you think about the King of Fighters XV Open Beta? Did you like it? Who did you wind up playing as the most? What improvements would you like to suggest to the developers? Let us know your thoughts in the comments section below.