The Walking Dead #116 is the second part of the All Out War twelve-part story arc and Robert Kirkman hits the ground running as we start to see Rick’s plan against Negan set into motion. The issue is heavy on action and light on dialog, which gives Adlard a chance to flex his artistic muscle. Up until this point in the story, Negan has had the upper hand, but after receiving inaccurate information, he is now at a disadvantage. Kirkman has developed Negan to be a self-aware maniac: he knows he’s nuts and he’s all the better for it. Be it his Sparta-like kick, or comments about defecating one’s pants, Negan continually shines whenever he’s in the spotlight. But as always, balancing out Negan’s chaotic behavior is Rick with his no-nonsense vibe. The war between these two unstoppable forces has begun and The Walking Dead #116 shows us that Rick is not pulling any punches, as evident by his clever use of the walkers against Negan. 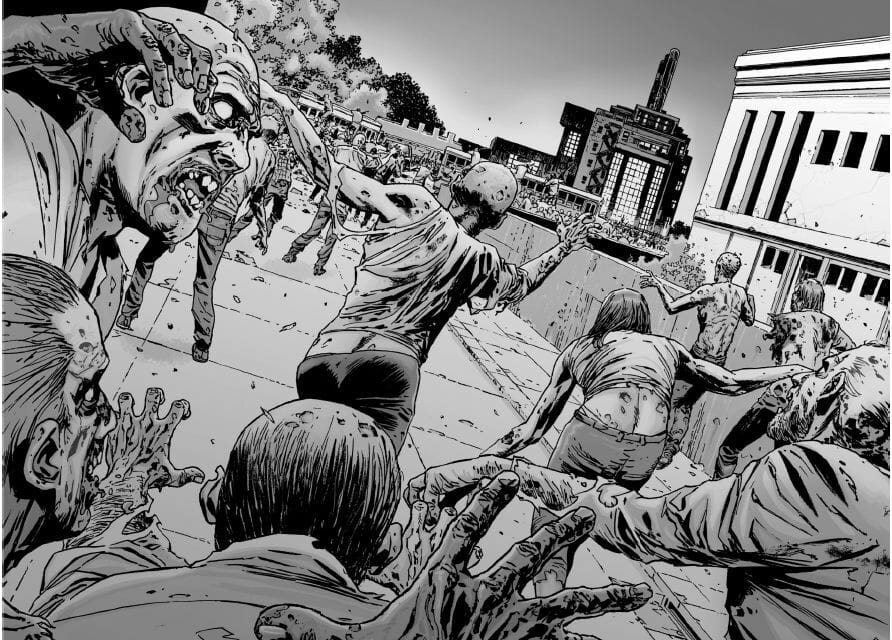 Kirkman does a good job moving the story along in this mostly action orientated issue, with TWD #116 giving us a taste of what we can expect from the rest of the All Out War arc: fast paced, concise storytelling. The dialog is efficient, a welcome change from previous issues where dialog seems to take over entire pages. Regular readers of TWD will realize that the words and actions of this issue carry more weight than usual, yet previous knowledge of the history between the characters is not necessary to enjoy the beginnings of All Out War.

Charlie Adlard’s pencils have been top notch for quite some time now, and he brings the action to life superbly in this issue. The panel layouts flow from start to finish seamlessly, with no double takes required to figure out what just happened. Adlard will be complimented by the ink of Stefano Gaudiano this entire arc, which is a very good thing as Gaudiano’s ink makes Adlard’s pencils pop off the page.

The Walking Dead #116 leaves readers anxious for what’s to come, even if a twelve part arc may sound as though it could potentially stretch the story a little thin. The release schedule is accelerated for this storyline and we’ll be getting two issues a month until its completion. Hopefully, this won’t affect the quality of the work and the remaining ten issues will be of the same high standard of the first two. All Out War is now firing on all cylinders, leaving us with the expectation of more carnage, despair, and death. Similar articles from across the web