It’s kind of funny how high school students fighting monsters from another dimension has become somewhat of a cliche in modern gaming, particularly in JRPGs. It takes quite a bit for a game to really stand out in the genre these days, and Tokyo Xanadu, from the creators of the Ys series, does its best. The action is fast paced, the relationships fly fast and loose, and of course, there’s a city to be saved by some young heroes.

The key protagonist in Tokyo Xanadu is one Kou Tokisaka, a high school student who has a decent social life, but tends to occupy his free time with working a number of part-time jobs. Kou is a resident of this particular, fantastical version of Tokyo, and lives his life like any other high school student. One day when he follows some creeps who are after a friend of his, named Asuka, Kou comes across these nefarious fiends trying to have their way with her. A gate opens up, soon to be known as an Eclipse, and it sucks,, Asuka and the other two in. Kou, of course, follows after them, only to find out that she knew all along that the Eclipse would appear, and had lured the men to their dooms. It’s a pretty rough start to the game, and probably one of the more intense moments, story-wise out of the whole game.

Kou soon finds that he has the ability to wield a Soul Device, and even though Asuka is hesitant, she starts to work with him as they fight the Greed (the name of the monsters in the alternate dimension). The game slowly builds from this beginning, and plays out in chapters. Early on, each chapter is basically focused on one of Kou’s friends that he works to enlist into his party, and eventually you will have a full party ready to adventure through a number of dungeons and fight some impressive bosses. The beginning parts of the game definitely felt a little slow due to the drawn out chapters focusing on Kou’s friends. I think that Nihon Falcom could definitely have done a better job of streamlining the earlier parts of the game, and really get the dungeon-crawling going just a bit faster.

Generally most of the days early on in Tokyo Xanadu follow the same kind of pattern. You start at school with Kou, chatting with your friends and then you can do little side quests before starting one of your part-time jobs. Later on there’s a bit less structure in the days, and there is a much bigger focus on grinding Eclipse dungeons. One interesting aspect of the game is the shards that you acquire after finishing dungeons. These allow you to do loyalty missions with the friends in your party. Usually, these side events are little mundane activities, but do allow for more insight into the relationship between Kou and his friends. However after a point in the story, these side quests become locked, and it would have been nice to see more variety and repeated missions to further enhance the friendships these kids have. While Kou is a fairly bland hero, the assorted friends that join you as well as other characters in the game are generally fantastic, and really add to the charm of the game.

So while the characters and the story are fairly typical as far as modern JRPGs go, the combat is really what excels here. Nihon Falcom are generally regarded as one of the best developers in the JRPG world, as is displayed in their Ys games, and their skill shows through in the combat and dungeons of Tokyo Xanadu. Each of the characters have their own Soul Device and weapon set up, and elemental setup. Before you do an Eclipse, the game will tell you what elements you will encounter, so you can prepare appropriately. When you’re playing, there is only one character displayed, and they have a basic attack, as well as a ranged and charged one, and you can lock on and dodge. Your party however includes three characters and you can press triangle and change characters on the fly, mid-combo even. This is where the action really shines, and the combat is incredibly satisfying; finding the best characters to use in an Eclipse is key and rewarding. While the variety of monsters isn’t that diverse, it doesn’t matter much when combat is as fun as it is in this game. Bosses also are very impressive, and some of my favorites out of any Vita RPG in recent memory.

In general, the character designs in Tokyo Xanadu are very well done. The characters, main and supporting, all have very crisp designs, and even static images of other NPCs look great. Sadly, the city itself looks fairly lifeless and bland, and wandering through the streets isn’t that exciting. Even the dungeons start to look the same after a few hours of grinding them. I understand that this is a Vita game, and maybe when the PlayStation 4 release comes out, the graphics will be updated and varied a bit, but it just gets very repetitious after a short while. The soundtrack however is great. There are a lot of really upbeat tracks and somber numbers; the right song for the right moment always seems to play, and it really helps the overall tone of the game.

At the end of the day, Tokyo Xanadu is a decent action-RPG. While the lead protagonist is nothing to write home about, the supporting cast of characters really helps to round out the story experience. The combat however really stands out, and if you are looking for a game that has one of the better combat systems on the Vita, then look no further. It’s a shame that the story is just a little too generic, especially when games like Persona do the high school students versus monsters trope better, but thankfully the combat really helps make the game stand out in a cluttered sea of Vita JRPGs.

A PlayStation Vita code for Tokyo Xanadu was provided by Aksys Games for the purpose of this review. 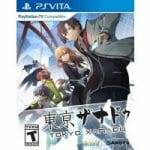