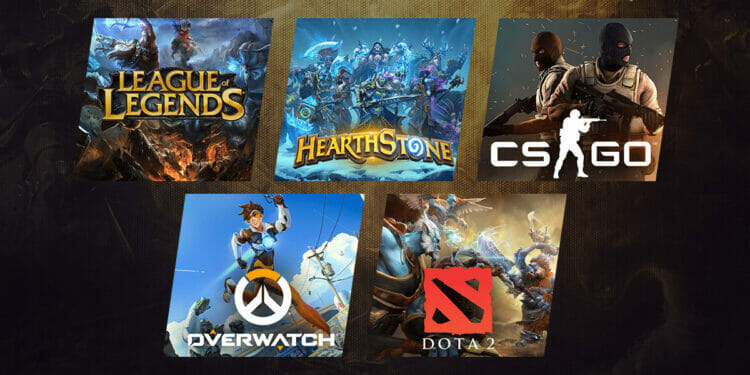 eSports is a sports competition played on computer games. eSports is a relatively new betting trend. However, many betting businesses currently offer the option of betting on events in eSport disciplines. eSport as a whole is a massive enterprise that has combined all of the benefits of ‘big’ sport with the media and scale of showbiz.

eSports is a massive industry that has swept the globe. Although it is still relatively new and undeveloped, various betting organizations have entered the market to provide the option to wager on online sports. The virtual games can be found on quantum world legends for gamers’ convenience utilizing mobile devices. The betting house has created a mobile version of its website. This online resource has been designed specifically for touch-screen devices. eSports has continued to grow in popularity across the world, including in countries like India. The best-skilled gamers fight for millions of dollars in prize money. So, what are the most popular esports titles?

The top five listed below have remained unrivaled in recent years, but the order of the titles changes regularly.

The fanfare around the launching of the Battle Royale Shooter “Fornite” has yet to go down. The game’s basic concept is simple: a total of 100 players compete against one another on a large map. The winner is the last person standing. Fortnite focuses on obtaining various materials and uniquely creating constructions. This could provide a tactical edge or cover in the struggle against other levels.

With Overwatch, the developer has effectively combined a first-person shooter and multiple online battle arenas (MOBA). In MOBAs, the game is similar to a shooter from a first-person perspective. You can choose from various characters for diverse positions, each with its weapons and four unique skills. This allows you to outsmart your opponents and bring them to their knees using your abilities.

League of Legends is a real-time strategy game that features two teams competing against one another on a standard MOBA map. Each unit comprises five characters, for a total of over 150, who are assigned to one of the five potential roles: Topple, Midlane (carry), Attack Damage Carry (ADC), Support, and Jungler.

Every playable champion has four different abilities, and surviving requires various strategies. The participants compete in their respective roles against the opponent team’s exact functions. The primary purpose is to gain an advantage over the enemy by eliminating objectives as a group, allowing you to penetrate their base and destroy their nexus.

League of Legends’ most essential aspects:

Riot Games is the studio.

Dota 2 follows the same gameplay as League of Legends and is played on a MOBA map in a five-on-five format. Dota 2 impresses its appealing aesthetics and is more tactical than mechanical action.

The game is precisely as varied as its predecessor, with over 110 distinct heroes to choose from and five different playable roles. Dota 2 has been among the most popular esports games among professional players.

Two teams of five players compete as terrorists and anti-terrorists in this classic game mode of the strategic first-person shooter counter-strike: global offensive (CS: GO). Unlike most other shooters, a slain player in the middle of the action is not automatically resurrected. Those that are dead can only help their squad in the following round. Those killed can only keep their team in the competition for the next game.

eSports is a relatively new field, but it is clear that a lot of work has gone into it from a betting standpoint. As a result, there are more betting tactics every day. When looking to play different games click to visit the latest gambling casino games.

Every bettor wishes to have a betting strategy to place winning bets consistently. Even the most exact and reliable mechanism is susceptible to failure and mathematical errors. As a result, while none of the tactics guarantee a 100 percent win, a competent approach might help you get the best possible results.

Multi bets are always risky because the bettor must win all of the events on their betting slip to win. On the other hand, users are drawn to the greater odds, which allow them to win the jackpot with just a few solid hits. There are two types of eSports betting techniques available: safe and risky. Both are profitable, and you can choose the best one for you based on your objectives. Parimatch is a legal betting organization that offers bets on a wide range of sports, including esports and virtual sports. You can bet before or during a match on Parimatch (in-play).

How To Be A Better Gamer As An Adult

What Are The Top 5 eSports games today? Lexicopedia

What Are The High 5 ESports Video Games At Present? | Finasteride Win

What Are The Top 5 eSports games today? - Gaming News 24