Can the prospect of a bad remake be scarier than Nemesis? 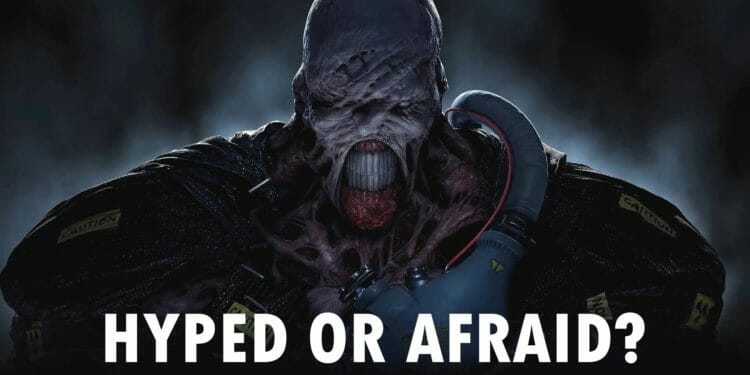 You know, there was a time (or a couple) when Capcom was hated by everyone, especially by their fans. At some points in the last decade or so they were nearly on the same level as Konami. Okay not that bad but still in the bad books for many. But now they’re on a roll and an impressive one at that.

So, Capcom is continuing with their trail of success with yet another remake, this time it’s Resident Evil 3. Hang on there, continuing success? How do we even know this will be as good as their massive hit that was Resident Evil 2 Remake? Well, it has to be right? Well actually there might be a few things that have got me on edge and just a tinny, tiny bit worried about how this may come out.

Not enough time to correct any mistakes from Resident Evil 2 Remake?

Bosses were a problem

Now, most developers will listen to their fans and follow the advice on how to improve their next game or sequel. You release a product; you listen to what works and what doesn’t; and make amendments if needed. With Resident Evil 2 Remake, it was a critical darling and did very little wrong. But what it did wrong seemed to stick with people the most.

Boss battles were a huge complaint in RE2 Remake – personally, I thought they were fine but there were some valid points. Bosses ended up being just bullet sponges with very little else happening to the event more interesting.

Critics would just express their dislike at these encounters being a run and gun situation with very little creativity and flexibility. Bosses can be tough to get right and as gaming evolves, bosses need to evolve. Hell, the MGS series nails most of their bosses, even back on the PSone. They were clever, inventive and allowed players to use certain elements to gain an advantage. Resident Evil ends up shooting the big monster, runs from big monster and repeats until the big monster is dead. Nothing wrong with that but after half a dozen times it does get old.

Outdoor areas were also rubbish in RE2

Another complaint was that the outdoor areas were rubbish. Yep, too many including those chaps at Rock, Paper, Shotgun, and Watch Culture, the main area of criticism was the outdoor areas. Personally what I have to say is yeah, they were really rubbish. The flow of the path seemed unnatural and far too linear. It looked like a cluster of random areas mashed together, offering very little in interesting events and the sizing was all wrong. Look at the basketball court to see what I mean. It just looks way off.

While Capcom nailed the interior areas so well, they lacked any kind of understanding as to how to make the outside world flow naturally or in an interesting manner. Now Resident Evil 3, the original, had a decent world design. Sure, it felt a little restrictive but it was still designed to look and feel like a once living and breathing city now tarnished by the undead.

There were alleys, side streets, high streets, garages, restaurants and more to explore. Random events would happen to make the world feel organic and responsive to players while making sure there were enough undead and set pieces to make the journey memorable. I still remember the alley leading to the RPD, filled with zombies and a single explosive barrel.

What can Capcom do to fix it?

As long as the developers have put in enough locations and some streets that interconnect with one another, then we’ll be fine. As for the bosses, well we have Nemesis and he is a true force of nature to be reckoned with. A hunter that is extremely dynamic, following the player and popping up at random will make his encounter tense and compelling each time.

Making it a true and terrifying threat but also giving a possibility of different encounters with different resolutions. In the original, there were moments he would pop out of nowhere in the street, other times it’d be in a confined place like a newspaper office and then he’d be purged on top of a building firing rockets at you. He had variety and hopefully, that will be the same in the remake but bigger and better.

Nemesis’ redesign is a little on the nose?

So the new look for Nemesis has divided people. Many complimenting the excessive look with the skin and big teeth while others have commented on …. the nose. When I first saw him I personally was hoping for something a little more sinister-looking, grosser and fleshier. The staples on his face look random and don’t match up to any joins which I found weird. It is way too safe in the grand scheme of things and the developers could’ve pushed the body horror aspects a little more.

But the more I see him in recent trailers and screenshots, I’m kind of digging the design overall. He looks the part, imposing, creepy and above all, he looks like a mangled science experiment gone wrong. Also, his transformations could be absolutely killer and the progressing stages may truly horrify us. Look at William Berkin in RE2 Remake, he looked great during his transformation.

I still believe it is an ultra-safe design for the Remake but he does look pretty good. His torn up suit, mashed-up face make Nemesis feel like a true monster. In some way, he feels like the backup guy, the one they’ve literally smashed together and looked like he could fail easily and Mr. X (from Resident Evil 2) is more professional looking. A neat idea if it turns out Nemesis is the ultimate hunter and even confronts Mr. X (more on that later).

Plus Nemesis is like a bigger and faster version of Mr. X.

So yeah, Mr. X in the RE2 Remake had some mixed feelings. Again, people weren’t too happy that he just got back up and followed you relentlessly. Now I love a good chase but leaving him in one section of the building and finding him in the other a minute or so later was complete BS.

Plus, only 30 seconds will he stay down? Takes like 4 years to move those dam bookcases in the library? I hope Nemesis will retreat or stay down for longer otherwise he might be a little too much to handle, especially if you have to do puzzles and other stuff in the open.

What the f***? No, no, no. All wrong Capcom. Please don’t give us Project Resistance instead. Okay, so, Project Resistance looks fine and as a four-player co-op I believe it will serve its purpose and even be good. But why didn’t you remake Mercenaries mode? Why!? That is the biggest insult so far with this Remake. Such as total f*** up if you ask me.

Capcom seems to be setting everything in stone now and cementing the past with cannon fashion. Now from the Resident Evil 2 Remake, we know that Leon and Ada kissing is now cannon in the story among a few other things. This is great to make certain events staples of the lore. But could this sense of making certain story things cannon actually ruin a really cool dynamic in the Resident Evil 3 Remake? In the original, at certain points, you’ll be given two choices and what follows will alter the path slightly.

Now to be fair the choices could still be there but maybe just be less signposted and just flow like nature gameplay. So you could see two paths and taking one will lead to a new area and the other closes forever. This is fine and hopefully, they’ll still have multiple choices in some way or the other.

It has been confirmed there will only have one ending, which is fine. The original Resident Evil 3 had two or three endings technically but they were all pretty much the same with just one aspect being changed. My guess, *SPOLIERS* Barry will turn up at the end and this is fine to be cannon. Overall it’s all about the journey and multiple choices will result in repeat playthroughs despite there being only “one ending” now.

Okay, what I want!

I also want an “Easy mode” which offers an insane amount of weapons and plenty of resources, just so you can go all out like in the original.

So I’m looking forward to the Resident Evil 3 Remake as RE2 Remake while having a couple of big flaws was still an excellent game. But I’m in that camp where I think this sequel is coming a little too soon after the success of Resident Evil 2. I wanted Capcom to listen to feedback and have enough time to re-adjust, fine-tune or make sure the same problems didn’t pop up again.

Thus, creating the ultimate Remake and finally proving that remakes can be great. There are some areas of concern but I think the goodwill outweighs the bad. Unless the bad is so bad that it just ruins the entire game and ends up being “fine” rather than great. Maybe Capcom had time to listen to feedback and make some adjustments? We’ll see.