A clever and cunning picture about 1988, childhood, and Nintendo 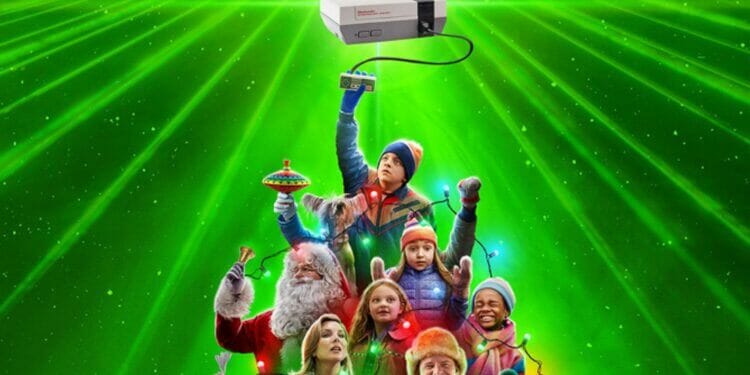 What did you want most for Christmas? The question varies depending on the age of the person you’re asking. If you were to ask a 30-something of the 1980s, they’d probably mention a cowboy outfit or GI Joes.

But ask an elder millennial of today and they’d probably say Nintendo. It was everywhere and hard to ignore as the top Christmas gift of the late 1980s. That is the premise for 8-Bit Christmas, what will no doubt be referred to as the updated version of A Christmas Story.

The framing device takes place in the present day. Neil Patrick Harris plays Jake, a dad with a kid he’s trying to entertain on Christmas. He takes his daughter to his childhood home and tries to get her to play his old Nintendo Entertainment System.

The topic soon shifts to how Jake got the NES. So we’ve got a Princess Bride story on our hands with a storyteller setting the mood. It’s 1988 and the one thing a young Jake (Winslow Fegley) wants is Nintendo more than anything in the world.

The Madness of Suburbia

Set in a suburb of Chicago, Jake occupies a strange but relatable neighborhood. His father is a clumsy carpenter and his mother is an overworked teacher. His sister is obsessed with Cabbage Patch Dolls as much he fantasizes about Nintendo.

Jake has a number of quirky friends. One is allergic to pasta while another is a consistent liar and gossip slinger. One is an expert businesswoman when it comes to money management while another is just a good old pal.

But then there’s the neighborhood rich kid of Timmy. Timmy is the most popular kid on the block specifically because he owns an NES. Due to such status, Timmy gets to call the shots on who can come over to his place and be given the chance to play.

Not content with bowing down to the whims of Timmy, Jake intends to get an NES for Christmas. He tries his parents but they’re little help. In fact, they prove to be active against this dream when video addiction hysteria grips the town.

His strategies then turn to some strange places. He goes along with the Boy Scout challenge of selling wreaths for a chance to win the NES. He also explores black market options with a questionable seller played by David Cross.

The story eventually reaches the point where Jake is convinced the only way to get an NES is to pull off a heist. Well, sort of. Without giving too much away, his plan involves the mall, baseball cards, a phone scam, and puke.

The narration by NPH has some relatable and charming gags. One of the best bits features Timmy being revered by the neighborhood for being the first to own the Power Glove. The older Jake then tells the story of how Timmy failed to use the glove well as he bluntly states “the Power Glove sucked.”

Not all the gags work as well. There are references to RoboCop and Russian spies that are delivered as duds. The jokes are true to the era but they stick out like sore thumbs in a script that mostly parodies the era well.

Jake and company are a lot of fun considering they don’t just feel like 1980s ciphers. There’s some genuine chemistry between them. The fact that there’s some real comradery that pops through the tightly written dialogue is quite astounding.

It’s surprising how this film slowly diverges from the consumerism craze to be more about people than consoles. Jake’s relationship with his family only grows by the time Christmas rolls around. There’s not even a cheap out for this story where there’s a brutal honestly amid all heartfelt reflections on the past.

After all the NES dreams and slapstick laughs, it’s rather sweet that such a film takes a warm route for the ending. I won’t give too much away but the rose-colored glasses do come off. There’s a powerful realization about what’s more important than a Nintendo for Christmas.

What I love so much about this climax is that it doesn’t try to make it so the young Jake fully learns a lesson. Rather, it’s the older Jake who gains a sense of meaningful reflection on the times that matter most. It’s an obvious route to take for a picture where it’s more about the journey than the goal.

From this angle, the film is beautifully touching. It taps into those early days of Nintendo and satirizes that childlike obsession with great glee. But it also manages to showcase how the passage of time makes those memories all the fonder.

8-Bit Christmas may hold the most appeal for elder millennials but I’m willing to bet Gen Z will get something out of it as well. In the same way that A Christmas Story has remained classic crossing generations, this picture may be destined for such status. Nintendo certainly was our generation’s Red Ryder BB Gun.

This picture was a tough sell considering the 80s retro allure is everywhere now. Thankfully, this Christmas comedy narrowly avoids just being a mere name-dropping nostalgia bomb and becomes something far more compelling. Maybe I’m blinded by nostalgia but there’s a sweetness to such a picture that makes me dig it all the more.

Did you see 8-Bit Christmas on HBO Max? What did you think of the movie? Was it a nostalgic throwback or rotten roast of the retro? How does the film stack up against Ghostbusters: Afterlife? Let us know in the comments below.

A nostalgic trip with a surprising heart for a story about wanting an NES for X-Mas.