A few weeks ago I reviewed Rodea The Sky Soldier for the Nintendo 3DS. Despite its problems, I could spot a nice game hidden behind the portable mess. After reviewing the game, I could not help but wonder how much better the Wii U or Wii versions could be, so I got excited to get the opportunity to also review the former as well.

The story of the Wii U version of Rodea The Sky Soldier is exactly the same as in the 3DS version. You still play as Rodea The Robot, who has to stop the evil Naga Empire from conquering Garuda. Ion the mechanic finds Rodea in Garuda, 1000 years after he has been sent there by princess Cecilia. All of this is to make sure that the Naga Empire cannot get their hands on the key of time. I kind of like the story in Rodea The Sky Soldier, so I am happy that it is the same in the Wii U version. The humor and simple characters were one of the strongest points when I played it on the 3DS, so it is nice to see that it stays the same between both versions of the game. The characters and premise are still simple, however, so if you like more advanced plots, this setup might be too simple minded for you.

One of the most important improvements in the Wii U version of Rodea The Sky Soldier is the frame rate; The game is much more stable than its 3DS counterpart. The frame rate manages to hold up most of the time, but with some unfortunate dips here and there. It is still mind boggling, however, that the frame rate drops at all, since the game honestly do not look that much better on the Wii U. Rodea and friends, as well as enemies, all look smoother, but the environments still has some questionable textures with some drab colors.

Rodea can still run and fly in all directions. On paper this is an awesome idea, but it still does not work as intended in the Wii U version. The homing attack still misses its target at times, and the camera is still very difficult to control. These problems do not show their ugly mug as frequently as in the 3DS version, but they still occur often enough to be a headache. When it all works, however, the action still feels fast paced and fun. It is just a shame how troublesome it is trying to aim the camera anywhere, whether you want to attack an enemy or simply want to fly towards the next landmass in the sky. It helps a bit that you can control the camera with the gamepad’s right analog stick, but this is not precise enough to work well in moments that contain a lot of action.

There’s still a lot to do if you want to collect everything in the game, as you can explore each stage freely. It’s pretty satisfying finding a secret coin that was hidden on an island off in the distance. I can easily picture a Wii mote in my hand solving some of the control issues that the game has, so why Rodea The Sky Soldier doesn’t support the controller it was made for in the first place is beyond me. It’s nice — and helpful — to have it run on a bigger screen, however, since it is easier to use the mini-map to locate enemies. The HUD is still very discrete, giving only the information that you need, such as health and your currently equipped weapon.

Rodea The Sky Soldier for Wii U is a slightly better version of the game compared to the 3DS version. The controls work a bit better, the graphics look a bit better, and the game has tolerable frame rates. As I have mention earlier, the action is fun when it works, especially the boss battles; And while it all does work better on the Wii U, it still does not work well enough. It feels like a less shoddy port, but a port nonetheless. In the end, I personally had a better time with Rodea The Sky Soldier on the Wii U than I had on the 3DS, even if the game’s faults are hard to ignore at times. I really wanted it to be better in the end and after playing both main versions of the game, I am left with an urge to try the Wii version just to see if the original product is better than the ports. However, if you only have the 3DS or the Wii U version to choose from, the latter is the one to get. It works a bit better and still gives you the charming storyline about Rodea The Robot and friends. 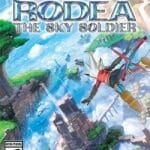