Rodea The Sky Soldier had a crazy development cycle. Yuji Naka finished his new game back in 2011, but for some reason Kadokawa Games did not localize it. Time has since passed, and the game has finally seen a release on three Nintendo platforms: The Wii U, Wii, and 3DS. I decided to try out the 3DS version, as I was curious to see how the game holds up on a portable console.

Rodea The Sky Soldier is about a robot, aptly named Rodea, and his struggles to save the floating kingdom of Garuda from the Naga Empire. When the story begins, we witness the Naga Empire attacking Garuda. A princess by the name of Cecilia is trying to flee to Garuda alongside Rodea, with an artifact called the Key of Time that the Naga Empire wants. Things go wrong, Cecilia teleports Rodea to Garuda with one half of the Key to stop the invasion, and 1000 years later Rodea is awoken by Ion the mechanic. Even though the base story setup is as simple as it gets, the story and characters in the game are one of its stronger points. I personally enjoyed the character design, and some of the more RPG-ish humor that the game sports is pretty fun. It does not reinvent storytelling in any way, but this is one of those games that works well with sticking to what’s already known, story-wise.

Right after Ion meets Rodea, the first level starts. As I took my first baby steps as Rodea the robot, the first thing I noticed was the horrible framerate. It does not matter if you play with 3D on or off, the 3DS version of Rodea The Sky Soldier has framerate issues from start to finish. This really poses a problem, since it makes it harder to time and pull off the moves that each level in the game demands from the player. The second thing I notice is that the graphics look bad on the 3DS. Textures look drab and stretched, and the character models resemble something I would see in an early PS2 title but with better animations. I am not a graphics nerd, however, and I have nothing against older looking games, so I could have accepted that the game holds back in this area if the frame rate issues were not constantly present.

Rodea can run and fly in all directions in the game’s many stages. He also has a homing attack at his disposal that feels really satisfying to use — When it works. All too often does this goes wrong, however, as the game will select a target further from the closest target, or it makes Rodea go past his target if you start attacking too close to them. This is a huge problem, since the player has very little control over the camera angles. The action in Rodea The Sky Soldier is fast and furious, and as long as the camera stays behind Rodea, it all works fine. More often than not, however, I found that the camera points in one direction while I want to go in another. This holds true even when I used the game’s lock-on targeting mechanic. It does not help that the camera also points down towards the ground ever so slightly when you stand still. You can turn on gyro controls while airborne, but that does not work well either, since the camera in the game never feels truly analog. Had these problems not existed, the action would have felt pretty nice, but as things are now, it all feels clunky.

One would think that the mini-map would help you keep track of enemies and such when the camera is of the mark, but as the action is often very fast, keeping track of the small dots on the map while navigating through the air becomes difficult. Other then that, the HUD shows information such as energy and lives without being too intrusive. You can also use the lower screen of the 3DS to decide which weapon to equip by tapping the corresponding icons. This is nice, as it keeps the main screen unoccupied with unnecessary weapon icons and such.

When Rodea The Sky Soldier’s controls and camera work, it is really fun to smash enemies and explore the world. It is just too bad that the game is plagued by frame rate issues and bad controls that make Rodea feel stale as well as uncontrollable. The bad graphics are not even comparable to the Wii and Wii-U versions, and it is painfully obvious that it was not meant to exist on the Nintendo 3DS from the beginning. I do see a good game hidden beneath this port’s shoddy surface, however, and I can easily imagine that the it plays better with a Wii-mote in hand. So, I might try the other versions of the game to find out how they hold up, and I would give the same advice to anyone that wants to give Rodea The Sky Soldier a go. 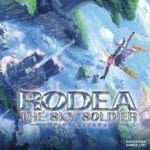 […] few weeks ago I reviewed Rodea The Sky Soldier for the Nintendo 3DS. Despite its problems, I could spot a nice game hidden behind the portable […]