A Tentacle for Your Thoughts – Carrion Review

Now you're the one that goes bump in the night!

“Reverse Horror” is a genre that seems to have become a little more popular these days.  The idea of playing the bad guy and hunting people down has grown from games like Aliens vs Predator to a variety of other titles with similar designs. Carrion takes this concept quite literally with you playing a tentacle-covered monster pulled straight from classic horror fiction.  However, does this single-player Metroidvania-style experience hold up beyond the cool concept? 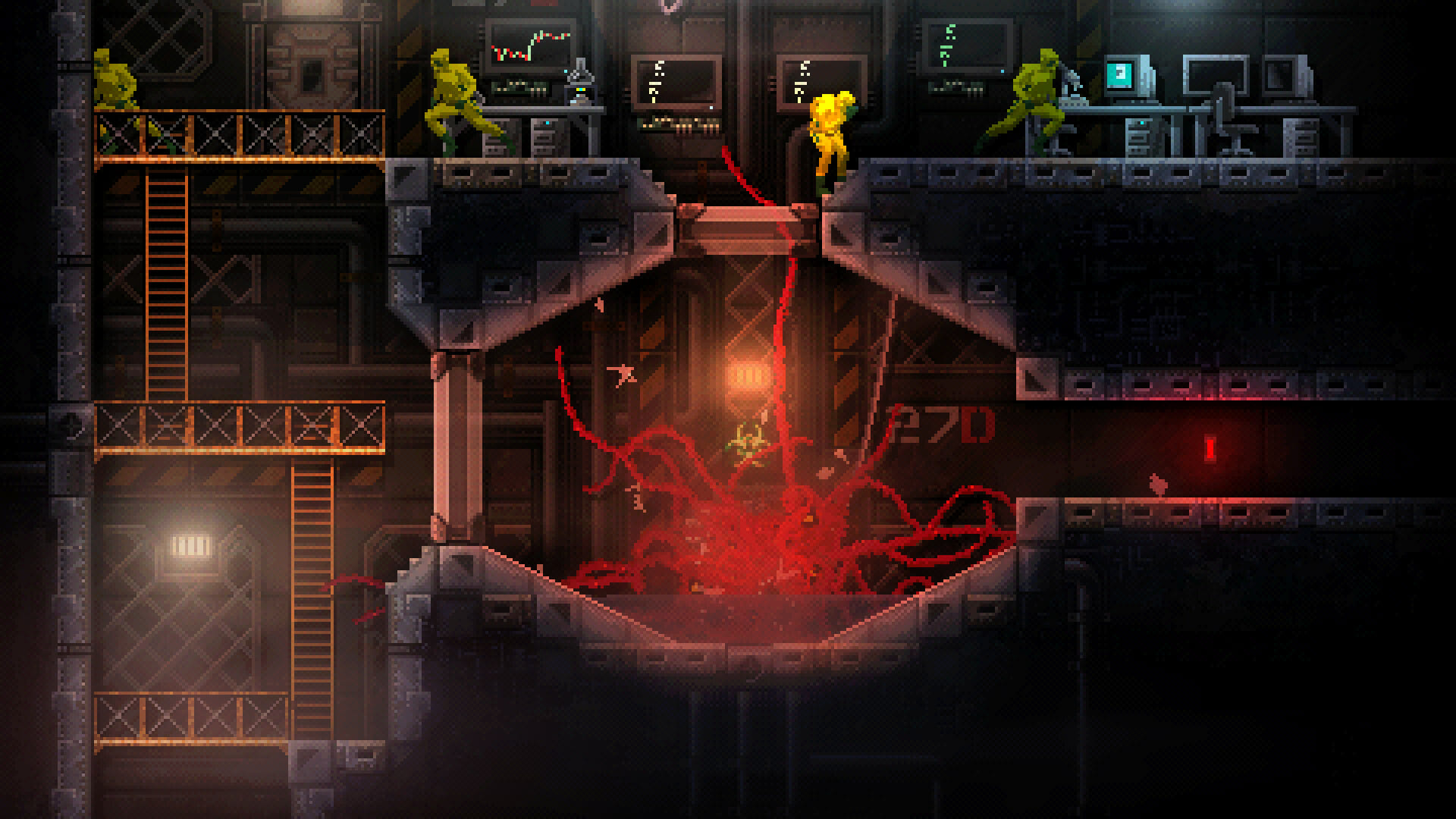 Carrion wastes no time putting you in control of the living ball of chaos that is the protagonist. You bust out of a stereotypical sci-fi containment tube and you’re off to the races.  The movement is frenetic as your many tentacles lash in the direction of your mouse cursor (or controller).  You can cling to any surface and the fluidity makes it extremely easy to pick up.  This is a good thing since the game ultimately requires some quick reaction throughout.

The layout of the environment is comprised almost entirely of hallways and tunnels.  This makes sense contextually as the perception is that the majority of the facility you inhabit is underground.  The 2D perspective allows you to easily make out the various secondary routes and paths you can use that aren’t inhabited by your enemies/food, the humans.  You can use these to easily escape or outflank them in many situations.  Nearly every encounter is set up like this.

Exploring this web of tunnels is part of the challenge though.  Many routes are one-way tubes and numerous sealed doorways block your path. Much like any Metroidvania-styled game, the ways you progress generally involve basic puzzle solving using skills you accumulate.  The twist is, however, that even after you find new skills, you have to be the right size to use them. 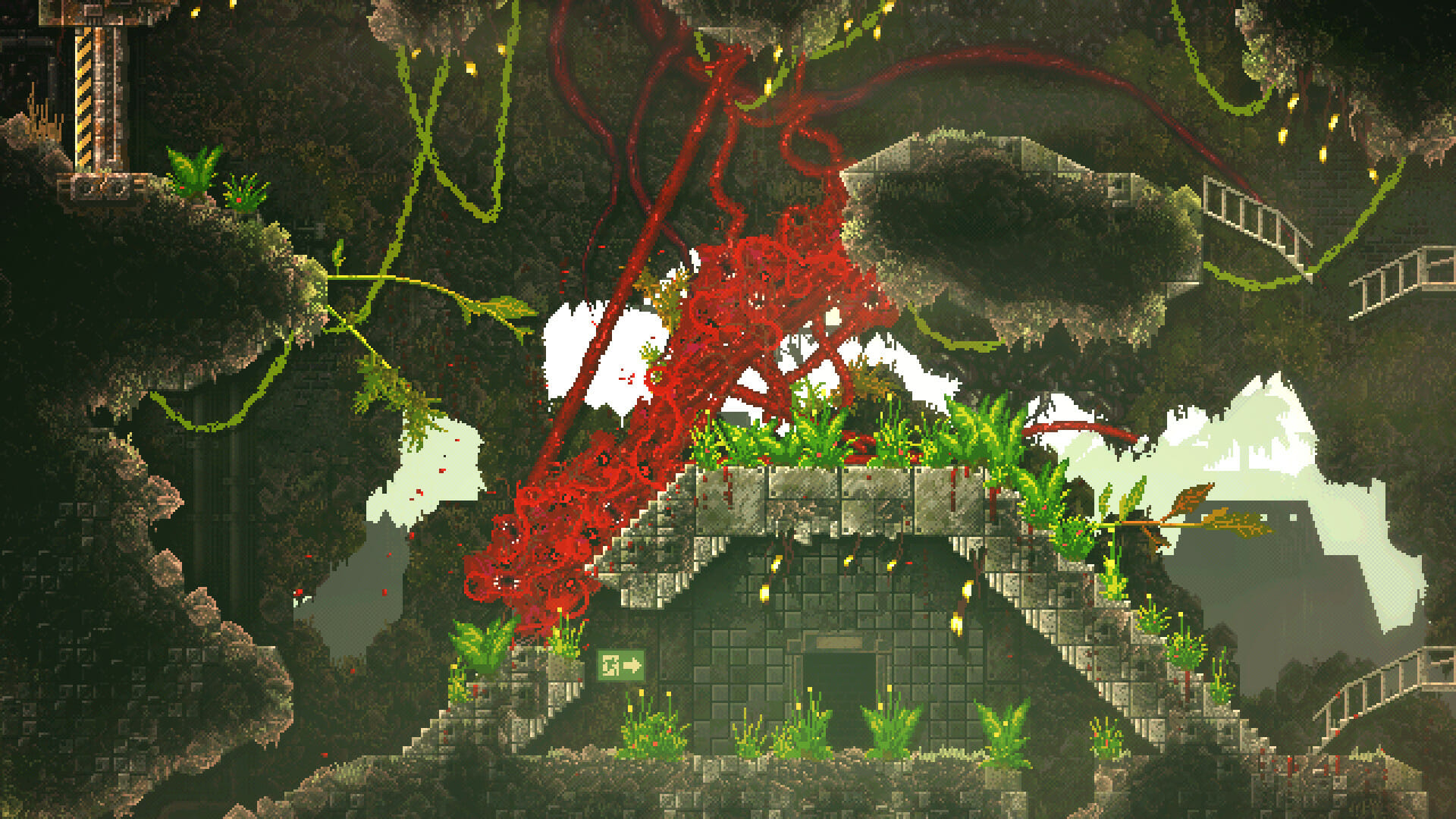 The size of your character, its biomass, is determined by how much you eat.  The many helpless humans you encounter serve as a wonderful nutritional boost for this process.  As you pounce upon them and gobble them up, you’ll gain health and become larger.  Once you reach max health, you won’t grow anymore, but you’re free to continue your feast.

One thing to consider though is that, for some reason, you can’t eat the various soldiers you have to fight.  From a gameplay perspective, this makes sense.  You’d be stacked with health.  However, there doesn’t seem to be a narrative explanation for it and that always bothered me.  Often when the floor was littered with corpses, it was hard to tell who you could and couldn’t eat for health.

As you progress, you’ll find more sci-fi containment tubes you can break open for more skills. These come in three forms: passive, offensive, and defensive.  Passive skills stay with you forever, such as growing larger and having more health. Offensive skills provide things like shooting a web that can flip distant switches or entangle your foes.Defensive skills range from sprouting deadly spikes to just plain turning invisible.  However, unlike a typical Metroidvania, you can’t just simply swap these.

To use different offensive and defensive skills, you have to change the size of your biomass. Your web-shooter is only available in the smallest of the three forms.  Yet the middle form is the only one that can use the ramming ability that can break wooden barriers that block entry.  In order to switch between these you either have to take damage or, more often, drop some of your biomass off in these special pools for later retrieval.

The use of this mechanism for solving the various puzzles feels well balanced throughout.  I was rarely stuck with any part that seemed too overwhelming.  Every time I came across a switch or a blocked path, I could consider what tools were available to me and keep Carrion flowing.  That’s probably why I rarely even considered how frustrating it should have been not having a map.

I can’t recall a game of this style ever skipping a map button.  It makes sense in concept, but at the same time, the large facility can be daunting.  The only time it ever stuck out to me was toward the end when you get to explore without any inhibitors.  The levels aren’t too complex or filled with tons of secrets, so that certainly made it easy to keep cruising from room to room.  Without respawning enemies, there also wasn’t anything keeping me from backtracking at will just to see if there was anything I missed.

It’s probably best that there aren’t respawning enemies though since even the most basic armed opponents can take you out if left unchecked.  The monster’s numerous abilities for nearly instantly dispatching these people is offset by their abilities to take you down just as fast. Later in the Carrion, things like flame-throwing soldiers and big mechs prove to be near-instant death sentences if you don’t approach them properly.  I can’t imagine how much tougher the game could be if you had to fight them every time you turned around. 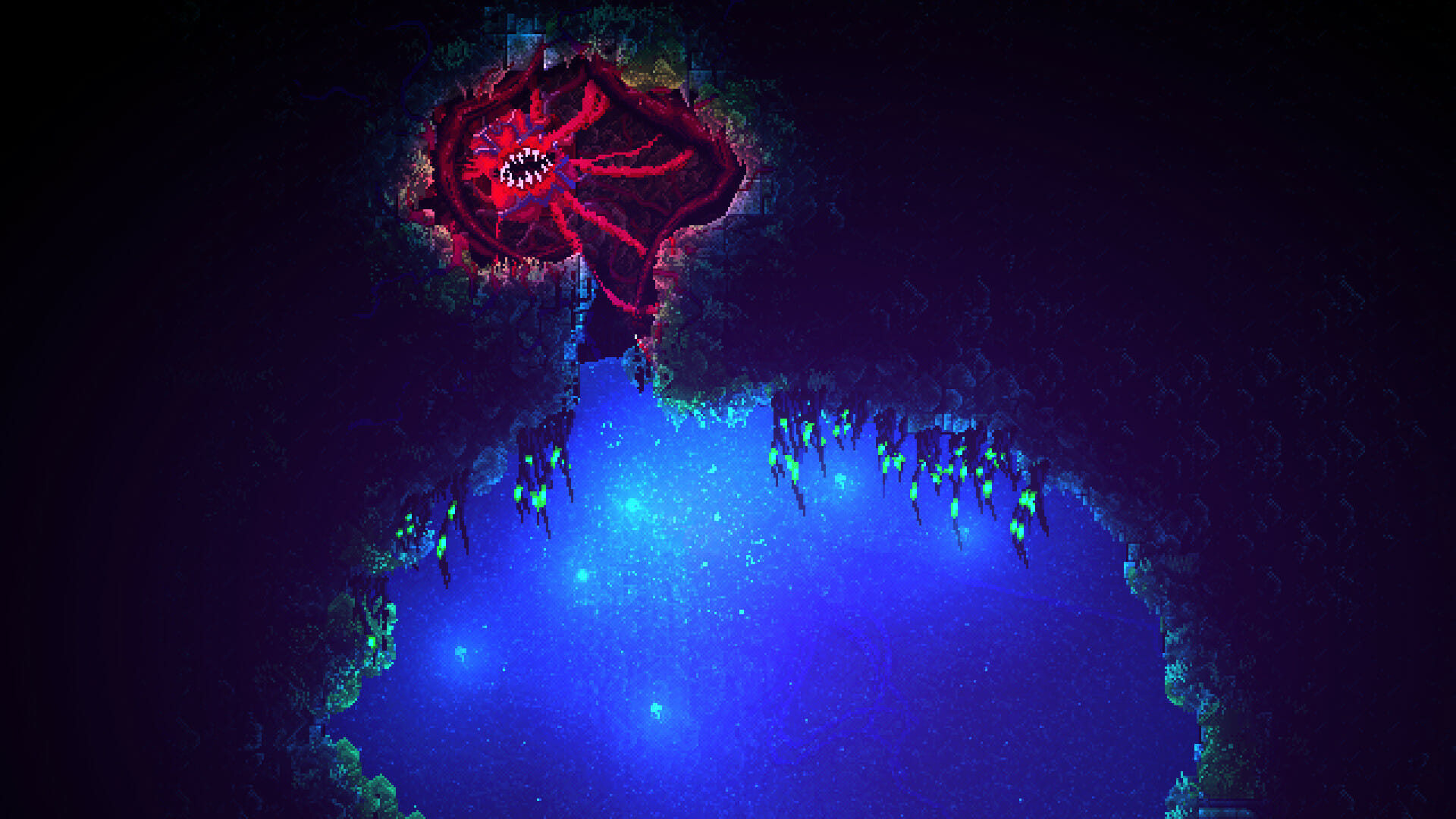 Carrion delivers a unique take on a game genre that tends to require many hours to get through.  It doesn’t fall into the familiar 2-3 hour range many Devolver-published games do, but it is only about 4-6 hours. Yet that period is packed with action, puzzles, and exploring a wonderfully crafted world.  I almost played through the entire game in one sitting because of the fluidity of the gameplay.

Every path you clear, each door you unlock, and the passageways you squeeze through leads you to more adventure. There is no fluff in this game. The only natural stopping points are the various save points you infest with your biomass.  Even then, they work as progress to unlocking the next doorway forward into this dark dangerous lab you’re slowly destroying.

Carrion delivers everything it promises.  The player gets to be a remorseless savage while unlocking a wordless story.  The way you achieve this is enjoyable from start to finish.  While it does have some minor frustrations, it was never enough to take me out of the experience for long.  Both the gameplay and the general style and concept are things I would enjoy seeing more of in the future.

If you’d like to check out some other Devolver Digital games, see our reviews for Katana Zero and Metal Wolf Chaos XD!

Carrion is a "reverse horror" game that uses its fluid gameplay to deliver a thrillingly brutal adventure in being a deadly monster.

[…] Do you want to try Frictional Games’ Amnesia: Rebirth? What do you think of my Amnesia: Rebirth review on PC? Please leave your thoughts in the comments below. Are you interested in more horror games? Check out our reviews for Amnesia: The Dark Descent, Remothered: Broken Porcelain, Maid of Sker, SIMULACRA 1 & 2, and Carrion. […]