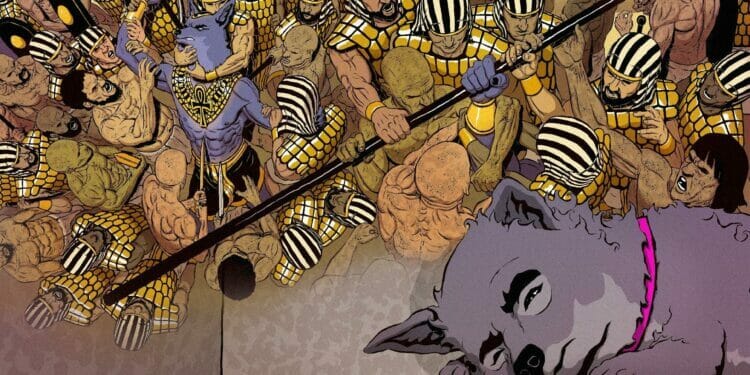 The creators of the action comedy comic book series Anubis: Dog of Death are proud to announce that the second issue of the comic will be on Kickstarter 30 days from Tuesday September 8th. Backers will reportedly have the chance to be drawn into the comic as cameos, some with speaking roles. There will also be an option for backers of the second Kickstarter campaign to get a copy of the first issue.

For those unfamiliar with Anubis: Dog of Death, the first issue was successfully Kickstarted back in February. A synopsis is also provided below:

Anubis – Dog of Death is a comic about Anubis, the Egyptian god of death. While once mighty, he now spends his days as a purse dog.

Anubis: Dog of Death is being written by Sindre L. Finnøy from Norway and drawn by John Barry Ballaran from the Philippines. Writer Sindre L. Finnøy had this to say regarding the second issue:

“In the 2nd issue, Anubis has to join his new owner Chloe for an audition at a Hollywood film studio. There he meets a goddess from a different pantheon from his own, and discovers an opportunity to escape from captivity.”

For more information and impressions of Anubis: Dog of Death, read our review of the first issue here and an interview with the creators here. If you like what you see, consider backing the second issue on Kickstarter.

Are you a comic book fan? What do you think of the comic? Let us know your thoughts in the comments section below.

How to Build a Career in Gaming