Batman tracks down a holiday-themed killer. 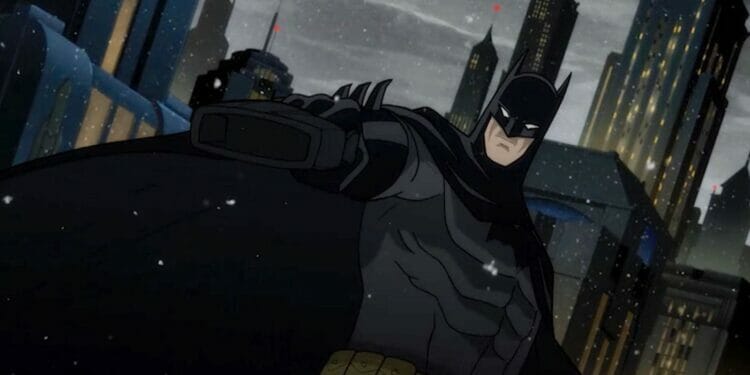 Batman is a hero who is far more fascinating as a detective. Watching him take down aliens and Parademons just doesn’t hold the same thrill. Seeing him grapple with criminal cases amid human hang-ups is what makes for the best Batman stories.

This is very much the case with Batman: The Long Halloween. Based on the comic book of the same name, this animated film has a little bit of everything. There’s a long-form mystery, personal tragedy, and a host of familiar Batman villains.

The Killer Strikes at Halloween

The film begins with a series of mobsters being killed around Gotham City. The murders occur on Halloween and the killer leaves behind a jack-o’-lantern. With the serial killer silencing his gunshots with a rubber nipple and covering his tracks, the authorities and the mob families are perplexed.

The gangsters murdered are part of the Falcone crime family. This is a name familiar to Bruce Wayne as his father had organizational ties with such a group. Naturally, Bruce tends to sever that tie as Batman.

He will, however, have to dig into some of his past. He’ll also have to tap a number of possible villains for clues to the murders. One of them may even be the killer on the loose.

Investigating the case is both Police Commissioner Gordon and District Attorney Harvey Dent. Both of them have a home life that is in trouble. Gordon tries to balance out being a father and Dent is struggling to connect with his wife.

The case they are on proceeds for a long time. The killer continues to strike every holiday and few clues are found. It becomes a taxing experience for both members of law enforcement.

Of course, Batman lore dictates that Harvey will succumb to injustice and become Two Face. You’ll certainly get that in the film but through a slow burn. Just when you think this is the tipping point, he struggles further.

The Long Halloween features a slew of villains thrown into the mix to stir things up. Some of them are essential, as with the creepily calculative Calendar Man. Catwoman’s inclusion adds some sexual tension for Batman as well as a relatable ally.

The majority of the villains, however, are just present for show. Joker will muck about in the first part of the film but only to act as a red herring. Scarecrow and Mad Hatter also pop up as tertiary characters who rob banks.

There are some small moments that cleverly use the villains. Penguin has his moments of business-oriented evil and Grundy adds an extra dose of chills for lurking in the sewers. All of them, though, just kinda culminate in a weirdly jarring showdown.

The voice casting for previous Batman animated films has been hit or miss. This film, thankfully, is a hit. The voice cast is in top form and all of them bring their A-game.

Jensen Ackles gives a refined performance as Batman and Bruce Wayne, providing a thoughtfulness for the character’s convictions. Naya Rivera also gives Catwoman the right amount of grit and sass.

Extra credit needs to be given to David Dastmalchian as Calendar Man. He has this perfect Hannibal Lecter pitch of quiet madness. It’s a perfect tone for a character who locks himself in a mental prison of mesmerizing dates.

I was also surprised how well Troy Baker has settled into the role of Joker. There are points where he slips so seamlessly into that Mark Hamil style of voice it made me double-take.

I also wasn’t expecting such great acting from Josh Duhamel as Dent and Billy Burke as Gordon. Both of them have some of the most prominent roles and compelling emotional arcs. It’s good to know some extra effort was placed in their performances.

Previous DC Comics animated movies have looked a little samey. This picture tries to embrace a slightly more unique animation style. It’s not a major departure but there are hints of brilliance.

The most notable aspect is the bolder outlines around the characters. There’s a more comic book style look from this choice that makes the images pop a bit more. The character designs also have a more angular and detailed look to them.

For a story that takes place over the course of many holidays, The Long Halloween breezes by fast. It finds just the right points to cut. The dramatic scenes play out brilliantly and the exposition is brief and rarely boring.

I particularly dug the slow course of Harvey’s transformation into Dent. There’s a moment where Dent goes to the hospital and the audience is led to believe this is it. That transformation takes place almost unexpectedly later.

I particularly dug the opening to Part Two, which starts with Bruce in a Poison Ivy induced dream. It’s a great way to make time pass with Bruce’s time of being under her spell. It’s also a great way to get Catwoman more involved as someone that Batman needs in his life in more ways than one.

The Long Halloween has a lot of what makes Batman great. There’s a compelling mystery with plenty of dangerous folks involved. There’s pathos and tragedy brewing as the investigation proceeds down dark paths.

More importantly, there’s a real sense of character to the central players. Gordon and Dent feel less like the grunts and more like the real heroes of this story. They suffer the most and struggle to pull themselves back from the brink.

The film manages to balance so much and also has a time for a decent Halloween joke. Alfred at one point remarks how silly it is for Batman to criticize the concept of Halloween. It’s funny but also poignant to question the Dark Knight’s influence.

Did you see Batman: The Long Halloween? Did you rent it or watch it on HBO Max? How does it fair against other DC Comics movies? Was it better than The Suicide Squad? Let us know in the comments below.

An intriguing mystery with a fantastic voice cast and a slow burn of drama.