A dirty misfit dozen with all the right stuff. 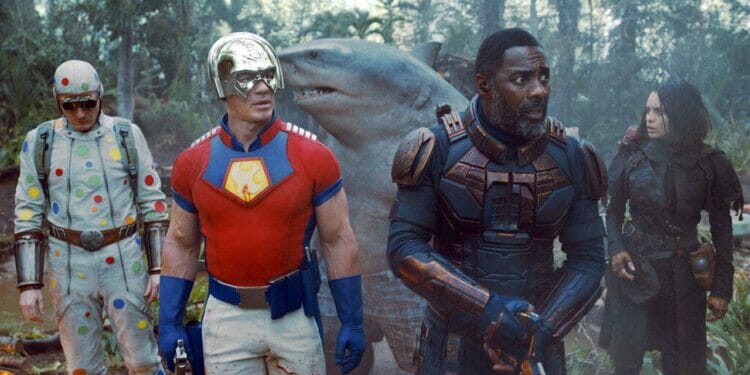 The DCEU is in an exciting state of restructuring. Aiming to be more than just a Marvel Cinematic Universe replicator, DC Comics movies are now able to expand into other areas. They can be freer from the shackles of summer blockbusters as well as most executive meddling.

James Gunn’s The Suicide Squad is very much the perfect project for such a rebirth. It brings all of Gunn’s hallmarks to DC Comics with a darkly comedic punch. Basically, it’s the wild Suicide Squad movie most have been waiting for.

There’s a unique subversion to how Amanda Waller (Viola Davis) assembles her team. Consider how she convinces the expert assassin Bloodsport (Idris Elba). He doesn’t want to be a part of Task Force X and he has a daughter.

Unlike the previous film’s Deadshot, however, Bloodsport has a horrible relationship with his daughter. Their meeting at the prison leads to a shouting match of rage and disappointment. It’s only once Waller threatens the girl’s future that Bloodshot reluctantly agrees.

The assembly of Task Force X remains the same. Prisoners are given reduced sentences if they complete dangerous missions by an American block-ops organization. If they fail or disobey, explosives in their skulls will detonate.

What isn’t the same are prisoners chosen that feel very much like runts of the litter. Characters like TDK, Javelin, and Weasel are such ridiculous villains with absurd qualities. Gunn’s film never misses a chance to bask in this silliness with a tongue-in-cheek tone.

The film is, however, not devoid of anti-heroes worth caring about. In addition to Bloodsport learning to show some love, Ratcatcher 2 has an emotional build. As an orphan, her need for a father becomes just as compelling as her ability to control rats.

Polka-Dot Man may seem like a one-note character. Yet he’s given one of the more pitiful and inspiring developments. His suicidal nature and bitterness for his mother make him the sad-sack character worth rooting for his survival.

King Shark may seem like a big and dumb shark who eats people but there’s more to him. While he can’t quite form the right words, his heart is in the right place. At his core is a creature who just wants to be accepted and have some friends in his life.

While the film does lead up to the squad fighting a giant monster, there’s a bigger threat to this story. It’s not just Waller that is the true villain but nationalism itself. Throughout the mission in South America, the team tries to grapple with hostile tensions of nationalistic rhetoric from both hemispheres.

This true evil is best showcased in the squad member of Peacemaker. He may seem like a quirky freedom fighter but Peacemaker has a frightening level of patriotism. Unquestioning his orders from the top, he’s by far the most dangerous of the squad.

Gunn’s penchant for irreverence and crudeness has not diminished amid his Marvel phase. His take on the DC Comics ensemble doesn’t relent on the vulgarity and violence. Characters are gored and brutalized in a variety of ways when they’re not slinging profanity.

The allure isn’t just the presence of such adult content but how it is wielded. Gunn’s bombastic nature always drives some level of charisma and surprise. It’s not just a funny picture for the fact that Peacemakers states he’d eat genitals; it’s that he would eat genitals to rationalize his loyalties.

Also staying true to Gunn’s formula is his ability to place some genuine emotion in misfits. Harley Quinn (Margot Robbie) has a surprising level of sympathy in the post-Joker phase of her life. She grows in a manner that she starts not only recognizing terrible relationships but actively and literally shooting them down.

The way the film portrays horrific violence also makes one care for the squad. From the giant monster they face to the towering authoritarianism that enslaves them, there’s more than enough reason to root for the villains. Well, anti-heroes, really.

The Suicide Squad may very well be the best thing to come out of the DCEU. It’s a film that takes absurd aspects of DC Comics and presents them with glee. The costumed dorks are recognized as such but also given great charm amid their over-the-top nature.

This new direction for DC Comics movies is proving to be a winning formula. Heavy R ratings and freer control for directors has led down a fantastic road of unexpected glee. For the trend of comic book movies becoming samey, The Suicide Squad is like a dynamite blast to this tiring mold. Want more exclusive DC news? Visit The Direct and the likes for more content.

Did you see The Suicide Squad in theaters or on HBO Max? How does it stack up to the previous movie? Is it a better picture than Birds of Prey? Let us know in the comments below.

James Gunn brings some gritty fun to the somber DCEU.