It has all the games

by Endyo
in Game Reviews, PC Reviews, Xbox One Reviews
1

Bringing Battletoads back after 26 years was ambitious, to say the least. As far as beat’em ups go, it was always in the company of the most challenging. However, it maintained a great deal of popularity and (with the help of some memes) managed to get this modern iteration into the franchise. While it certainly brings forward the classic eclectic design of past games, it can fall short in areas that feel critical to the flow of the game.

Battletoads historically always had a somewhat “cartoony” design for its characters and environments. The developers seem to have leaned into that design and used it heavily in this modern version. In fact, the many cutscenes throughout the game make the entire experience feel like an interactive cartoon. Bright colors and relatively flat designs 2D designs are everywhere. The styling is prominent, but with the numerous cutscenes, it works pretty well.

The characters and enemies express this as well. Many of the combos in attacks lead to shape-shifting animations just like previous games. They do a great job expressing the power of the moves while also being entertaining. The environments share the same bright colors and garish set pieces that each on-screen character does. They look great, but when you couple that with the insanity that comes with the combat and you can easily lose track of what is happening. This made some moments of the game more difficult than they probably would have been with cleaner visuals.

Enemies also get cartoon-styled designs and animations. Some of these designs are so over-the-top that it can be hard to tell what they were going for. I suppose that’s the nature of creating worlds with aliens, but they never looked as cohesive as the designs for the Battletoads. If you asked me to describe more than one or two of the more notable enemies from memory, I’d have no idea where to start. It’s not necessarily a bad thing, but I just think they could have given them more recognizable shape and structure without sacrificing the originality. For a relatively simple genre, the combat can be reasonably complex. The bevy of abilities is described in tutorials throughout the beginning of the game. At some point, when I unlocked my third tongue-use ability, it seemed a bit much. Being able to combo several moves along with swapping characters to build better combos is already a lot for a brawler. Trying to pull off more complex maneuvers often left me with a worse outcome than doing it a simpler way. Yet, there is an incentive to try using variety and bigger combos to get higher rankings each level.

However, the real issue is that Battletoads seems to be only about half a beat’em up. The other half is a huge collection of (sometimes very strange) puzzles, minigames, and vastly different genres. This isn’t unprecedented since many of the other games in the franchise have non-fighting gameplay. Yet, here they take it to a new level. Sometimes, it is an entire level. There’s even a significant puzzle platforming section where you play some random background character.

The frustrating part of all of this is that each try function as a complete experience. That means they had to introduce the brand new mechanics gently, add to them at a reasonable pace, and finish in a way to bring them up to the challenge of the rest of the game. This leads to them feeling needlessly long or disproportionately challenging by the end. The variety they provided was interesting, but the cost of repeatedly separating you from the core gameplay was not worth it. 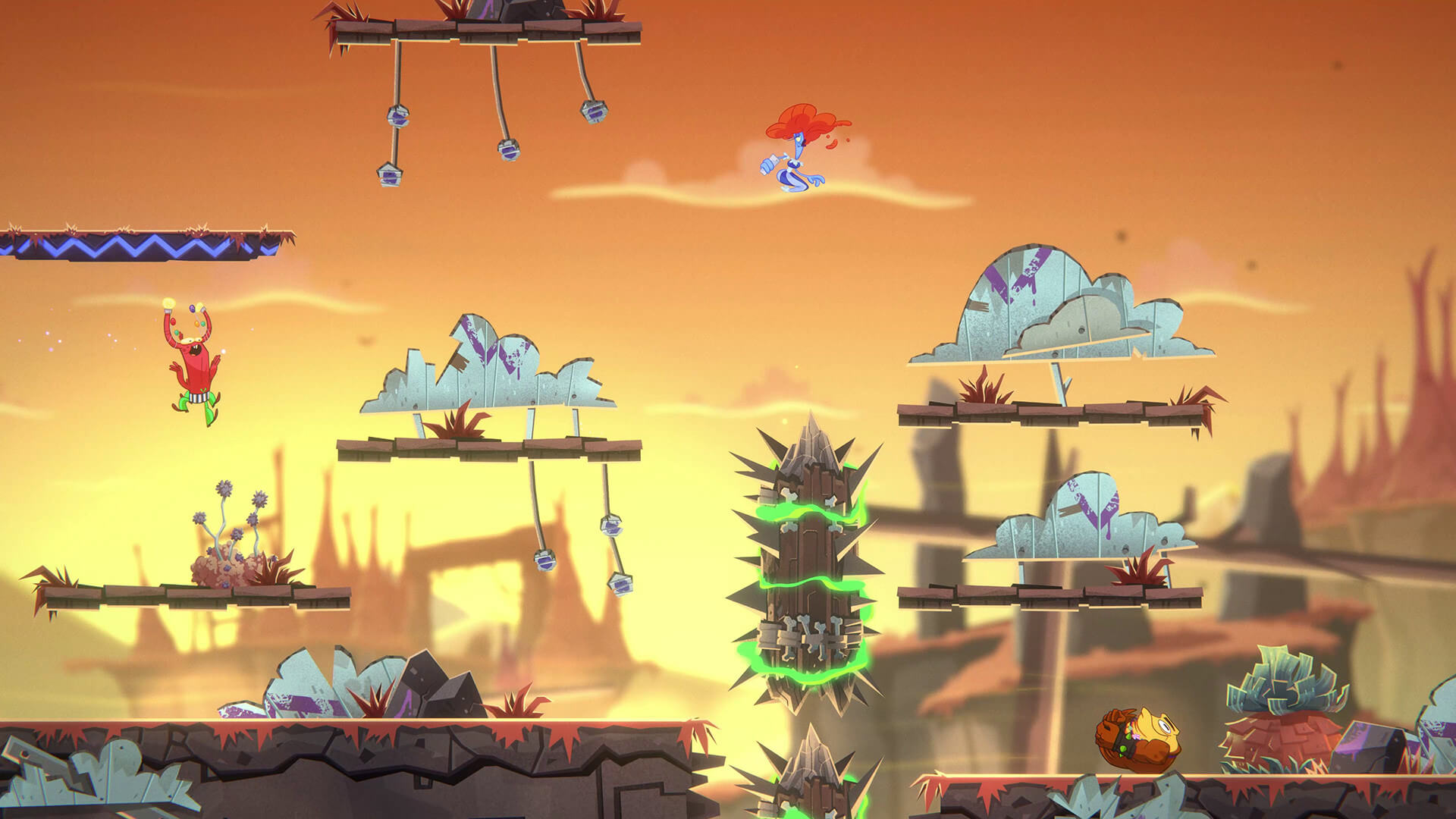 The developers of Battletoads seem to have worked hard to get as many jokes in the final product as possible. The cutscenes had me laughing more than once, but other times the juvenile humor fell flat. The effort was always there though. Especially in the animation and voice departments. The voice-over crew in particular deserve their accolades for making some mediocre lines entertaining.

Mediocrity seems to be the measure across the board here though. The combat seemed solid when it wasn’t visual anarchy, but I’d loved to have seen more of it in the game. Other parts like the twin-stick shooter spaceship sections were acceptable. Even the random toad-less platforming wasn’t that bad. My issue is that, when taken all together, it stopped feeling as if it was a cohesive game. The third act has so little fighting in it, I had to stop and remember exactly how to do it when going back in the action.

Coming off playing Streets of Rage 4, another revival of an ancient franchise, made this feel much more disappointing. That game had its quirks but felt like a real addition to the series. This recent iteration of Battletoads feels almost like an experiment. A test to see if a dozen different stretched out minigames can work as long as you tell jokes in between. It may not be the best choice to bring this franchise into the modern-day, but I do hope they give it another shot. Maybe next time add just a tiny bit more maturity to the comedy (not too much) and give us an online multiplayer because no one can think of a reason it’s not here. However, given that this is part of Game Pass, it’s worth trying for that fairly minor investment.

If you’d like to see more reviews, check out these for Streets of Rage 4 or Yakuza Remastered Collection!

Battletoads presents a part beat 'em up / part everything else experience that is doused in hit or miss comedy, but still comes out decently fun in the chaos.