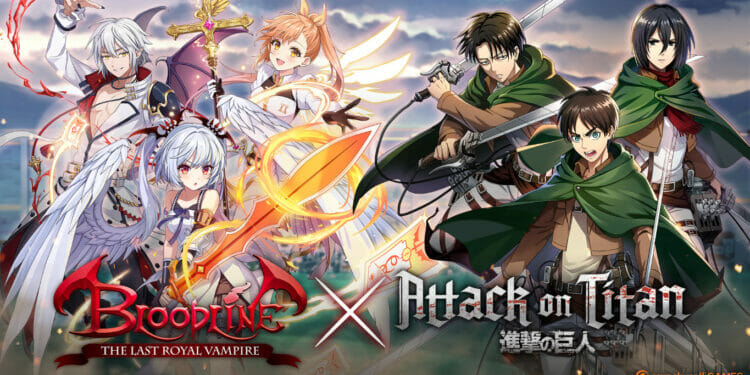 Crunchyroll Games recently announced that it is launching its newest mobile game, Bloodline: The Last Royal Vampire. Pre-registration is now open for the retro-style mobile JRPG game based on the popular Chinese graphic novel Bloodline. Additionally, Crunchyroll announced that during pre-registration and for a limited time following launch, Bloodline: The Last Royal Vampire will feature a crossover collaboration with globally popular anime Attack on Titan. The game will be available worldwide, excluding Asia, this summer on iOS and Android. To sign up for the game visit: Google Play or Apple.

“Bloodline is an exciting story pitting good vs. evil in an epic battle for survival that makes for an exciting mobile game. We can’t wait to unleash the action on players. We are deeply humbled to work with Shanda Shengqu Games and Kodansha to bring Attack on Titan characters into the Bloodline world and create a truly epic launch experience for fans. We know the massive cast of characters, deep story and endless gameplay will keep fans coming back for more.”

The game’s details can be seen below:

Bloodline: The Last Royal Vampire follows the Last Royal Vampire Lilo and her companion Ren in their quest to save their loved ones from a militaristic order called the Holy Land. Players build their own squad of warriors, heroes, and fantastical creatures to defeat exorcists, hunters, as well as vicious demons, and many powerful beings pulling the strings from the shadows. The anime-styled mobile role-playing card game features hundreds of characters and customization, allowing for a roster of heroes that is distinctly unique to each player.

RETRO-STYLE MOBILE JRPG – One of the most popular types of mobile games, Bloodline: The Last Royal Vampire is a tactical turn-based card game in a modern fantasy setting.

OVER 400 CHARACTERS TO COLLECT – from valiant knights, demonic warlords, to maniacal jesters and minigun-toting waifus, there’s a mind boggling array of heroes to unlock and evolve, with more new characters always on the way

CHARACTER GROWTH & PROGRESSION – Take your characters into battle and feed them powerful upgrade materials to unlock their true powers.

BLOODY COMPETITION – Claw your way through other players in a multitude of PVP features like the Arena, Tower of Fate, as well as giant Guild Battles, and live cross-server Wars!

PLAY MORE, GRIND LESS – With features like Auto Battle, Raid, and Auto-Mine, Bloodline allows you to devote more of your time to managing your squad and fighting off the Holy Land. Clear stages and progress through the game effortlessly while earning all the items and materials to level up your fun!