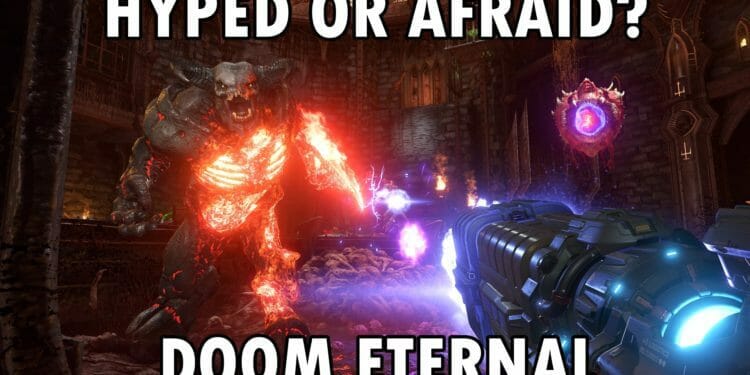 So gentle reader, it won’t be long now until you fest upon the flesh of bloodthirsty demons and blast them in the face with a wonderful armament of weapons.  That’s right, Doom Eternal is out soon and after a lengthy delay from November 2019 to March 2020, we’re holding our breath for a number of reasons. What caused such a delay? Will the game be better with extra time in the hellish oven? I’ve been able to check out Doom Eternal as many have now and I have a few thoughts on whether Doom Eternal will be great or a certain hellish nightmare.

Once upon a time, there was the Doom slayer

Now Doom 2016 was pretty light on storytelling but gave us a humble tale of a juiced-up marine who’s been dragged out of Hell. Sadly some friends have come along to ruin the day for many scientists on Mars. As a lovable, one of character from Rick and Morty said “oh boy! Here I go killing again!”. Granted it was nothing such as The Last of Us, Disco Elysium or Spyro the Dragon, but Doom 2016 had charm and heart.

Well, Doom Eternal is going all Game of Thrones on this s*** and delivers a meatier universe with complex lore and awesome sounding character names like the Betrayer. There’s a war going on between, Heaven, Hell and the Humans with a bunch of fellows stuck in the middle. What I like about Doom is that Doom slayer feels like the dude who’s stuck in a giant mess and he’s going to clean it up. One glory kills at a time. But this doesn’t mean we can’t get some context on what the actual f*** is going on.

Is it needed? Not really but I do appreciate the fact that the developers/writers have to give the world a greater sense of purpose, rather than just being a senseless playground of destruction (which isn’t a bad thing). But now we have substance, meaning and some cool places to visit thanks to a much more fleshed out story.

More guns, arm blades, and shoulder-mounted power weapons make up an impressive roaster of things that kill demons in awful, yet entertaining ways. There’s the classic line-up featuring combat shotgun, Plasma Rifle, Chain gun, and all the returning favorites. But now Doom Slayer will have his way with a number of melee weapons, new heavy weapons ripped straight from Heaven and Hell along with a few new abilities that ensure plenty of ripping and tearing.

All of the ones we’ve seen are pretty awesome, leaving a mark or hole in any demon foe! Plus there are new abilities that add a visceral and tactical edge to gameplay/gunplay. Overall the new additions are great, giving more variety in your murdering style while the new abilities such as the Blood Punch add a layer to tactical play which is useful in the harder difficulties.

Why have the developers gone all Nintendo? If like me, you’re probably asking this same question. Why have so many of the levels have platforming sections resemble something from Bowser’s castle in Mario 3?

Yeah, I found it a little distracting and just a little puerile when I had Doom Slayer jumping from one floating platform to another that would drop into a pit of lava if I wasn’t quick enough all the while avoiding spinning chains that were on fire and floating in mid-air. Like who set this all up in Hell? Does Hell have its own guy that makes spinning chains on fire and timed platforms? Are these like standard routes demons take to go to work?

It also doesn’t help that health, ammo, and weapon pickups look more …. Well like something from an over the top video game and not what we saw previously in Doom 2016.

I did really like the more ground approach in Doom 2016’s presentation and picking up those badass weapons with each mini cinematic was awesome. Now it seems more like a Saturday morning cartoon that’s extremely violent rather than the style Doom 2016 set up.

It’s even weirder as the story while having some satirical moments (Earth is the melting pot of the universe, LOLZ) the overly bright and cartoony pickups just feel really out of place.

Especially with the world looking so good … speaking of which.

But the world is still enticing, beautiful and fun to explore …. Like Mario

That said the world is still immensely entertaining, beautiful to look at and just a ton of fun to explore. From what we’ve seen so far, every location in Doom has been crafted with absolute professionalism, care, and mastery, it’s just insane how good this universe looks. It’s a crime I tell you.

Plus, being the Doom slayer and exploring the world filled with secrets, booby traps, set pieces and arenas of mass murder is like being a hyperactive child in a candy shop. Finding some of these well-hidden secrets is like a mini-puzzle but ones that don’t break the flow or the pacing of the action. They’re there as a reward and something to seek in order to enhance you’re a-game and demon-slaying. Arenas are massive and do follow the golden rules of creating the best FPS arenas. They are:

These rules made games like FEAR what they are and Doom Eternal takes all the best things about Doom 2016 and pushes it even further. Interactive traps, more advantage points and more demons on-screen mean more carnage. But this wouldn’t mean anything if Doom Slayer wasn’t quick on his feet.

Doom Slayer is a nimble son of a gun!

Doom Eternal manages to make Doom Slayer even more deadly while moving with utter grace. He floats like a butterfly and stings like a wrecking ball. He has a good sense of movement and speed, while his fluent movement is brought over and thankfully so as levels and arenas, in general, are much more complex in design, requiring that extra step or gigantic leap the improved movement brings.

This means, of course, there are plenty of platforming sections and I personally have weird feelings about it.

Again, why has Doom gone all Mario 64?

Doom Slayer will jump, duck, dodge, dive and move from one floating platform to another. Now I did bring up this point before but I need to go into detail as there seems to be a fair amount of platforming.

Platforming sections are found across the game it seems and it gets Doom Slayer, jumping, bouncing and climbing like Nathan Drake on crack! This all seems exciting and cool, as it breaks up the action quite nicely while not ruining the flow. But these moments can be rather intense and depending on how your parkour it and if you like platforming in general, you might not be the biggest fan.

There were platforming sections in Doom 2016 but these were short, sweet and often connected one arena to another. Like how Half-Life used vents to break up the action and quickly get players from one place to another.

But here in Doom Eternal, platforming like a star like the gunplay and violence. It’s so much a part of Doom Eternal’s DNA, you get multiple lives and checkpoints in case you miss a step or jump a little too early. True there are lives throughout the game and you can use them during a firefight gone wrong, but how you apparently find plenty of extra lives more so in these sections could mean a few things.

The developers are aware these sections are massive and impose more of a threat more than ever. Or that the cartoony and goofy platforming sections might be a striking contrast to the demon-slaying arenas. While they seem like a lot of fun, I’m sure fans will be divided in some ways.

But with all that jumping, falling into lava and all, Doom Slayer just needs to rest his feet.

So there’s a Hub area that links all the missions together and it’s called the “Fortress of Doom” and it’s freaking amazing. OMG, OMG …. Sorry.

I’m not sure why but I love the idea of a Slayer Pad. In general video game Hub areas can be great if loaded with surprises and rewards. Wolfenstein: The New Order had a pretty sweet hub area where you could explore, find loot, Easter eggs and more with Doom Eternal doing the same.

The Fortress of Doom has plenty of areas to unlock with sweet rewards to find and equip, some neat Easter eggs including a reading area. Yes, Doom Slayer loves to read apparently and here you can contemplate, relax and above all, gear up! I could imagine The Fortress of Doom being on a show like Cribbz or something (is Cribbz still going?).

The music is amazing! Check it out for yourself below.

Yeah, I’m super excited for Doom Eternal, despite any small concerns I have. Those small problems are mainly with the weird aesthetic choices with pickups and the ultra-extreme platforming which resembles a Hellish version of Total Wipe-out.  But even so, these look like a ton fun to play out and do seem well designed. The gunplay, violence, demons, action, awesome lore and just everything, in general, seems on the mark.

And as for the multiplayer? Looks perfectly fine and will most likely not set the world on fire (unlike the world in Doom Eternal) but will be enjoyable and a nice side dish for what will be an epic campaign. Plus, people can finally enjoy Doom 64 without having to emulate it!