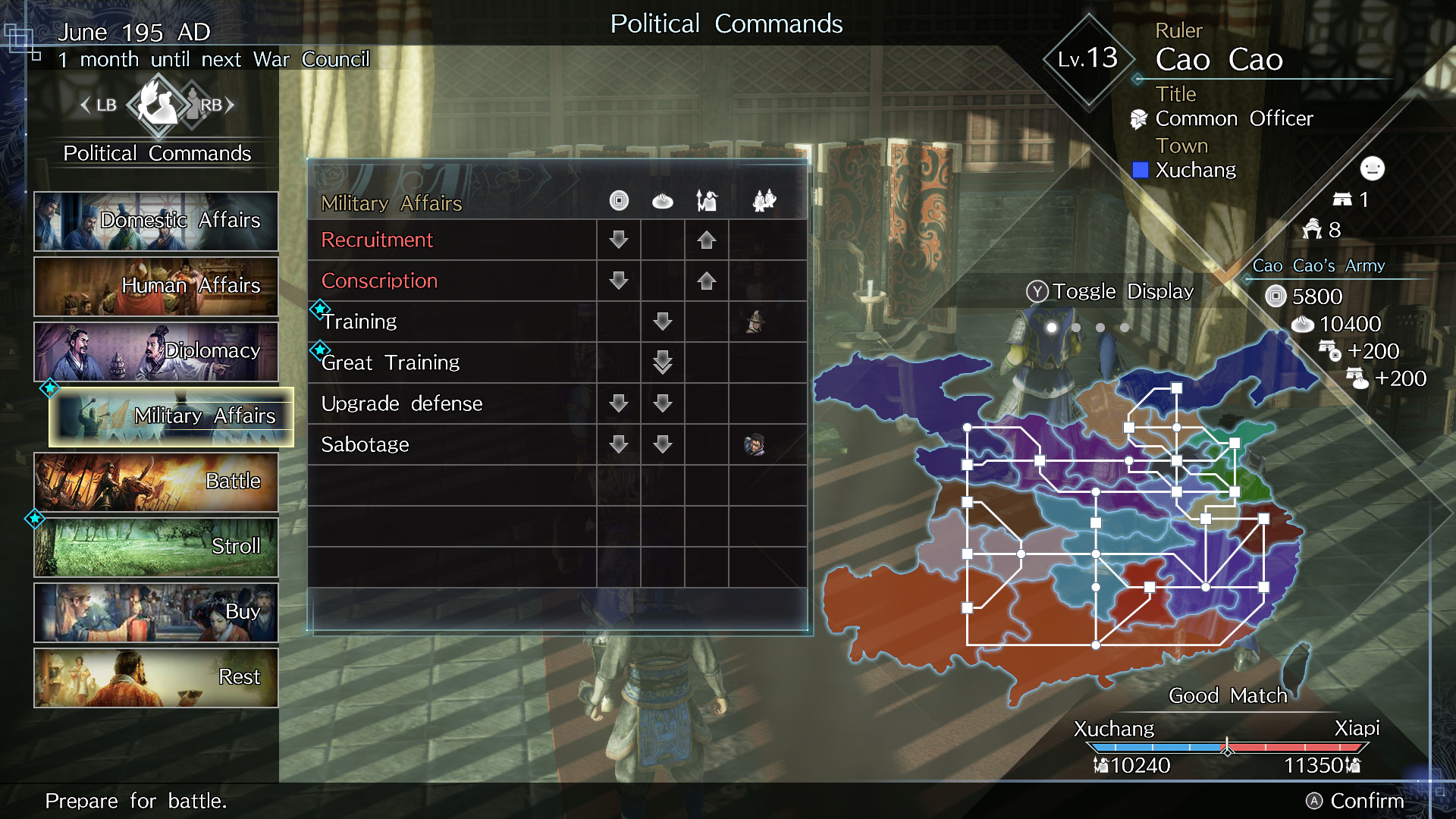 Dynasty Warriors 9: Empires takes the concept of the Romance of the Three Kingdoms novel by Luo Guanzhong, and follows you as an officer of one of the rulers of said kingdoms or an  unaffiliated officer as you climb your way up the ranks to become a formidable conqueror yourself. Aside from the new character creator mode, which I found incredibly detailed and satisfying, despite not spending that much time with. The Conquest mode is the part of the game I spent the most time with.

As the game follows a strict month-to-month formula, players have a limited number of actions to execute before the next month arrives. Each step you take will contribute to growing several aspects of your empire, including Domestic Affairs, Military Affairs, Human Affairs, and Diplomacy.

When playing through the game, players will have to recruit officers to their party, by either strolling through menus or physically and engaging in conversations with other unaffiliated and affiliated officers, procuring resources by either trading or pillaging areas, building your military force by training your officers, and putting points earned through each month into your Military Affairs. 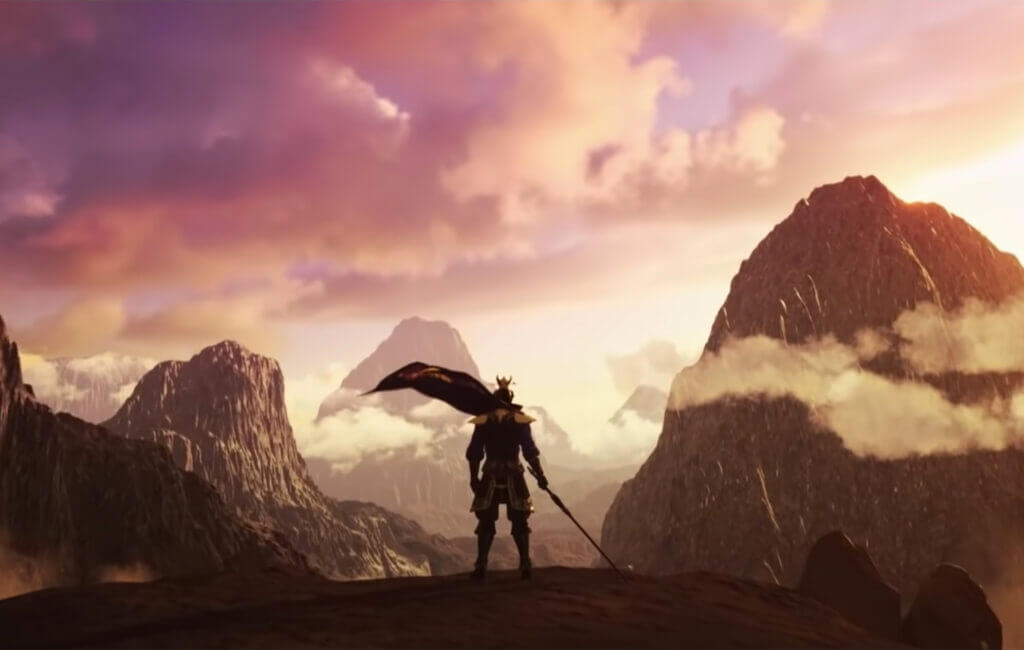 An Empire Isn’t Built in a Day

One thing I had to come to terms with during the process of building my empire is that progress (especially at mid to high difficulty levels) is incredibly slow and, at times, arduous. Some officers will vehemently refuse to join your cause unless you’ve spent a reasonable amount of time befriending them. Gathering resources for your empire is also a slow process, especially if you aren’t pillaging every area next to yours at the price of being labeled a villain.

Going into battle is also highly inadvisable if you’re starting out, as if you don’t have a good number of officers under you or the adequate military might to face an opposing kingdom, you will not have a good time in battle as you’ll mostly see yourself frantically failing to complete one objective after the other due to a lack of adequate or competent manpower. Worse is that if one of your officers falls in battle, they are gone for good which leaves you at a significant disadvantage (though this can be turned off before starting your playthrough). 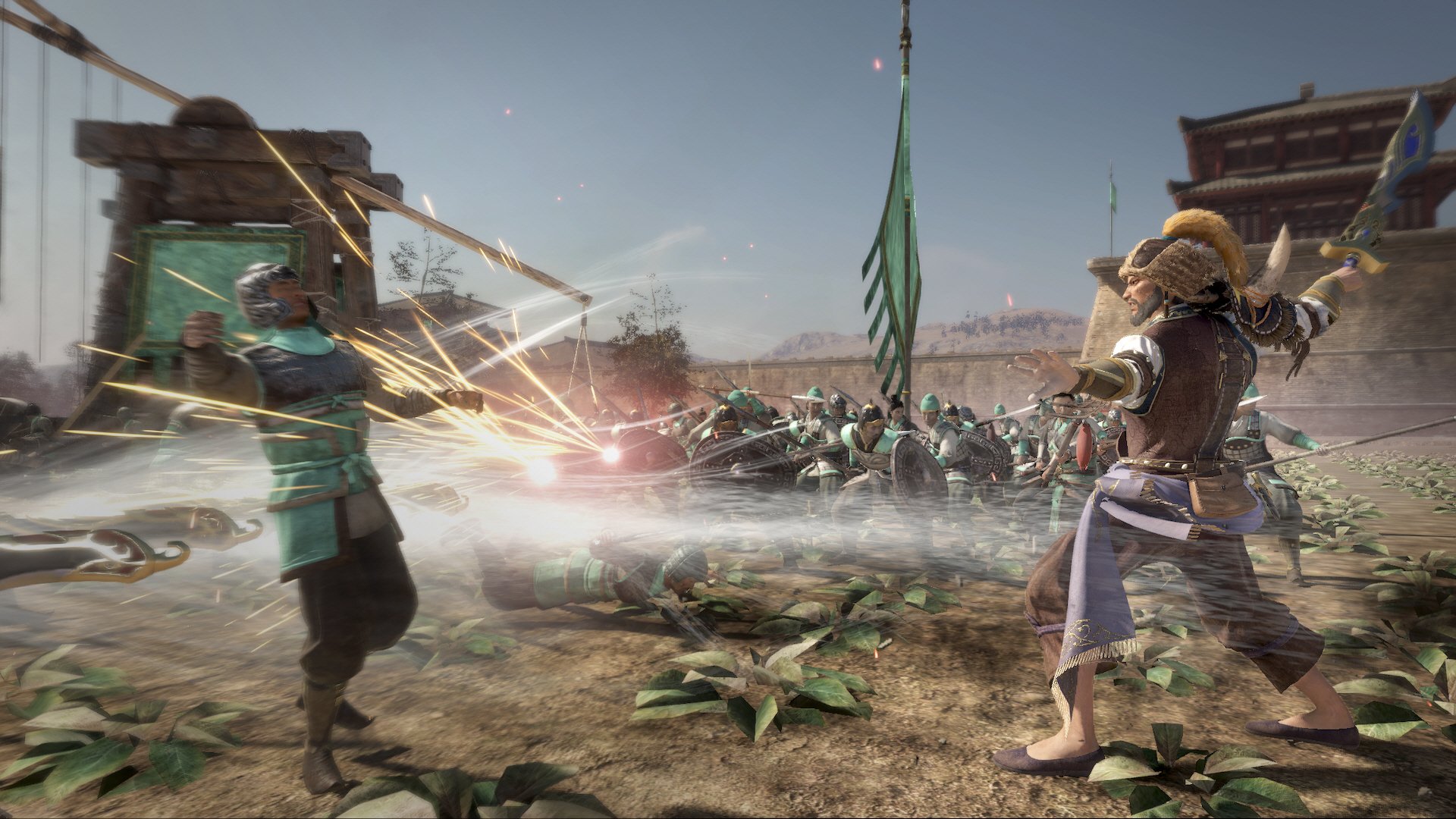 As for the meat and potatoes of the game, the combat, players should expect to fight hordes and hordes of enemy troops and a handful of enemy officers while defending or attacking a castle in true Musou game fashion. You’ll move from one objective to the next at breakneck speed, many of which surprised me in blending really well with the story. Other than that, combat is fun and primarily effortless, and using each officer’s moves and special attacks was always satisfying. Narrative-wise, however, while I admit the game’s story isn’t bad, it, unfortunately, wasn’t my cup of tea as the gameplay elements incredibly overwhelmed the other aspects of the game.

In terms of visuals, while the Switch version isn’t as visually stimulating as the other versions, I will acknowledge its detailed and pretty character models and designs. Sadly that’s all the praise I can give in that the department as the rest of the game is unfortunately rather ugly. The repeated environments have low textures, dull colors, and are all extraordinarily empty and downright depressing. While the open-world elements of the previous entry were rightly removed, what’s leftover hasn’t been improved at all either.

On PS4, Dynasty Warriors 9 runs at 30fps, but not a stable one. I encountered some frame rate dips here and there but never enough to be distracting and nowhere near as bad as its Switch counterpart.  However, you will still see texture pop ins, even on some of the newly rendered cutscenes, asides that, load times are pretty average. Not as bad as the Switch version but not nearly as quick as the PS5’s, which is not a surprise since the PS5 can run graphically demanding titles. Check out the Gran Turismo 7 review over at JoyFreak to see what we’re talking about!

All in all, Dynasty Warriors 9: Empires is unfortunately disappointing in many aspects. While the game provides a ton of content, a decent story, and highly enjoyable gameplay, the  depressing amount of technical issues weighed the game down.

Dynasty Warriors 9: Empires is unfortunately disappointing in many aspects. While the game provides a ton of content, a decent story, and highly enjoyable gameplay, the  depressing amount of technical issues weighed the game down.

The evocative gaming sound effects that take us back in time