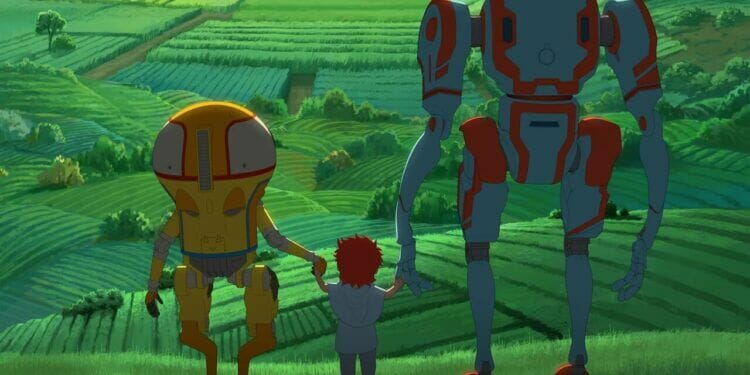 Milan Records recently announced the May 28 release of the EDEN soundtrack by composer Kevin Penkin (Tower of God, Made in Abyss).  Available for preorder now, the album features music for Netflix’s latest original anime series, which follows the last remaining human girl as she navigates an unfamiliar robot-inhabited world.  Making its debut alongside the album’s pre-order today is lead single “Penrose Steps, A.I. Bloom.” Created by Justin Leach (Ghost in the Shell 2) and directed by legendary director Yasuhiro Irie (Fullmetal Alchemist: Brotherhood), Eden debuts on Netflix Thursday, May 27.

“Eden is one of those projects that I will cherish forever. The love put into this project not only from the team, but also the musicians, is humbling. Being able to work with people who gave so much trust in the direction of the music is something I will forever cherish. Please enjoy the unique world of Eden, as we combine the unique worlds of a 3D-printed 6-string violin, female voices and electro-acoustic sound-sources. We have tried to put our best foot forward to honor the amazing work of this team.”

Thousands of years in the future, a city known as “Eden 3” is inhabited solely by robots whose former masters vanished a long time ago. On a routine assignment, two farming robots accidentally awaken a human baby girl from stasis questioning all they were taught to believe — that humans were nothing more than a forbidden ancient myth. Together, the two robots secretly raise the child in a safe haven outside Eden.

Kevin Penkin, based in Melbourne, is a BAFTA-nominated composer for Japanese animation and video games. He is best known for composing the award-winning score to Made in Abyss, and the music to the BAFTA award-winning game Florence.

Kevin moved to London in 2013 to complete a Masters degree in Composition for Screen at the Royal College of Music. During this time, Kevin collaborated with legendary video game composer Nobuo Uematsu on a number of Japanese video game titles, which eventually led him to break into the Anime industry. After releasing his breakthrough score for Made in Abyss, Penkin continued to compose music for Japanese animation, with scores for both The Rising of the Shield Hero and Tower of God.

Throughout his career, Penkin has recorded with orchestras around the world. Works of his have been recorded in Prague, Vienna, Macedonia, Boston, Nashville and Australia. He has also collaborated with acclaimed singers Takeshi Saito, Emi Evans and Raj Ramayya.

What do you think of EDEN? Are you interested in in the soundtrack? Let us know your thoughts in the comments section below.